Home>Different countries>Flag of Nauru: photos, history, the value of the state flag colors of Nauru

Flag of Nauru: photos, history, the value of the state flag colors of Nauru 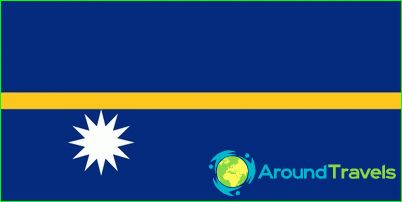 Flag of the Republic of Nauru officially adopted as a symbol of statehood in January 1968, when the country gained independence.

Description and proportions of the flag of Nauru

The cloth of the flag of Nauru has the traditional formfor the majority of the flags of independent states on the political map of the world. Side of the rectangle correspond to each other in a ratio of 2: 1. The national flag of Nauru on the law of the country can be used on land only by official institutions and on the water - the state courts. Individuals, armed forces, private vessels and commercial purpose fleet have the right to raise the state flag of Nauru for its own purposes.
The flag of the Republic of Nauru flag has deepblue color of its primary fields. Its horizontal yellow stripe separates the narrow, forming two equal width and area of ​​the flag. In the lower field at close to half the shaft is placed a white star with twelve rays.
The blue color of the flag symbolizes the endlessPacific Ocean, which is located in the state Noir. Equator on the flag denotes a yellow stripe and a star - is the island itself, which is only 42 kilometers south of the line that divides the planet in the Northern and Southern hemisphere. The number of rays the star designated peaceful existence on a small island of the twelve tribes.
Flag Colors Noir repeated and on the arms of the country,created in the year of independence. The main motive of the coat of arms - heraldic shield divided into three parts. The upper half of it - it is a wicker box, made in yellow, which has a symbol of alchemy. It means the mineral phosphorus, and its appearance on the arms of Nauru due to the fact that on the island in the past developed a large phosphorite deposits. The lower part of the coat of arms is divided vertically into two fields, one of which depicted the frigate sitting on a red pole, and the other - a branch of a flowering plant.

The smallest island nation in the world,Nauru annexed in 1888. Germany and the flag of the country was considered the German tricolor. During the First World War, the island took the Australians, and have begun to actively develop here phosphorite deposits. In 1923, the state acquired the status of mandated territory of the League of Nations, and flag it for all these years has been a blue flag with the symbol of the British in the upper quarter near the staff.
The struggle for independence of the country was developed in the 1950s and led to the attainment of sovereignty and the new flag of an independent state in 1968. Since Nauru flag is not changed.