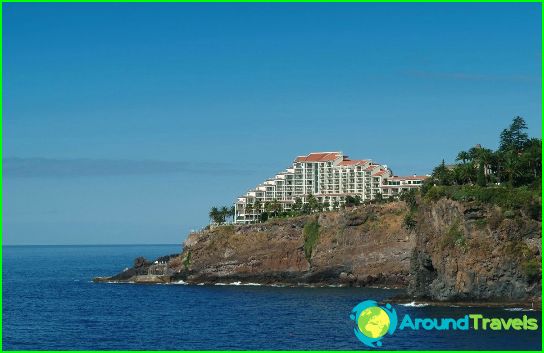 State flag overseas specialTerritory of New Caledonia since 1853 is the French red-white-blue tricolor. In 2010, New Caledonia adopted the flag, considered a symbol of the national front before. It can be officially used throughout the state on a par with the French flag.

Description and proportions of the flag of New Caledonia

Flag of the Kanak Liberation Front,Now declared a state is a rectangular cloth, whose width is two times less than its length. It is divided horizontally into three absolutely equivalent parts, each of which has its own color. The upper band of New Caledonia flag - blue, the middle is painted in light red, and the bottom - green. On the part of the flag adjacent the flagpole, is an image of the country's national symbol. In the round yellow disc, located equidistant from the top and bottom of the flag, inscribed a kind of totem peoples living in New Caledonia. This hand to decorate the rooftops of the population of the island nation. she is depicted on a black flag in the yellow field.
Decoration typical home Kanak peoplepresent on the country's coat of arms. It is a stylized image of a black nautilus - mollusk, widespread in New Caledonia waters. Over the sink depicted cylindrical pine growing on the islands, and next to it - the arrow from the roof of Aboriginal homes. All symbols on the emblem of New Caledonia based on the stylized image of sea waves, executed in the form of two wavy lines. Coat of arms of New Caledonia is made in black.

Until December 2010, the State flag of NewCaledonia was considered a French flag, which has declared the island to its overseas possessions in the middle of the XIX century. Officially, this status was confirmed only after a century, and today, New Caledonia, according to the results of the referendum, not even trying to get votes for independence and the preservation of the French authorities.
State Flag of New Caledonia todayThey are two cloth. They are the same in all situations and can be used for all purposes on land and on water. By law, they can be lifted and citizens, and organizations, and private vessels and the state fleet.