Nicaragua Flag photo, history, meaning of colors of the state flag of Nicaragua 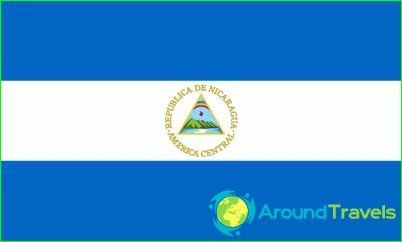 Nicaraguan flag officially adopted in September 1971. Along with the coat of arms and anthem, he is an integral part of the state status.


Description and proportions of the flag of Nicaragua

The rectangular shape is typical of the flag of NicaraguaMost flags of independent nations of the world. It refers to the length of its width in a ratio of 5: 3, and the flag field is divided horizontally into three equal in bandwidth. The upper and lower bands on the flag of Nicaragua have a bright blue color, and the average part - white. In the center of the cloth on a white field at the same distance from the edges of the flag affixed the emblem of the country - the official coat of arms of Nicaragua.
Coat of arms on the flag of the country was first established in 1823year as the emblem of the United Provinces of Central America, which included the territory of modern and Nicaragua. For a long time its existence, the appearance of the coat of arms somewhat changed, is 1971 not the final version was adopted.
Triangular field emblem - a symbol of universalequality sought by the people of Nicaragua, five mountain peaks - is volcanoes, symbolizing the union of the five Central American countries. Rainbow over the mountains - a symbol of peace and tranquility, and the red Phrygian cap reminiscent of the desire of all progressive mankind for freedom.
According to the law on the country's national flagNicaragua, it can be used for all purposes on the water and on land. He raised and government institutions and civilians. Nicaragua flag on flagpoles rises from the military and merchant ships and military bases of the Army.

The history of the flag of Nicaragua

In the 20-ies of the XIX century, the State of Nicaragua entereda part of Mexico and its flag was the flag, almost identical to today's flag. It differed only slightly different logo. In 1852, the country raised the flag, which had three horizontal stripes of different colors - white, yellow and red. In the center of the flag depicted a green mountain. This flag lasted only three years, and he was replaced by yellow-beige-white tricolor.
In 1858, Nicaragua became the flag againwhite and blue flag, which again changed the yellow, white and beige. Nicaragua is perhaps the only country in the world, the national flag which is so repeatedly changed for 150 years.
In the early twentieth century, today's version took the state symbol, which again and finally approved in 1971.