Niue Flag photo, history, meaning of colors of the state flag of Niue 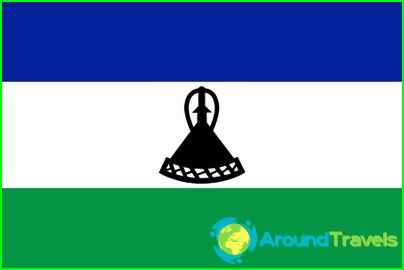 State Flag of Niue, a small island nation in the Pacific Ocean, was adopted in October 1974.

Description and proportions of the flag of Niue

The shape of the flag of Niue is typical for the absolutethe majority of states on the political map of the world. The cloth is a rectangular flag, and its length and width are related to each other according to a ratio of 2: 1. Flag of Niue can propably use by both private individuals and official bodies and public authorities for all purposes on land.
The flag Niue flag - a rectanglebright yellow. In the upper left quarter of the rectangle inscribed in Kryzhi UK flag. In the center of the British flag is a round blue disk that hosts the image is a yellow five-pointed stars. On the broad red bands of the British flag are four yellow stars smaller.
The Law on State Flag of Niue said,that yellow box - is a tribute to the deep sympathy of the inhabitants of the island to the citizens of New Zealand, under which is a protectorate of Niue since 1901. The central star on the British flag symbol of the island of Niue in the middle of the ocean waters, while the four smaller stars - the constellation of the Southern Cross.
The colors of the flag of Niue are present and on the country's coat of arms. It is a heraldic shield, divided into several fields. In each part, a stylized image of important subjects of islanders and symbols. The upper left corner contains the red stars of the Southern Cross on a blue background. Top right on a red field - golden lamb, and under it on blue - crossed implements peasant-farmer. Bottom left is located sheaf image, and the central part of the shield given to images of sailboats on a white background. The shield is held by representatives of the two peoples. Right - the native of the island of Naue, and the left - the representative of New Zealand with the country's flag.

The history of the flag of Niue

Flag of Niue was developed and adopted after receipt ofnational independence and the entry into a free association with New Zealand. Previously considered a classic flag Niue flag adopted by Britain for its overseas territories.

Rent a car in the Seychelles. Car rental in the ...