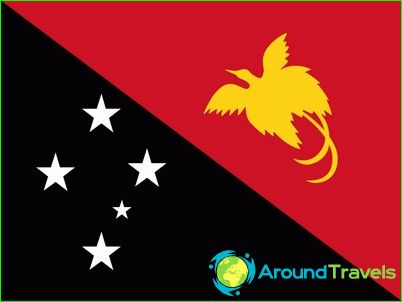 For the first time the flag of the Independent State of Papua - New Guinea was officially lifted in July 1971.

Description and proportions of the flag of Papua - New Guinea

Flag of Papua - New Guinea has the shape of a regularquadrilateral, the length and width of which correspond to each other with a proportion of 4: 3. Flag The flag is divided into two equal squares diagonally from top to bottom and left to right. The triangle with the base at the hoist side is black. In his field of applied five white five-pointed stars of various sizes that form the constellation of the Southern Cross. Golf flag at the free edge - bright red. It shows the gold flying in the direction of the flagpole bird of paradise.
Red and black - are two colorspopular among the natives of the island of New Guinea. Bird of Paradise - a totem of many tribes of Papuans, and the Southern Cross - a constellation, which is considered the most important in some nations of the Southern Hemisphere.
Bird of Paradise can be seen on the emblem of the country. She is shown seated on the drum Aboriginal and represents a single nation and a peaceful life on the island since independence. Spear behind the drum - a symbol of the people of Papua - New Guinea is ready to defend its sovereignty and prosperity of any aggressor.
Flag of Papua - New Guinea can be used,in accordance with the law of the land, for all purposes on land. It can be raised and the public authorities and citizens, as well as owners of private boats and ships. The flag is enabled for use and commercial vessels. It can be seen on the military installations on land.
For the Navy, Papua - New Guinea developed their own flag. He is a white rectangular panel, the upper quarter of which is located near the staff - it's the national flag.

The history of the flag of Papua - New Guinea

Captured in 1880 by the Germans, the territorycontemporary Papua - New Guinea from 1885 to 1914 used the flag of the German Reich as a state. It was a horizontal tricolor with a black, white and red stripes of equal width.
In 1914, the country was placed under controlAustralia and was a ward of the United Nations territory. Flag has become a classic British, and later - a blue banner with the British flag in Kryzhi at the top of the hoist and the emblem of the country in the right half.
In 1971, artist Susan hareh CARICOM project Papua flag was created - New Guinea, which was adopted and raised shortly before independence.

Children's camps in Mordovia in the summer. Children's ...