Flag of Saint Kitts and Nevis 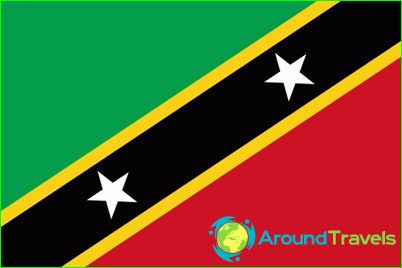 The national flag of the Federation of Saint Kitts and Nevis was first raised in September 1983, the day of the proclamation of independence from Britain.

Description and proportions of the flag of Saint Kitts and Nevis

For a long time, the state of Saint Kitts and NevisIt was a colonial possession of the United Kingdom. Its flag is the dark blue flag, which is in the upper quarter, located near the staff, settled the British flag. These flags were typical of all colonial possessions of Great Britain, and differed only in the form of the emblem on their right side.
In 1967, the country received the statusassociated with the UK territory and its first flag was a tricolor flag, divided vertically into three equal fields. Flagstaff has housed the green, then yellow, and went further - bright blue. After a few months on the flag of Saint Kitts and Nevis, added a stylized image of a palm tree in black on a yellow strip. So it lasted until 1983, when as a result of independence, a new flag was adopted in the country, which has become public and are not changed until today.

Iran Airports - a list of international airports in Iran