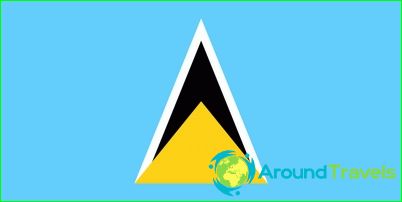 National symbol Flag of Saint Lucia was adopted and raised for the first time in February 2002.

Description and proportions of the flag of Saint Lucia

Flag of Saint Lucia has a classic rectangularshape, like most independent countries flags on the political map of the world. Its length exceeds the width of exactly twice. According to the law of Saint Lucia flag can be raised for all purposes on land. Flag of Saint Lucia are allowed to use and private parties, and the public authorities of the country. On the water, the cloth can raise private craft and trade of Saint Lucia fleet.
The main color of the flag of Saint Lucia flag -light blue. In its general background in the center of the rectangle to apply a triangular shape. Isosceles triangle black has a white edging on their vertical sides. The base serves as its base the second yellow triangle, the apex of which is located in the middle of the first height.
The symbolism of the flag of Saint Lucia is quite simple. Blue box - this is the Caribbean Sea, which is located in the island nation. Triangular shapes symbolize the two mountains on the island. It is the top of the array of the Pitons, which are the business card of Saint Lucia. Yellow color on the flag state is reminiscent of the sunny climate, and the black and white color - on a peaceful neighborhood Negro people and European races living in Saint Lucia.
The blue color of the flag of Saint Lucia and repeats itscoat of arms. The emblem was adopted in its present form in 1979 and is a heraldic shield, which hold Blue-faced Amazon. This type of parrot is particularly prevalent in the islands, and the feathers on the head and back of the birds are the very soft blue hue of the main field of the flag of Saint Lucia. Shield Field darker color and repeat the previous state symbols.

Saint Lucia has long been overseasBritish colonial territory and used as the national flag blue flag. In the upper left quarter of the British flag was placed and the right half - coat colony. In February 1979, the country gained independence, and chose the way of development.
It was then that he saw the light of the first version of the flagSaint Lucia. It differed from the present very low. The color of his main field was a slightly different shade - darker and more saturated. This Saint Lucia flag was used until 2002 and was changed to the current version.