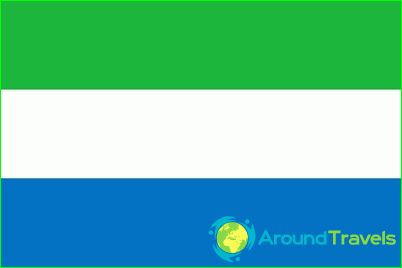 The national flag of the Republic of Sierra Leone, the draft of which presented the Heraldic Chamber of the country, was adopted in April 1961.

Description and proportions of the flag of Sierra Leone

Rectangular flag of Sierra Leone flagIt is divided into three horizontal strips of equivalent width. The upper part of the flag is light green tint, the average field - white and the bottom band - bright blue. Length Sierra Leone flag refers to its width in the proportion of 3: 2.
The green color in the flag of the Statereminiscent of the rich nature of Sierra Leone, its mountains and rivers. In addition, the green symbolizes the agricultural sector, which plays an important role in the economy. The blue color of the flag of Sierra Leone - the hope for a brighter future and a belief that the most wonderful times just around the corner. The white cloth symbolizes the field of law and order, which unite the inhabitants of the Republic in their quest for progress.
Sierra Leone flag and colors are repeated on the armscountries. It depicts two golden lion, standing on their hind legs and holding a shield with the image of the third of a lion on a background of green field. Above him - three burning torches, and below it - a stylized image of the sea. Mountains on the shield - a mountain lion, after which the country was named.
State flag of Sierra Leone can beused for all purposes on land, including, as the civilian and military. It shall have the right to raise the civil and commercial and commercial vessels. For the Navy of the country there own flag, which is a white rectangle. His upper proximal to the shaft occupies a quarter of the image of Sierra Leone national flag.

The Republic of Sierra Leone gained independence fromBritish colonial rule only in 1961. In the years depending on country of use typical of all colonies of Her Majesty's flag. It was adopted in 1916 and is a rectangular cloth of blue, in Kryzhi near the staff who place the image of the flag of Great Britain. Right at the former flag of Sierra Leone deposited coat of arms representing a heraldic shield on white background circular disk.
In 1960, a few months beforeHeraldic independence Sierra Leone Chamber presented the flag and coat of arms of the projects, which were successfully adopted by the parliament of a sovereign state.