Home>Different countries>Flag of Somalia: photos, history, the value of the state flag colors of Somalia

Flag of Somalia: photos, history, the value of the state flag colors of Somalia 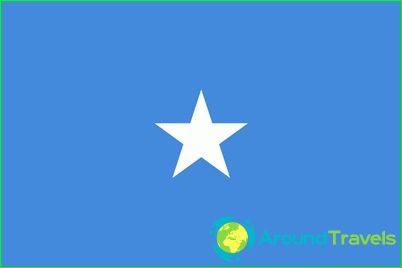 The flag of the Somali Republic was approved as a national symbol in 1960, when the country became a member of the United Nations Organization.

Description and proportions of the flag of Somalia

Somalia Flag has a classic shapequadrilateral, the length of which relates to its width in a ratio of 3: 2. Main flag field - bright blue. It is a white five-pointed star in the center. Blue background on the flag of Somalia - a tribute and thanks the United Nations, with which the country has managed to gain independence and sovereignty of Italy, under whose protectorate state of Somalia was in the late XIX century.
The five points of the star on the flag of Somalia indicatefive historical areas, where representatives of the Somali tribes. This former British colony and Italian Somaliland and countries Ethiopia, Djibouti and Kenya.
The white five-pointed star on a blue background - abase coat of arms to Somalia. It is a heraldic shield, a field which follows the flag of Somalia. Shield outlined gold border, over its apex is the crown of gold. On each side of the shield is supported by two leopards, standing on its hind legs. They rely on crossed spears and palm leaves.

The history of the flag of Somalia

Modern state flag of Somalia completelyidentical to the cloth that served as a symbol of Italian Somalia, and was approved in 1954. Today, the country is divided into several areas, including the federal government controls little more than half. There are public entities, which obey their own laws and have their characters in the rest area.
Flags formations Galmudug and Northland are identical to the flag of Somalia.
Puntland is a tricolor flag, towherein the three horizontal strips of equal width have different colors. The upper band - blue with a white five-pointed star in the center. Average - white, and the lower part of the flag state of Puntland education - green.
In the formation of Somaliland has a tricolordark green, white and dark red stripes. The upper green box inscribed with Islamic slogans, the average white - includes a black five-pointed star, and the lower part - a dark red.
Public education Jubaland in Somaliaflag is divided vertically into two equal fields. Near to the shaft of the flag - bright red, and the free edge - light green. In the center of the flag on the border between the two parts of the flag is applied to a white five-pointed star.

Children's camps in Samara region for the summer. ...