Home>Different countries>Flag of Togo photo, history, meaning of colors of the national flag of Togo

Flag of Togo photo, history, meaning of colors of the national flag of Togo 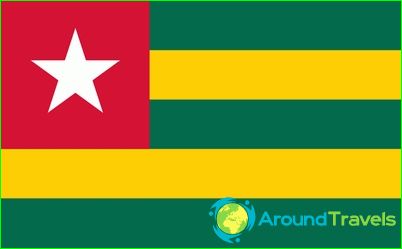 The current flag of the Togolese Republic has beenformally adopted in April 1960 after the country gained independence. According to the Togolese constitution, adopted and approved in 1992, the flag is as follows: the national flag of five alternating green and yellow strips. In the upper left corner is a white star of regular shape against the backdrop of the red square, which occupies 3/5 of the flag's width.

This version - the idea of ​​the Togolese student FieldsAhiyema. Each color has its own meaning. For example, under yellow meant national unity, as well as the wealth of the country's natural resources. Green stands for hope and the importance of agriculture for the life of the country. Red, which is very traditional, a symbol of Togolese blood shed for independence during the war and the one that can still be shed defenders sons in the further struggle. White color in this case is the set of values, including wisdom, peace and dignity. The star is the image of purity and life, and is also used as a reminder of the country's national dignity. The number of stripes was chosen by chance, because Togo has five administrative regions.

Initially Togo flag looked completely different. In the early 20th century., When the territory of the country and other tribes coast of the Gulf of Guinea were under the power of the German Empire, the entire union was named Togolandom. In 1914, a series of flags and coats of arms for the subordinated territories was developed. In particular Togo flag was supposed to do based on the black-white-red national flag of Germany with a shield containing the symbol of the country itself. Togo were to symbolize the palm and two snakes in a silver field (although the coat is made mainly in green color). However, these plans were not destined to come true because of the outbreak of the First World War.

By 1914, the entire territory of Togo was captured by the British and the French, and until 1922 was under their joint authority. But in 1946 the United Nations intervened by making the state of the ward area, but leaving the control in the same invaders. When, in 1957, Togo has teamed up with the Gold Coast, it was called the Republic of Ghana, where the green flag with two white stars and the French flag was adopted in the left upper corner. But in 1960 the United Nations proclaimed the independence of the country, after which the competition was held for the best version of the new flag.

The capital of Lesotho map, photo. What is the capital city in ...