Home>Different countries>Flag of Tuvalu: photos, history, the value of the state flag colors of Tuvalu

Flag of Tuvalu: photos, history, the value of the state flag colors of Tuvalu 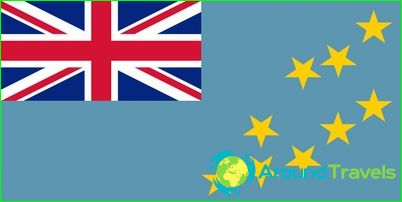 In October 1978, the national flag of Tuvalu has been approved as a symbol of the country along with his coat of arms.

Description and proportions of the flag of Tuvalu

Rectangular flag flag of Tuvalu -the classical form of flags of independent nations of the world. Its length and width are related to each other according to a ratio of 2: 1. The main field of the flag of Tuvalu bright blue. The top quarter closest to the flag of Great Britain entered the shaft, under whose protectorate in 1892 turned out to be an archipelago. On the right side of the cloth are nine five-pointed star, symbolizing the atolls that make up the archipelago of Tuvalu. Location of stars on the flag follows the geographical location of islands in the Pacific Ocean. The blue color of the flag - a boundless ocean.
Flag of Tuvalu on the law of the country can beIt used both on land and in the water for any purpose. It can raise the citizens and the state institutions, the army and navy, the civil court and the merchant navy.

The history of the flag of Tuvalu

Under the protectorate and colonialDepending on the UK, the government of Tuvalu flag used as a typical panel, adopted in British overseas possessions. On a blue field in the upper quarter near the staff fit UK flag, and was located on the right half of the coat of arms of Tuvalu.
In 1978, the modern flag was adopted Tuvaluwho was on the flagpoles before 1996. Then Prime Minister Latasi introduced a new state symbol in order to initiate the process of changing the political system and the abolition of the monarchy. According to his plan, Tuvalu had become a republic, and flag design proposes a wide central blue stripe running horizontally and separated from the upper and lower fields of red thin white stripes. To the left of the flagpole on the blue field, hit an isosceles triangle white coated with a coat of arms of the state. To the right of the flag cloth placed eight five-pointed stars of white color: two - on the red field and four - on blue.
This flag Tuvalu lasted about one and a halfyears and caused a negative reaction among the population. They demanded to return to the previous symbol flagpoles, and monarchical authority of Her Majesty to leave untouched. In April 1997, the new prime minister took his place in the government, and the former flag of Tuvalu - a place on the flagpoles.

Where better to relax in the Canary Islands. Where to go ...