Home>Different countries>Flag of Vanuatu: photos, history, the value of the state flag colors of Vanuatu

Flag of Vanuatu: photos, history, the value of the state flag colors of Vanuatu 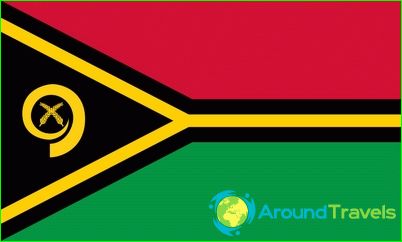 State of the Republic of Vanuatu flag was hoisted for the first time in the sky, in February 1980, six months before the proclamation of an independent country.

Description and proportions of the flag of Vanuatu

Vanuatu flag rectangular panel has classical proportions adopted in many countries. The length refers to the width of a 5: 3.
Rectangle flag is divided into three parts figureyellow, repeating outlines short letter Y rays which begin near the corner near the staff and long rests in the middle of the free edge of the flag of Vanuatu. The triangle formed by the short letter the Y rays, is black. Around the rim of yellow rays passes equal to the width of the beams, and black. The top field flag - red and pink, and the lower - medium green color. On the black triangle at the hoist side coated in yellow stylized boar tusk symbolizing the welfare of the locals and serves a totem. Inside it - crossed fern leaves, meaning the islands peaceful intentions.
Flag of Vanuatu can be used according to the lawscountry for all purposes on land. It is allowed to pick up and the citizens and officials, and civic organizations. Flag of Vanuatu land use and the armed forces of the country. On the water the cloth have the right to raise a private jet, the merchant navy and civilian fleet Vanuatu. For the state of the Navy developed and used a special flag.

The history of the flag of Vanuatu

The islands, which are located in the StateVanuatu, have long been a subject of controversy in France and the UK. Initially, the convention was signed, according to which proclaimed the co-administration of the archipelago New Hebrides. Flag naval commission appointed in 1887 for doing business, looked like a rectangular panel divided into two equal parts vertically. The left is a white box, and on the right - red. In the center of the flag was inscribed in a blue rectangle with five white stars.
In 1906, the political situation is somewhatIt has changed, and the flags of the New Hebrides became both the French and the British colonial government. This was due to the fact that the island proclaimed co-ownership of the European powers.
Vanuaku party began in 1974, active in the fightfor the independence of the country. The colors of the flag Vanuaku parties were red, yellow, black and green. She led the country to independence and in the modern sovereign flag of Vanuatu were her colors, in recognition of the merits of the party.