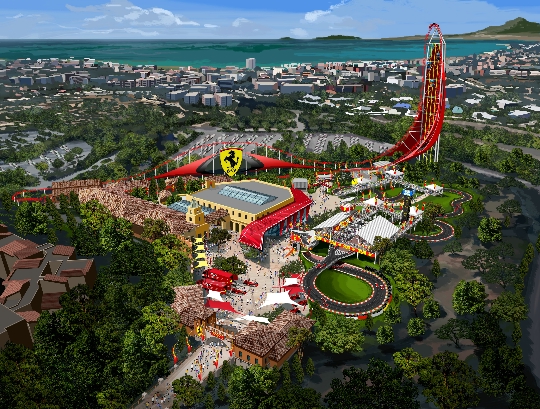 Chris Perry - leading the new show "Unbelievablerides "on the entertainment channel travel Travel Channel - travels around the world and is testing a variety of attractions. Chris - a real expert and knows all about the fun: for 15 years he worked as a manager in one of the largest amusement parks in Dubai. The new program, he will introduce the audience with the latest scientific and technical achievements in the field of entertainment, as well as exploring the most dangerous and breathtaking roller coaster ride! If you love the adrenaline as well as Chris Perry, we suggest you travel back with him to different parts of the world and ride with the breeze. All fasten your seat belts!

Ferrari World - the biggest indoor parkentertainment in the world, located in hot Abu Dhabi. It covers an area of ​​86,000 m2, the equivalent of 10 football fields! Spread across thousands of square meters, it is the Arabic architectural masterpiece admired even far from the world of the visitors car. Ferrari World roof designed by world-famous architects Benoy Bureau based on Ferrari GT profile. It is decorated with a huge logo, perhaps the largest of all ever created by its history of existence. To keep the design used over 12 tons of iron, which would be quite enough for the construction of two Eiffel Towers. The main attraction here - a roller coaster Formula Rossa, the fastest in the world in just 5 seconds, it has a top speed of 240 km / h! This will allow local landmark brave to test their nerves and feel all the congestion experienced by pilots of Formula 1.

But even if this is not enough to bring a slideadrenaline, the visitors should be sure to visit the Atlantis water park in Dubai and to test its main attraction "Tower of Poseidon." Its height is 40 meters, it is considered the highest waterslide in the Middle East. All of its charm lies in the vertical descent after a few relaxing and turns monotonous and of snakes, so the visitor usually does not even suspect what awaits him. The "Tower of Poseidon" is considered absolutely safe attraction, the creators of slides assure that even a child can ride on it.

Another interesting fact is that the construction of suchEntertainment organizers had to spend big - "Tower Poseidon" cost them US $ 27 million and is considered one of the most expensive in the world of water slides. In addition, the water park has a lot of interesting and exciting activities: here you can scuba dive in a pool with marine animals and fish (of which there is, by the way, about 65 thousand!), Canoeing on the longest artificial river, the length of which is 2 3 km, as well as plenty of nakupatsya in pools with waves and waterfalls. And if the holiday falls on the birthday of the visitor, then feel the "power" Poseidon absolutely free.

Cedar Point - one of the oldest parksentertainment in America. The history of the park dates back to the mid-19th century, when the southern shore of Lake Erie was one of the most popular holiday destinations in the United States. The first prototype of the park was built here in 1870. At first there were only a few baths and a beer garden with a small dance floor, and then there were wooden walkway with picnic tables. In the park you can get on ships that plied back and forth. At the same time, a large pavilion was built in the park, which includes a two-story theater, a concert hall and a photo studio.

The first roller coaster was opened in thePark in 1892 and was called Switchback Railway. It had a height of 7.6 m, and train a top speed of 16 km / h. Hill worked exclusively under the influence of gravity, and trains often do not get enough momentum to go back to the station, so the staff (sometimes with the help of horses) were forced to hold out or "dotalkivat" train to the station. But today the park has on its territory a record number of attractions in the world, namely 72! One of the most popular attractions - Power Tower, which is a rectangular structure 90 meters. In each of the columns is the construction area with seating, which moves up and down. Two sites of attraction work for growth - they are planted up with the speed of 96 km / h and then fall down. Two others, on the contrary, start out on top: first, they slowly rise to the top and then, with an acceleration of 96 km / h, down sharply lowered. Get real "speed" swing. It is here that will be able to experience the sensation of weightlessness and free fall! Although the flight lasts only 40 seconds, the impressions of a visit to this attraction will last for a long time.

Cedar Point visitors should definitelytry Raptor attraction. The whole point of this attraction is that the cabins in which passengers travel, are suspended from the bottom of the rail and are not fixed at the top, as is the case with most roller coasters. As a result, passengers legs dangling above the ground, and they have a feeling of free flight. During the movement takes place 6 turns upside down, and one spiral.

The most frightening amusement park consideredWicked Twister. Hill has a record height of 62 meters and has appeared in the park recently. The attraction consists of 2 interconnected, curved and twisted around its axis towers 65 meters high each. When climbing the tower train makes several turns around its own axis is stopped at the top, then rushes down again, making a few turns. The trip takes about 30 seconds with a maximum speed of 115 km / h. During this time, the train makes 5 ascents and descents. This slide has broken 10 world records at once: it was the fastest, highest, longest and most extreme on overload. In 2006, she won second place in the list of best attractions in the world. Building a roller coaster park cost $ 20 million, but it was worth it. In the first season after the opening it was visited by about 5 million people. Today, Cedar Point - it's not just an amusement park, it is also a popular holiday destination. This small peninsula has everything you need for leisure time: cinema, numerous restaurants and cafes, boat station, cable car and even a hotel.

Busch Gardens - amazing place for loversextreme! This is one of the largest amusement parks, and it is decorated in African style. Amusement park was opened March 31, 1959 in southwest Florida, 12 km from downtown Tampa.

In addition to the attractions in the park is home to more than 2000animal species, so Tampa is also the owner of the largest zoo in the United States. Today - this is the fourth in the US park's popularity. And visitors will Adventures: somewhere waterfalls and rivers, where a jungle or savannah with their wild inhabitants. Throughout the park, you can ride on the monorail and cable car or, for example, on a train with open carriages.
Amusement Park Busch Gardens is in greatthe success of not only Americans, but also attracts tourists in large numbers, here are the highest, steep and breathtaking roller coaster. Busch Gardens consists of eight parts, each dedicated to one of the African countries: Egypt, Congo, Nairobi, Timbuktu, Morocco, Jangal, Stenlivill, Bird Garden, and the Serengeti Plain
For all those who love the thrill of the parkThey operate the most modern rides and incredible roller coaster. For example, the famous attraction SheiKra, which has a height of over 60 meters with angles of 90 degrees. Another attraction of the park - Montu attraction - one of the tallest inverted roller coasters in the world where you can ride on the back loop and 20 m vertical loop at a speed of 100 km / h.
In the park, all visitors can take a ride on the trainsample of the XIX century, to swim the rapids of the river Congo, to visit Egypt (the tomb of Tutankhamun), see the unusual architecture, see wildlife and exotic plants, as well as a walk through the jungle!

But the most interesting in the Busch Gardens starts atwhen Halloween is celebrated across America. At this time, the park changed its name to "Howl-O-Scream" ( «Howl and cry"). There is a night of horror rides that run through the cave, where you can see these bats, lizards and snakes.

Famous throughout Europe for the extreme "ThorpePark »(Thorpe Park) is ready to welcome all those who wish to experience a rush of adrenaline and a lot of emotions every day from March to November. It is certainly worth a visit - water sports, fear of the room and 4D-popular attractions!

Despite the fact that the park is belowcity ​​(Surrey), to reach it easily. For half an hour the shuttle bus or train and depart from Waterloo station in the heart of London, will take to the park.
To date, 28 modern amusement park, 7 of them - crazy roller coaster, 5 - water attractions. Also in the park found a large number of slot machines.
Entertainment "Thorpe Park" designed for children from12 years old and adults. For the younger audience rides will not work, they are too extreme, because most of them are just "fly" and the corners sharp turns up to 90 degrees.

Airport in Gdansk: diagram photo. How to get ...