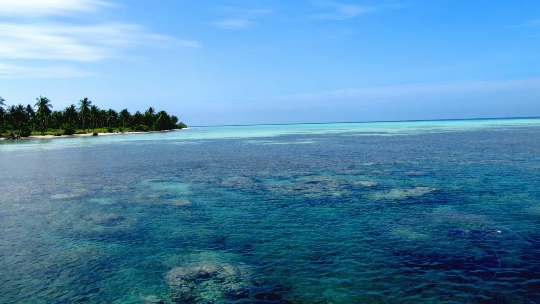 Java Sea in the Pacific Ocean and washesshore islands of Sumatra, Java and Kalimantan. Map of the Java Sea shows that it is an inter-island. On the Indian Ocean, it connects the Sunda Strait. Java Sea came back in the Ice Age. The bottom of the pond is covered with silt and sand. The islands are flat, but very rugged coast with mangroves. Sea received the designation because of the island of Java. The main passages are Macassar and Sunda, the depth of which does not exceed 200 meters. Therefore, the water exchange occurs only in the upper layers.
Along the coast runs a shallow area wherehome to many marine animals. The waters of the sea are ideal for the existence of different species of fish. Scientists have identified about three thousand species of marine life. South herring, tuna and flying fish are the target species. Java Sea is considered to be more shallow than in neighboring seas. It occupies a small area - about 310 thousand square. km. Maximum deep place that managed to find -. 1272 m average depth does not exceed 110 m.

Seawater warming well thanksequatorial climate and shallow. On the surface of the water temperature is about 29 degrees. Weather on the coast of the Java Sea creates mostly tropical monsoon climate. Humidity is approximately 82%. In the winter over the sea blow monsoon winds coming from the north. Storms are rare. In January, the air temperature is 28 degrees.

In many coastal reef formations,coral polyps, islands and atolls. The coast is covered with white sand. The sea has a flat bottom without sharp fluctuations. Local island densely populated by people. In terms of population, they broke the world record. The most populated island of Java is considered. Local residents are engaged in fishing and tourism. Intensive fishing reduces fish stocks reservoir. Therefore, in recent years the authorities have reduced the rate of fishing. On the islands of Sumatra and Java was introduced a complete ban on fishing in an industrial scale.
The marine fauna is represented echinoderms,molluscs, arthropods, and others. Of the major inhabitants of the deep sea is to provide swordfish, sharks, sea turtles, dolphins, sailboats, and stingrays. Local people busy fishing mackerel, herring, tuna, carangidae, eels, moray eels and sharks. A valuable shark fins are considered prey. Furthermore, pearls are extracted. The main ports of the Java Sea are located on the island of Java. These include Jakarta, Semarang and Surabaya. The islands of the sea take a huge number of tourists every year. The island of Java is famous for its volcanoes, of which there are over a hundred.

Photos of the Java Sea

Children's camps in Europe for the summer. Children's ...