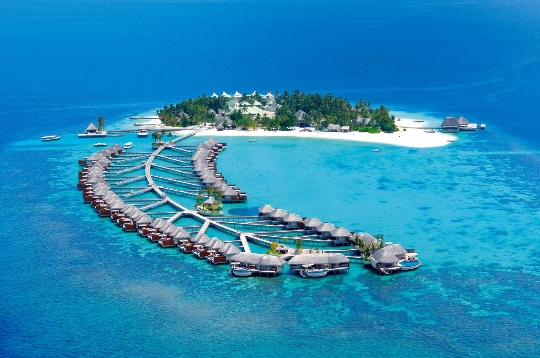 Outskirts of the Indian Ocean off the coast of India andthe island of Sri Lanka has been designated Laccadive sea. In the west, the border runs along the reservoir Laccadives and the Maldives. Addu Atoll is the southern extreme point. From the Indian Ocean Sea Strait connects eight degrees. Laccadive Sea is considered to be a deep, since its average depth reaches 2,000 meters in the south of the depth is even more significant -. 4 km. Near the island of Sri Lanka and the Indian subcontinent seabed is uneven terrain. There are hills and atolls are found up to 4 m. In shallow water, the bottom is covered with sand.

Sea received the designation by nameLaccadives islands. They are an archipelago of 27 coral reefs and atolls. The largest of them - Agatti Island, Kavaratti, Bangaram, Andrott and Kalpeni. The total area of ​​the archipelago is approximately 18 km. sq.

Map displays Laccadive sea climatezone in which the water area. This is an area of ​​domination of a tropical monsoon climate. Frequent changes in temperature characteristic of the weather conditions. On the islands of humidity is 80%. It is very hot in the spring. Summers in this area are hot and long and the winter is mild. In the last days of May begins the rainy season, which lasts until September. The water in the coldest days at a temperature not lower than 23 degrees. In June, its temperature is 28 degrees.

Waters is located away from the main shoppingsea ​​routes. Large-scale fishing is also not being here. Major ports on the coast of the sea Laccadive:. Cochin, Colombo, Mangalore etc. Locals extract clams and lobsters. Of great importance is tuna fishing, horse mackerel, saffron cod, halibut and sea bass.

On the shore for a long time were coloniesEuropeans, so buildings in the European style characteristic of the region. Laccadive Sea gained worldwide fame thanks to the resort on the Maldives. Tourists are attracted by picturesque coral reefs, which are concentrated near the Laccadives and the Maldives. Here come the fans diving and sea fishing.

Coral reefs - the habitat of exoticsea ​​creatures. Favorable climatic conditions cause the wealth of the underwater world. The fauna is represented by a reservoir tropical fish, sea turtles. The islands are many species of sea birds.

History of Warsaw. The base development, occurrence of Warsaw