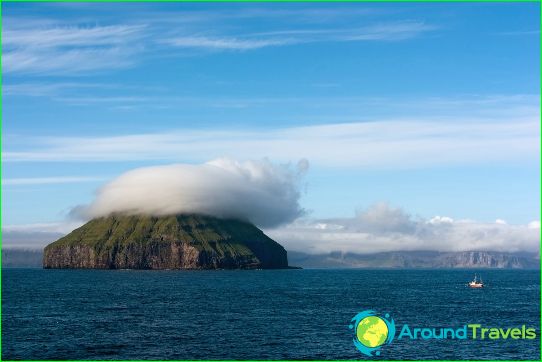 Norwegian Sea refers to the marginal seasThe Arctic Ocean. It stretched between Iceland, the island of Jan Mayen and the Scandinavian Peninsula. The sea occupies an area on the continental slope of Eurasia and is bordered by the North Sea and the Barents Sea Greenland and the Atlantic Ocean. Sea covers an area of ​​about 1,383,000 square meters. km. Its average depth is 1,700 m, and the maximum depth -. 3734 m from the Atlantic Ocean Norwegian Sea separated Shetland and the Faroe Islands, located on an underwater ridge. Off the coast of Norway is dominated by sandbanks.

The sea does not freeze in winter because of the warmNorwegian Current. This feature distinguishes it from other Arctic waters. The warm - a favorable factor contributing to the development of flora and fauna area. Here the flora and fauna is much richer and more varied than in other seas of the Arctic Ocean. Norwegian Sea has a bed in the shape of a bowl with a hollow in the middle. The shelf area has significant oil reserves. Developments underway in the waters of Norway. Sea differ greatly rugged rocky shores. Norwegian Sea Map displays a lot of capes, bays, fjords and braid. Tides in the pond higher - up to 3.5 m.

The Norwegian Sea is located in the northern part of the zonetemperate latitudes. His considerable part occupies a large area of ​​the Arctic Circle. Therefore, it is influenced by the temperate maritime climate. In the Norwegian Sea area there is high humidity, cloudy, slight seasonal temperature fluctuations. Winters are mild, and the summer - relatively warm. In winter, the sky of the blow south-westerly winds, which often turn into the storm. Sometimes the Norwegian Sea is exposed to hurricanes. The largest waves reach a height of 9 m.

The air temperature in the winter ranges from -4 to +4degrees. On the coast of the Norwegian Sea is almost always windy, cloudy, unstable weather. During the summer, the winds subside, and the temperature rises to 10 degrees. In the summer of cloudy days is less, however, it is often observed mists.

In the Norwegian Sea are growing a variety of algae: kelp, fucus, porphyry, and others. Different types of kelp extract in large scale industrial applications. In coastal areas there are all sorts of benthic animals.

Use of the Norwegian Sea

A large part of the sea is ice-freeall year round, although the pond is considered the Arctic. The ice is found only in the winter in areas bordering the Greenland and Barents Seas. In the Norwegian Sea going fishing cod, mackerel, redfish and herring.

Pictures of the Norwegian Sea

Airport Gomel: diagram photo. How to get ...