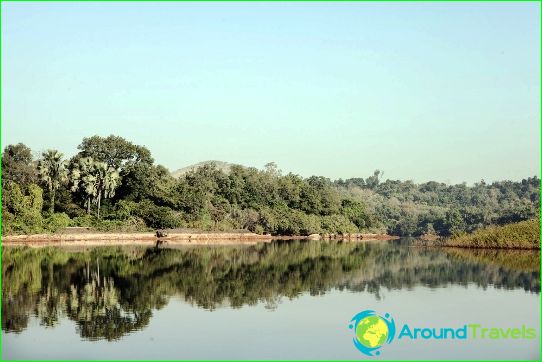 Gambia - very small African state,It had once been one of the most influential throughout the continent. But today, it's just a small area, located on the banks of the same river. The maximum distance between the two borders of the state - a total of 28 kilometers. It was only near the mouth of the Gambia it is extended to 45 kilometers. That is why the Gambia River, as such, no. And Gambia - is a state of the river.

Gambia - one of the major rivers on the West African continent. The bed of the river passes through the territory of three countries - Guinea, Senegal and Gambia. The total length of the course - 1130 kilometers.

The source of the river is located in the Fouta Djallon plateau(Guinea). Place confluence - waters of the Atlantic. The mouth of the Gambia is a estuary stretching for 20-30 kilometers. The upper course of the river has many rapids. But on average it enters the lowlands and continues the path, winding among forests. Floods occur in the Gambia during the rainy season, falling during the period July-October.

The river is navigable for 467 kilometers upstream from the mouth to the city of Banjul. Ocean tides rising up to 150 kilometers from the place of the river with the Atlantic merger.

Gambia plays an important role in national life. She is one of the most important transport routes, "feeds" of local residents engaged in fishing, as well as its water is used for irrigation. Total Gambia together with its tributaries covers 970 square kilometers, and during the flood - 1965 square kilometers. In his mouth, which is located near Cape St. Mary's, The Gambia extends up to 16 kilometers. The depth of the river at this point, reaching 8.1 kilometers.

Beach first hundred kilometers with a smallnavigable section (after the Banjul) river covered with beautiful mangrove forests. Then landscapes are replaced by high and steep cliffs, forested. After that comes the turn of the low coasts with thick grasses. The river is divided into many branches. In the waters of The Gambia hippos and crocodiles are found, and in the mangroves live baboons.

Not far from the confluence of the river is locatedJames Island. It is also called the island of St. Andrew. There is a fort that was used extensively until 1779. Today he is included in the UNESCO list of protected objects.

Children's camps in the Belgorod region in the summer. ...