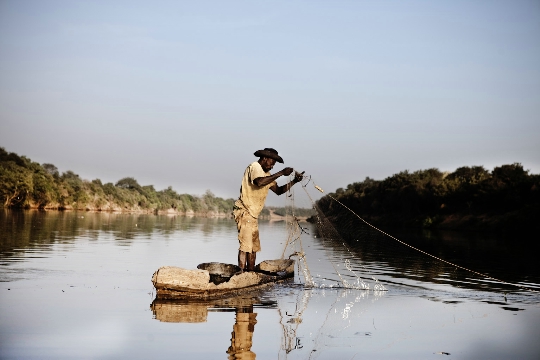 The largest river of Senegal - Senegal, Saloum, Gambia and Casamance.

This is one of the largest West African rivers,the total length of 1970 kilometers. The river bed is a natural border between the two countries - Senegal and Mauritania. The source of the river - the confluence of two rivers flow: Bafing and Bakoy.

The name of the river was due to oldBerber tribe senega once lives on its banks. Europeans first set foot on the shores of Senegal only in 1444. And he became the first Portuguese Dinis Dias.

The main tributaries of the river: Fall; Karakoro; Gorgol. In many river basin conservation areas, in particular, Jute (ornithological reserve), Diavaling (National Park), and others.

Saloum geographically fully located in Senegal. The total length of the channel - 250 kilometers. The last 112 kilometers of navigable flow. The confluence of the Saloum - waters of the Atlantic.

The Saloum Delta is a national park area of ​​76 hectares. In 1981 he was listed by UNESCO as one of the biosphere reserves - there are vast mangrove forests.

The river passes through the territory of Guinea and SenegalThe Gambia. The total length of the river - 1130 km. The source of the river is located in the Fouta Djallon plateau (Guinea). Billabong - waters of the Atlantic, with the river forms an estuary about 30 kilometers wide. In the upper reaches of the river rapids enough, but in the middle and lower reaches calms down.

Shipping are the last 467 kilometers from Banjul and below. The powerful Atlantic tides rise upstream 150 kilometers.

Casamance - West African river locatedin the south of Senegal. The total length of the channel - 320 kilometers. The mouth of the river - the water of the Atlantic Ocean. The flow of the river is navigable for 130 kilometers from the confluence.

Hebe - one of the West African rivers,located on the territory of the two countries: Senegal and Guinea-Bissau. The total length of the channel - 545 kilometers. Current navigable 145 kilometers upstream from the confluence. Mouth Hebe - waters of the Atlantic (Guinea-Bissau territory).