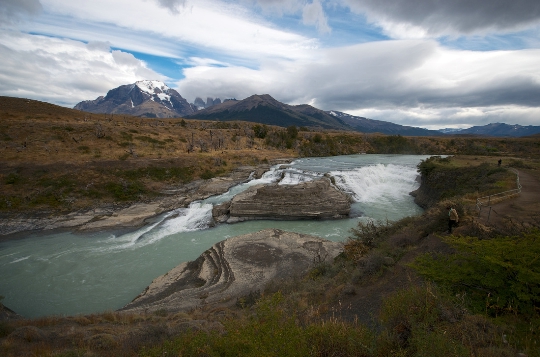 Uruguay - one of the countries of South America. Uruguay rivers belong to the Atlantic basin.

Riverbed - a natural border between the twoStates. The name she was given the Indians, the very first mastered its banks. The word is made up in two words - "uru" and "guay". If you give a literal translation from the language Tupi tribes, the "guay" - is a river, and "uru" Indians called all the birds with bright plumage. And together it sounds like a "river of colorful birds."

The source of the river - the confluence Kaonas and Pelotas inSerra de Mar. In its upper reaches of the river passes through the territory of Brazil, then forms (middle course) a natural border between Argentina and Brazil. Uruguay belongs to all the lower course of the river.

San Salvador is a left tributary of the River Uruguay. The source of the river - the Department of Soriano (near the town of Cardona) on the hill Cuchilla Grande Inferiore.

The bed of the river passes through the territory of the country's most fertile soil. Not far from the confluence of the San Salvador places in Uruguay is the town of Dolores. It is the second largest city in the department.

The bed of the river passes through the territory of the two countries - Brazil and Uruguay. And in Uruguay, it is called Kuareym.

The source of the river is located in the Brazilian state of Rio Grande do Sul (the southern part of it). To be more precise, it is a hill Cuchilla Negra, near the city of Santana do Livramento.

The river bed is part of the boundary separating the territory of the Brazilian state of Rio Grande do Sul and Uruguay Artigas Department. The Uruguay river flows near the town of Bella Unión.

The river is wholly owned by the Republic of Uruguay. The source of the river is located in the territory of the Department of Lavalleja (near the town of Minas). The bed of the Santa Lucia is the boundary between the following departments: FL - Kanelonas; Kanelonas - San Jose; San Jose - Montevideo (at the mouth of the river).

Santa Lucía falls into near La PlataDelta del Tigre, forming a small delta. The total length of the river - 230 km. The main tributaries of the river are San Jose and Chico. In addition to these waters of Santa Lucia take another 200 small rivers.

The river is wholly owned by the country. Source Cebollatí River is located on the hills Cuchilla Grande (Levaleha department). Cebollatí River main tributary - the river Olimar Grande River - flows into its waters downstream. The ultimate way point - Lake Lagoon Mirim. It is Cebollatí River (in most of the flow) natural border dividing the departments of Treinta y Tres and Rocha.

Holidays in Croatia in October: prices and ...

Uruguay Flag photo, history, the value of the state flowers ...