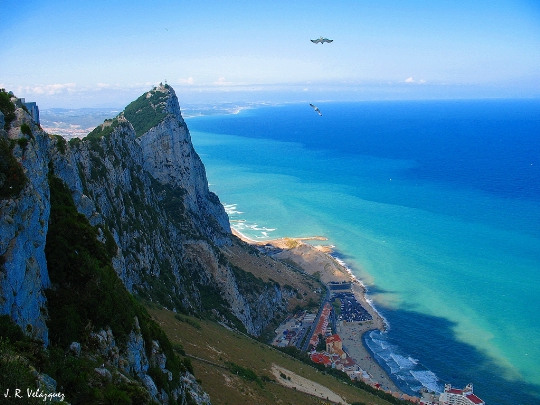 The most western pond in the waters of the MediterraneanSea is the Sea of ​​Alboran. Next to him is spread the Strait of Gibraltar. By convention the eastern border of the sea. It runs on the open waters of the Mediterranean and along the cities of Oran and Almeria. In the central part of the reservoir there is the island of the same name, has a miniature size. Start of the Strait of Gibraltar is considered to be the western limit of the sea.

Alboran Sea map shows that thereno large peninsula and bays. Small island chafarinas located off the coast of Morocco. The seabed has large differences in elevation due to volcanic activity in this area. The largest mountain range is Alboran, which rises above the water as an island. Alboran Sea in the north-east smoothly into the Balearic Sea. Through the waters of the border of the African and Eurasian plates, so the bottom has a lot of cavities. The depth of the depression is the most significant of 2000 m. The region as a whole is considered to be seismically dangerous. At sea, dominated by the circular flow: East and West Alboran spiral. They go in a clockwise direction and considered to be very treacherous for sailors.
The width of the reservoir is about 200 km and the length -400 km. The average depth is 1,500 m. The bottom of the sea has a non-uniform topography. There are ridges and troughs. Alboran ridge divides the waters into two parts: the southern, eastern and western Alboran.

Above the water area has a Mediterraneanclimate. In some places the coast of the Alboran Sea is a strip of valleys in a subtropical climate. Weather is strongly influenced by the Sahara, the Atlantic and the westerly winds. These factors form the special climatic conditions in the coastal zone. It is dry and hot in summer, but rainy and cool winter.

To rule in the region at different timescompeted Arabs, Romans, Spaniards. Today, Gibraltar is under the control of Great Britain and Spain. Alboran Sea is of interest to coastal states due to its strategic location.
Major ports in this sea - Malaga, Melilla,Ceuta. Today, on this sea route passes illegal immigrants from Africa to Europe. In the waters of the industrial fishing takes place:. Anchovy, sardines, swordfish and other cetaceans and striped dolphin are threatened with extinction because of the unfavorable environment. Picturesque coast of the Alboran Sea makes it attractive to tourists. The water is well heated in May, so at this time begins the beach season, which lasts until September.

Airport in Edinburgh: diagram photo. How to get ...

Airport in Stockholm: diagram photo. How to get ...