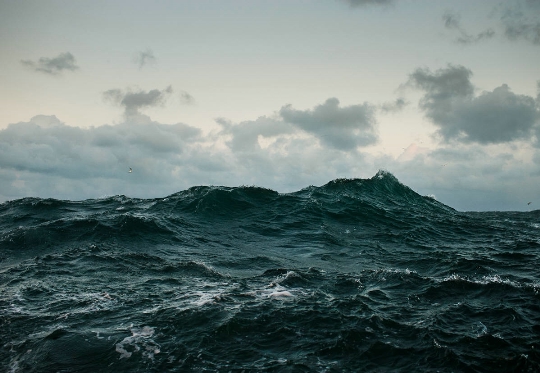 Outskirts pond Antarctica is harshCosmonauts Sea. This is a small area of ​​the Southern Ocean, which borders the Indian Ocean. Big Ridge Gunnerus hidden under the water, it is considered the geographical boundary of the sea. To the west lies a sea waters Riser-Larsen. With the cold sea Commonwealth Cosmonauts Sea is bordered by the eastern shores of Enderby Land.
Waters washed by ice-covered Queen Maud Land. Its coastline stretches for 1,200 kilometers or more, representing a precipice height of 30 m, formed by ice. Seafront meandering, they form the peninsula such as Tang, Risen-Larsen, Vernadsky, Sakellari and others. Between them coves are Bight, Amundsen, Lena, Lutzow-Holm.
The water area has a total area of ​​about 697 000sq. km. The deepest point is located at 4798 m sea Cosmonauts Map shows on the shore is a Russian weather station Juniors, Japan's scientific station -. Seva, as well as the Belarusian station. The proper name of the body of water in question was in 1962, when scientists of the expedition of the USSR carried out their research there.

To the east of the sea are some of the earth as the earthEnderby, Prince Harald Coast, Prince Olav Coast, Mizuho territory. The coast of the Sea of ​​Cosmonauts - a jumble of ice and ice ridges. Among the huge icebergs, you can see the Gulf of Lutz-Holmbukta. It flows slowly ice water during the warmest months of the year. The coastal waters abound with ice floes that drift. In winter, the water freezes on the surface. For this reason, navigation is associated with difficulties and dangers.

The air is rarely warmer than 0 degrees. The sea is in the field of cyclone formation. Therefore, the weather is characterized by strong winds reaching 20 m / s. Solid low clouds, prolonged rainfall and strong wind - this is normal conditions for the coastal zone.

Near the sea coasts there almost lifelessbottom. It is rocky and cold. But deep algae grow bright red color. They live starfish, sea cucumbers, sea urchins and spiders. The waters are rich in sea plankton, which feed on fish and polar birds.
In the reservoir area are found cormorants, penguins,gulls, petrels. This go whales and killer whales. Also, many seals Weddell, crabeater seals and leopard seals. Water Cosmonauts Sea area are fishing pinnipeds, whales, krill and fish nototheniids. The riches of the sea in recent years, exhausted, so the whales are protected by the state. On the coast, there is no permanent population. There are only doing research for science, as well as make hiking expedition.

Holidays in Israel in February: prices and ...