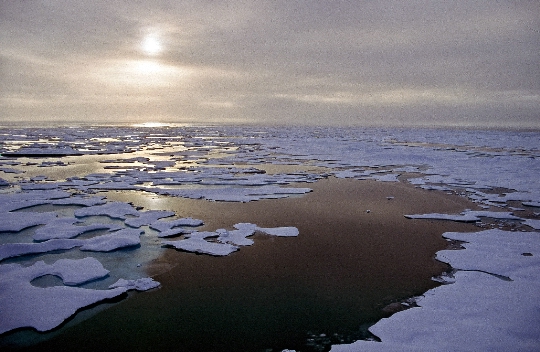 At the edge of the Arctic Oceanlocated Beaufort Sea. Its boundaries run along the coast of North America, and on the coasts of islands. Beaufort Sea is conditional border with the Chukchi Sea. The water area of ​​the reservoir is open Arctic Ocean. Sea limits defined conditionally. It stretched between the peninsula of Alaska and Banks Island. The name of the pond was due to British researcher F. Beaufort.

Sea covers an area of ​​481 thousand square meters. km. The greatest depth is 3749 meters and the average depth -. 1536 m sea Beaufort map shows that it infused such major rivers as Anderson, Colville and Mackenzie.

The sea coast is low and Highposition. It is open to the north and south closed the Brooks Range. These factors determine the harsh nature of the climate in the area of ​​the Beaufort Sea. There prevails a continental arctic climate. It causes a short but warm summers and harsh winter. Center Arctic anticyclone formed over the water area in the winter months. In January, the average temperature is -30 degrees.

This sea is constantly covered with ice. It is the most severe of all the northern seas. Ice appears in the area in August. Already in September, the sea is fixed intense ice formation. In winter, the water is covered with drift ice and fast ice. The coast of the Beaufort Sea and covered with ice. By May, the ice thickness reaches 2 m. Perennial ice sometimes form large ice islands. By water ice is drifting counterclockwise, slowly advancing to Wrangel Island. The ice begins to melt in the coastal areas in June. In the summer ice in the Beaufort Sea is getting smaller. But even in the summer months, more than 80% of the waters covered by drifting ice.

The value of the Beaufort Sea

Considered the sea is poorly known. The underwater world of the reservoir is not very diverse. Scientists distinguish about 700 species of molluscs and crustaceans that inhabit this sea. Because fish are usual capelin, flounder, Liparis, halibut, herring and cod. Among the mammals there are walruses, seals, beluga whales and seals. In the Beaufort Sea rarely swim ships only in September and August. Fisheries developed bad because of the large ice cover and significant depth of the sea. In waters rich in oil and gas fields have been discovered. Therefore, to argue about ownership and boundaries of the Beaufort Sea are together Canada and the United States.

Bahrain Flag photo, history, the value of the state flowers ...

Children's camps in Tyumen in the summer. Children's ...