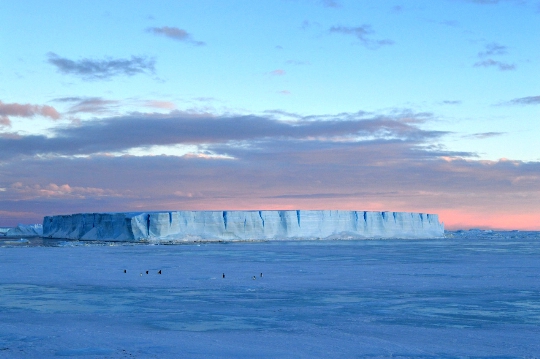 The Pacific Ocean is part of the Southcold Bellingshausen Sea. In the east, west and south of the sea surrounding Antarctica. His body of water designation was due to Russian explorer Bellingshausen. Sea covers an area of ​​487,000 square meters. km. The greatest depth - 4115 m, and the average depth - 1261 m.

The sea crashes into the mainland is not very deep. In the north it is open, so there comes the water exchange with the Pacific Ocean. The largest islands are Earth Alexander I and Peter I. In the northern parts of the water has a temperature above 0 degrees. In the southern areas of the water temperature drops below - 1 degree. The salinity of water is equal to 33.5 ppm. In winter, the sea surface is covered by ice. In the summer, sea ice forms a band width of at least 180 km, which runs along the Antarctic. In all areas of the sea there are icebergs.
The continental slope is very steep pond and shelf strongly dissected. At a depth of about 3200 m slope smoothly into a bed. To the north of the sea depth increases.

Bellingshausen Sea map shows that all hiswater area is located south of the Arctic Circle. This is the area of ​​the Antarctic climate. Here in any season arrives with the air of Antarctica. Most of all the air above the water is cooled in the winter. Near the coast the average temperature is 20 degrees, the island of Peter, it is -12 degrees. In the South Sea minimum air temperature is -42 degrees. In summer, the atmosphere warms up very slightly. Bellingshausen Sea is considered the most arctic antarctic sea. Its waters are partially exempt from the ice in March. During the winter months in the area of ​​the sea is very cold. All year round with penetrating winds blow Antarctica.

Coast Bellingshausen Sea is covered with ice. The mountainous coast is a perennial glaciers. In such circumstances, are found seals and lions, crabeater seals, southern elephant seals, penguins. The open sea is the habitat for whales. In the coastal areas you can see gulls, terns, petrels, cormorants and albatrosses.

Water area contains a lot of difficulties fornavigators. There is a huge ice floes and pieces of icebergs, sea ice thickness large. Strong winds cause large waves. For vehicles there is a risk of icing. On the coast of the Bellingshausen Sea are functioning polar stations in Russia, UK and USA.

The capital of Haiti map, photo. What is the capital city in ...