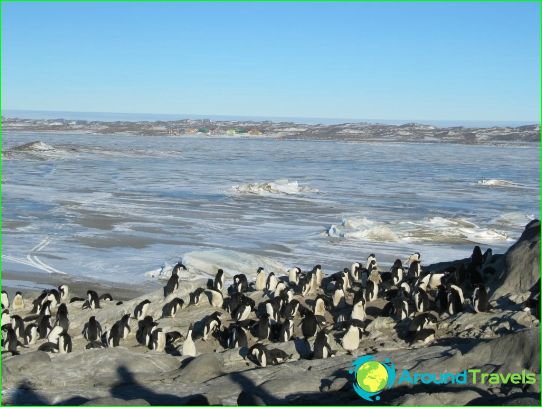 Sea Davis takes an extreme positionSouthern Ocean. Its waters wash East Antarctica and communicate freely with the Indian Ocean. Waters is one of the coolest on the planet. Throughout the year, it is covered with ice, and the water temperature rises above zero.

Sea Map Davis shows that itlocated close to the shore of Truth. In those places the glacier reaches a thickness of 1000 m. It is the sea belongs to the most harsh seas of the world. In size it is less than the Weddell Sea, but superior to the Amundsen Sea. Waters is almost completely covered with perennial ice. For the first time people have learned about this through the Australian Mawson Sea, which got there in 1912 during an expedition. On the Truth Beach is the polar station "Peace", built during the Soviet era.

Davis Sea covers an area of ​​about 21 thousand km. sq. The average depth of nearly 572 m and the maximum -. A little over 1300 m Water salinity is about 33.5 ppm. In the central part of the sea is the island of Drygalski, having an area of ​​approximately 204 km. sq. The seabed is represented by the Antarctic shelf, passing in the continental slope.

Through the middle of the reservoir passes the Antarctica circle. This feature determines the climatic conditions in the waters of the area. Here is dominated by the Antarctic climate. Year-round over the sea is the Antarctic air mass. The weather is unstable, with private winds and snowfalls.

In the Davis Sea moderately cold winters. From July to August the temperature range from -28 to -32 degrees. There is almost always overcast and snowfall occurs. In summer, the air warms up very slightly. The temperature goes down to the south. In North Sea temperature approaches 0 degrees. In winter, the pond is completely ice-bound. Surface water temperatures are 1.8 degrees. The upper layers of water in the summer slightly warmed. The warmest portion is west, where the water reaches a temperature of about 0.5 degrees. In spring and summer the sea appear some areas, ice-free. In the Davis Sea has icebergs drifting ice, fast ice, ice shelves.

The value of the Davis Sea

scientists are working on the beach, studyingespecially the ice continent. Antarctic station "Peace" has been working to identify minerals. In the east, the sea is an Australian station "Davis", which employees are engaged in the study of global warming. The coast of the Davis Sea is not inhabited.

Organic underwater poorly studied due to interference in the form of perpetual ice shell. In this usual Sea Antarctic silverfish, belonging to nototheniids fish.

Holidays in Slovakia in November: the prices and ...

Airport in Harbin diagram photo. How to get ...