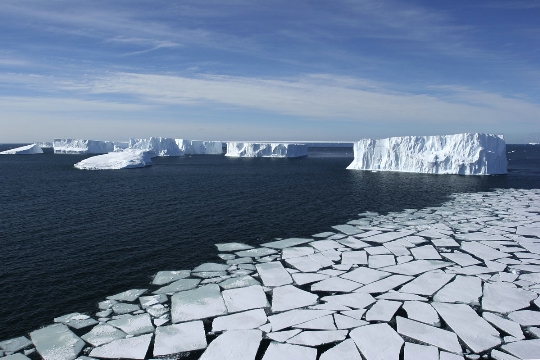 Continental margin pond Southern Oceanis the Ross Sea. It is located in the Pacific part of the ocean, next to the West Antarctica. This sea is closer to the South Pole than other Antarctic waters. Its water area is almost completely covers the shelf. The waters of the Ross Sea bordering Victoria Land between Cape Adare and McMurdo Sound. There is a huge glacier stretching from Cape Colbeck to the Marie Byrd Land. The glacier has a steep ledge called Barrier of Ross, who is considered the southern boundary of the sea.

Main features of the Ross Sea

Ross Sea map shows that it is locatedin the Antarctic climate zone, south of 70 degrees south latitude. The waters of the air enters from the mainland. Therefore, in this area there is a very cold summer and winter with severe frosts. The coldest month is considered to be August. The average temperature in the period ranging from -26 to -36 degrees. The lowest temperature which was recorded, is equal to -62 degrees. In winter, the average temperature is -2 degrees. Weather in the Ross Sea region is windy and cloudy. The temperature of water under the ice is -1.7 degrees. Sea the whole year is covered by pack ice, which have a different shape. In some places there are icebergs and fast ice. The salinity of the water is 33.7 - 34 ppm.

The coast of the Ross Sea has no indigenous population. They live only polar station staff, which is not more than 2,000 people. Previously, the water area was under the control of Great Britain, which in 1923 transferred its powers in this area of ​​New Zealand. In this case the water area of ​​the sea and the coast are protected by mankind to the Antarctic Treaty of 1959 This document is a guarantee that the neutral territory of Antarctica is used in the common interest of mankind. It gives the right to freedom of scientific research. The contract is valid until 2048

The Ross Sea is very juts into Antarctica. For this reason, it has long been the site of many expeditions that sought to get to the South Pole. Expeditions carried 12 states:. USSR, the USA, Australia, Great Britain, Argentina, France, etc. Today, the different parts of Antarctica lay claim seven countries, in spite of the signed agreement on Antarctica. Under the ice were discovered rich deposits of energy resources. However, the current economic use is limited only by the Antarctic bioresources.