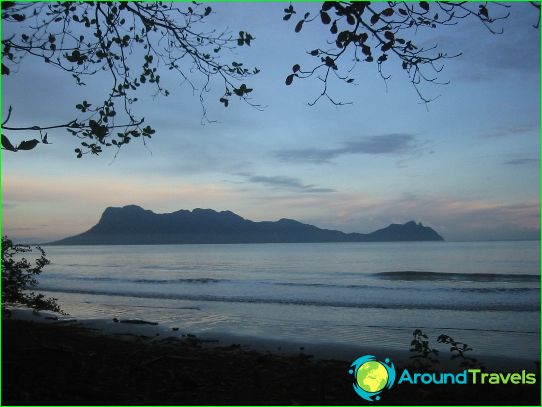 In the western part of the Pacific is locatedSouth China Sea. Its waters wash the eastern and south-eastern coast of Asia. Map of the South China Sea shows that it is spread out between the islands of Borneo (Kalimantan), Taiwan, Luzon and Palawan. The largest peninsula in the waters - a Malay and Indochina. South China Sea covers a vast area. Its area is 3,537,000 square meters. km. The depth is, on average, 1024 m deepest point located near the Philippines -. 5560 m.

South region is located on the continental shelf. They recorded the shallows. Retiring to the west of the Philippine archipelago, we can find deep sea. Depth locations reach 4000 m or more. waterfront indented slightly. His biggest bays are of Tonkin and Siam. The South China Sea is fed by rivers such as the Mekong, Red River and Xijiang. The water area is located very many coral islands.

In the South China Sea, there are superficialseasonal trends, which often change direction. It is dominated by medium tide, reaching in some places 6 m. The warm climate zone, prevailing over the water area, has led to high water temperatures. It is almost always higher than 20 degrees. In some parts of the sea water warms up to 29 degrees.

South China Sea is variedvegetation. In its depths there is a lot of seaweed:. Red, brown, green, single-cell, etc. In the coastal waters is found more than 1,000 species of fish. In the sea there are the sharks of different species, from the bottom to the coastal and deep.

The value of the South China Sea

The water area of ​​the sea has always aroused the interest ofcountries such as Malaysia, the Philippines, China, Taiwan, and others. Strategically important are considered to be the Spratly Islands. They claim immediately 6 states. Studies of the deep sea have proved that there are significant reserves of oil. The largest oil and gas fields is considered to be the Sunda Shelf. In the waters of the sea passes road linking Africa, Australia and Asia.

The coast of the South China Sea has attracted manytourists. Therefore, an important role in the economy of the coastal states of tourism. Holidaymakers eager to get to the volcanic and coral islands. Beautiful nature of some of the islands poses a danger: many volcanoes are active, so there often occur earthquakes, eruptions and tsunamis.

Bus tours to Europe. The cost of bus tours ...

What to buy in Beijing. What to bring out ...