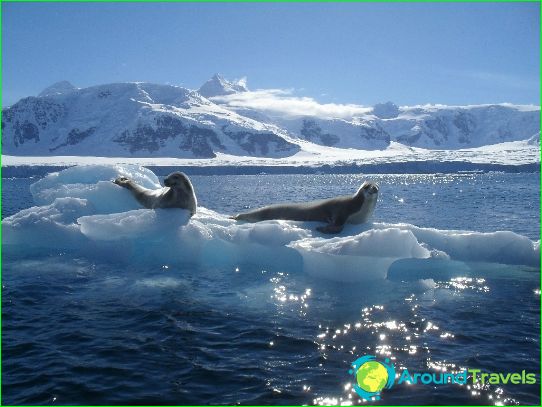 The youngest ocean on the planet is the Southernor Antarctic. It is located in the southern hemisphere, it has a common space with other oceans except the Arctic Ocean. The waters of the Southern Ocean surrounding Antarctica. International geographical organization identified it in 2000, bringing together into one the waters of the southern regions of the Indian, Pacific and Atlantic oceans. This ocean is conditional boundaries, as in the northern parts of its waters are no continents and islands.

The Southern Ocean has become the object of interest of people verylong. They tried to explore in the 18th century, but at that time ice shell was an insurmountable obstacle for travelers. On the map it appeared even earlier, in 1650. In the 19th century, the polar Antarctic whalers were able to visit from England and Norway. In the 20th century the Southern Ocean fishing area was the venue for the whales and science research.
Currently, the existence of the Southern Ocean -it is a proven fact, but this decision hydrological organizations is not institutionalized. Thus, a legal area on the planet there. At the same time the Southern Ocean is marked on the world map. The southern boundary of its waters is Antarctica, the northern border is considered to be 60 degrees south latitude.

The ocean covers more than 20 million sq. M. km. . South Sandwich Trench - is the deepest place in the ocean, where the maximum elevation reaches 8428 m Map of the Southern Ocean has shown that it is formed by the following seas: the Commonwealth, Mawson Ross Dyurvelya, Somov, Scotia, Lazarev, Cosmonauts, Riser-Larsen, Amundsen, Weddell and Bellingshausen Davis. The waters there are many different sizes of islands. Almost all of them are of volcanic origin. For the largest islands include South Shetland, South Orkney, Kerguelen.

The coast of the Southern Ocean - an area wheredominated by the harsh elements. Above the water conditions prevailing sea climate and Antarctic climate is seen on the shore. All year round there is cold, windy and overcast. In any season of snows.
Close to the Arctic Circle formed the most powerfulWinds on the planet. Storm formed by huge temperature difference between ocean water and air. In winter, the air reaches 60-65 degrees below zero. The atmosphere over the water area is characterized by ecological purity.
Weather conditions caused by several reasons: the proximity of Antarctica, permanent ice cover, absence of warm sea currents. high pressure area is formed continuously over the land. At the same time around Antarctica formed area of ​​low pressure or depression Antarctic. The peculiarity of the waters - a large number of icebergs, which are formed by calving of the glacier by the tsunamis, swells and waves. On the territory of the Southern Ocean there are more than 200 thousand icebergs each year.

Photos of the Southern Ocean