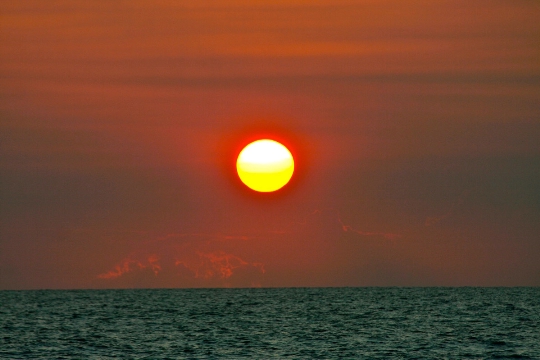 Timor Sea is located in the southern hemisphere. This tropical sea, which is sometimes referred to as the Orange sea. Its water area stretches between the island of Timor and Australia. In the east it is bordered by the Arafura Sea and in the west - the Indian Ocean. Map Timor Sea makes it possible to see the largest port in the area - Darwin, the Australian city.
A large part of the water area is located on theSahul continental shelf. There are a lot of cans, coral reefs and atolls large. On the north chute is Timorese, which is a continuation of the Sunda trough. In the area of ​​the Timor trough formed a seismically active area. In the Timor Sea are the waters of rivers such as the Victoria, Daly, Adelaide, King, Mitchell and others. The area of ​​the reservoir is about 432 thousand square meters. km. Its average depth is not very significant, but in some places there are great depths. For example, the depth of the Timor Gap is 3310 m. The sea is dominated by seasonal trends, which in the winter are directed to the west, in the summer, go to the east. Waters has a smooth bottom relief, although in some areas there are gaps. The average depth is considered an indicator of 200 m.

Timor Sea is located in the monsoon zonesubequatorial climate. This tropical shallow sea, which often arise typhoons. Tropical cyclones deliver a lot of problems for people, disrupting oil production companies. Powerful Cyclone Tracy in 1974 caused extensive damage in Darwin. In winter, the sea area there is the rainy season. The water temperature is always high. Even in winter it does not fall below 25 degrees. On the coast of the Timor Sea strong winds are rare. Tropical cyclones usually originate in the southern region and in the Arafura Sea. Sometimes the wind speed reaches 30 m / c.

The value of the Timor Sea

The water area is rich in hydrocarbons. Several projects on oil and gas production have already been implemented. Under development are new projects. Experts are searching for new deposits in the sea area. The largest gas field is considered Bayu-Undan. It is being joint gas development in East Timor and Australia.

The waters of the sea are home toa variety of fish. Among them, there are many dangerous for human beings. This jellyfish siphonophores, prickly poisonous fish, mollusks cones, octopus, saltwater crocodiles. There are sharks swim as mako, tiger, blue, great white, and others. In spite of the danger, fishermen set sail on the sea in search of food fish and shrimp.

Rent a Car in Slovakia. Car Rental in ...