3 months in a tent and how it affected my life

In winter, I always remember the summer, because I don’tI can not addicted myself to winter sports and pastime. And life for me stops waiting for the heat. Continuing to indulge in memories (the last time I wrote about my first trip in rubber slippers), I want to tell you how I once managed to live in a tent for 3 months.

Back in 2005, I left for the Caucasus Revival, so much so that there spend so much timeas you like. Whether it is bad, warm, fruit, the sea is not far ... Therefore, I took a vacation at my own expense at work (I wanted to quit, but gave a long vacation) and we drove off together with a friend.

Why did we go? Probably everyone had a period of youthful maximalism. Personally, I had it in denying all the benefits of civilization. And the fixed idea was that the person is self-sufficient and does not need anything. That's the way it is, I still think so, but how much it suits me specifically at this stage in my life, you can only find out by checking. No sooner said than done. However, I'm not a fool to go to the taiga, so I chose the Caucasus, summer, sea, mountains. However, this experience has been revealing. 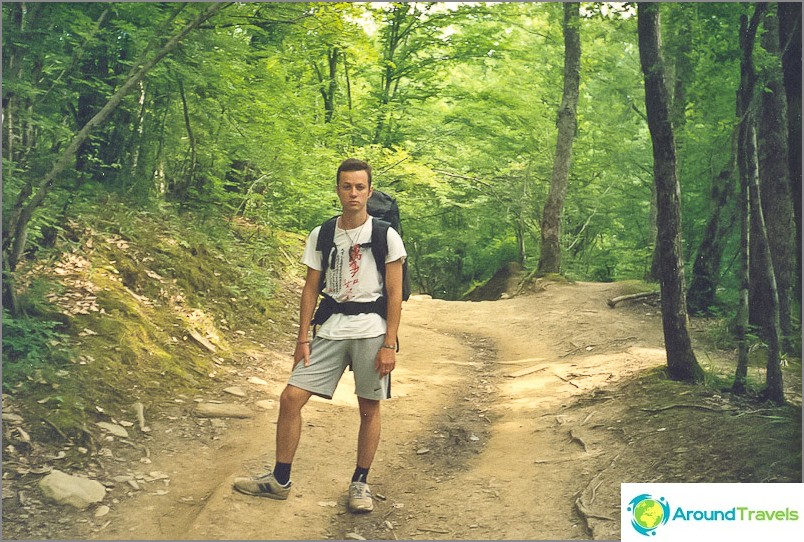 We arrived in the Renaissance

We arrived, pitched a tent among the samenon-formals like us. Subsequently, we still built a film shelter for ourselves, so that we could not sit in a tent in the rain. In the summer there is a whole tent camp formed. And the real hippie life began. In the morning you get up, go to the river, plunge into its invigorating bowels, cook food on the fire, go to visit and chat, sit and meditate at the dolmens, in the evening the songs around the fire and tea around. Then the Renaissance had some amazing atmosphere of good and positive. We lived on a hill, and from it all the glades in the neighborhood were visible, which at nightfall lit up with a fire and enlivened with the sounds of guitars, violins and flutes. Everywhere were welcome guests. If you watched a movie about Robin Hood, then Sherwood Forest is very similar to what we saw that year. 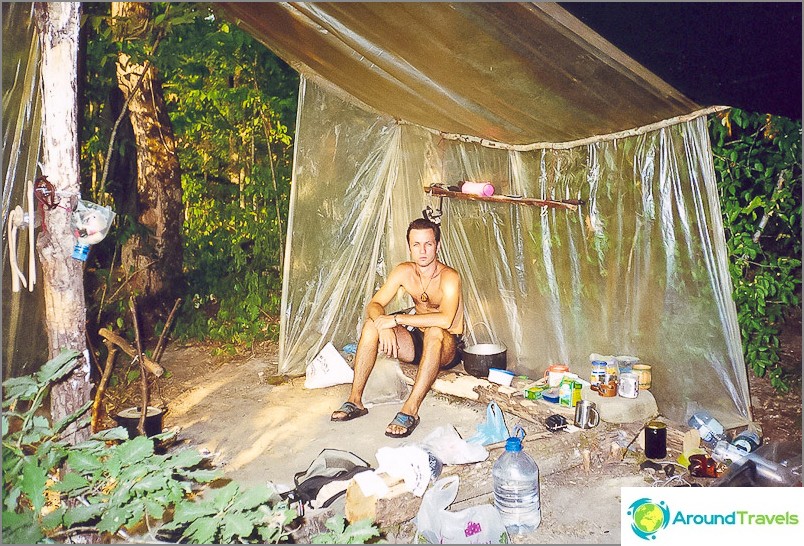 Our film canopy in Renaissance 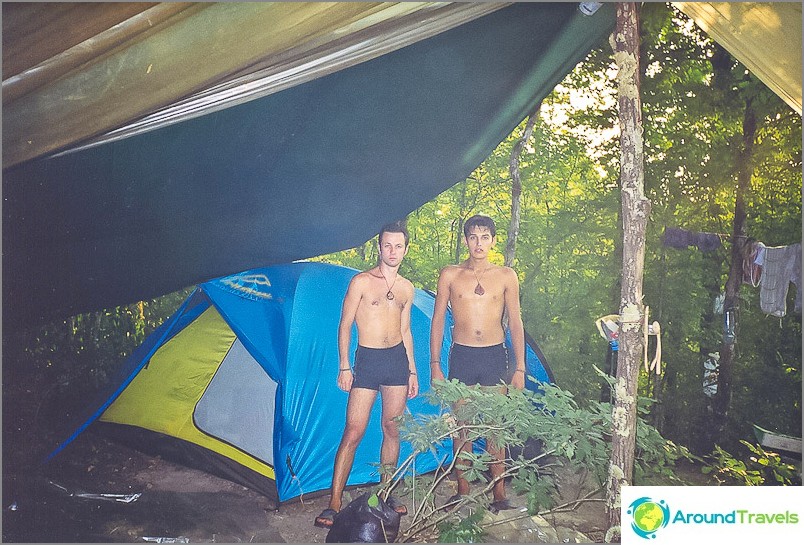 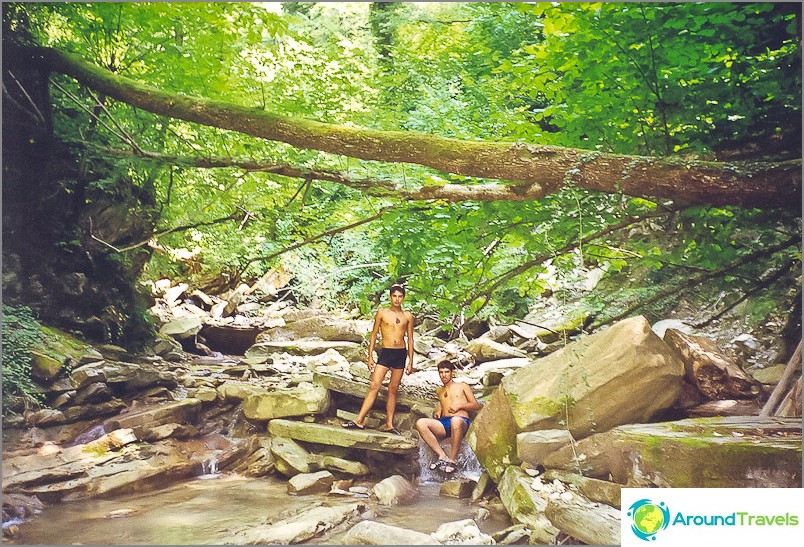 Walking on the river Jean 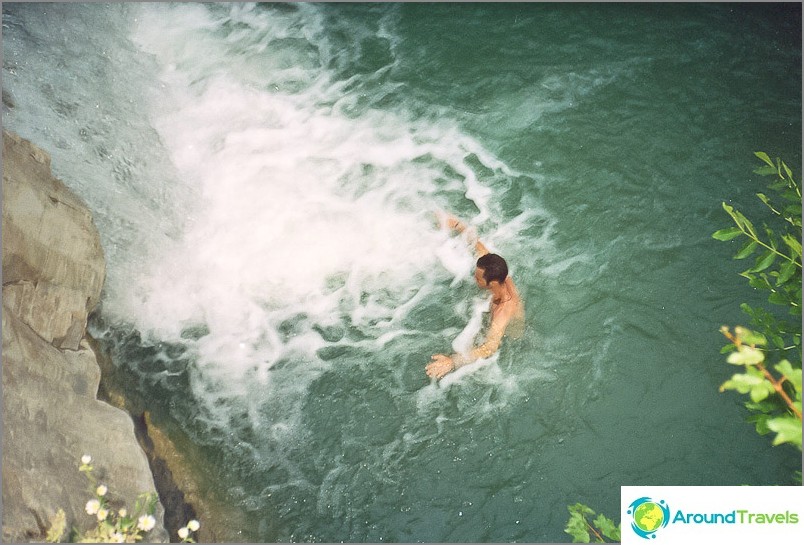 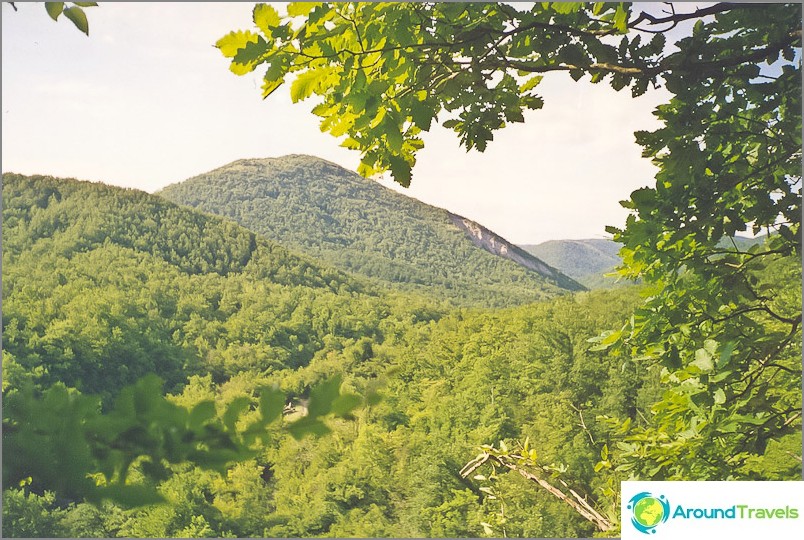 View from our tent

When we were tired of thinking, we triedcut spoons, knit, learn flute notes or new guitar chords. Or just went to the sea to swim, the benefit was only an hour to get there. Once we even had to extinguish a fire in Dzhankhot - in swimming trunks and barefoot we ran along the slopes and dug ditches, cleared the areas from pine needles and started firing towards each other (I in the book “Prairie” by Fenimore Cooper read it in childhood and remembered). As a result, our parking did not burn down and did not have to be evacuated. All my life I remembered how terrible the element is - a wall of fire coming at you ... 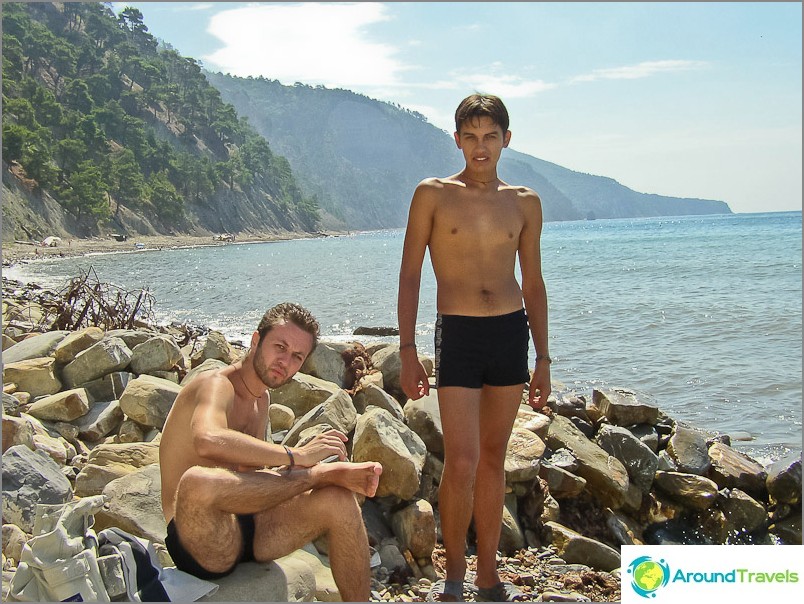 I pick out pine needles from the feet after a fire 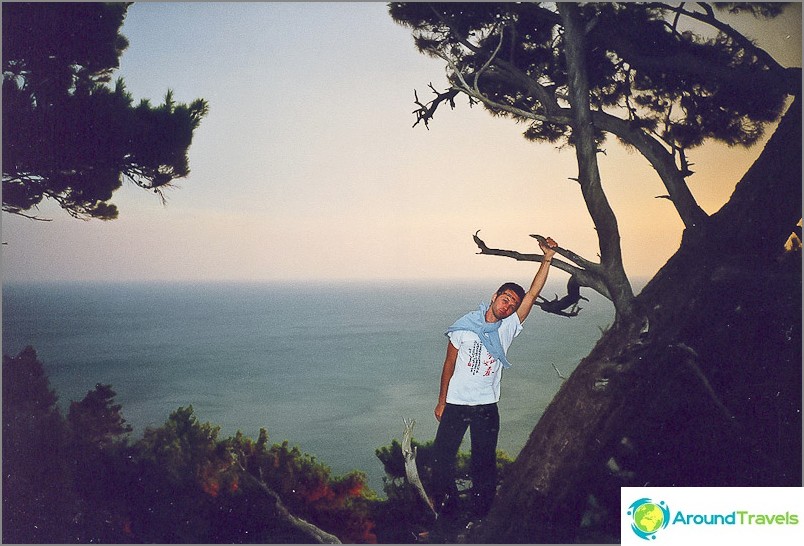 One week after the fire against the background of burnt pines

Over the summer we climbed the entire Gelendzhik district, accidentally went camping on Semiglavaya, visited the campsite in Asha and the Sochi Arboretum, met a bunch of people, mastered hitchhiking, hardened so that the sea became unpleasantly warm, dropped all the fat, even that which was not, and realized that it was time to go home. 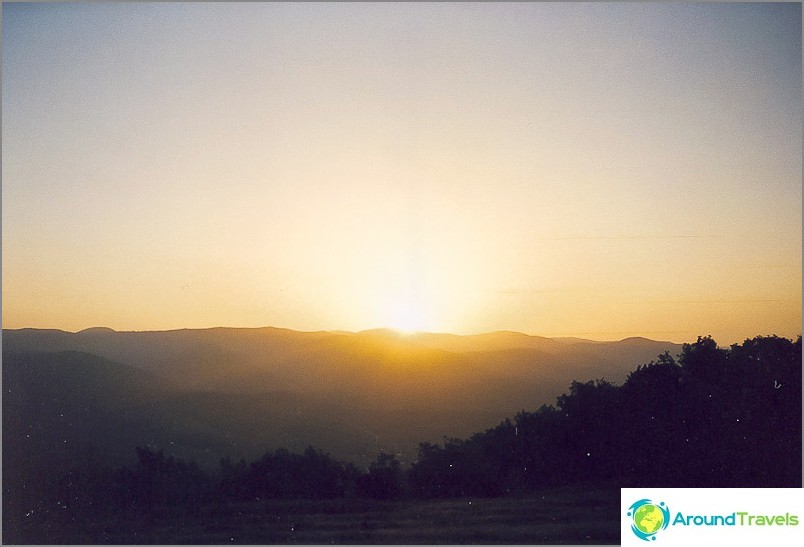 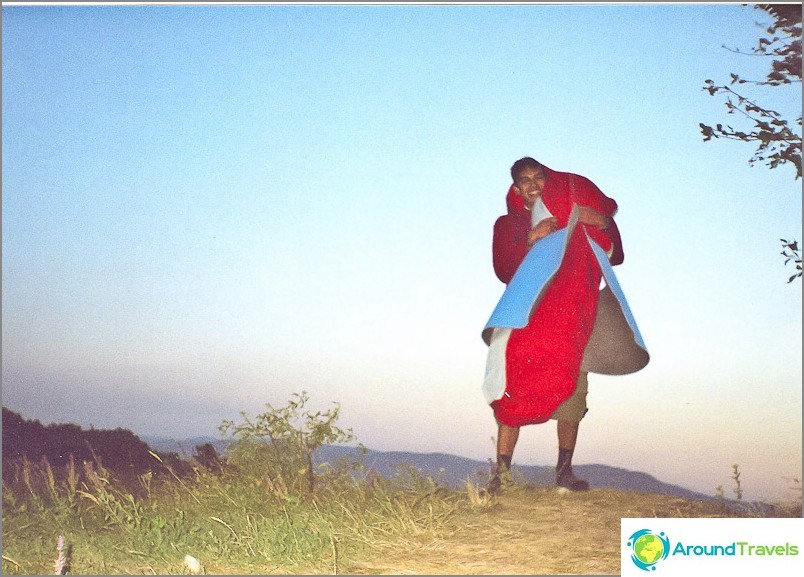 On the mountain Nexis Lech trying to wake me up 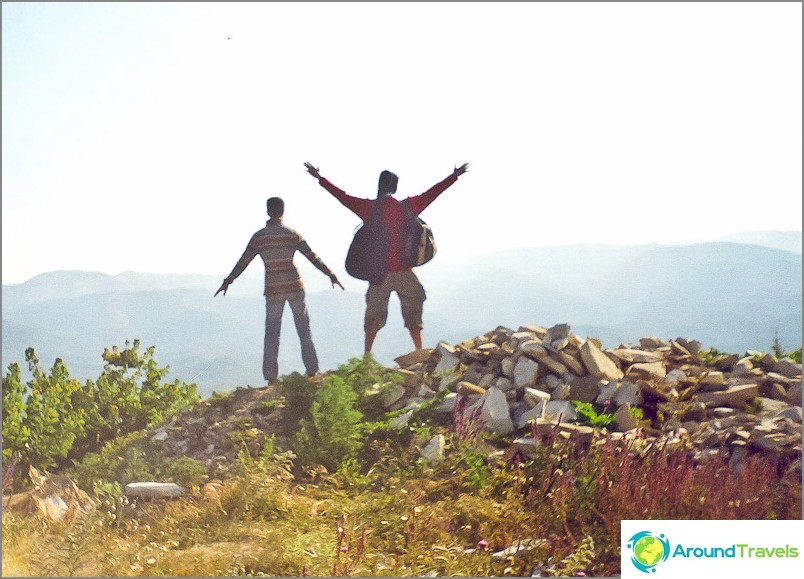 On the mountain Nexis 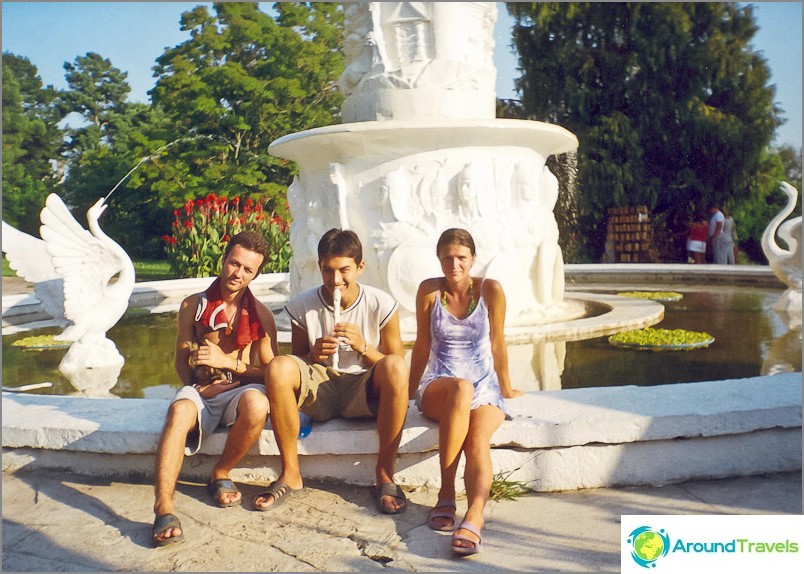 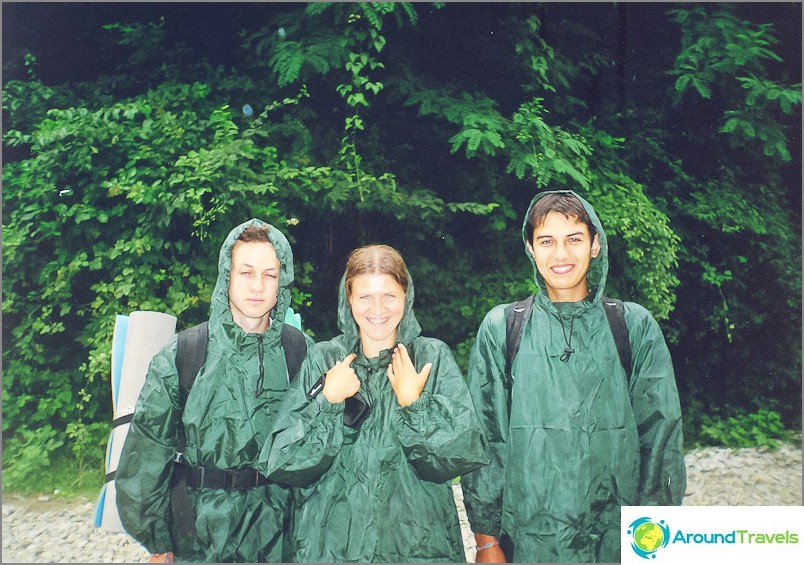 We went to the mountain Tsygankov and came under a 5-hour downpour, the raincoats did not save 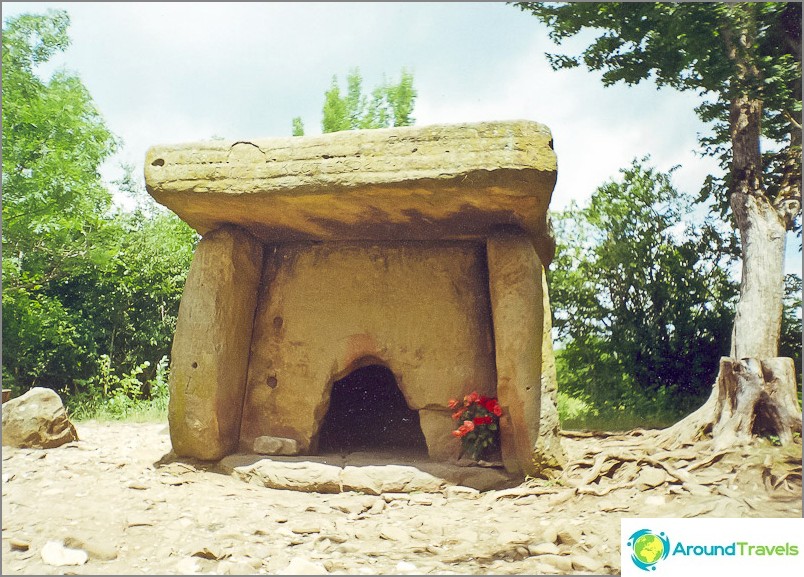 After 3 months it became clear that the moneythe summer is over, too, and it's probably time to go home towards the goals. As practice has shown, life in the forest did not suit me, I already wanted to the benefits of civilization in the form of a shower, toilet, bed, as well as to the computer and the Internet (travelers will understand me). Although the bed for two weeks was not perceived and I slept in a sleeping bag and without a pillow. It was equally difficult to get used to the constant noise in the street and bustle, like a wild man shied away from everything

And then there was a job as an engineer of differentspecialties, finding yourself, getting married, traveling, and finally everything came down to this blog, making money online and deciding to leave Moscow for a quieter place. Further it will probably be even more interesting. 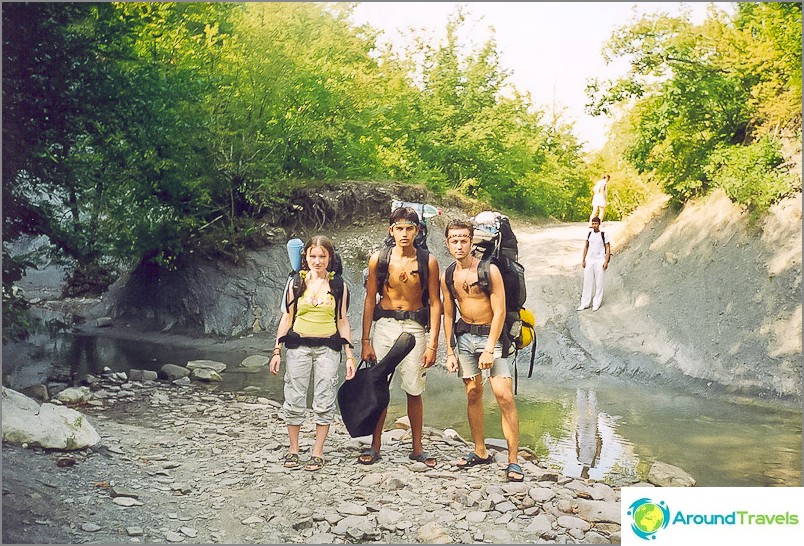 Savages before leaving for Moscow 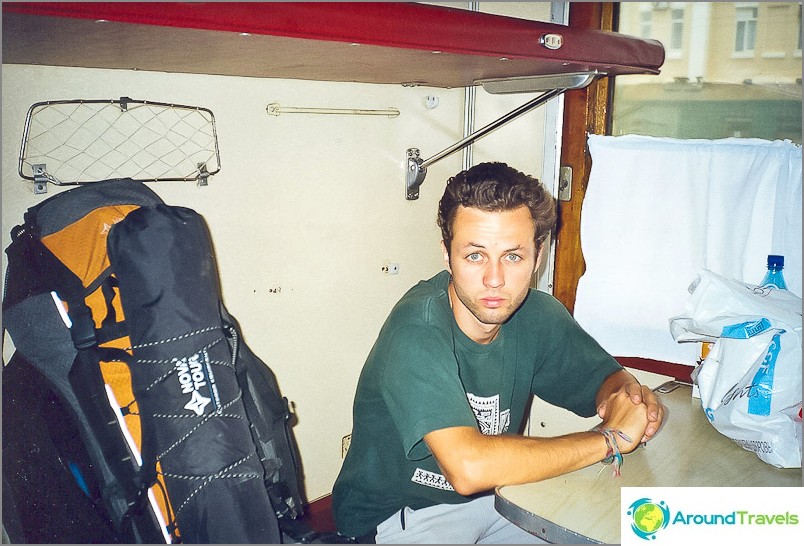 Moral of this fable

Those feelings, that freedom and joy, derived fromlittle things - daily bathing in the icy river, good conversations around the fire, stunning sunsets, the sea to the horizon - you can not forget, they changed my value system and philosophy of life. Having once felt the taste of real life, then it is very difficult to perceive surrogate pleasures. Who wants to eat a “plastic” tomato from the supermarket after a tomato from the garden? Only the one who did not try, or the one who did not see the difference ... It is clear that this is an allegory, and the situations are different, but I still tend to the fact that these joys are intangible.

I sometimes remember my childhood. How, after all, there was little to be happy: stomp your feet in a puddle, get a radio receiver under the Christmas tree, ride a bicycle all day round the country house, build a hut in the forest. I have forgotten how to rejoice? Or there are objective reasons why an adult needs to take a number of actions to get the same sensations - take a ride on a yacht, buy a car, rent a luxury cottage for the New Year. Bit strange

No, no, you do not think that I'm agitating for lifein a tent. I also need things, a house, etc., otherwise I wouldn’t have returned to Moscow and now I would probably write these lines from some dugout, and I would still be taking pictures from some soap box (although I don’t exclude that there are people who can live like this). Just after that tent life, my priorities shifted, it became easier to separate the wheat from the chaff - to understand what is really needed and what is not. It became obvious that a cage, no matter how golden it was, could never replace my blue sky and forest. No matter how utopian it may sound, but making money has faded into the background in the name of occupations that bring satisfaction and in the hope that sooner or later, earnings and self-realization will coincide like a puzzle.

P.S. With memories over, so in the next articles about Kaluga and Kharkovand I also rummaged around in Thai photo archives and want to share some interesting photos in my opinion

What to see in Sanya from the sights