Home>New articles>33 facts about Oymyakon, or how they live at the Pole of Cold

33 facts about Oymyakon, or how they live at the Pole of Cold

The final post about the January trip of my friend Vitalik. That's how it happens, at first he didn’t want to write, and then he signed for several posts

I read and understand that it is necessary for such people to conduct blogs, it painfully writes. But this is not surprising, they are all such linguists.

For two days at the Pole of Cold, Ilearned something remarkable from the life of simple ojmykontsev. As a result, the idea arose to arrange it in the form of a small selection of 33 facts. That's what happened in the end.

one. Oymyakon in Yakutia is called the whole area, which includes several settlements, including the village of the same name. The center of the area is the village of Tomtor, where there is an airport and a weather station, where the minimum temperature of -71.2 ° C was recorded. Here you can on map look. 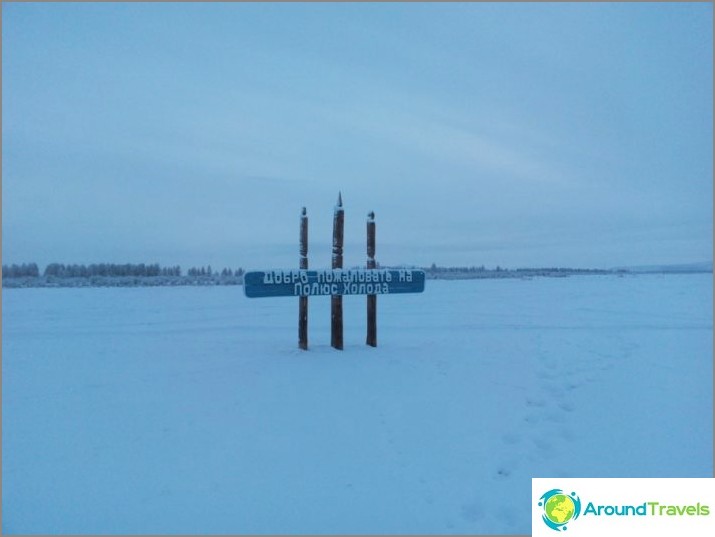 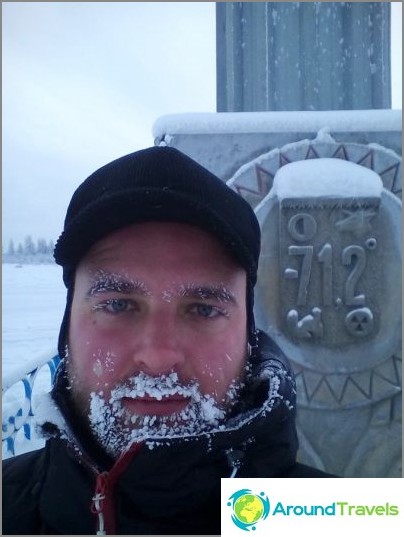 2. In Oimyakon itself (village), which is located 40 km north of Tomtor, there was never a weather station, but they also installed a memorable stele for decency there.

3. Outwardly, the villages of the Oimyakon Valley are not very different from those we are used to somewhere in the Volga region. It turns out that the technology of a simple Russian izba can easily withstand extreme cold. 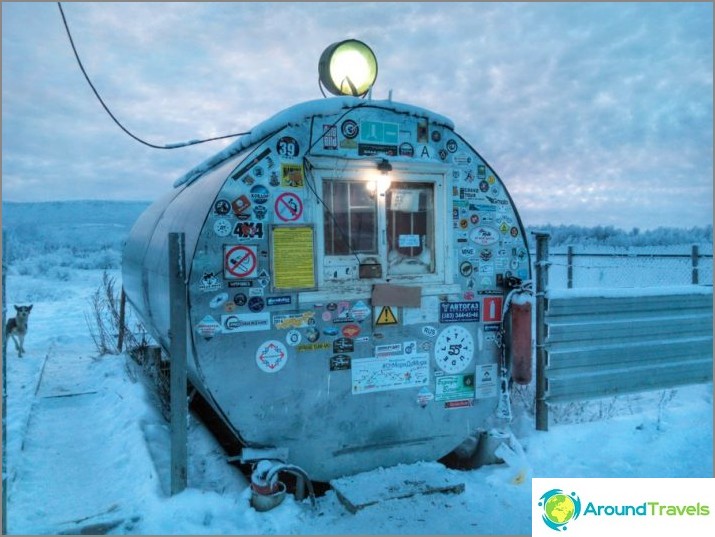 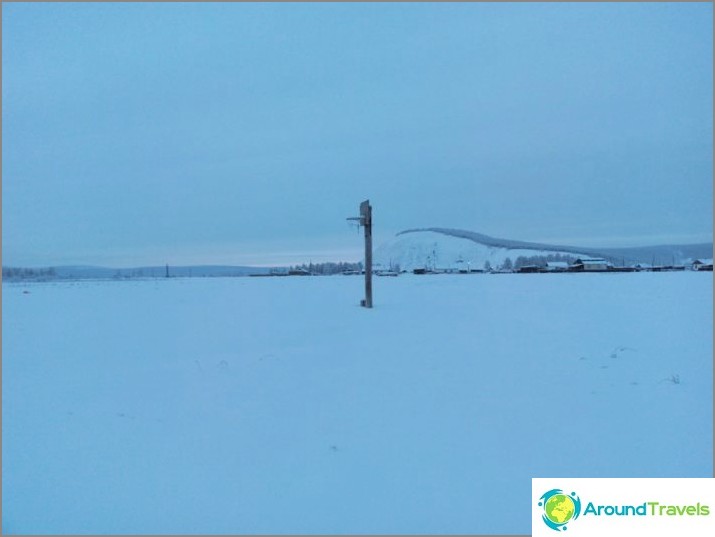 4. Machines do drive with double glazing. And if a double bag is put on the windshield at once, then it is not possible with the side ones, so the second glass is glued onto a regular adhesive tape. Otherwise, the person sitting next to you will have the risk of freezing half his face. 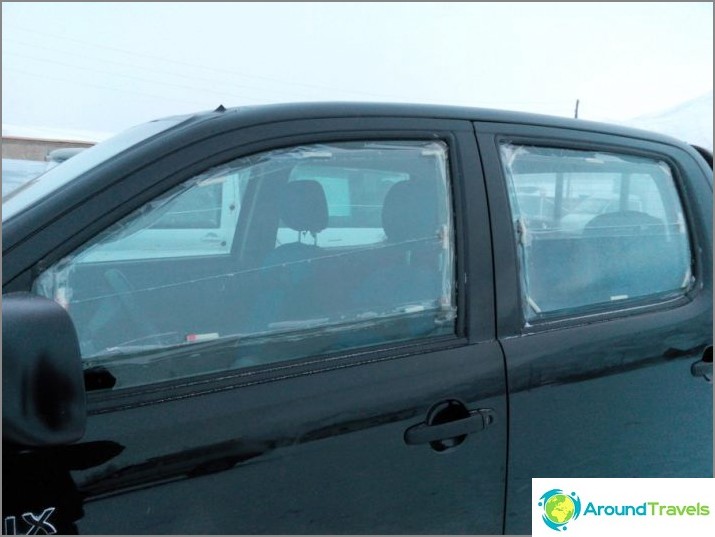 5. At night, the cars are jammed, but for them there are special heated garages, where the temperature does not drop much below zero, so it’s not a problem.

6. At temperatures below minus 56 (it is considered cold here), the equipment starts to behave strangely, and it is not recommended to go far without unnecessary need.

7 If you still had to go in such a cold, then the consumption of gasoline doubled. In addition, if you stop on the road, the tires begin to deform under the weight of the car, and at first you have to go slowly and as if over bumps. You also have to carry with you a complete set of spare parts, sufficient to repair a stalled engine on the road.

8. Children of elementary grades stop going to school at temperatures below -52, seniors - at minus 58. This is due to the same risk of equipment failure, since many children get to school by bus.

9. In some houses, for example, in the village of Kuydusun, where I stayed, there is a central water supply. However, only hot water flows from the tap (cold water in the pipes would simply freeze), and taking a shower to those who turned off the hot water at home should be fun: you need to carry cold water in buckets and dilute it with hot water from the tap - the opposite is true.

10. By the way, many have a toilet in the yard. It has light, but no heating, and this is considered normal. I probably won’t share here the sensations of visiting such a place =) However, they are trying to build new houses in an already familiar, not extreme format. 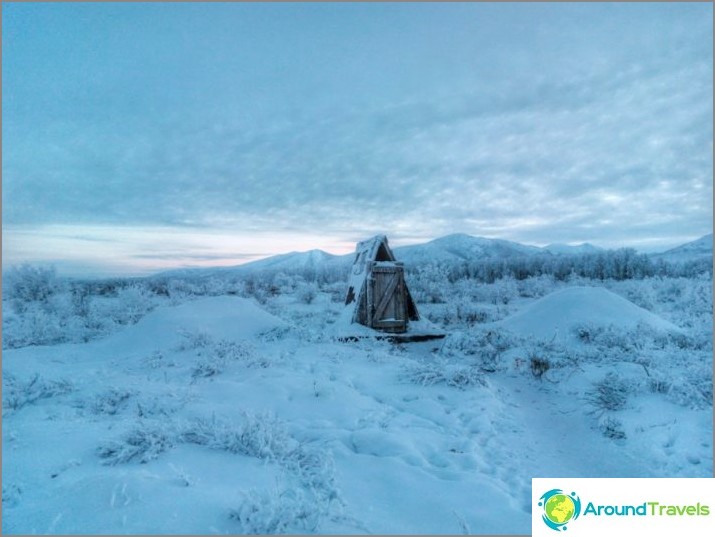 eleven. The cost of firewood for heating 120 m2 of house + bath + garage per season (which lasts here 8 months) is about 50 tr. Taking into account the fact that this also provides hot water, it is even cheaper than in Moscow.

12. “Oymyakon” in translation from Evenskiy means “non-freezing water”. Indeed, where is it still not freezing. It's all about the warm keys that beat out of the ground and form streams on the surface. They completely freeze only by March. The nature around them is exceptionally beautiful. 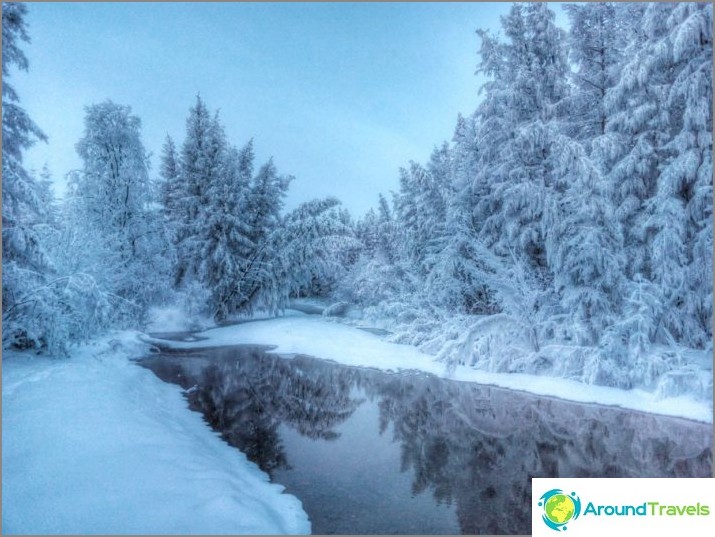 13. People live hunting (for themselves) and livestock (for sale and cash). Bred horses for meat, there is still a large reindeer farm. In the photo the barn. 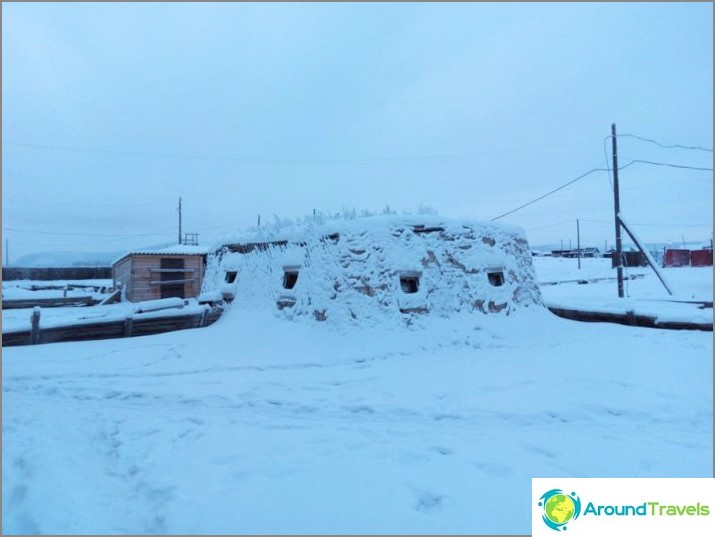 14. The Yakut horse is a unique beast. She doesn’t need a crib, she grazes outdoors in any weather, she also produces food herself, picking the frozen ground with her hoof. Feed it should only be so that it does not go far from the owners. 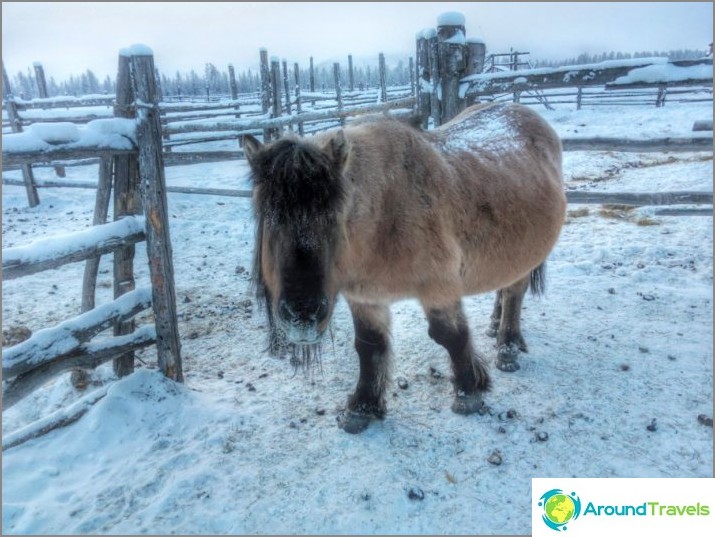 15. Farmers say that this horse is “programmed” to search for special nutritious herbs, so that its meat contains such a complex of vitamins that allows a person to fully eat without eating vegetables and fruits.

16. Horsemeat is considered a local rude meat. In honor of the colt, and in the Yakut restaurant you will be served her, not horse meat. 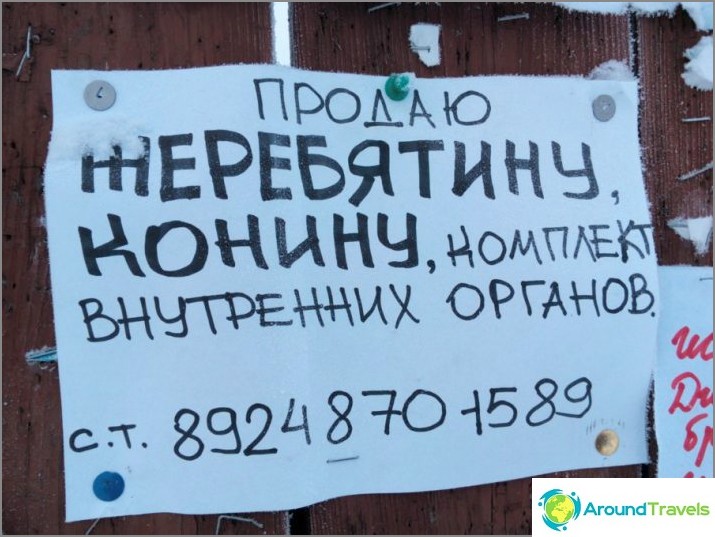 17. A foal is slaughtered at the age of 6-7 months old, tying his eyes and striking a aimed blow with a hammer.

18. On the bill of vitamins I can not check, but a bottle of koumiss from the milk of this horse makes you forget about hunger for a long time. His taste is exceptionally tart, and resembles a dense strong ale.

nineteen. The height of the hunting season falls on the most severe frost, since hunting is prohibited in the spring - animals give offspring this season, and bears make competition in summer (which, incidentally, doesn’t stop the locals, they only complain that it is forbidden to shoot bears, and if necessary, they will have to prove it later).

20. Despite their affection for nature, the locals are very advanced in information technology (although MTS only has mobile Internet). For example, the driver Max, who drove me from Ust-Nera to Tomtor, quit his job with his wife, they are now engaged in network marketing - they manage sales of some Tibetan dietary supplements.

21. Everyone, including 70-year-old pensioners, has a WhatsApp account with photos.

22 WhatsApp allows you to rescue the driver or the hunter in case of problems: for example, if he did not return at the agreed time and did not get in touch, his wife makes an alert through the group, and everyone who is in touch helps to organize a search and rescue operation.

23. Debt in the store can be paid by transfer from card to card.

24 In the village of Tomtor, there is a cafe for the whole area (at least, people go there with their family and friends, as in a cafe). There can not eat foals, but you can fries and nuggets - for local it is a delicacy. When they learned that I was from Moscow, they aggressively tried to find out if they had the right potatoes. 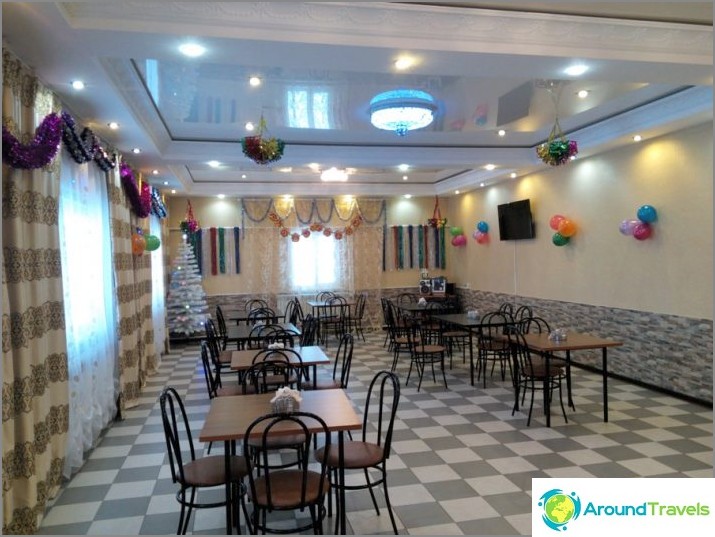 25. From the power structures to the entire Oimyakon Valley, only in Tomtor there is a precinct police officer and an investigator. In the remaining villages, according to the local, anarchy, gangsterism and drunken clashes reign.

26 There is a guy in Oimyakon, I did not remember the name. Once, in a drunken brawl, they knocked him out on the street and abandoned him. He woke up after 15 minutes, came home, fell asleep. The result - the amputation of almost all frostbitten fingers. Now working as a driver, by the way.

27. Tomtor has a local history museum. In it you can twist in the hands of almost all the exhibits, including the 1764 carbine. Visiting the museum is free, but for this you first need to find its owner. What else to see in Oymyakon. 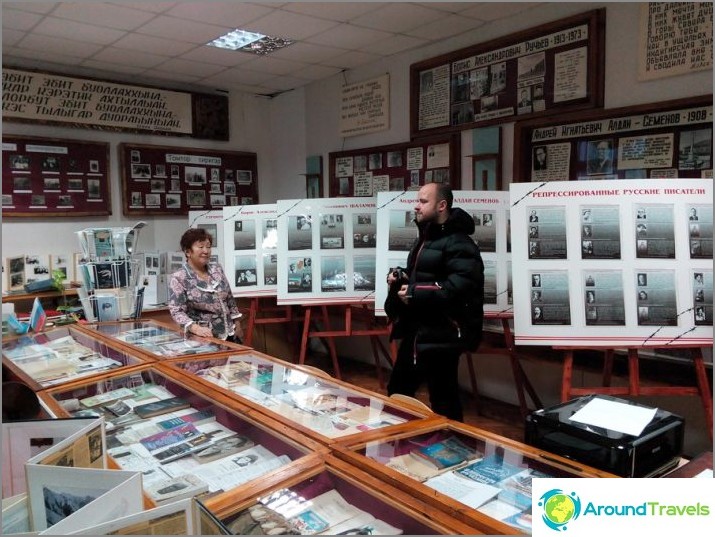 28 Oimyakonye is famous for its Gulag camps, which numbered 29 in the same area. They say that, to counter the shoots, nkvdshniki promised local hunters for every bag of sugar or flour brought by the fugitive (the brush was needed to verify fingerprints). The circuit worked. Moreover, the particularly cunning ones first caught the fugitives, forced them to work for some time for themselves, and only then killed them: but what, the bag of sugar is not superfluous. 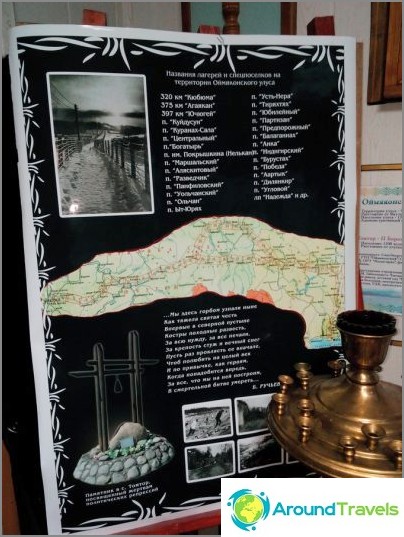 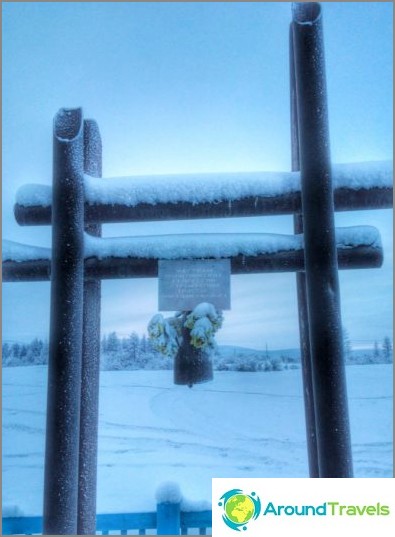 29. In addition to local history, there is a museum of the Gulag, as it is called local. It was assembled by a simple village teacher and located in the school building. A little more about him I wrote here.

thirty. Locals are not particularly proud of the title “Poles of Cold” and would even be happy to officially give it to Verkhoyansk (this is another coldest place in Yakutia, which is already beyond the Arctic Circle). They are a little offended by the fact that foreigners come to gawk at them as such losers, whom fate has thrown into the coldest corner of the planet.

31. Locals in all seriousness consider their climate one of the best, and really wonder why the rest of them call it hell. In the museum of local lore there is a whole stand about how the Oimykonsky air has a positive effect on health. With examples of "success stories" of famous centenarians. 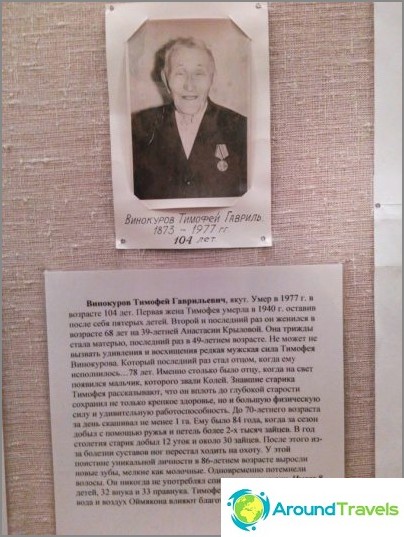 32. Trips of foreigners often end for them adventures. They say how some Czechs drove somehow along the old Magadan highway, and they simply ran out of gas. Well, one of them managed to catch a satellite connection and called home. Those already - to the Czech embassy, ​​from there - to the presidential reception in Yakutsk, then to Ust-Nehru, then to Tomtor, and they have already thrown the cry in WhatsApp. Found them still "lukewarm." When rescued from the cold captivity, they joyfully bought two local vodka boxes for the local people, which made a big party to the whole village.

33. Every year in Tomtor at the beginning of April the festival “Pole of Cold” takes place, to which the demo-frost fly from all over the world, as well as numerous tourists, and the festival as they can. They arrange competitions among demo-frost on snowmobiles, deer, as well as “Miss Pole of Cold” and “Mistress Plague” for local girls (emphasis on “y”). Why is the festival with such a name held here in April, and not, for example, in January? They say, at the request of the thermophilic Santa Claus. 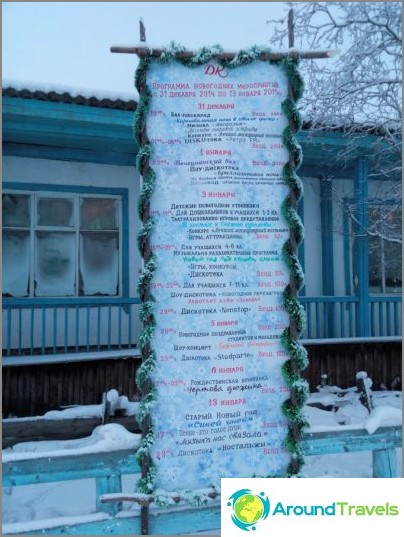 P.S. Acne does not blog, so here is the link to his Facebook account. You can also read about Yakutsk and Lena Pillarsas well as about road to Oimyakon.