Unsuccessful trip to Sanya and the need for an action camera

We decided not to triple with all this ourrehab, get out somewhere periodically. Usually we are all taken to the sea on our only day off (on Sunday), but sometimes the doctor-driver has something to do and he is busy. And it's not very convenient to go there yourself, it is better to go somewhere else, especially the sea is boring, a seal lies there every time.

Last time we got out ride a couple of hours on bicycles, and this time they decided to move to the most important resort of Hainan - in the city of Sanya.

A failed trip to Sanya

The calculation was simple: we come in the evening, walk a little, try food in a cafe, spend the night and the next day move to the center of Nanshan Buddhism, it is located outside the city. We walk in Nanshan half a day and return to Sanya, from where to Lingshui by the same route. I even decided to make a video, try again as a video blogger. However, from the very beginning everything went wrong.

Firstly, Egor from the very beginning was, likestung He, of course, is rarely calm, but then something got him through. And we had to first get by car to the railway station in Lingshui (our masseur drove), then by train to Sanya (25 minutes), and then by bus to the area with the hotel. Do not really relax, in the end, a kind of ekshnsh turned out 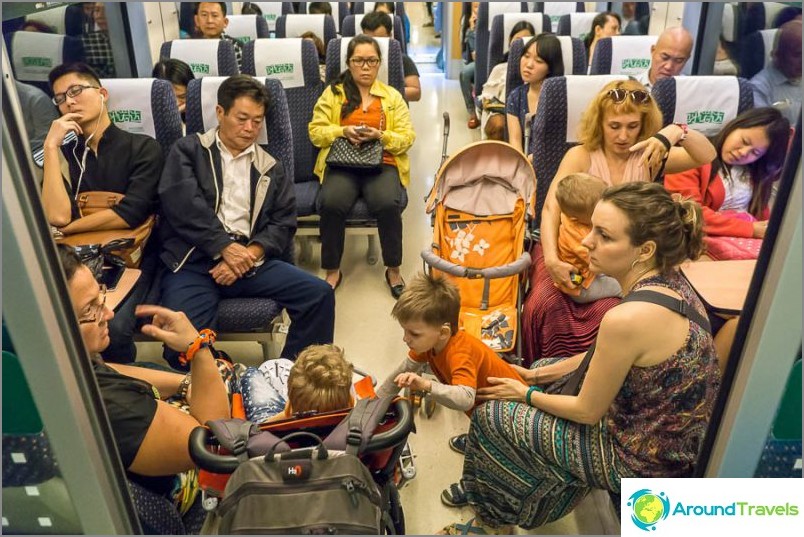 We are on the train, attracting everyone's attention 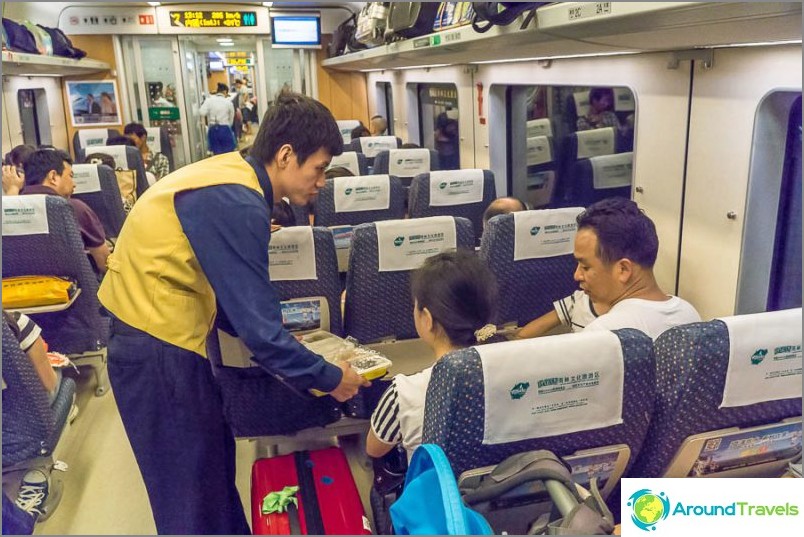 Food and drinks are served on the train. 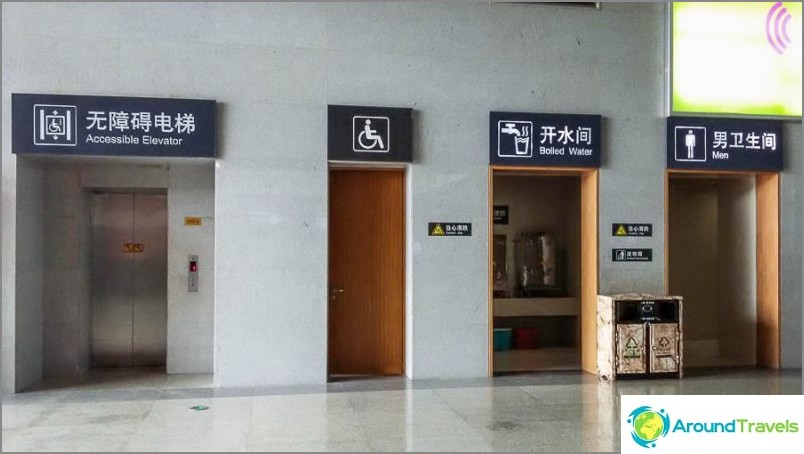 At the railway station there is hot water, apparently for local doshirakov

Secondly, I did not quite take into account that in ChinaThe GPS coordinates are somehow very cleverly shifted (plus the usual Google and satellite maps are shifted relative to each other). More precisely, I knew this, and therefore, as the most intelligent, I looked at the location of the hotel on the satellite map in RoomGururather than the usual. If you look at the usual, then there part of the hotels right in the sea is located and it killed me, I thought that it was the usual map that was wrong

As it turned out, the point should look at the usualmap (well, apparently, except for those hotels that landed in the sea) and do not use the coordinates that Google provides for this point. In general, when we walked along a completely different street and asked passers-by (well, I guessed it to print and take a print from the booking in Chinese) where the hotel was, the Chinese helped us by riding a moped. Brought to the hotel itself, although it was quite another street. 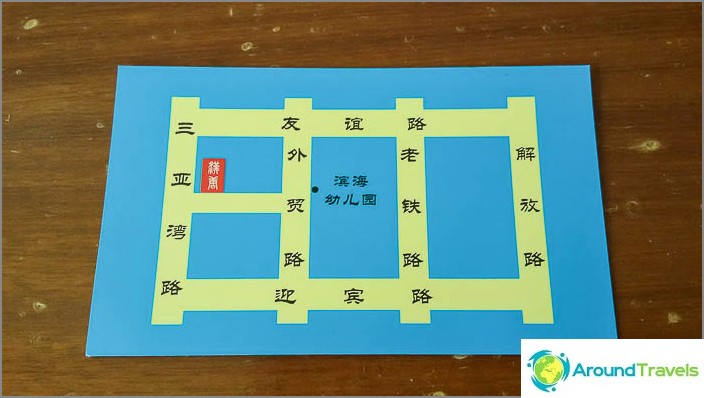 The hotel issued a business card - yeah, very clear all

By the way the hotel was cool: location, cleanliness, price, and even considering the course cheap. And we especially liked our room, as I call it, in Japanese style. The mattresses are almost on the floor (on the podium), and a low table, behind which you can only sit on pillows (my review of the hotel in Sanya). And next to the hotel there are a lot of cafes, one of which we wandered into, a small eatery with Muslim food. All 4 dishes were very tasty. True, my salad, which I ordered from the picture (here only to poke pictures in China), turned out to be really hot and half-baked potatoes. An interesting combination. 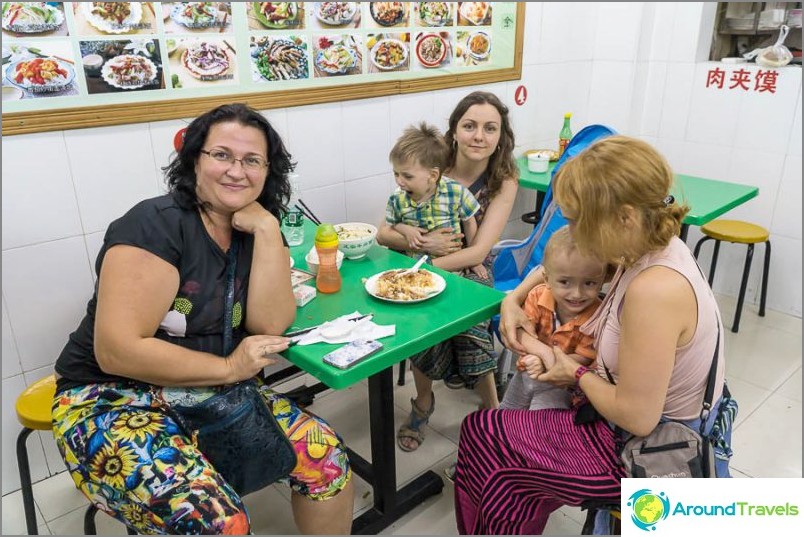 Trying to calmly eat, but not very good 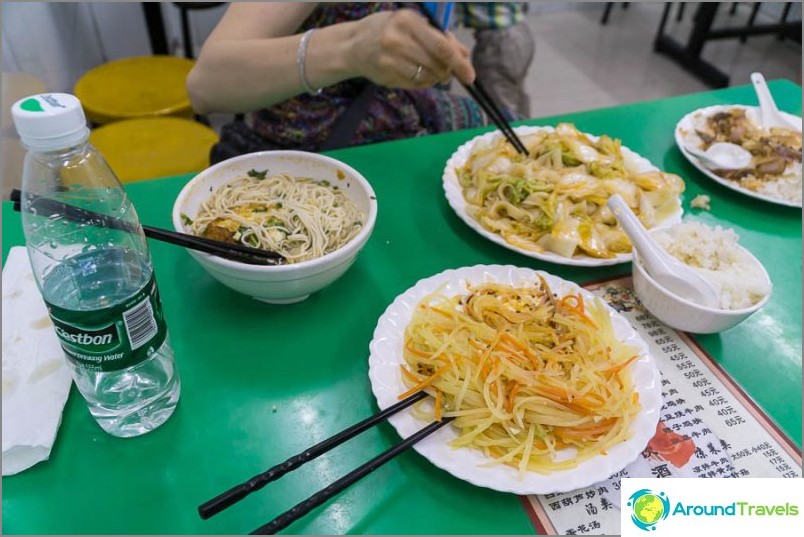 In the foreground is half-raw, but hot potatoes - very tasty!

Thirdly, Yegor got sick, so in the morning when wewoke up, decided to score on Nanshan and go back to Lingshui. We reached the sea, made a couple of pictures, caught a taxi, drove to the station and returned. That's the whole trip

Despite this, something so pleasant impressions left ... 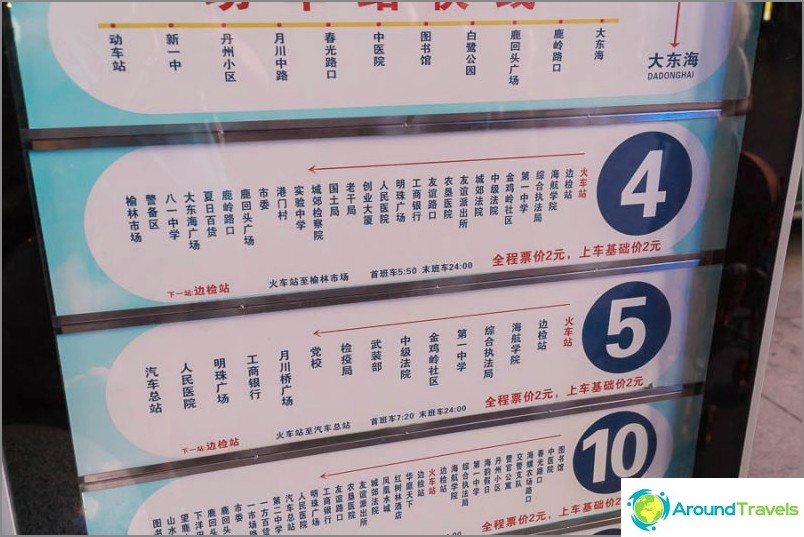 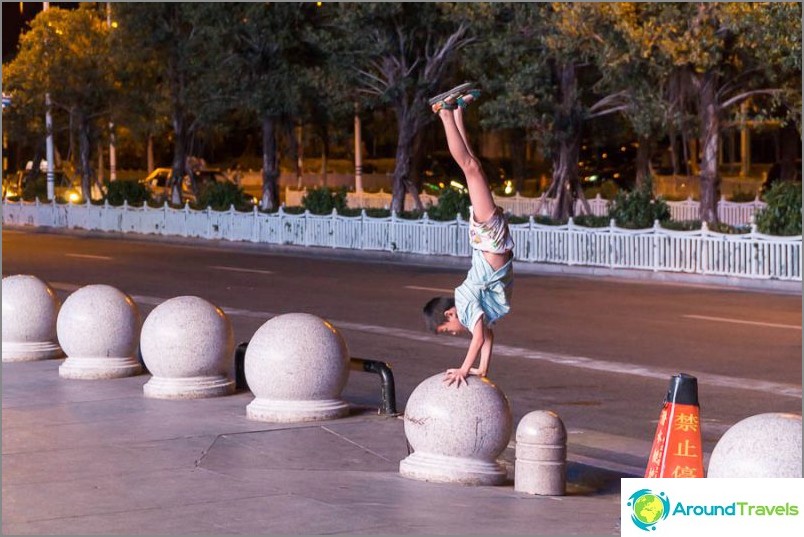 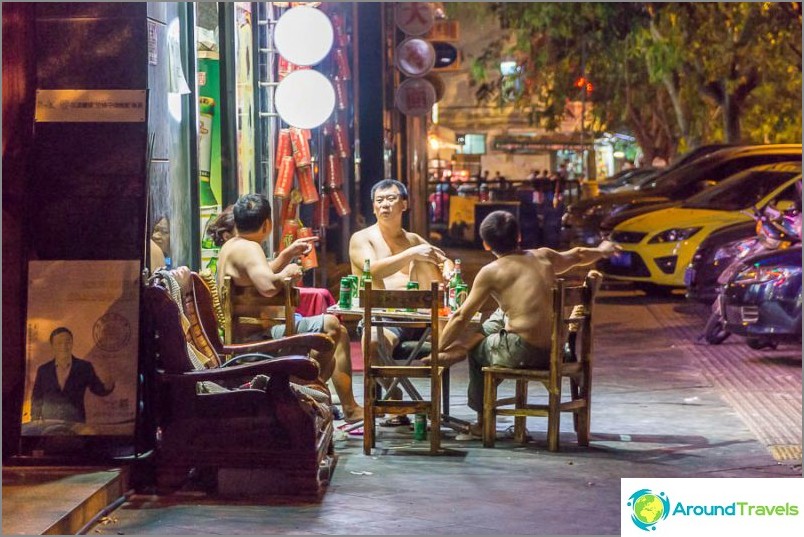 On the streets of Sanya 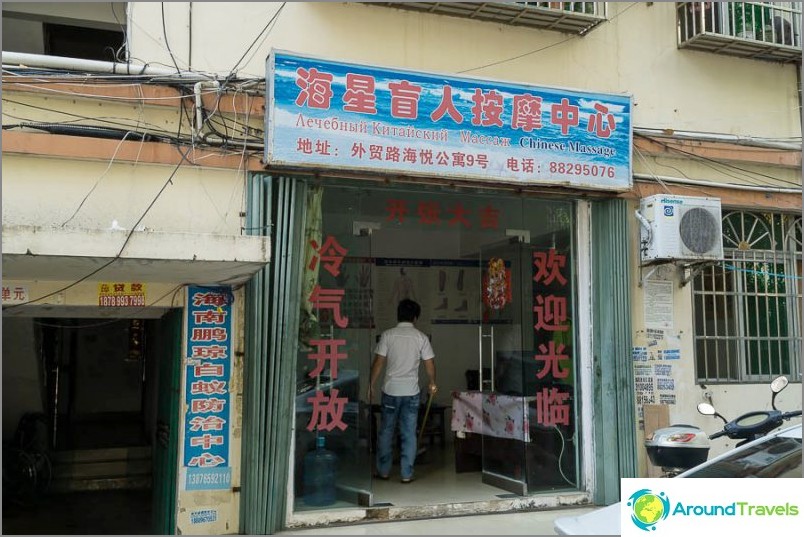 Russian inscriptions are not uncommon in Sanya 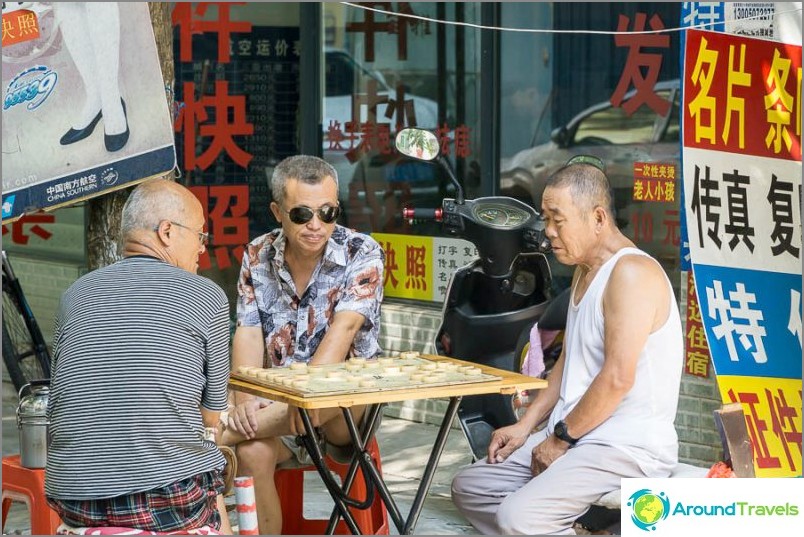 The chinese are playing something 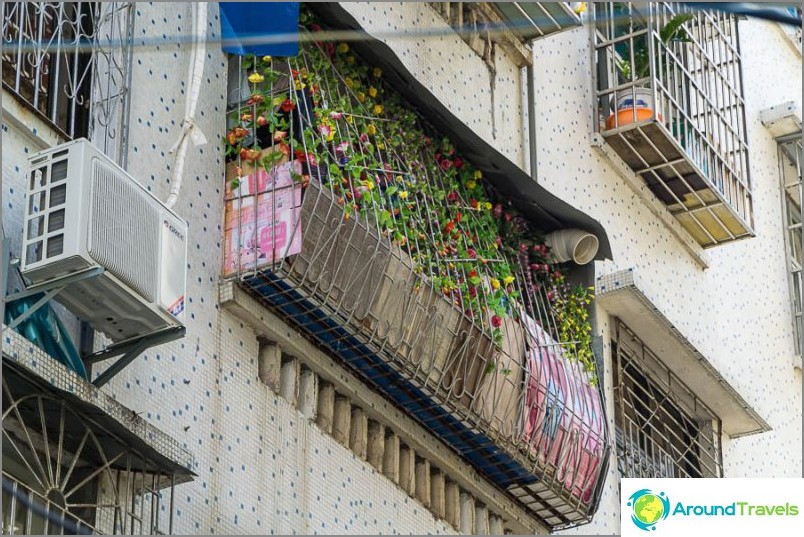 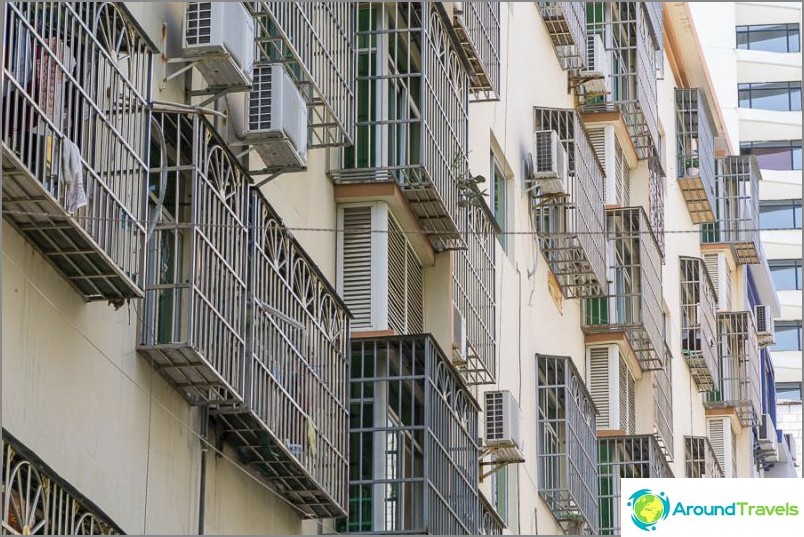 In Sanya, for some reason, many windows are closed with bars. 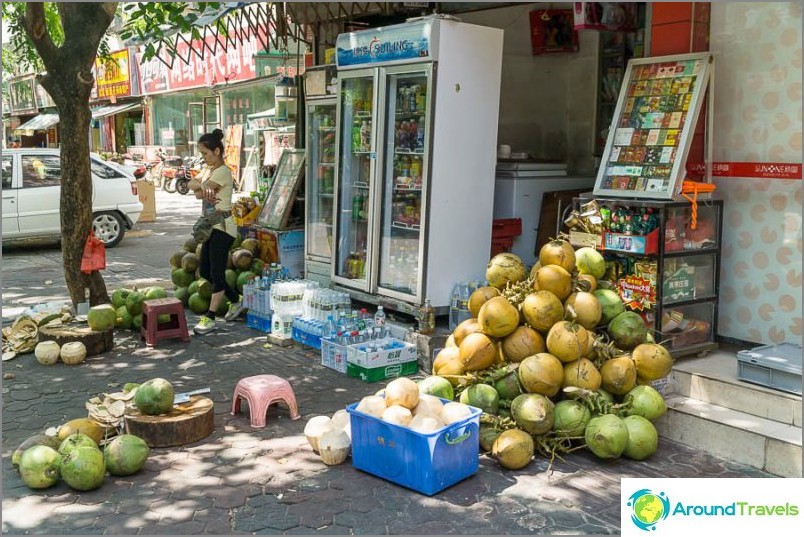 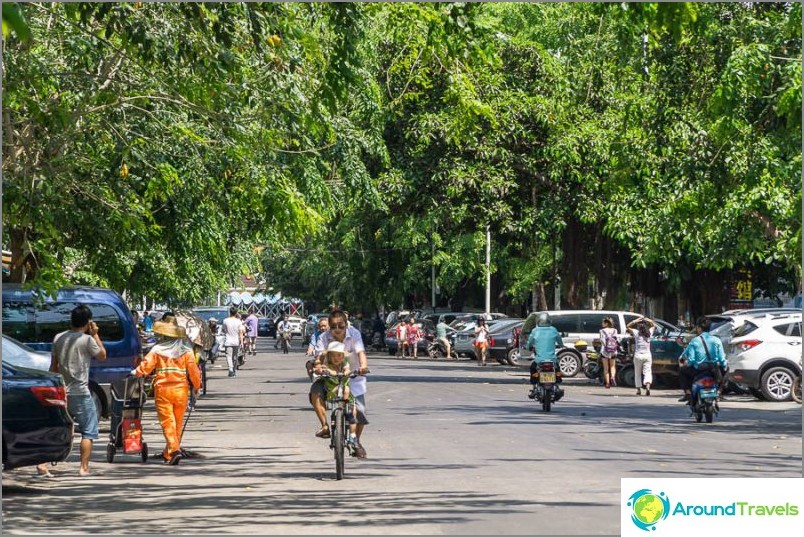 It's nice when trees grow outside 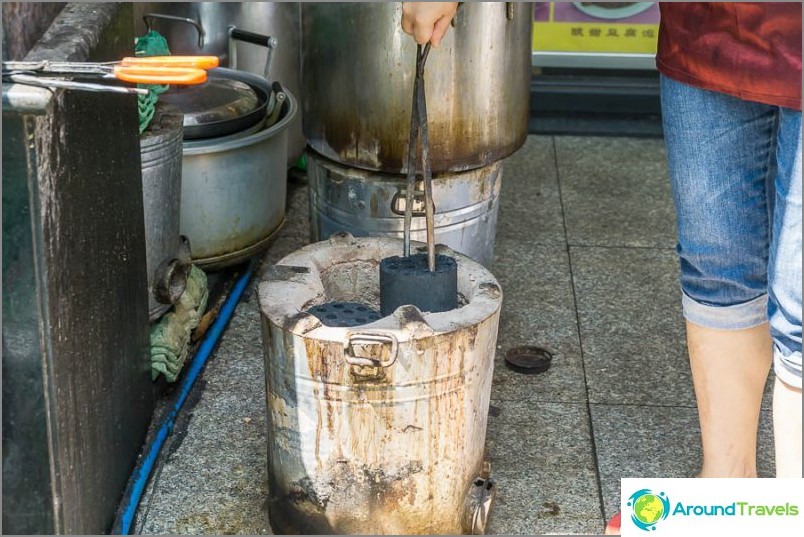 These round bricks are warmed up outside, and then carried to the kitchen. 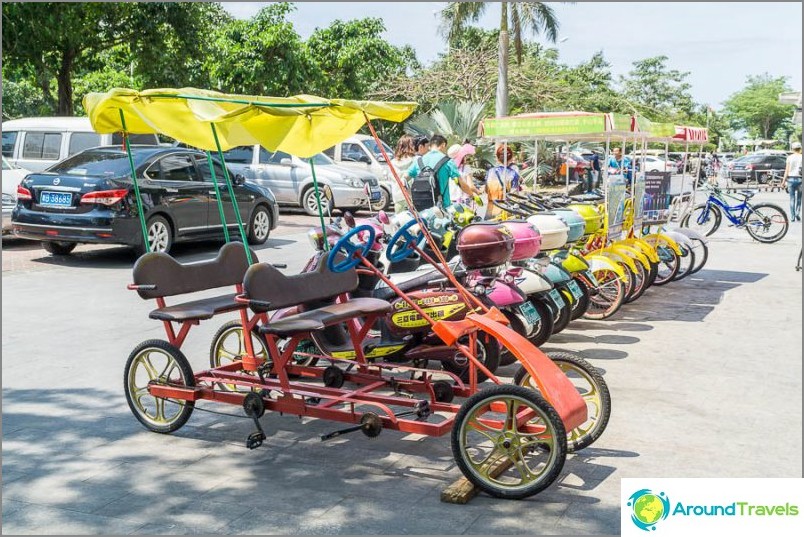 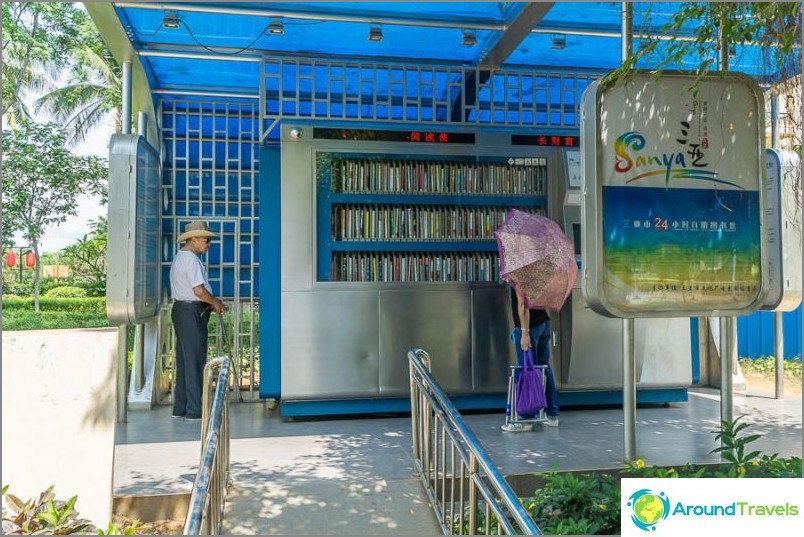 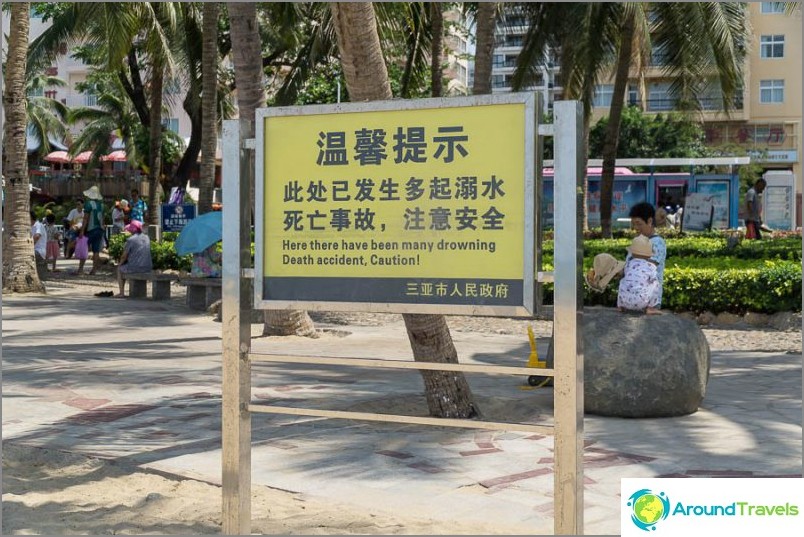 Swim here is not recommended 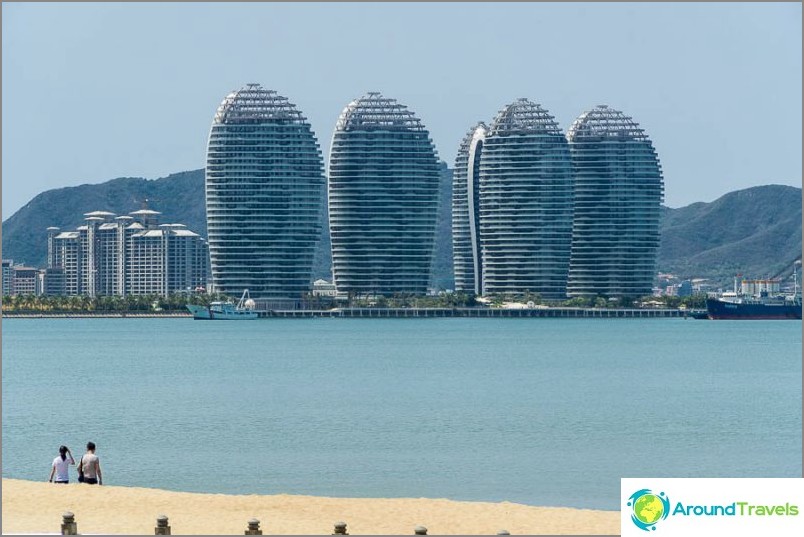 The coolest hotel on the island, flashes at night with different lights 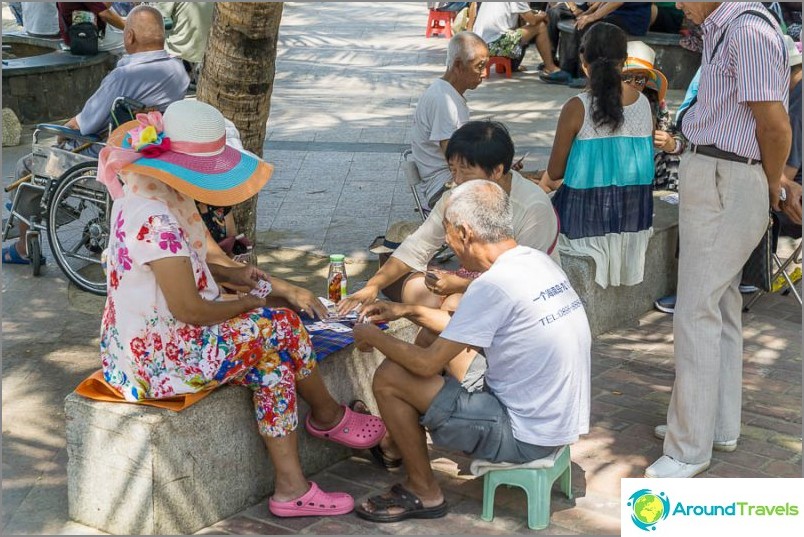 On the waterfront domination of pensioners - they play cards 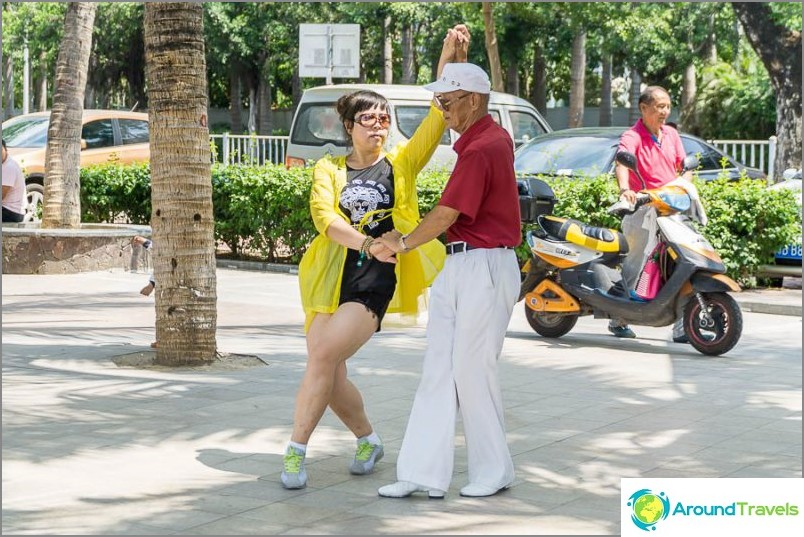 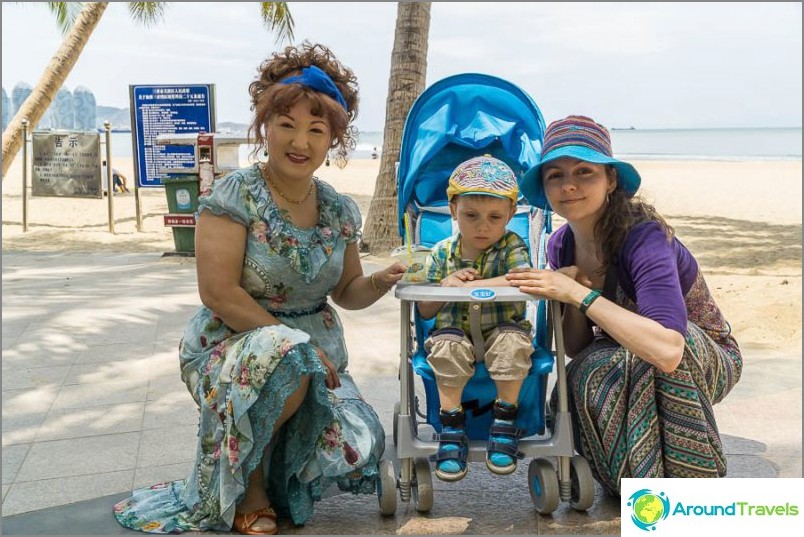 Of course, many do not mind to take pictures 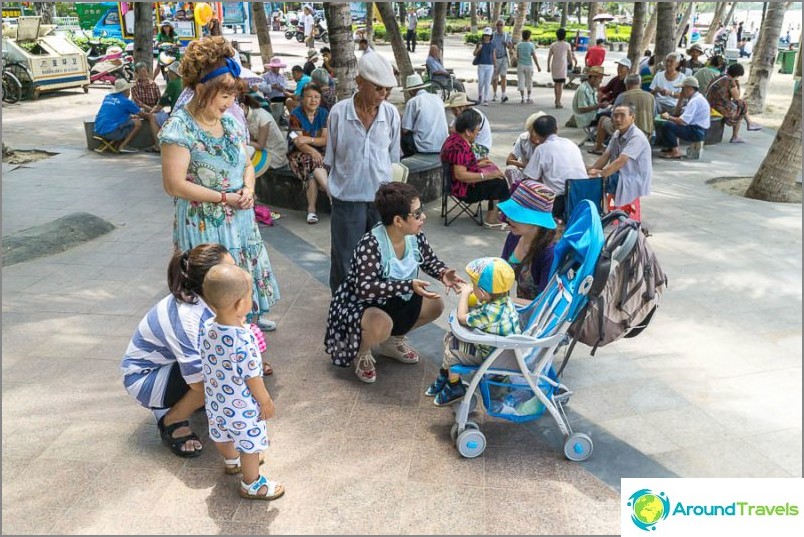 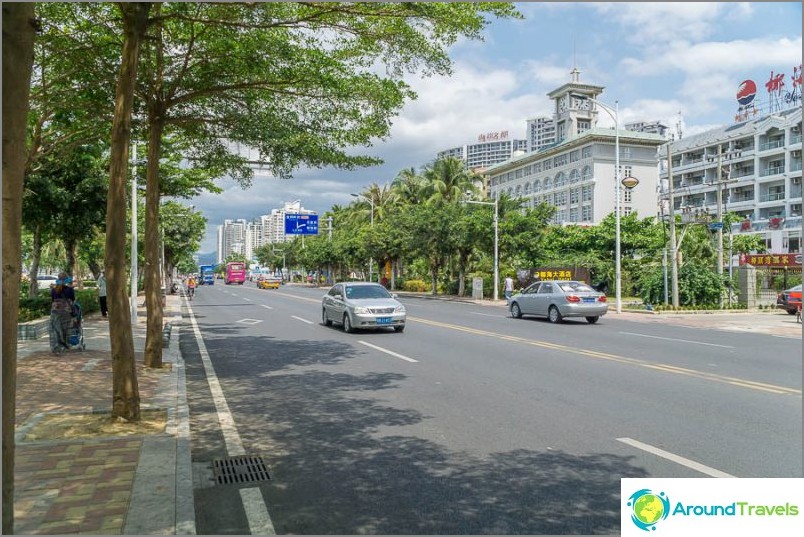 Sanya City - expensive along the coast

Fourth, I realized that a bunch of Sony a6000 +18-105 is absolutely not suitable for video shooting. This big bandurin dangles around his neck and strives to constantly bang on Egor’s head or to break on some kind of metal rail. Why this happens, it will be difficult to explain, it is necessary to see how we move))) Egor wanders from hand to hand, from the sling to the stroller, that is, he must be intercepted all the time. In general, fotik around the neck terribly interferes. And if you remove it in a backpack, then you get the FIG. Therefore, the thought appeared to buy some alternative to Go Pro (cheaper), so that it lay stupidly in your pocket, or was generally attached to the wrist (without fear of losing or damaging anyone) or to the backpack strap.

Advise, pliz, models of eksh cameras. For me, this is a completely new device, before I shot video on cameras, but I understand that they are not suitable for this in my case. How once switched to mirrorless mirrors, so now it's time to buy a special camera.

Ayutthaya, the ancient capital of Siam - the hunt for ...