Luang Por on Samui is an impressive size.statue of a monk, which was built on the territory of the temple Bophutaram on Bo Phut. It represents a building in the form of a ship on which an old man sits with his foot dipped in water. Moreover, “into the water” does not mean literally, although the entire structure stands on an artificial reservoir and not just like that, but with meaning. Luang Po Tuad is a Buddhist name and honorary title at the same time, and translated from Thai means “dear father”.

Temple with a statue of a monk on a boat

The person to whom the statue and the building is dedicatedher - quite real. In 1582, in the family of a poor Malaysian farmer, a boy was born who passed a worthy and wonderful life of a Buddhist and after a hundred years ended his days in Thailand. He was interested in Buddhism from an early age, with the support of very devout parents. From the age of five, he received lessons from teachers in temples, and this science was given to him surprisingly easily, which immediately affected his way of life: after all the surrounding temples gave their knowledge, Luang Po went on a journey.

In one of these trips and happenedthe story that gave the main motive of the composition in the courtyard of the Bophutaram temple. Heading by the sea to Ayuttayu, the then capital, Luang Po fell into a serious storm, after which the ship went astray. The storm did not subside for several days, the water supplies were coming to an end, where to swim - it is not clear ... well, the ship’s crew quite seriously decided that the cause of all the troubles and their inevitable, seemingly death, was this alien monk.

Without waiting until the team throws it behindboard, Luang Por Tuad began to pray sitting on the edge of the boat and dropping one leg into the water. The sea is quiet. People too. And the monk ordered the quiet people to quickly grab the bucket and draw water overboard, which turned out to be fresh. So they got to their destination - without loss, and in reverent silence. 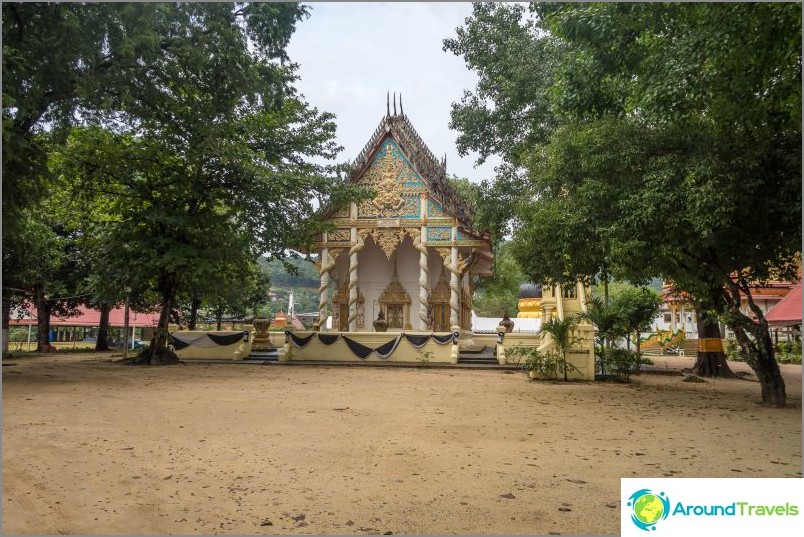 The temple grounds are quite ordinary. 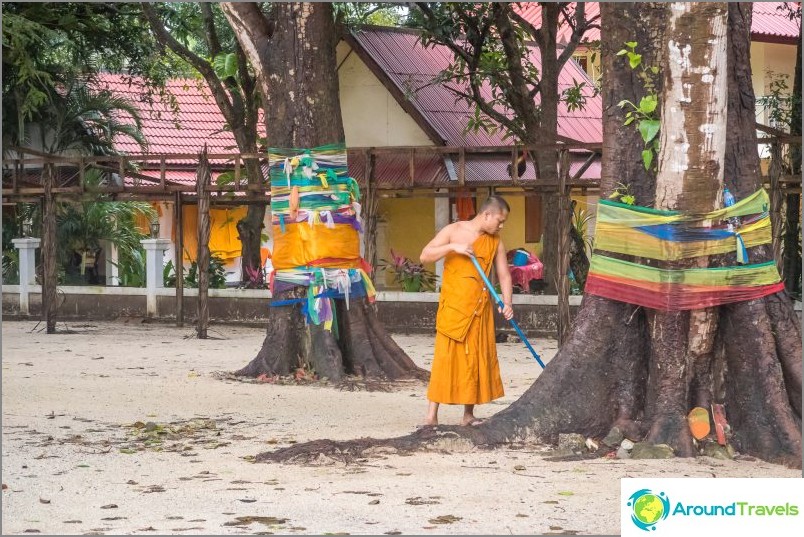 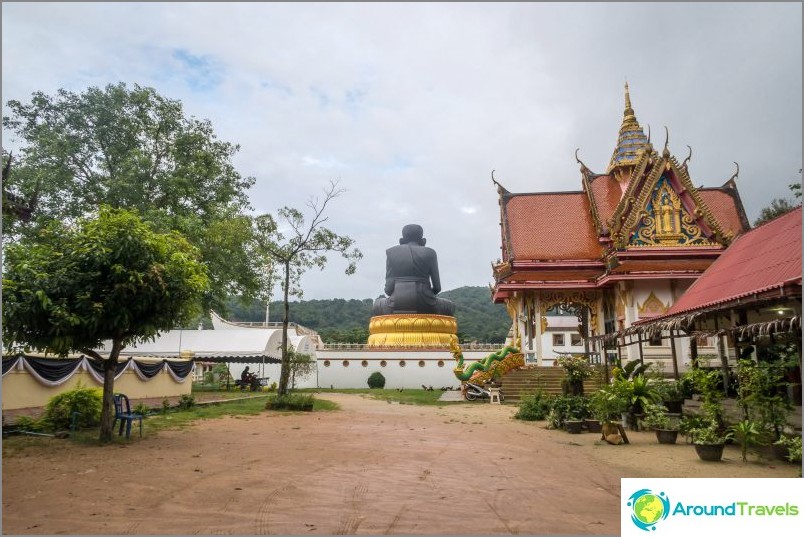 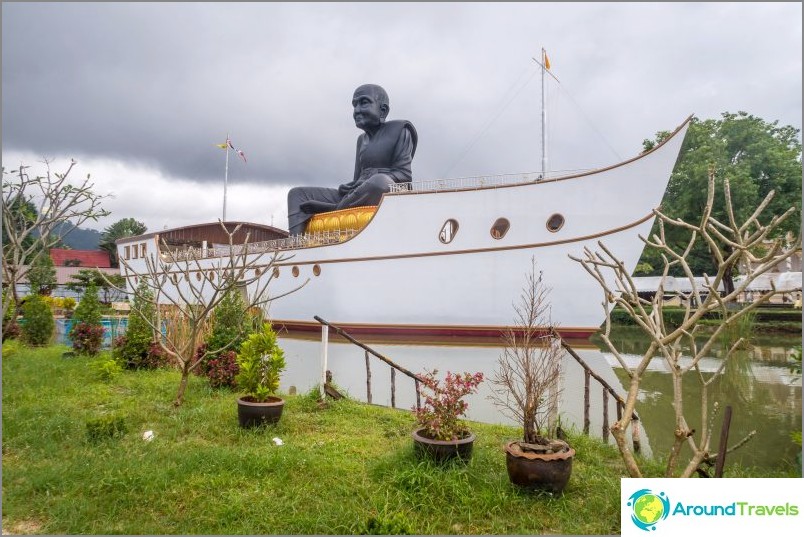 Black monk sits on the boat 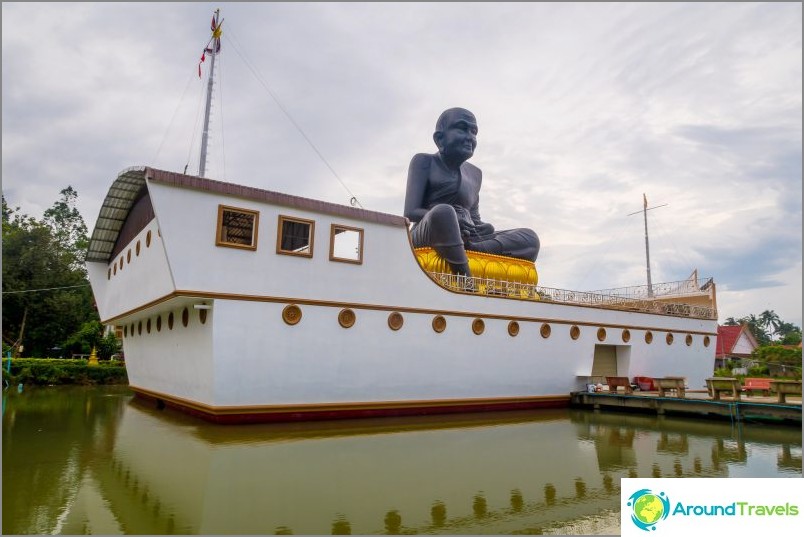 Temple with a huge black statue of a monk on Samui 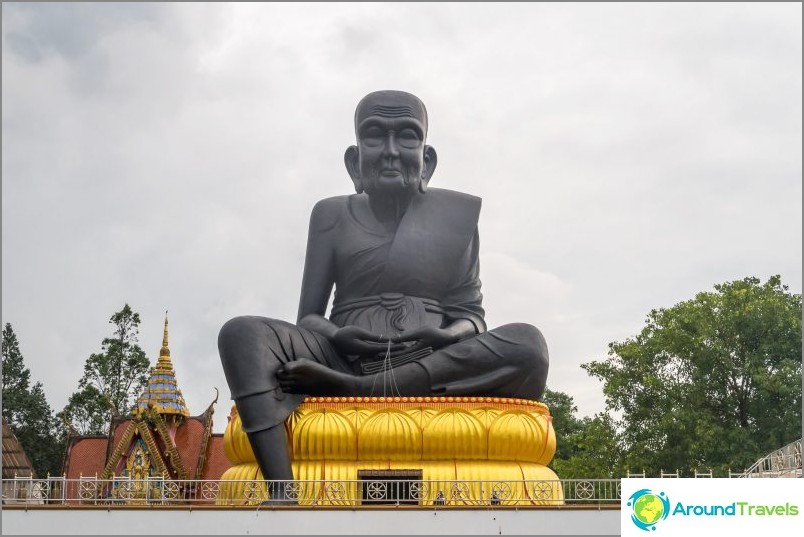 Luang Po - a statue of a monk on Samui 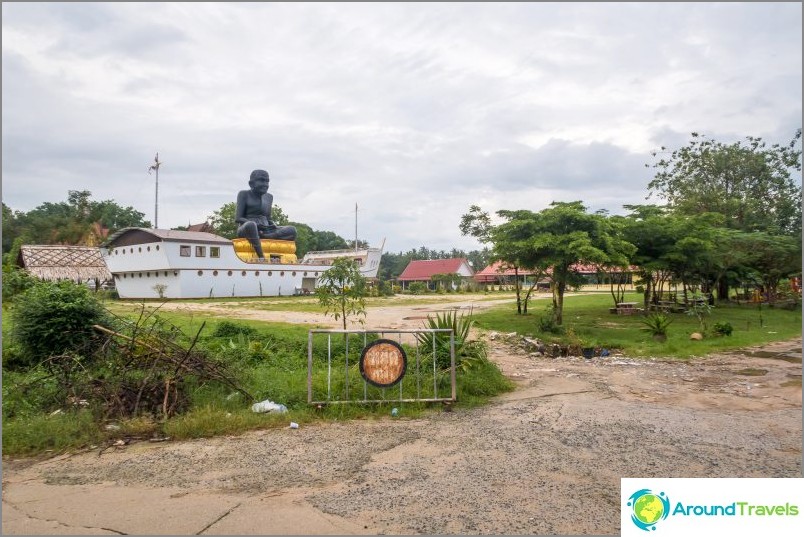 This temple reminded me personally Black Monk in Hua Hin, the story is different, but it looks like everything. And everything is also done on a large scale, the figure is visible from the road. Take a look, look. If you have not become boring Thai temples, then enjoy it. Honestly, I drove past this temple many times, but until they had this huge statue, they had no desire to go.

To throw money in the box with donations, or notthrow - always remains at your discretion. Given that all this splendor is built just for donations - you should not be greedy, otherwise they will not build new sights. And the Thais make it beautifully.
Later in the evening the building with the boat is closed (at least it was in my arrival), so if you want to go up to the statue of a monk, come early.

Statue of monk Luang Por
The sculpture is the size of a Big Buddha. Not yet the most popular, but noteworthy Buddhist landmark.
More about the statue. 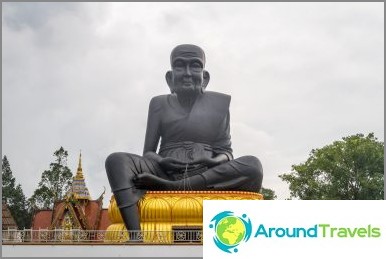 The sculpture is the size of a Big Buddha. Not yet the most popular, but noteworthy Buddhist landmark. More about the statue.

Visa for 5-20 years under the Thailand program ...