Trip to Cyprus and island flooding

Today Olya (Nia) decided to tell us about her trip to Cyprus. If you have an interesting story, write us an email. This concludes my introduction.

A trip to Cyprus was organized completelyby chance, however, like the rest of my trips. Going to rest, but it was in November, the question was only in one, Cyprus or Crete, and by the method of simple logic and simplification, the choice fell on Cyprus, which I didn’t regret about as a result!

The trip was on the voucher, that is, for earlierbooked hotel not far from the city of Limassol, meals and airfare to Larnaca (and you can buy your own plane tickets on Aviasales.ru and Skyscanner.ru). And this event was organized for seven days. About the fun of the flight itself, I probably will not tell. I think everyone who flew someday would find something to tell on this topic. 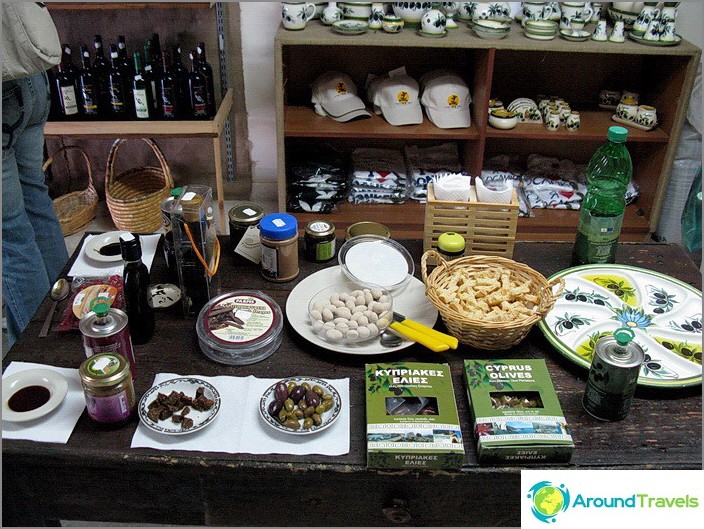 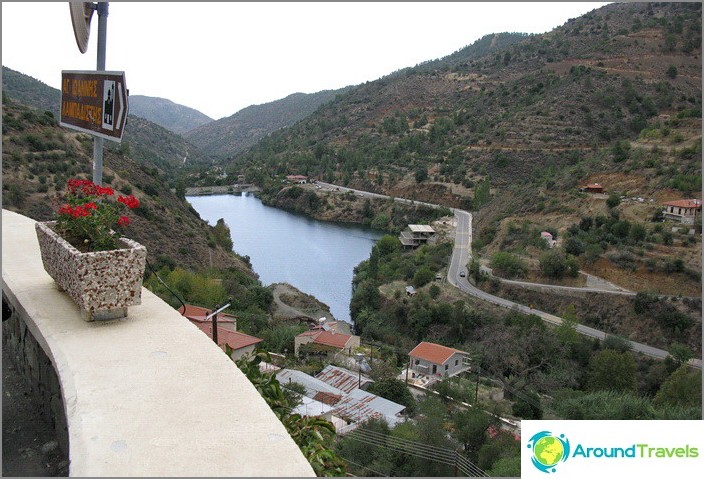 The largest reservoir on the island. 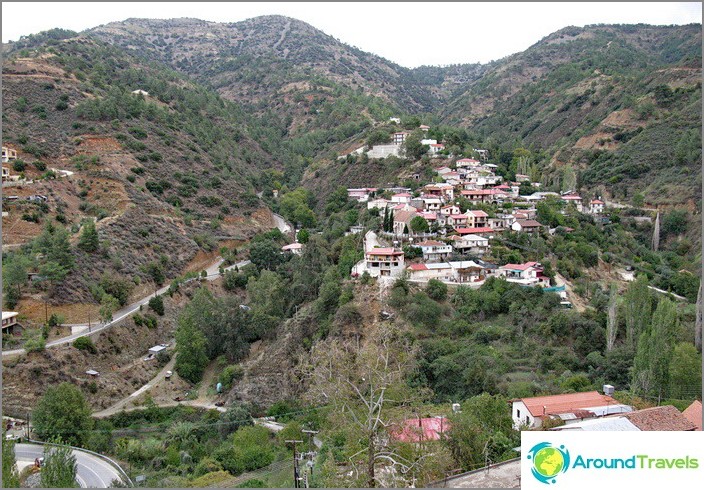 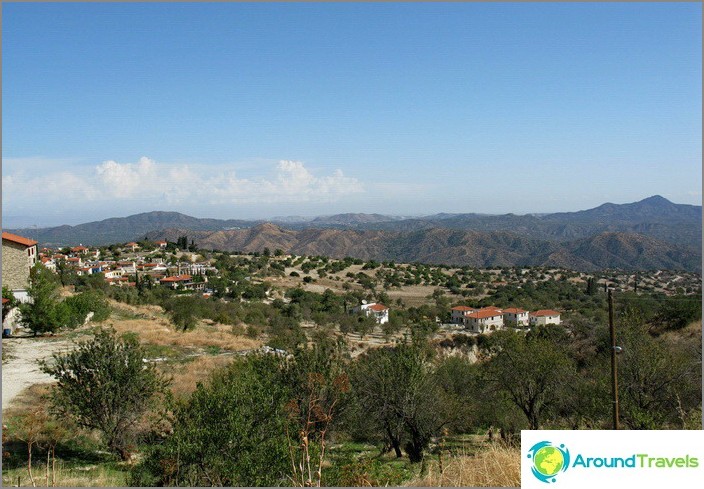 I'll start right from the place of stay. We flew into the glorious city of Larnaca, which is on the very coast of the island. It was struck by the fact that just a few meters from the runway, the sea had already begun. On the one hand, this is a bit scary, but on the whole the spectacle is fascinating!

While the bus was carrying all of our Russian brethren alongthe coasts of the beautiful island of Cyprus, settling all around the hotels, were a little surprised by the words of our guide, who, having shown to the extensive coastal area, densely built up with rich mansions, said that this is the area of ​​rich Russians. And at home there is really big and beautiful, you can immediately see the breadth and generosity of the Russian soul, especially in relation to your loved ones.

The hotel in which I had to spend mythe long-awaited vacation turned out to be quite comfortable and cozy. Separate two-story houses, a swimming pool (seemingly even with clean and uncluttered water), a eucalyptus grove separating the hotel’s territory from the seashore, and quite nice attendants who were even partially Russian-speaking.

If not much to go into the details of the entire trip toCyprus, I would like to note and tell about one of the days that I remember, for the rest of my life, apparently. Somehow, enough to lie on the beach and decided to diversify my holiday on the island of Cyprus, I decided to go on my own to the second largest resort on the island - the city of Limassol. It was not difficult to do this. Having bought a bus ticket, and having reached the embankment of Limassol, I decided to go deep into the city in order to plunge into its flavor and local lanes. At the same time, I noticed out of the corner of my eye that somewhere far away, on the other end of the coastline, the sky began to turn blue from the clouds, but I did not attach much importance to it, as usually, if it rains at sea, it’s not long and long the weak. I didn’t even have an umbrella with me. 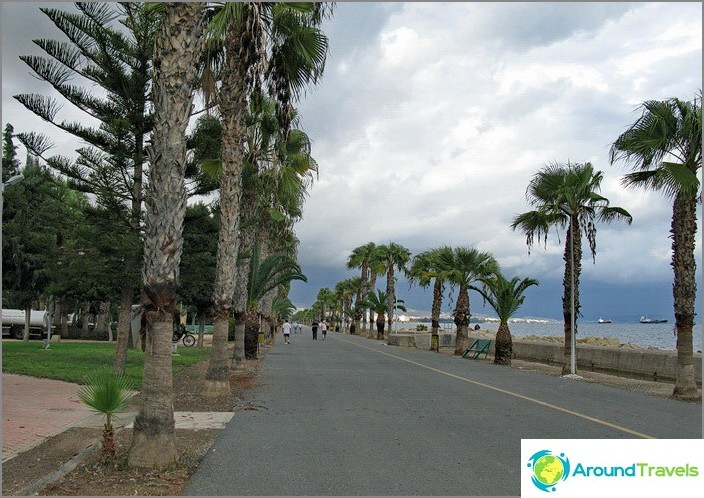 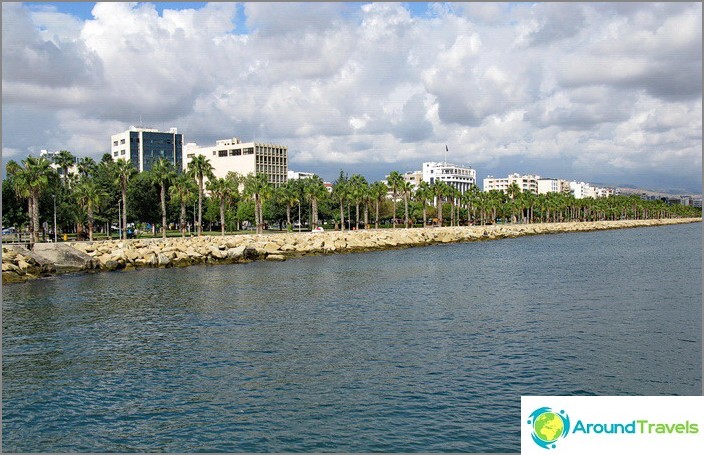 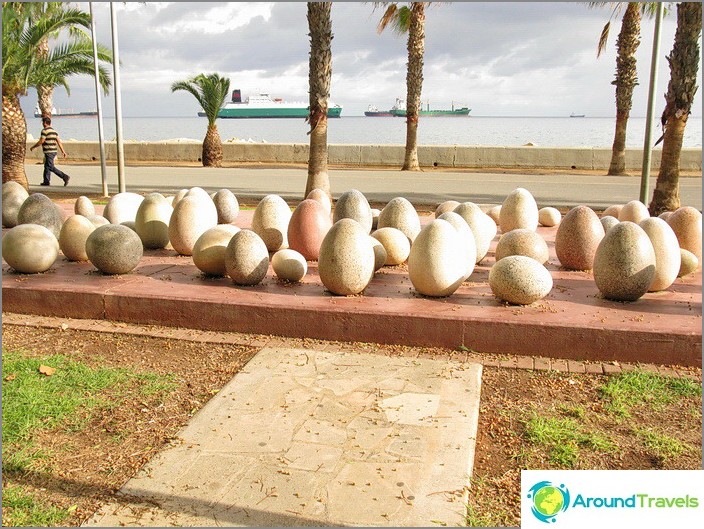 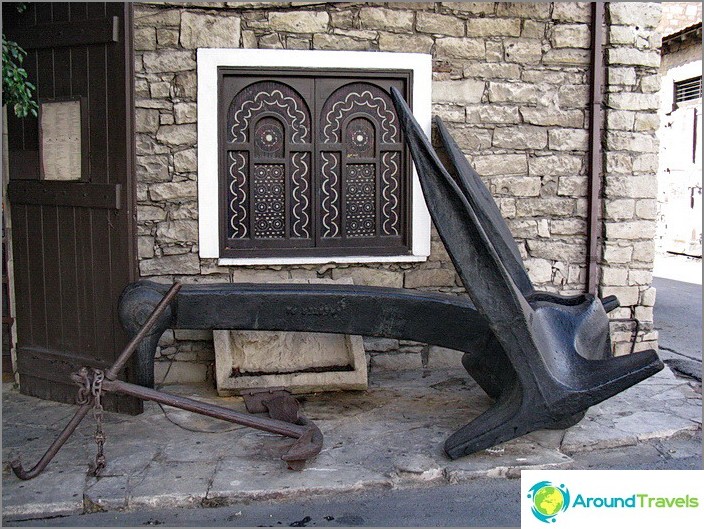 Walking through the city center and finding a lot thereinteresting places and attractions, I decided to go back to the embankment and walk to my hotel on foot. It was about a little more than an hour, but the prospect of spending this time near the sea made me very happy. And only when I went to the sea, I realized that maybe my idea was a bit premature and I should reconsider my plans in favor of the bus. The sky over the part of the island where my hotel was located was not, not blue, it was literally black from thunderclouds! At first, I thought (naively) that perhaps all of this was not yet completely serious and the clouds would go aside, passing Limassol with their rains, but it would probably be too good to become true.

As a result, when the sky turned black already directlyover my head, I realized that I didn’t just have to start searching the bus now, but I’d better do it immediately, bearing in mind the thunderstorm that had happened the night before almost the entire southern coast of Cyprus. And that storm was so strong that for the first time in my life I almost cried from fear, being in my room, about once every five minutes I was stunned (in the literal sense of the word) by its peal that seemed to be right above the ceiling.
I did not have time to run to a stop, as lebanulsuch rain, which in common people is called “wall”, I would add - concrete. Vymoknuv for a minute through, I still managed to jump into the bus. After passing a few stops, I noticed that the rain was almost over and decided to still try to walk to the hotel on foot, since I had already driven almost half of Limassol. But it was not there. After about five minutes. Started the second wave of rain. Even stronger than the first. I only managed to jump into the nearest cafe, that I could wait out this bad weather.

A little dried out and a good lunch, in Cyprus,By the way, quite a good kitchen, I saw that the rain had ended after all and you can move into the hotel, as was previously planned. But when I left the cafe, I suddenly encountered a new and rather unexpected problem for me and the rest of the people - the roads and sidewalks were completely flooded! Cars were almost at the door in the water in both directions. There was no visible sidewalk under the water. The only solution that came to my mind at that time, because I felt sorry for my shoes, it was a blow-out, to remember golden childhood and go to the hotel barefoot. 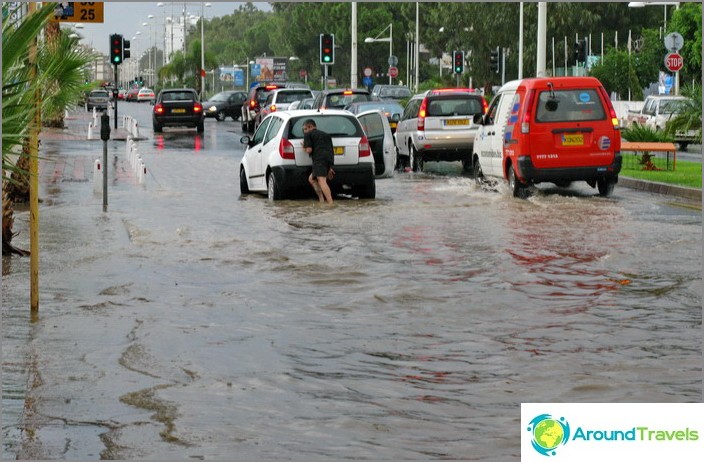 Flooding in Cyprus after a rainstorm. 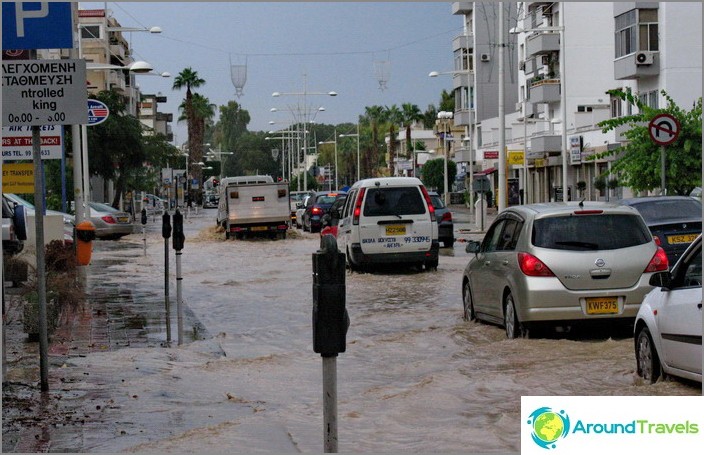 Oh, how many interesting and funny sentences andI heard comments during this walk! Apparently the locals were completely unaware that the sea, the temperature plus 26 and the sun for the Russians are in the summer even in November, and I was barefoot, it was clearly a rare sight for the population of Cyprus. And standing knee-deep in the water and pushing their cars, they most likely secretly envied me ... And when I met an elderly couple on the way, who apparently thought the same way as I, too, walked barefoot, I became much more cheerful, we mutually smiled at each other and continued his own way, each on his own business.

Later at the hotel, I learned what a flood is andfor the inhabitants of the island themselves was a wonder. But the sight of the cars passing by and walking almost knee-deep in water was really quite funny and certainly memorable! Here is such a trip to Cyprus turned out.

Tips for tourists in Turkey and vacationers