Ahshtyrskaya cave in Sochi - my review of the popular attractions

Akhshtyrskaya cave near Adler is oneof the popular and easily accessible attractions of Sochi, where you can easily go with the whole family. There is nothing extreme here, the car can be parked right near the ticket office, and the cave itself will not allow anyone to get lost and be lost.

If you were not in the caves, or just love them, then you are here. There is also the second known cave - Vorontsovskaya, but the path there is already more difficult.

On the way to the box office you will notice a series of posters about life.primitive people who for some reason were stuffed into a thicket and are not read from the road even by people with good eyesight. On the right in the course of the movement there are mock-ups of an ancient apiary and posters describing the traditions and culture of beekeeping, and next to the cashier there are stands where tourists can learn basic information about the sights. 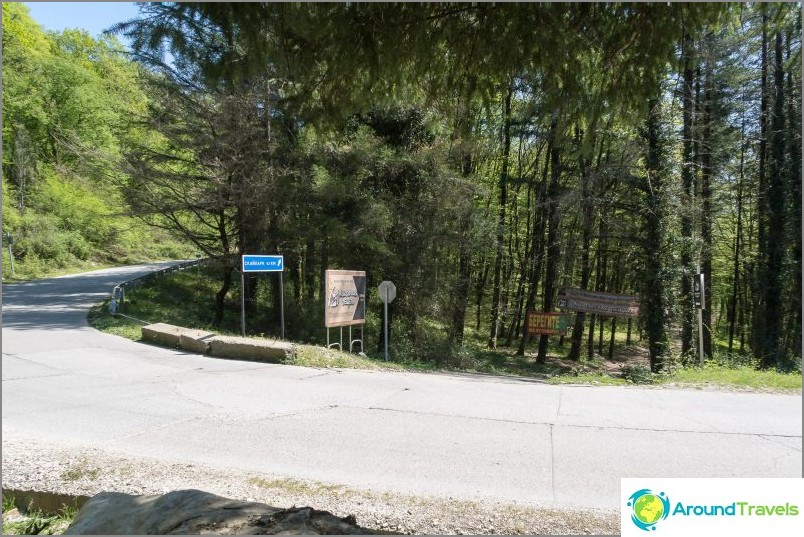 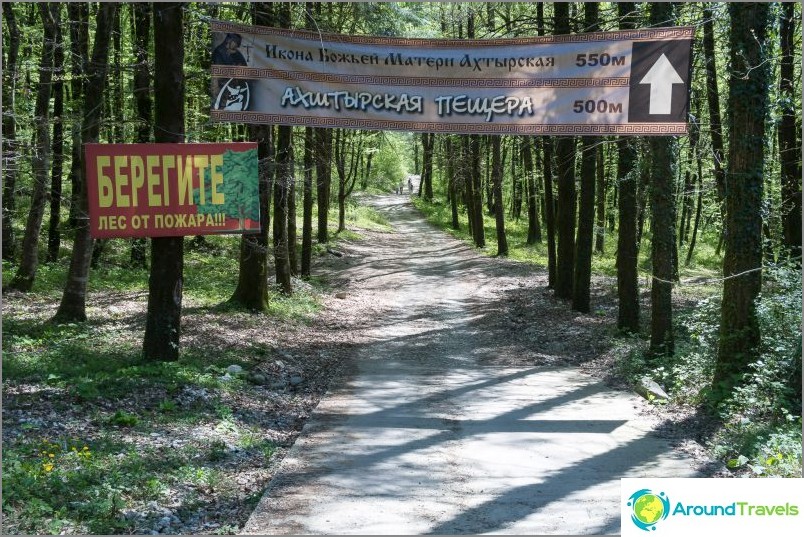 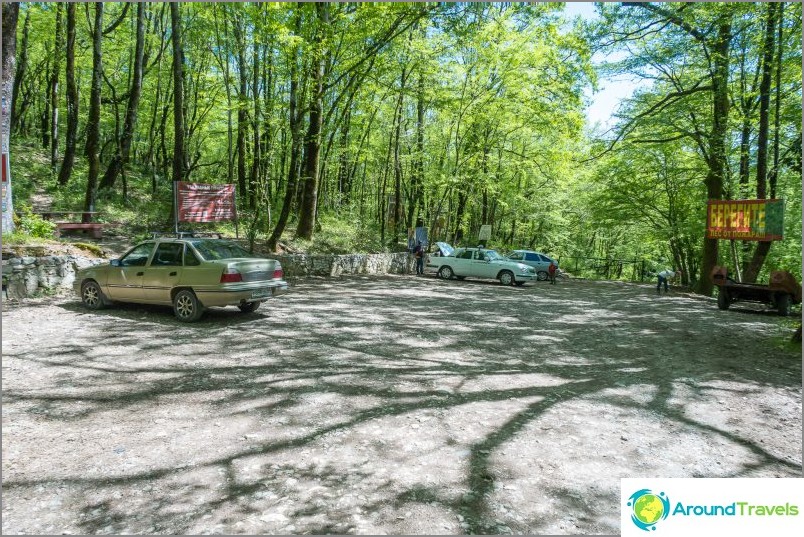 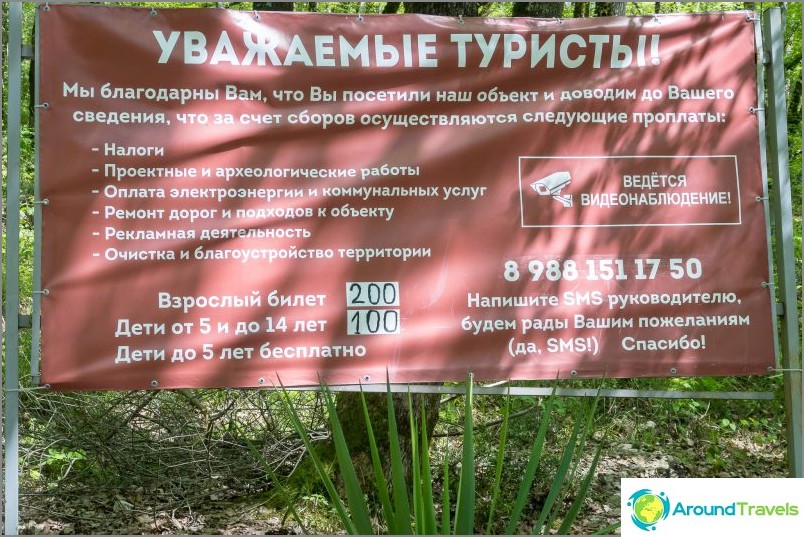 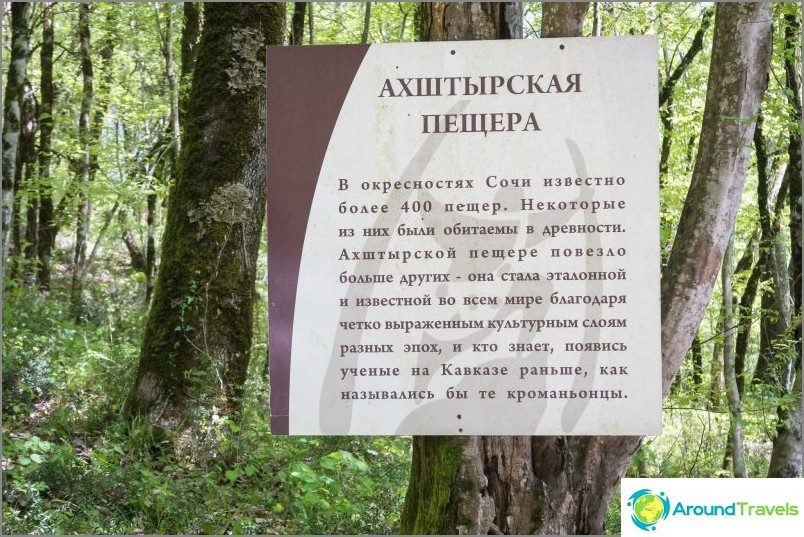 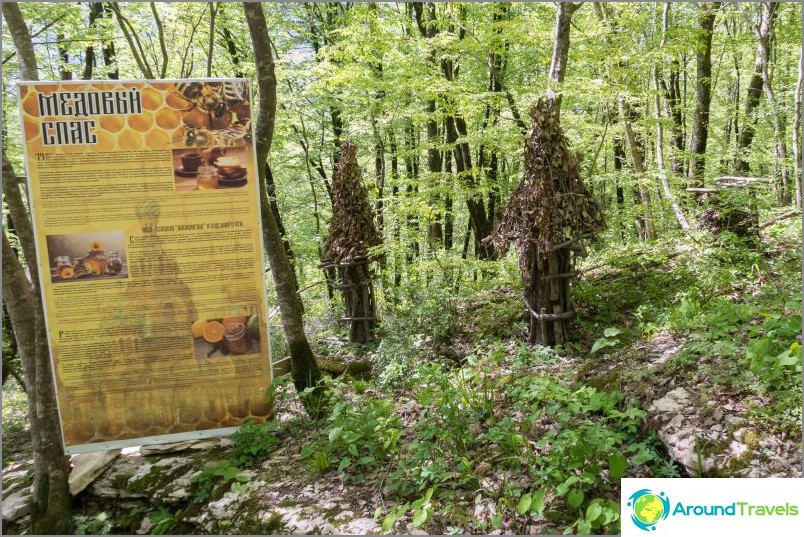 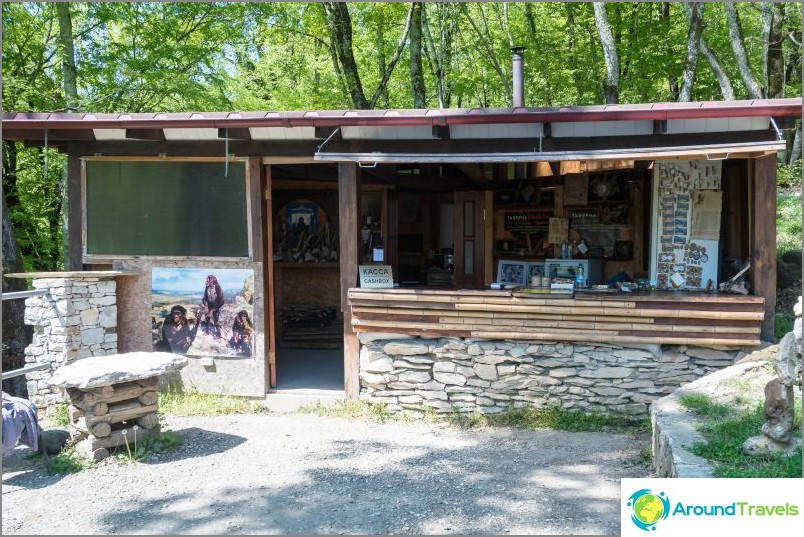 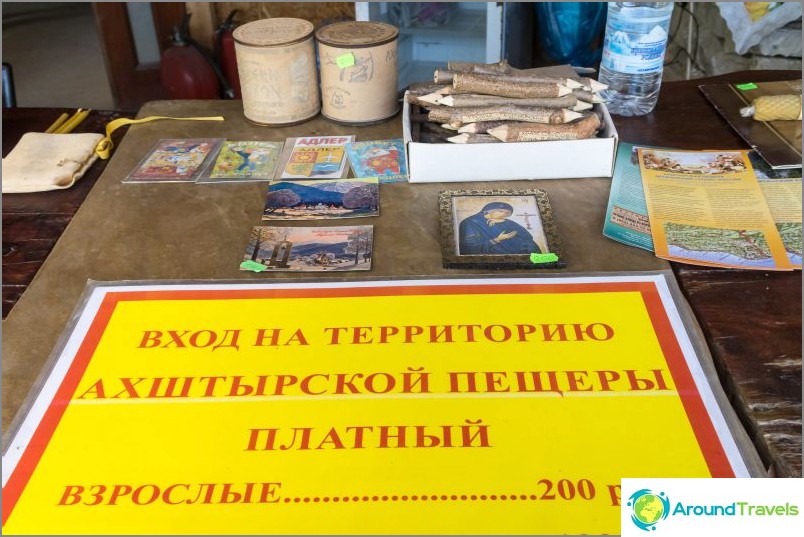 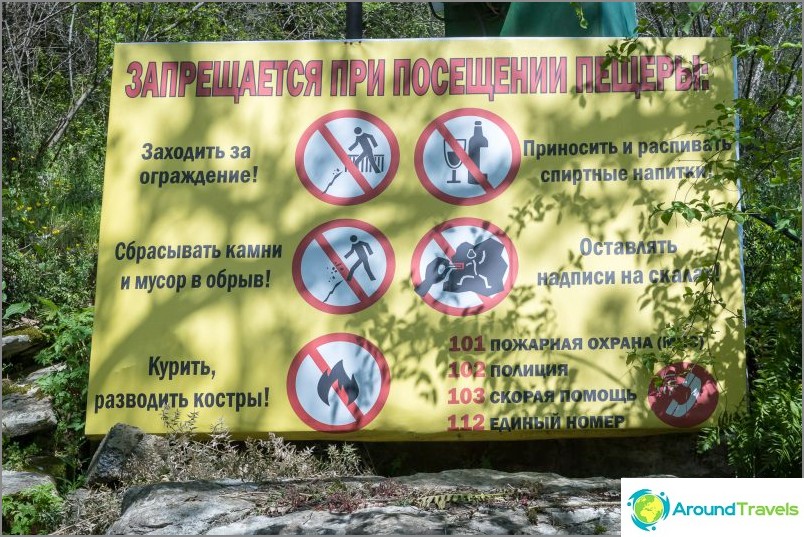 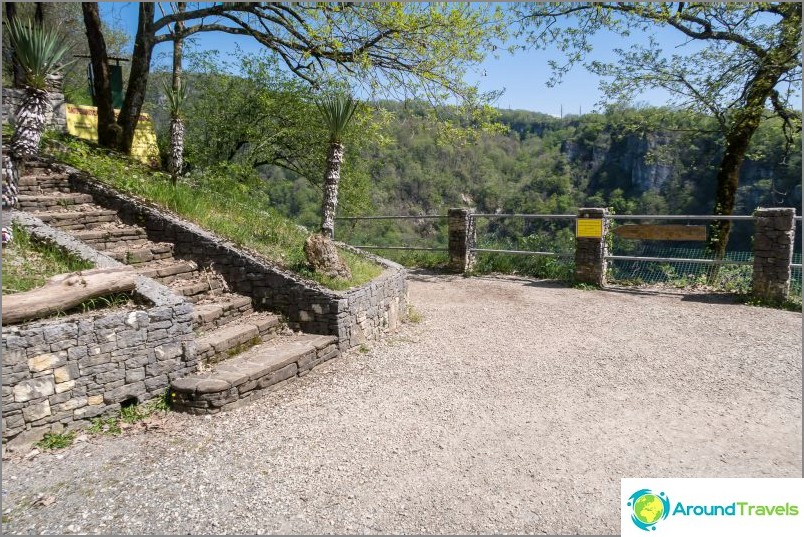 Go to the cave for a short time, literally two minutessteps, a good viewing platform overlooking the canyon and the Mzymta River, through which the Skypark suspension bridge stretched. The passage to the Akhshtyr cave is located two meters below the lookout, through a rock full of holes. Then there will be steps to the corridor, where archaeologists excavated in 2001 - here there are still signs stating the approximate age of each cultural layer in the thickness of the earth. The corridor is quite low, adults and children have to walk bent over in a belt, and some even frighten it, and during my time one girl turned around halfway. Feelings are not really the most pleasant, and even without claustrophobic you begin to feel discomfort.

The cave itself consists of two large halls,in which you can walk freely to your full height. The floor is clay, chomping on moisture with every step, and in some places it was reinforced with wooden flooring - apparently it drips well from the arches during the rains. At the end of the second hall, there is a very high whimsical vault with bursts of rock and a sharp stench from the bats living there. Mice are not shy, apparently already accustomed to the constant visits of tourists. Inside there is lighting, cool, damp, dead earthy air and no one wants to stay here for a long time. If desired, and the presence of a tripod, you can take a few pictures, but it is better with people in the frame to show the scale of the interior. 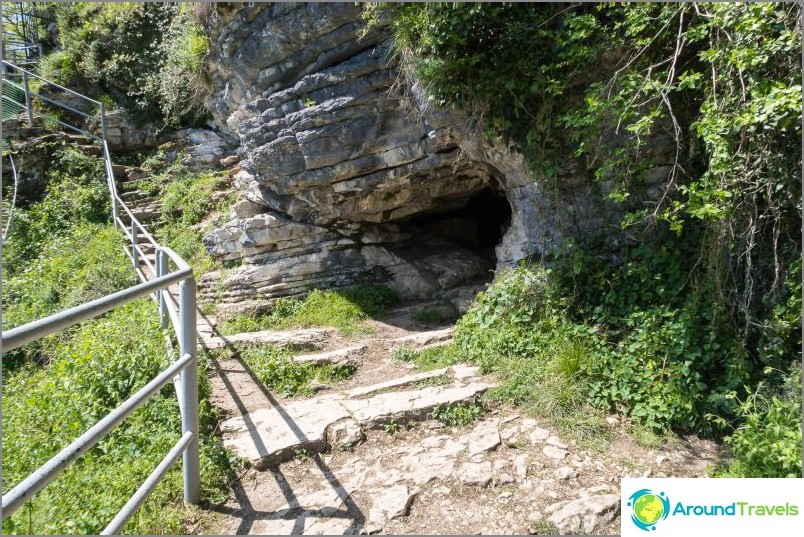 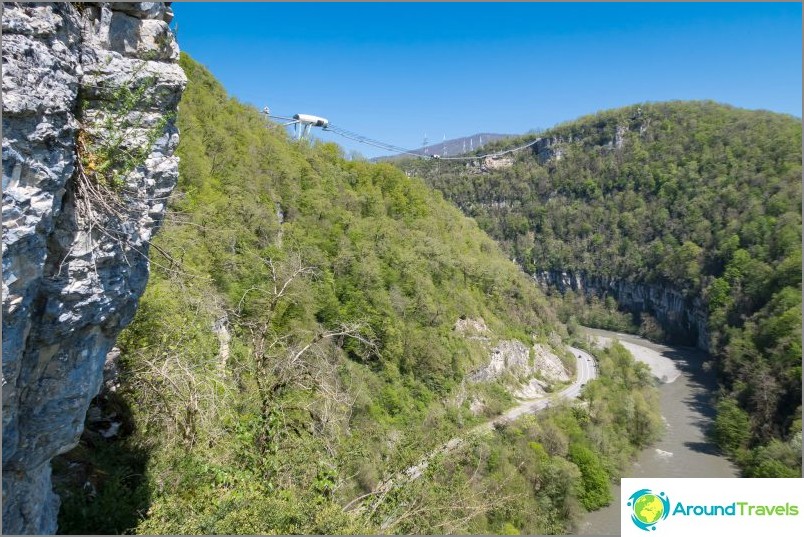 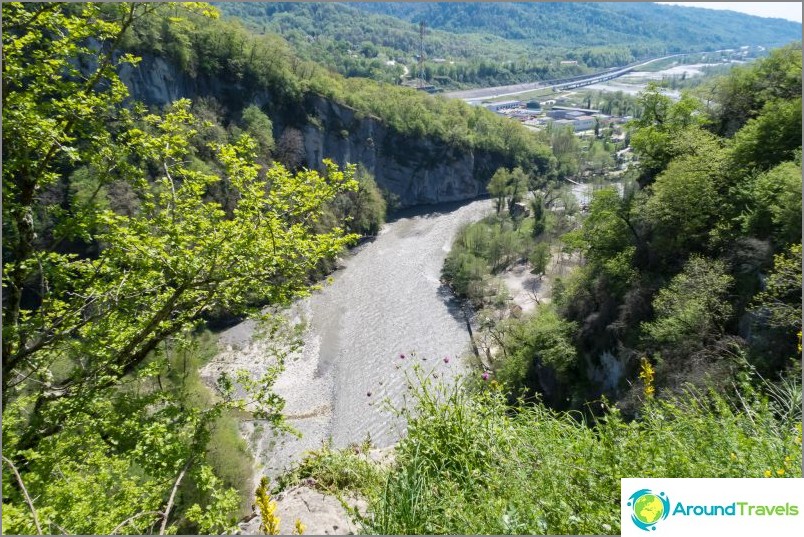 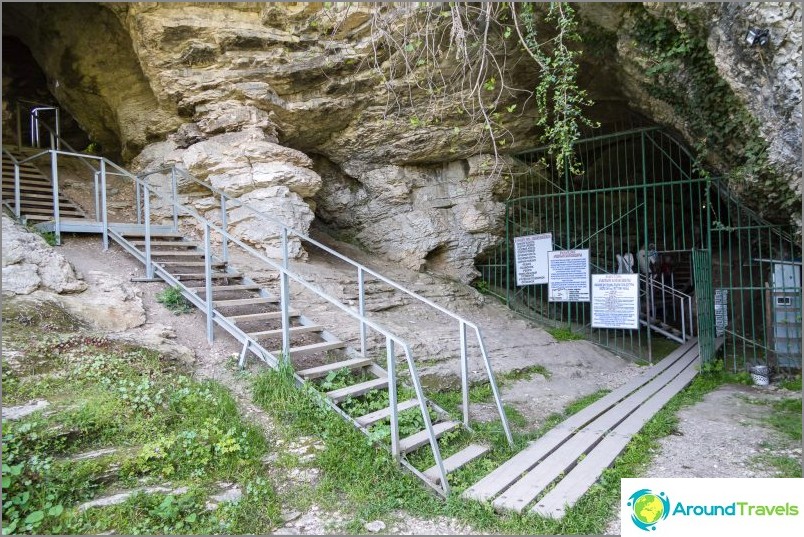 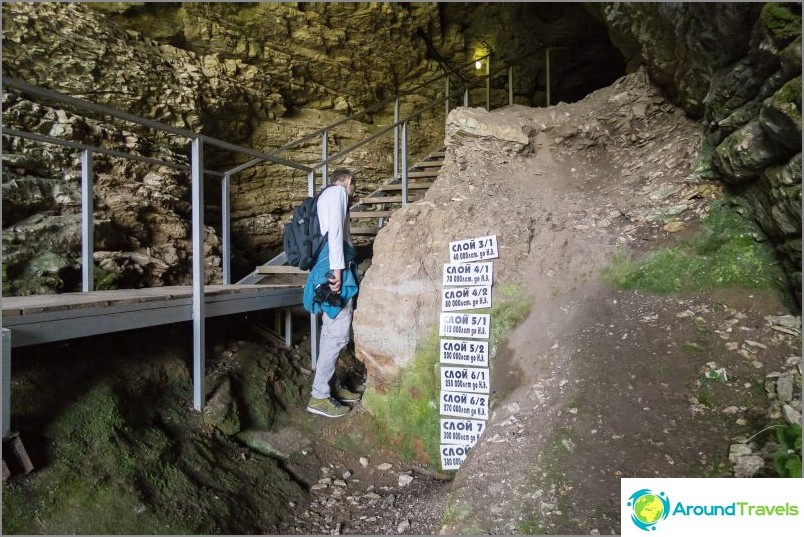 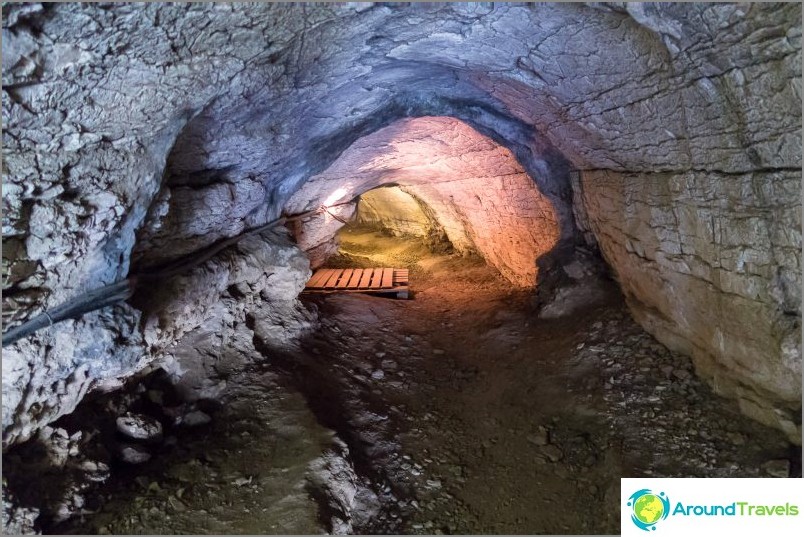 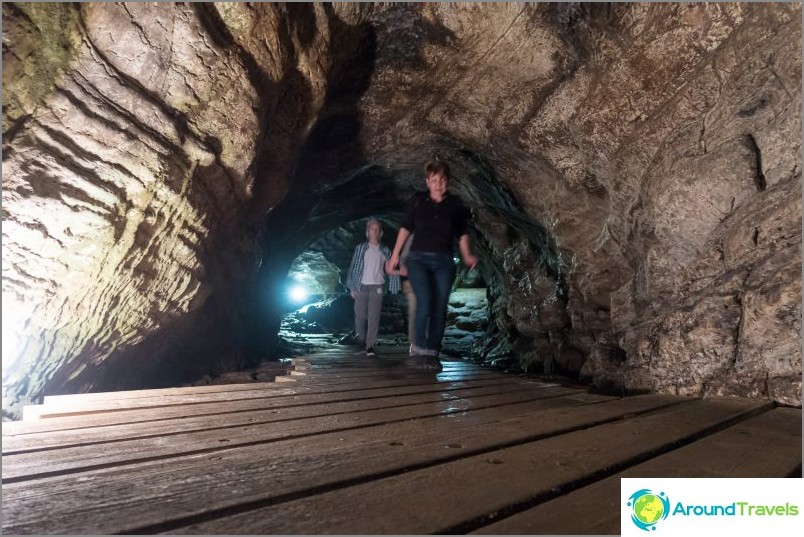 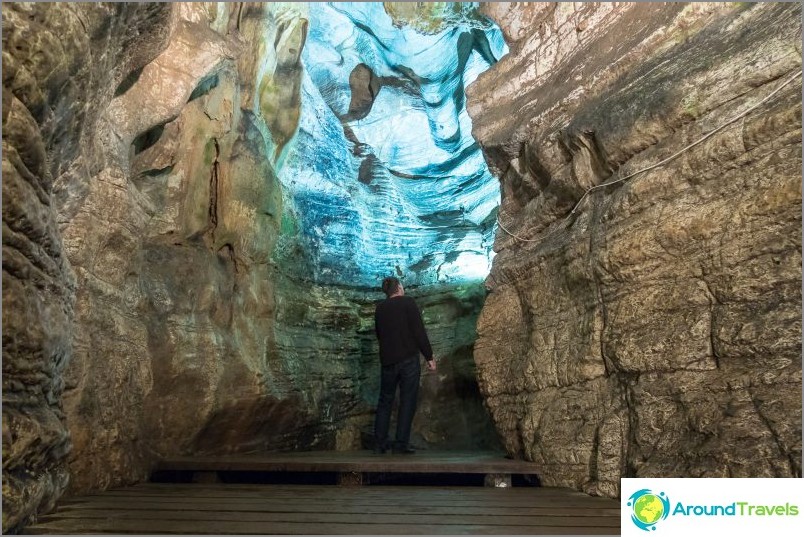 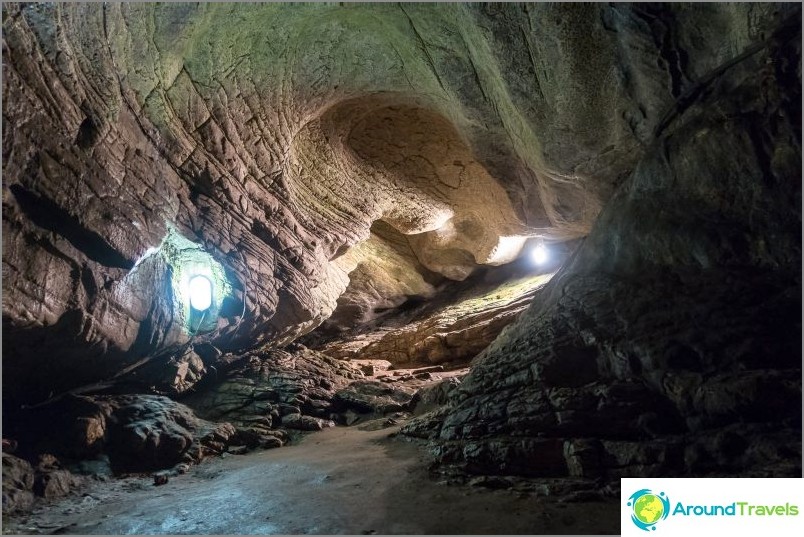 Icon of the Mother of God Akhtyrskaya

In addition to the cave, in the same location there is anothera landmark, though not natural, but of a religious nature - the icon of the Mother of God Akhtyrskaya. The icon itself will interest a few, but trekking to its cave will be interesting. It’s better not to carry children with you, because the path is steep enough and where you take a step, children will have to climb stones. The trail takes about ten minutes of your time and goes 500 meters down the slope. Immediately after descending the steps from the ticket office, on the left there will be a dangerous but beautiful viewpoint with exactly the same view as near the cave. After the viewpoint, there will be nothing but streamers on the trees and the final point of the route.

The last ten meters pass by stonesteps on the edge of a cliff, but the path is not dangerous - there is a railing. After the turn after the stairs you come across a small cave, or even a grotto, at the entrance to which stands a stand with an icon printed on glass. Candles, coins, plaques with a description of the shrine, in short - a standard set of this kind of attractions. Probably such a walk will go to religious people with a bang, then you will also walk and join the shrine, but as a simple trekking it is not enough. Do not have time to get tired and on the way is not as spectacular as we would like. Just wander between the trees and look for signs. 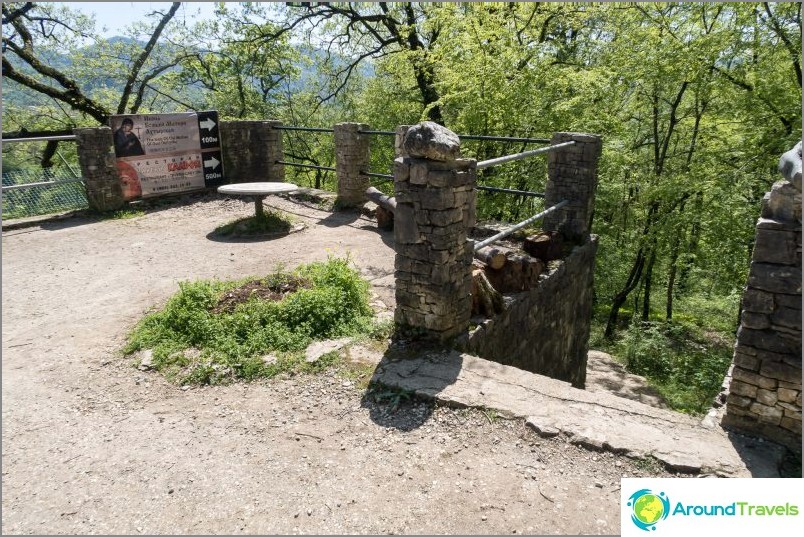 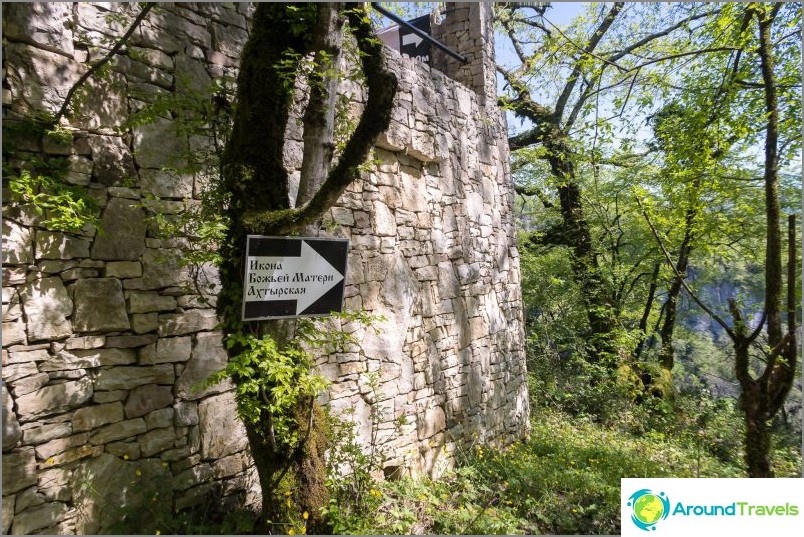 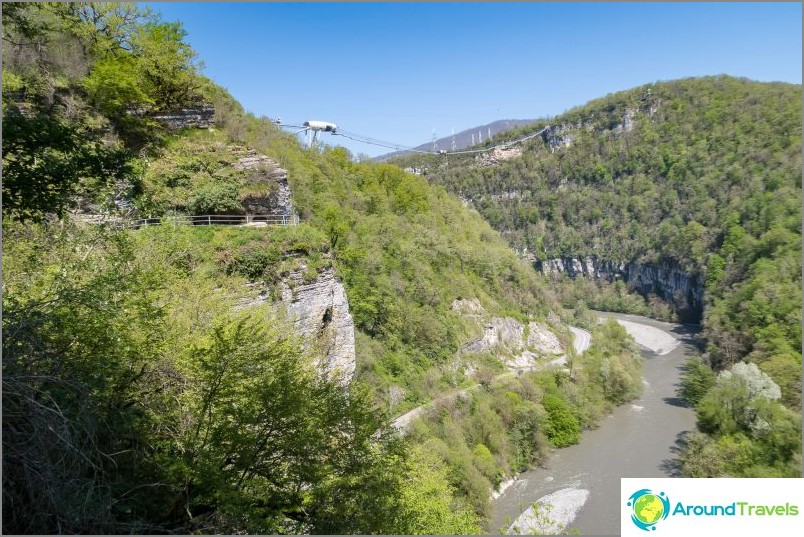 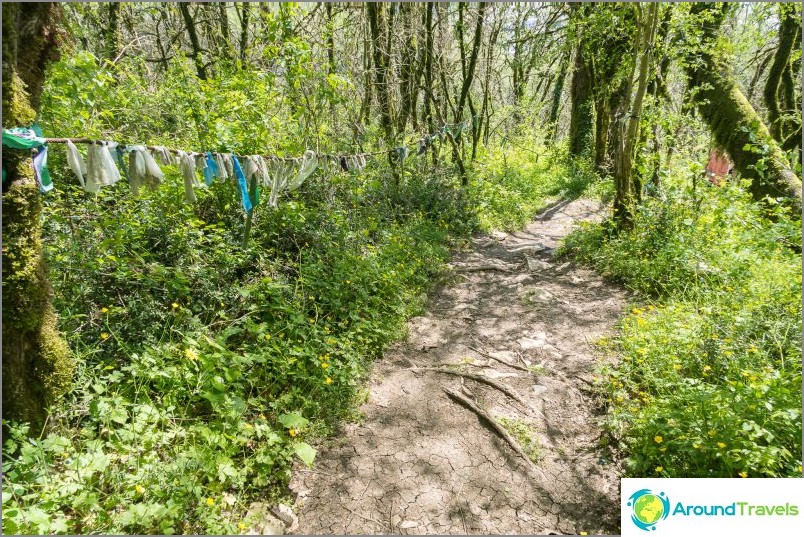 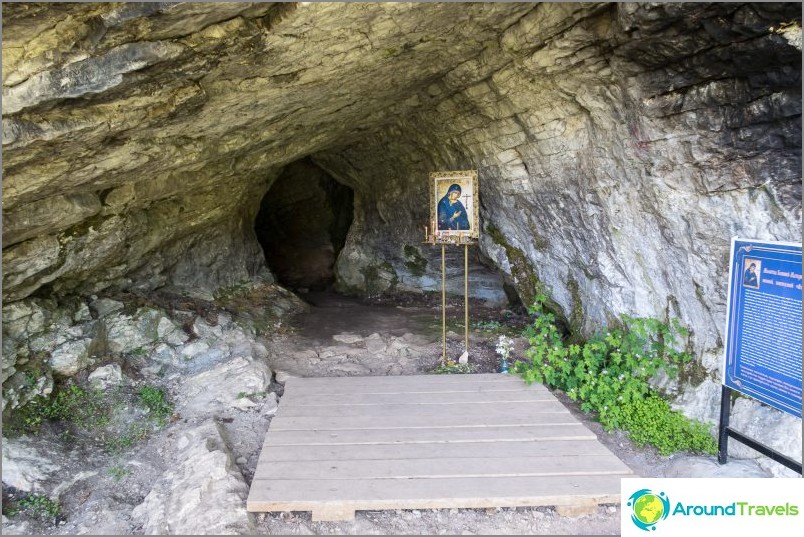 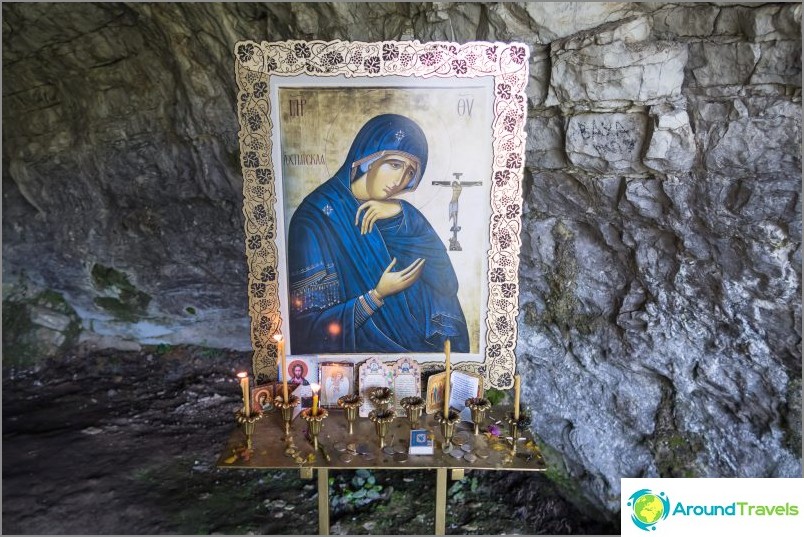 Icon of the Mother of God Ahtyrskaya

Suspension bridge in the Cossack Brod

According to reviews on the network, I found that the thirdThe landmark of this location is the suspension bridge across Mzymta. I really did not quite understand what kind of bridge: which is in Skypepark, or the one that hangs in the Cossack Brod, so I looked both. I have a separate article about Skypepark, but the bridge in Kazachiy Brod should be additionally mentioned - here the footpath to the mountain begins, to the Ahshtyr cave. Finding a bridge is easy if you find Trout Street. It's difficult to explain on the fingers, there is a tricky infrastructure in the village, but when you reach the end of the street, you will definitely end up at the bridge itself and the signs towards the cave. 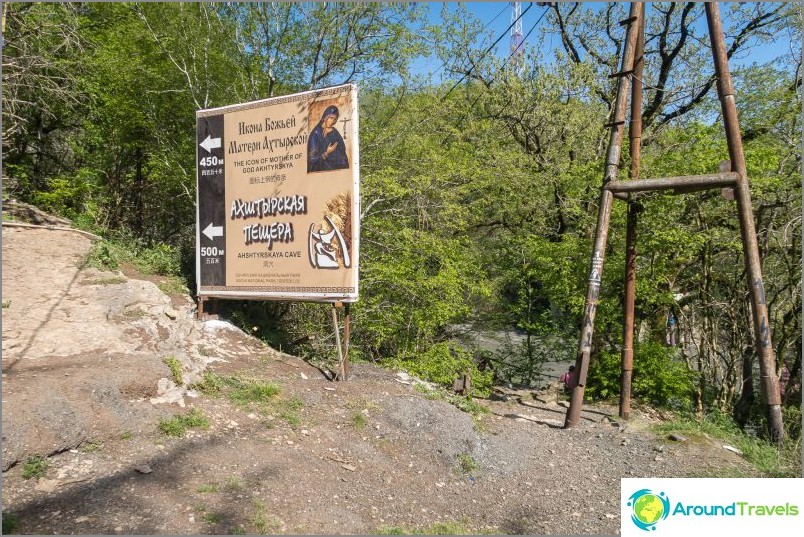 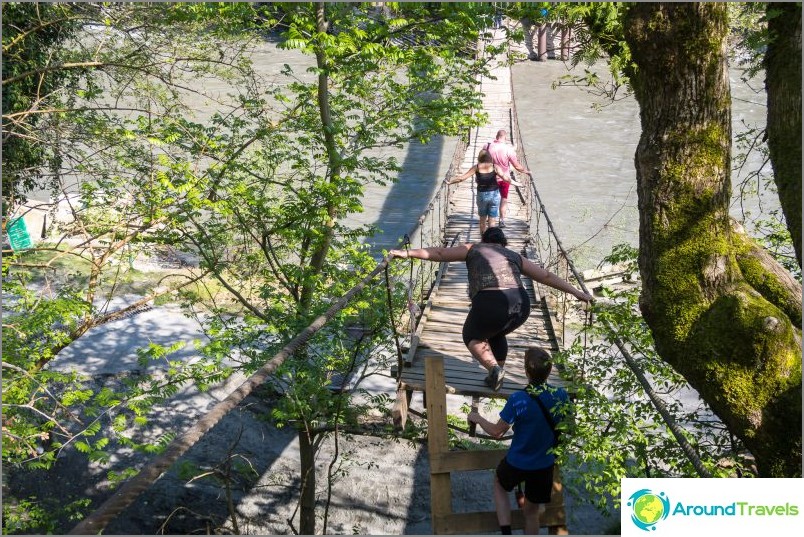 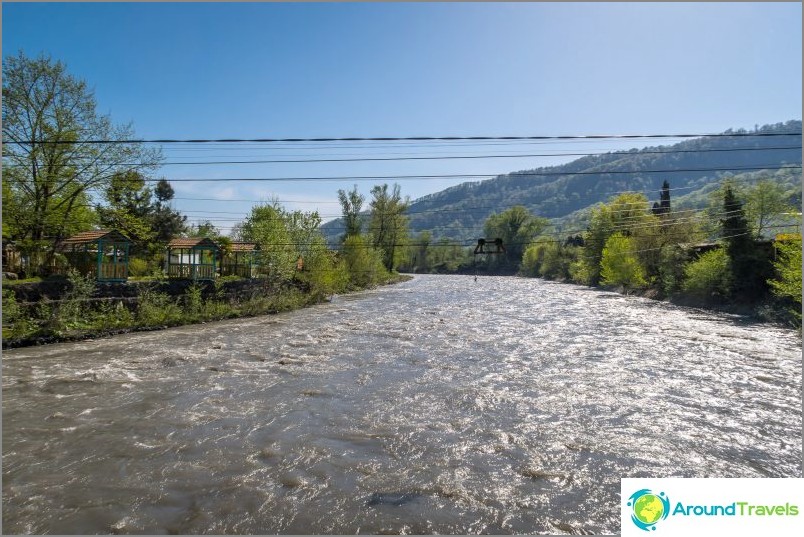 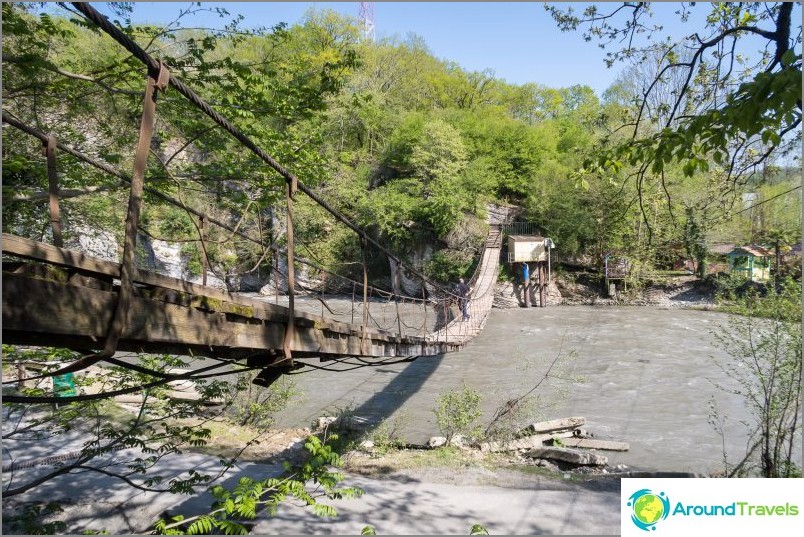 Entry fee - 200 r per person.
Opening hours - from 10 to 18 hours.
Parking is available, about 10 cars.
To visit the cave is better to take something warm, cold inside.

The place is quite interesting, does not take much time for inspection, if not to go to the icon. As an option, visit with a guide - otherwise a lot of information remains behind the scenes.

How to get to the cave

You will have to get there, either with a guided tour or by car. The car can be taken karsheringovuyu (and near the cave to put it in standby mode) or daily rent.

On the site of the cave can be reached in two ways. The first is on foot from the suspension bridge over Mzymta along the path that passes through the territory of the Ahshtyrsky canyon picnic complex. But then you have to decently go up the hill, which in the heat very few people like.

Therefore, it is better to use the second option andtake the motorway through the entire village of Kazachiy Brod, follow the signs for Skypark. The road will wind and constantly go up. I marked the exit on the dirt road to the Ahshtyr cave on the map at the end of the post, so that you could understand it more clearly. If you go fast enough, it is easy to slip. As a guideline, keep in mind the restaurant Sukhumsky Dvor - you can also park near it if the car has very low ground clearance. Across the street from the restaurant begins the descent along the rocky road to the parking lot next to the cave. In principle, the road is smooth and if you drive carefully, then any standard car will pass, not crowded to the eyeballs by passengers. On the lower parking there is a place for ten cars.

Ahshtyr canyon and its attractions