Theme Park in Imereti Bay, whicherected next to the Olympic facilities - one of the main and most visited attractions of the resort. The park is really huge and takes about twenty hectares with a lot of attractions. The largest have their own names and are the center of attention of the guests. Since the park is large, and in a day it will not be possible to discourage an expensive ticket for the full program, then basically everyone starts having fun with the big rides.

Quantum Leap (slide), Firebird (towerfree fall), Serpent Gorynych - (roller coaster) and Sharolet (family slide). Plus a couple of dozen smaller rides. Plus the Dolphinarium, the maze, the Jungle activity complex, the stage for performances, the contact zoo, the circus - in short: on the territory of Sochi Park you will have non-stop shows and performances, entertainment and activity. And all this is included in the price of a single ticket that is issued for one day.

What else to see in Sochi>

Entertainment programs for childrenfor adults - cafes and snack bars. Smaller children are usually taken to rides for children, while all the extreme pleasures of Sochi Park are open to adults. Before you get to the attraction, you will be instructed by security requirements.

Ticket price for an amateur. If you purposefully come to have fun all day and try all the rides, then this is normal and even advantageous. But if you don’t see the slides or towers, and you visit Sochi Park exclusively for a child’s walk or you want to visit just a couple of attractions, then the toad is choking and crying, considering that the attendant is paying the full ticket. Nobody prevented the organizers from making two price categories and two types of bracelet: the participant and the attendant, as well as, for example, a 1.5-2 hour ticket. But this is so boring. 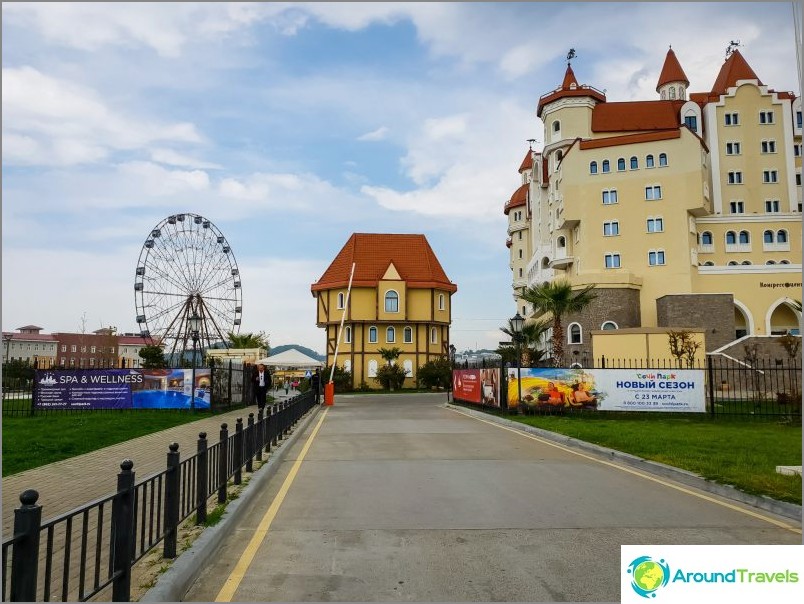 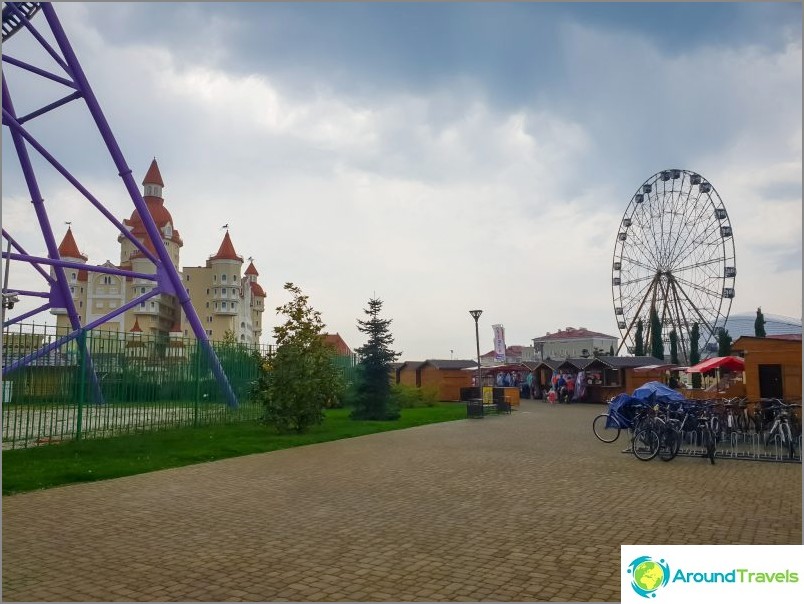 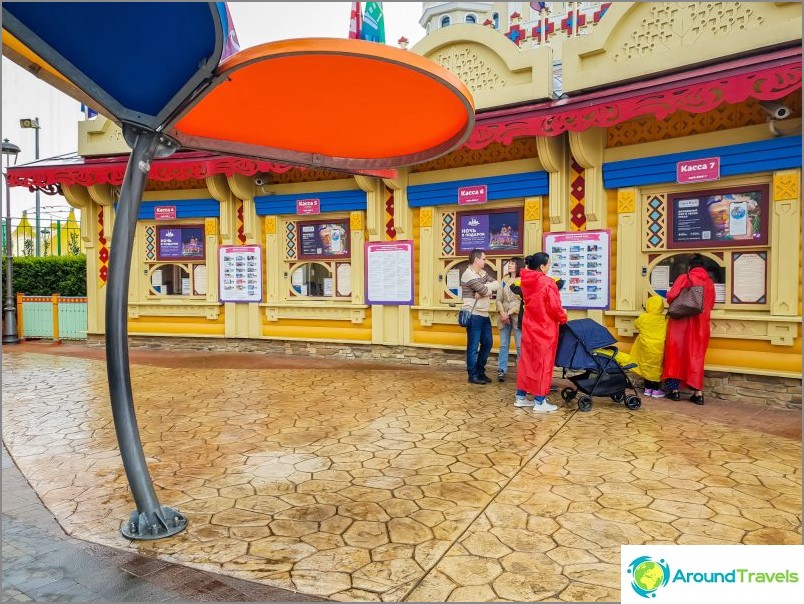 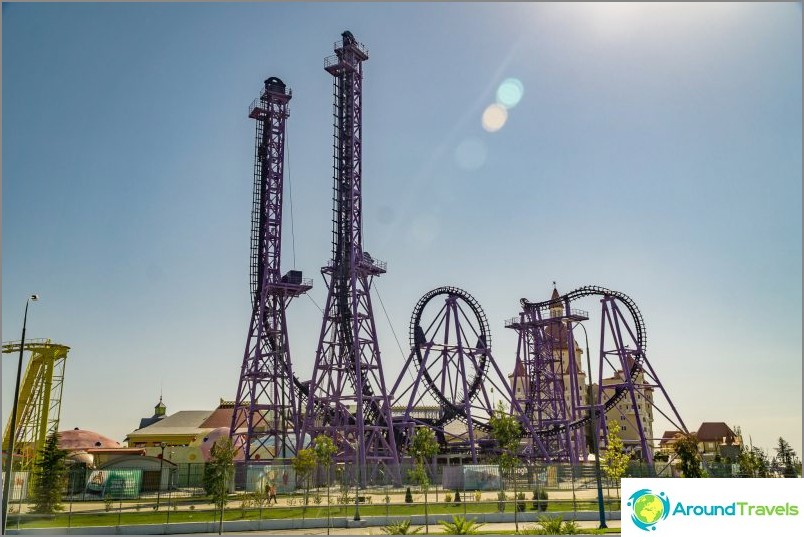 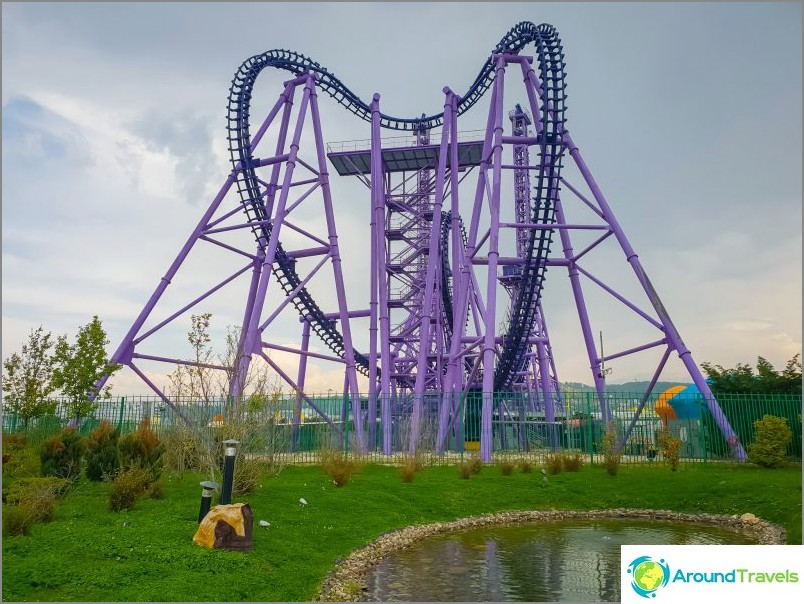 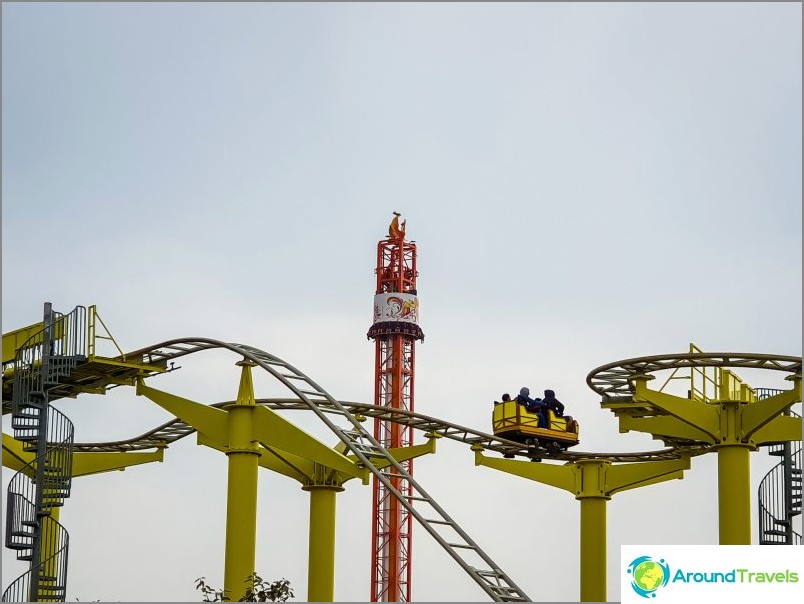 The territory of Sochi Park is so big that ityou can even complain. I understand that here, most likely, the organizers hapnuli hectares with an eye to the future, but in the present you need to move from entertainment to entertainment for a long time, which bothers very quickly. Here you can add kilometer queues of 30-40 minutes, which need to be defended again in the heat.

If you come here with children, then the distancesbetween the rides are already becoming a problem for you, and you are unlikely to have time to run around everything in a day, so come to terms with it and have fun: the territory of Sochi Park is really nice enough. There are several original cafes that will be remembered for quality and serving dishes.

The price includes unlimited visits to all.rides unlimited number of times. And if you, for whatever reason, come out of Sochi Park, then during the day you can safely return here by presenting a bracelet. But note that on some days some of the rides may be closed due to rain or for repairs (I hit it once) and the meaning of the visit is completely lost. Then I wanted to definitely get to the Quantum Leap hills, and they were closed. The price of a ticket, by the way, was the same.

Children run on growth. If below 90 cm, then the child will not be allowed anywhere, and up to 107 cm it is allowed to go only to the rides of the children's corner. Well, according to my observations, it is better to bring children who have grown up over 130 cm - then it will be possible to carry them out to most of the rides.

Opening hours from 11 to 21. In the off-season, working from 11 to 18-19 hours. Also there are weekends Monday tuesday. All this information is on the official site.

The show with dolphins lasts about half an hour. The queue for the passage to the Dolphinarium is about the same, so it is better to take it in advance. If you buy a ticket with the additional option "photo with dolphins", then there is a chance to get inside to bypass the queue. But this experience is not mine, so - not one hundred percent guarantee.

On the territory of the amusement park there is a hotel Sochi Park Bogatyr in the form of a huge castle. To live there is noisy and expensive. Although someone like, of course. 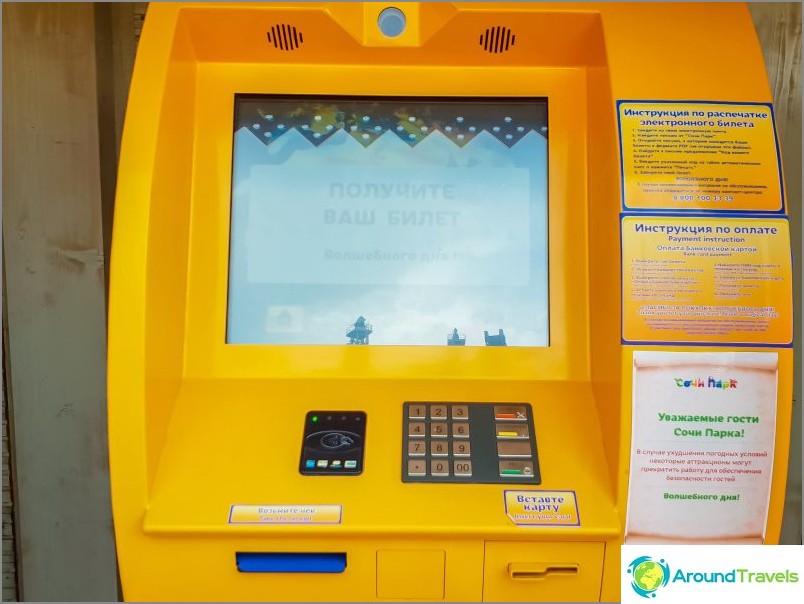 Tickets can be purchased on site in the machine 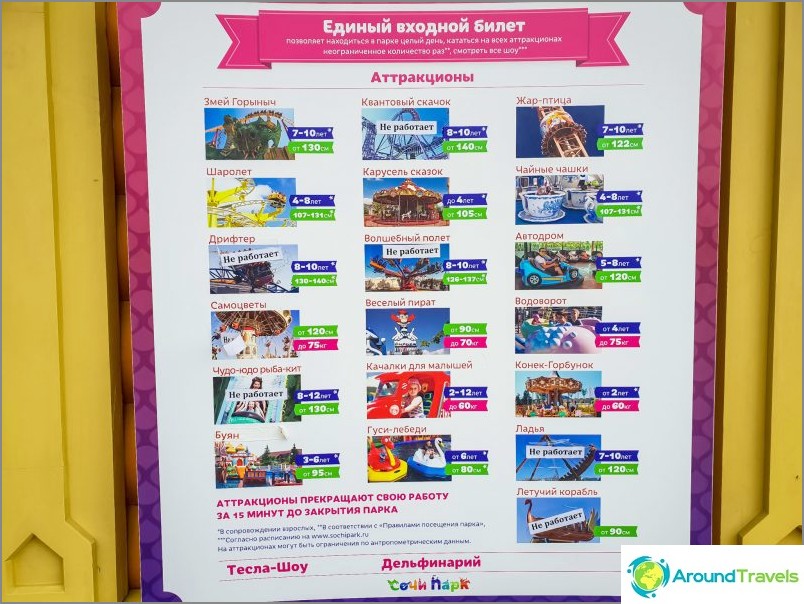 An example of how the main attractions do not work, and the price is the same 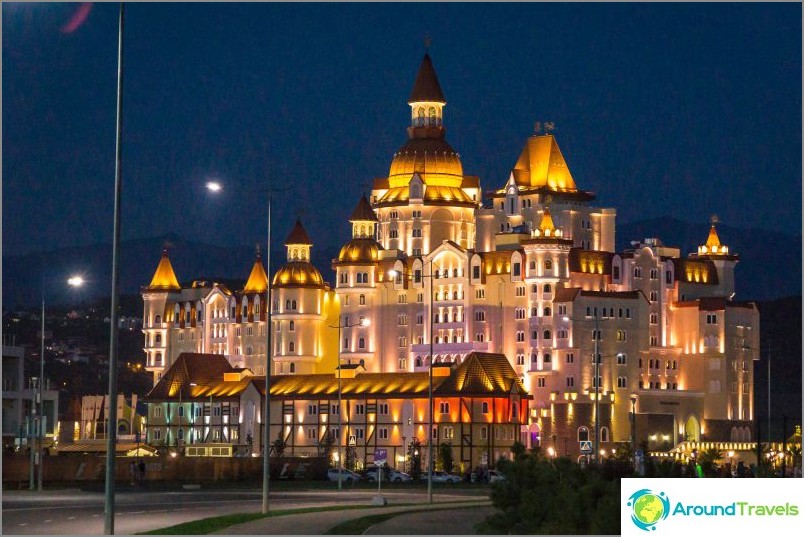 In the summer season it is better to come in the morning, while the majority of guests are still sleeping in homes and hotels. Then hell begins and kilometer queues everywhere.

Before especially mobile attractions it is better to lay out all of the pockets. For this, storage cells are installed everywhere, as in supermarkets.

Food and drinks in the park are worth someirresponsible money, like at the airport, and at the entrance you can take away their products "in order to avoid food poisoning." Bring with you and hide at the bottom of the bag.

If they miscalculated with water and did not buy in advance, then(alternatively, no less extreme than a roller coaster) you can use the water in a public toilet. Here, some visitors were pressed down pretty much in due time, so there is information in the network that you can drink water without fear. But this is not advice, I would rather buy water.

Swimsuits and plaques you can come in handy when you arrive at Sochi Park in the thick of it - water rides rule! 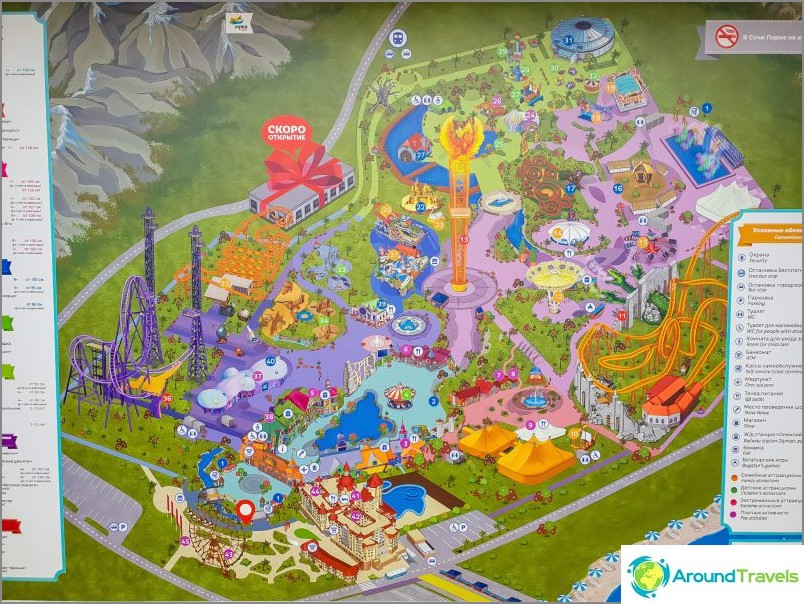 Attractions Sochi Park
Sochi Park is an amusement park right next to the Olympic Park. The largest in the south of Russia.
Read more.

Sochi Park is an amusement park right next to the Olympic Park. The largest in the south of Russia. More details.

Does Greencard need a car for ...

Arboretum in Sochi and the cable car - ...