Home>New articles>Antiobushin - raise the penalty for driving on the side of the road?

Antiobushin - raise the penalty for driving on the side of the road?

Upon arrival in Russia wrote about positiveand now I dilute it a bit with negative. Well, this is in addition to the fact that the doctors are merging us again ...

I really don't want to pay attention to this, butIt is, striking. This is me to the fact that nothing specifically need to seek out. I went to Auchan, I took Egor to the doctor, and the harmony with balance disappears somewhere, you want to overlook, but you can't. It's about driving on the sidelines.

Where does this aggression come from?

In Moscow, a very aggressive driving style, horror,how unusual after a relaxed Thailand. There, too, is not sugar, but at least not stupid from evil. And we fly, cut each other, nervous, honking at the slightest alien misstep or delay. I didn’t start with a traffic light for a second, already beeping, blinking headlights and almost trying to change lanes trying to drive around. Worse, probably, only in Rostov-on-Don, from those cities where I was, they go there without any rules (no one will be offended by Rostovites, but it was very hard to ride around the city).

God, what is a person's life, if he isvalues ​​these seconds. And I am very sorry for these fast, half of them then lies in the cuvette. Moreover, perhaps in fact there are not as many as it seems. It's like trash, you come into the forest, and if there is only 1 litter for 100 people, the forest is still dirty, and you think that everyone is like that.

You can’t ride along the roadside.

Now about the curb. I don’t know, maybe it only hurts me, but I’m really sick, some swear words come to my head when I see it. I tried to stand on the side of the road to stop the flow, but it helps weakly, or rather it does not help. Though direct movement Antiobochina organize 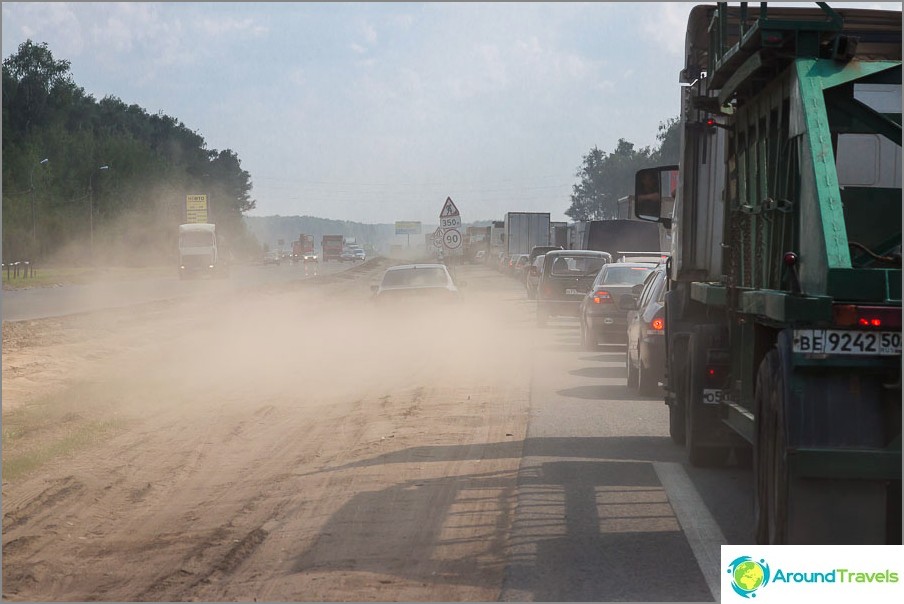 You have to breathe all this rubbish and wash the car.

Three reasons why this is wrong:

I wish everyone who loves to ride along the roadside, kindly, sincerely:

As it turned out, the thoughts of different people converge. While I was writing this article (back in May it was, in contrast, after the arrival), in June 2014 a site and a Vkontakte group appeared dedicated specifically to this topic. I am glad that there are drivers who also do not like it, to the extent that they have even drawn stickers and laid out a useful article on how to complain to the traffic police.

True, I don't have a DVR, but forsuch goals can be purchased. Although always in such cases, I have a question why ordinary citizens should deal with such nonsense, write complaints, register violations, go to the thresholds of instances. True, all the cases are full of their own, the money must be earned, children should be raised to their feet, and so on. Sadness

P.S. If you do not agree, your right. But in my opinion, in order to be like Europe, it is necessary to stop violating, as in Europe.

Cambodia instead of Thailand? Exploration for future wintering