Beach Ao Tong Nai Pan Noi - a neighbor of the same handsome Ao Tong Nai Pan Yai on the northwestern shore of Phangan. Small, beautiful beach, with deep sea and far from the main tourist trails. Nai Pan Noi instantly sinks into the soul and leaves no chance of a negative - you will love it.

He has light, but quite decenttourist infrastructure, it is located at the end of a new, cool route that runs through the mountainous middle of the island. There are plenty of options for accommodation and everything you need is at hand, though - on a miniature scale. And also, from here the cheapest boats go to the introverts' paradise - Bottle Beach (200 baht per person).

Ao Tong Nai Pan Noi beach stretches for 600 metersalong the shore of the bay bounded at the edges by steep cliffs and heaps of boulders. To get to Nai Pan Noi along the sea from another beach is not possible, only from the coast, only along a rather difficult road.

Therefore, the beach should be considered, or, as a permanent place to live and rest, or for a one-time swimming. Every day it will be difficult and dangerous to drive here.

And on the right, at the top of Cape Klang, which shares twin beaches, was built Panviman Resort

. The rocks on which Panviman stands are separated from the rest of the beach by a small river that does not dry up even in the heat season.

The beach itself is quite wide, at an average tide of about 15 meters, and with an ebb reaches 30–40 meters of clean, coarse and loose sand with a yellowish tinge.

The slope of the coast on Tong Nai Pan Noe is quite acool but not extreme. In general, after all these shallow, flat-bottomed beaches, which are continuous along the western coast, I would like to run around Pan Noe and shout: "Here it is, here it is, the fish of my dreams!"

In view of the fact that the beach is quite small,and the coast is divided between a dozen resorts that lick him in the morning, Ban Nye can be called a classic beach holiday. Clean shore, uniform width across the beach, the entrance to the water without stones and irregularities, the depth of the shoulders ten meters from the shore - what more could you wish for yourself on vacation?

To complete the sensations need a chaise in the shade. Sun loungers on Ao Nai Pan Noe is. Lot. Everywhere. True, they belong to resorts, but the order of a cocktail in exchange for the privilege of lying like a white man, has not been canceled. The shade on the beach is mainly from the trees, there are a lot of them, they are everywhere.

Plus, Nai Pan Noi is located on the eastcoast, which means a relatively hot start to the day will be compensated by an increase in the shadow of the afternoon. This is very important if you remember that at low tide the water leaves, which means that the shadow always remains close to the sea. 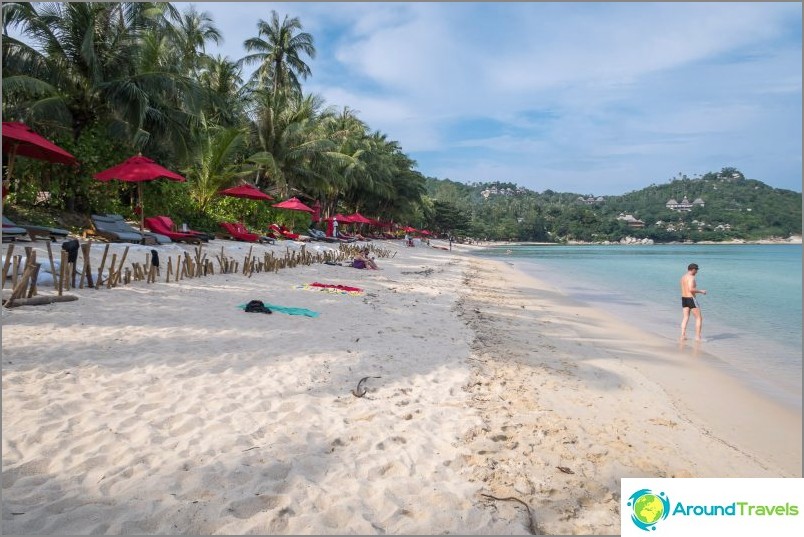 On the left, the beach also rests on a cape. Behind, on the sand - an improvised fence of a nearby resort. 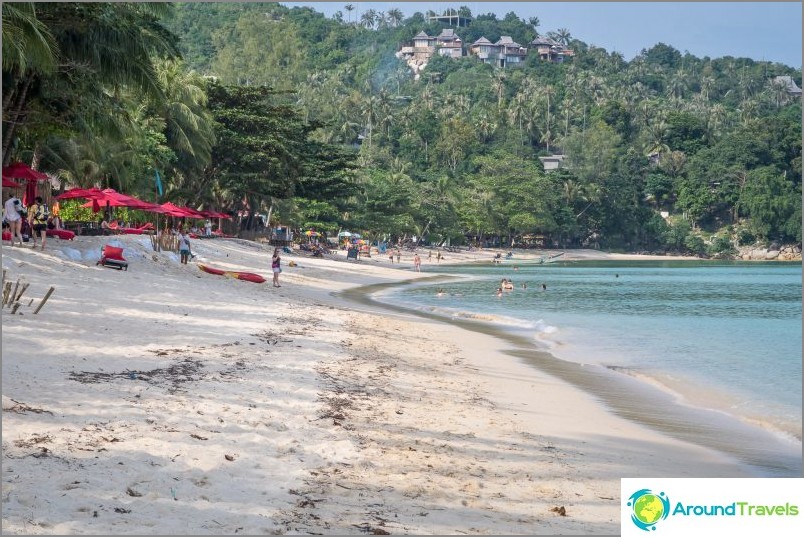 In the hot season, the coast is much cleaner and smoother, now from under the sand you can see protruding bags, which strengthen the coast from blurring 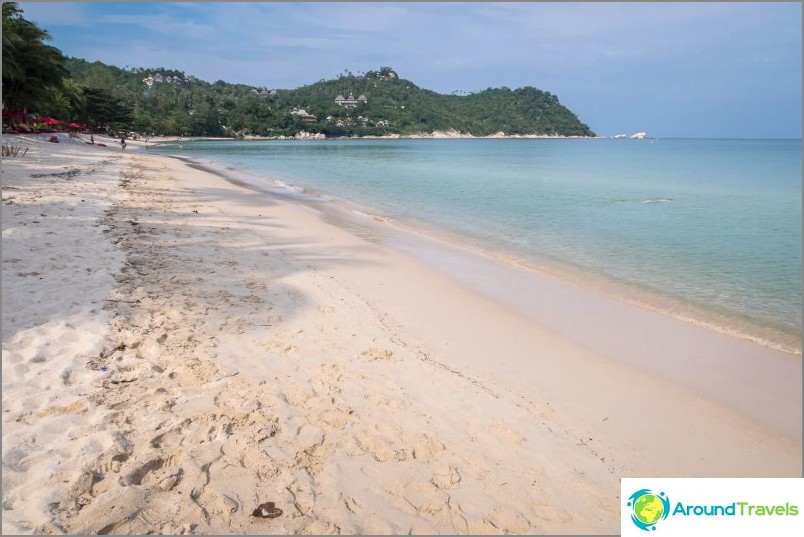 If you look at the sea - the view is perfect, the sand highlights the water. 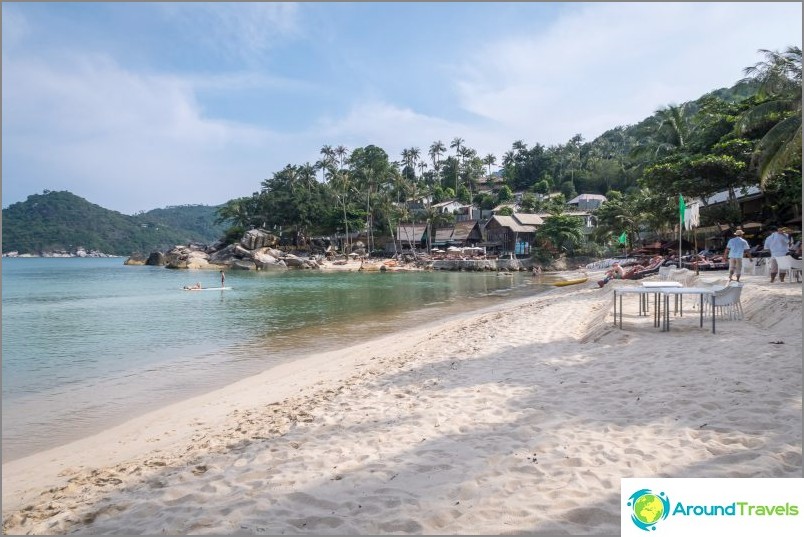 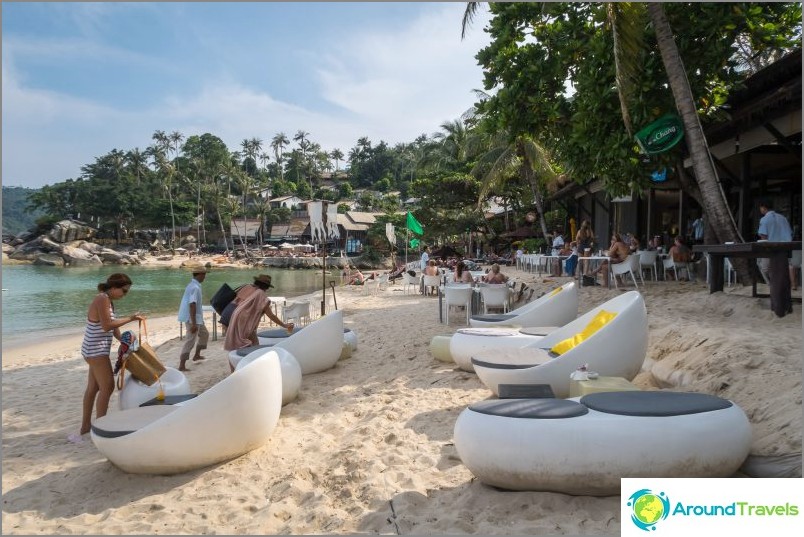 Each resort has its own lounge chairs. The beach is a little washed up by the waves, but I was here during the rainy season, so this is normal. 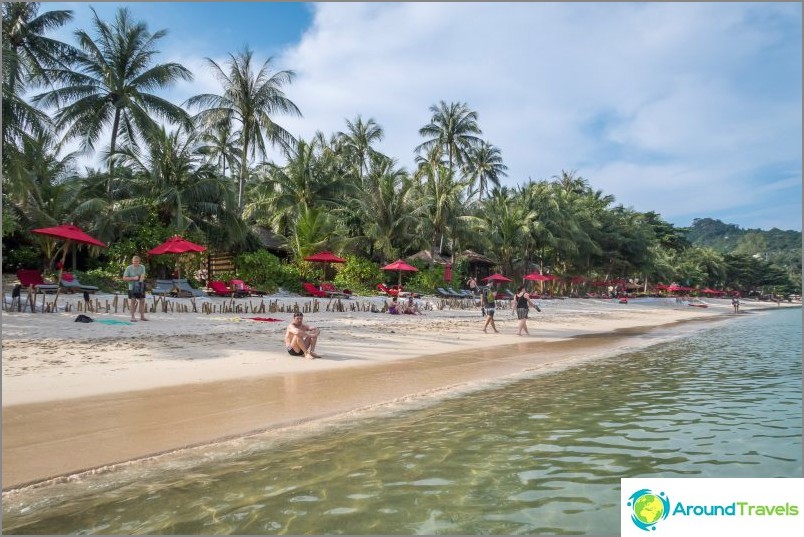 Under the water, I feel with my feet a small drop, washed up by the waves, but the bottom is clean. Soft 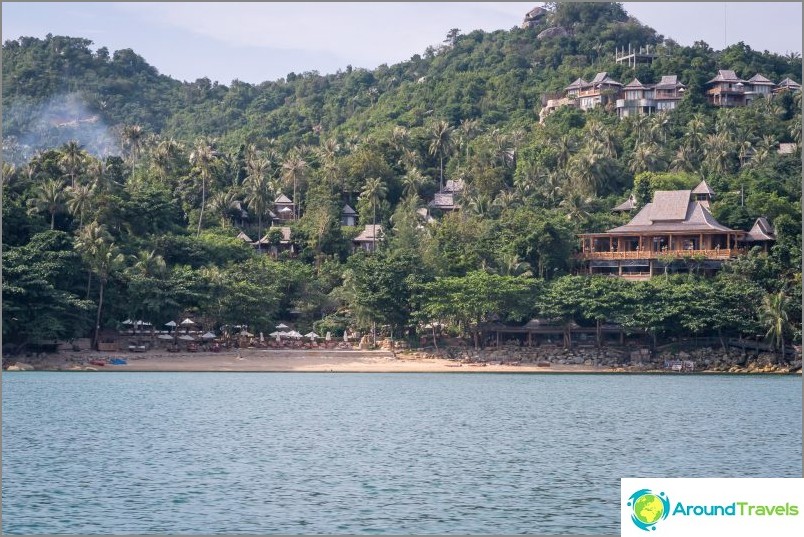 On the left side of the beach, behind the cape, another little beach is hidden, 100 meters long.

Infrastructure of a small beach for tourists. Roughly speaking, all amenities are located within 200 meters from the sea, behind the first line that the resorts occupy.

In addition to two convenience stores, on the streets of Tong NaiBan Noah has tourist and rental offices, laundries, cafes, bars, restaurants and massage parlors. There are also several ATMs from different banks, there are even city telephony devices. In fact - everything you might need in two weeks of rest.

Along the coast along Ao Nai Pan Noah, one can count about a dozen hotels, resorts and guesthouses.

The most precious of them, besides those already mentioned, are:

located on a hill and on the rocks, which on the one hand creates inconvenience when walking on the beach.

But on the other - only there from the windows opensmagnificent view of the bay and the horizon in the east. By the way, all the hotels of the first line on Nai Pan Noe have a high rating on the reviews of holidaymakers, and when thousands of people massively put likes and excitedly praise the location and the hotel - that’s something, he says.

Personally, I really liked Panviman visually,despite the river nearby. At first I walked around its territory, and then I read some reviews and looked at the bookings. Maybe in the next I will go to it. There is so close, that do not care for the river.

And here you need a taxi driver or navigator. From Tong Sala, you will have to drive to the right, along the southern coast, to the exit to the new route, which you can find with your eyes, according to signs, but you can easily get lost in the Pangan twists and turns. On the map, I noted the desired exit, then you have to go on a new and good highway.

However, it is worth knowing that the track is full of turns and swings, so careless driving is fraught with falls - the guys in my turn have decomposed because of the sand in the turn.

Will have to go long, past the statue of deer, pastroundabouts and steles with balls, before turning on the concrete to Tong Nai Pan Noi (also on the map). Drive to the Panviman hotel barrier, then to the left and to the end. At the end there will be a large parking lot in the shade of the trees. 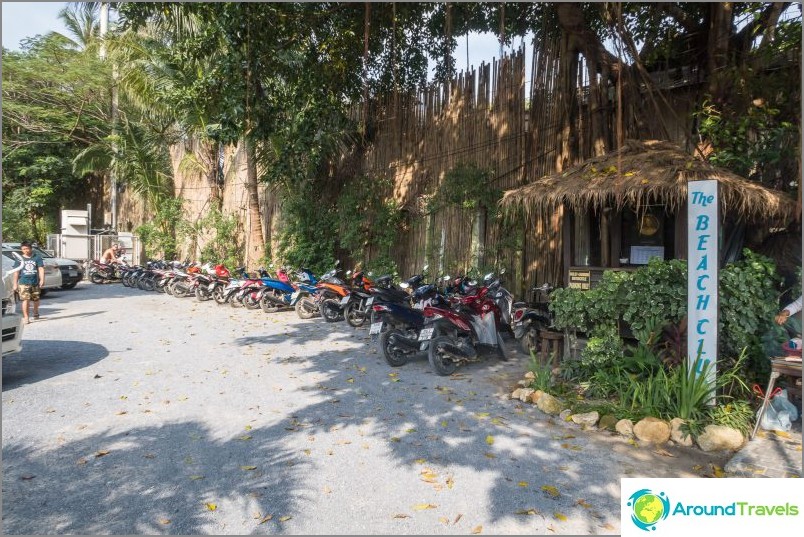 Parking at the end of the road, passage to the sea to the right of this fence 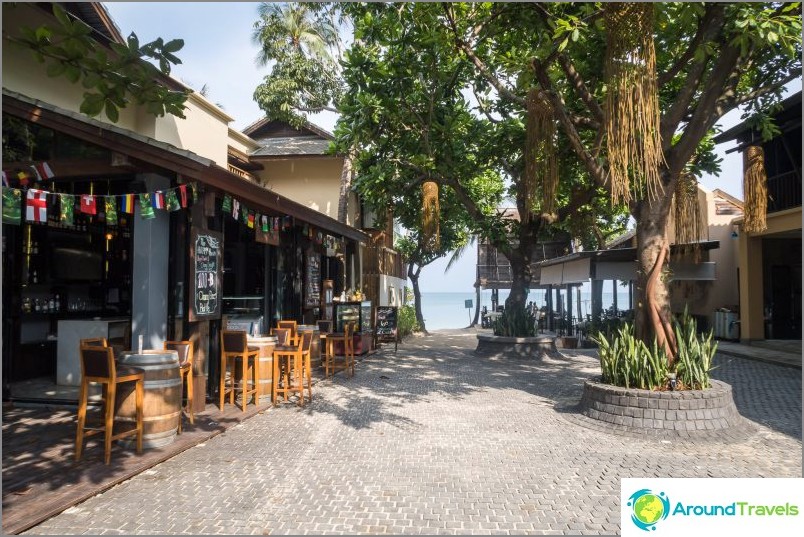 Ao Tong Nai Pan Noah ahead shines through. The most convenient access to the sea in this place.