Home>New articles>Arboretum in Sochi and the cable car - photos, opening hours, how to get there

Arboretum in Sochi and the cable car - photos, opening hours, how to get there

Arboretum - one of the mainattractions of Sochi and its business card. It grows about 2000 exotic and rare plants brought from different parts of the world, collected a unique collection of subtropical flora and fauna. In addition to a variety of vegetation, in the territory of the arboretum you can see rare animals and birds.

The first time I came to this arboretum even years10 back, but then it seemed to me too crowded and somehow faded, faded. It is not surprising, the peak of the season was August, the heat was terrible. And he made a completely different impression in October, at my last a trip to Sochi.

Unfortunately, I did not calculate the time and came fora couple of hours before dark. Still, if there is a desire to get around, as much as possible, or just take a walk, then it makes sense to lay 3 hours, after all, the arboretum is big. So I ran straight from the ticket office to the cableway (the ticket desk at the entrance to the park, and the cable car stop is 5 minutes away), trying to catch the last departure of the trailer. By the way, the option of visiting the arboretum, starting with the cable car, is very convenient, since the park is located on a mountainside. Up you climb the cableway, admiring the views of Sochi from the observation deck, and then with the legs you descend through the arboretum to the starting point. In general, I recommend to do just that. 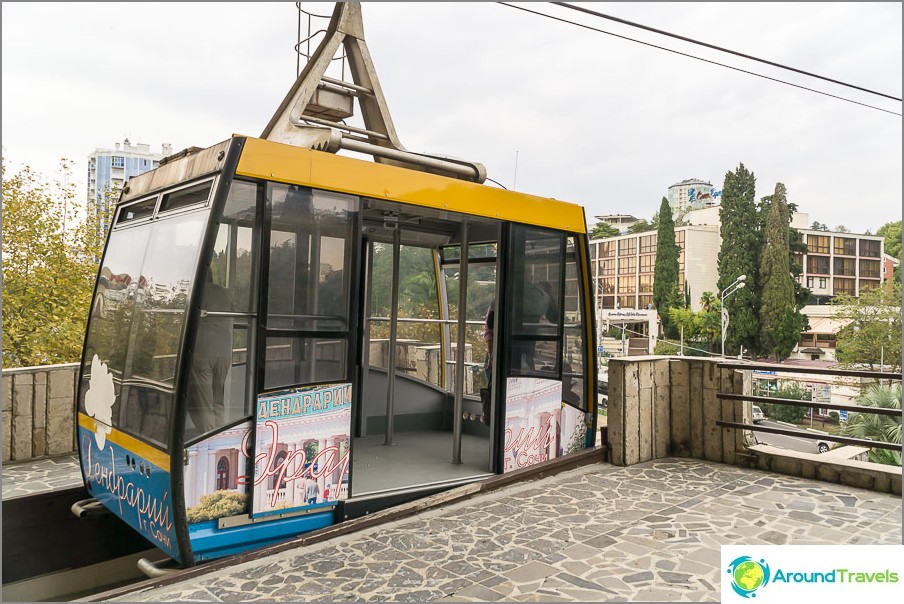 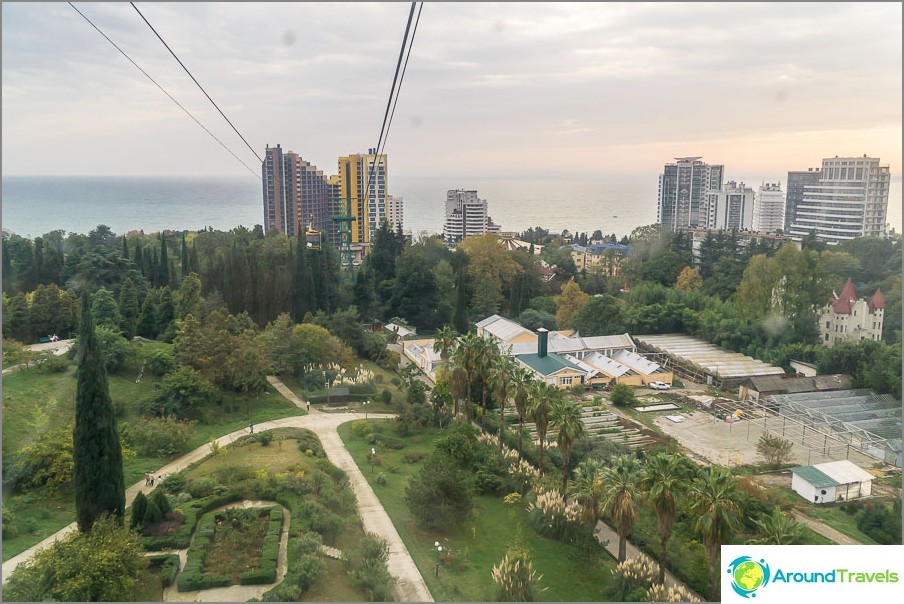 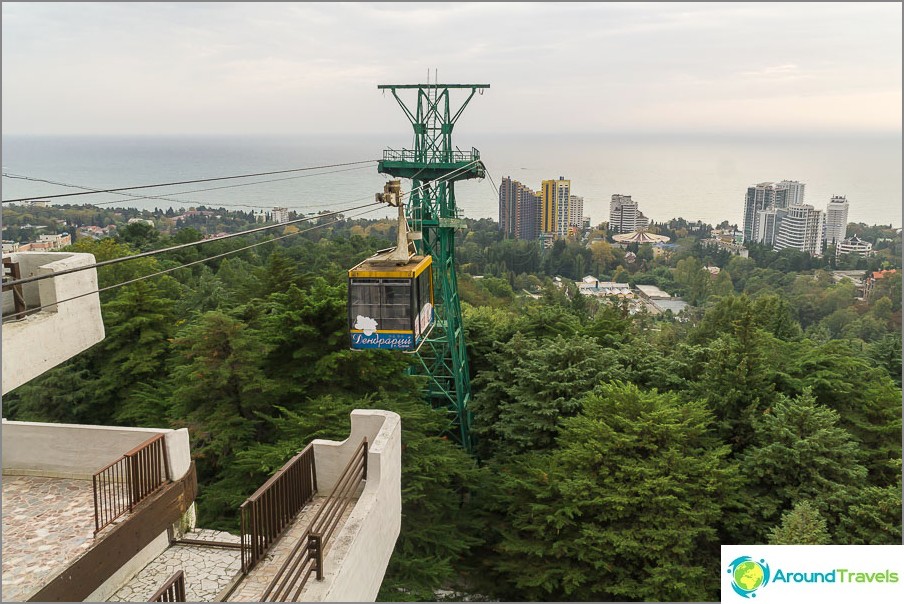 The cable car does not bring to the viewing platform itself, butseveral floors below. Considering that there are no pointers, and almost everyone, coming out of the trailer, they rushed straight down, it seems not everyone knows that you can climb up a couple of floors, from where you can enjoy views of Sochi and, in fact, the arboretum itself. 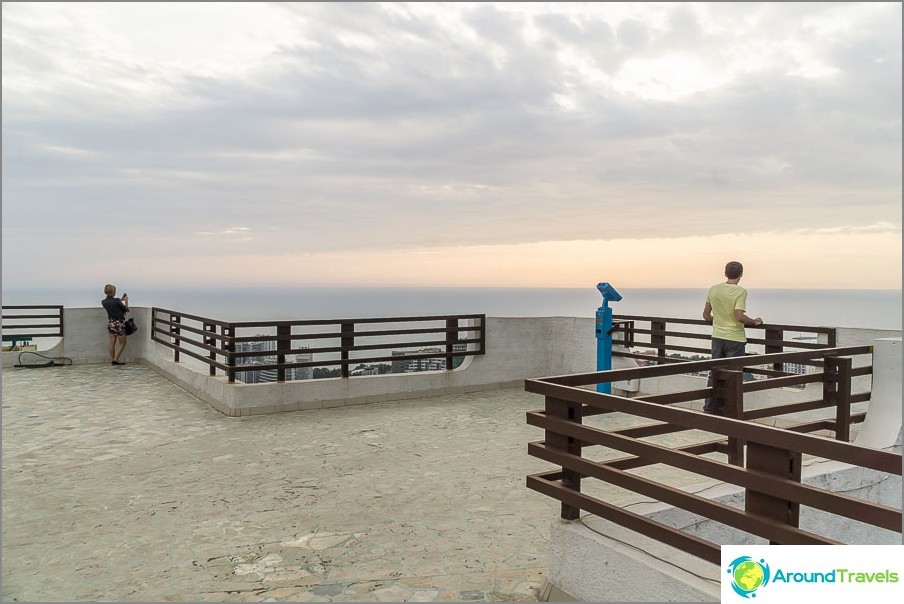 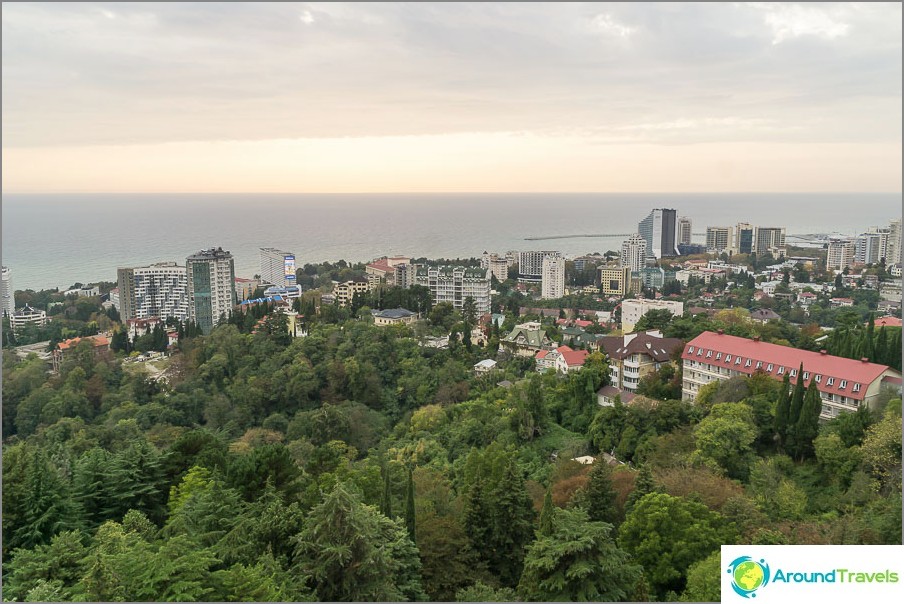 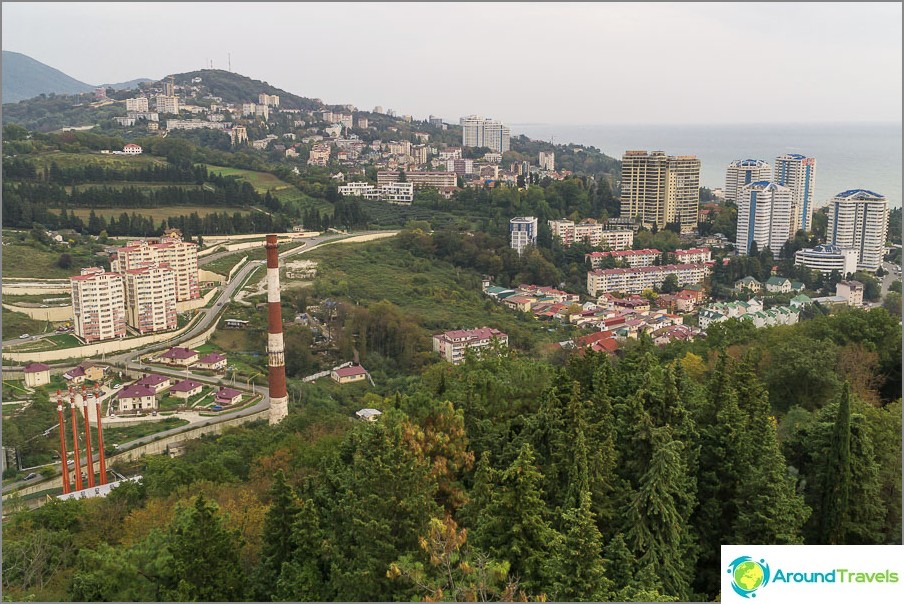 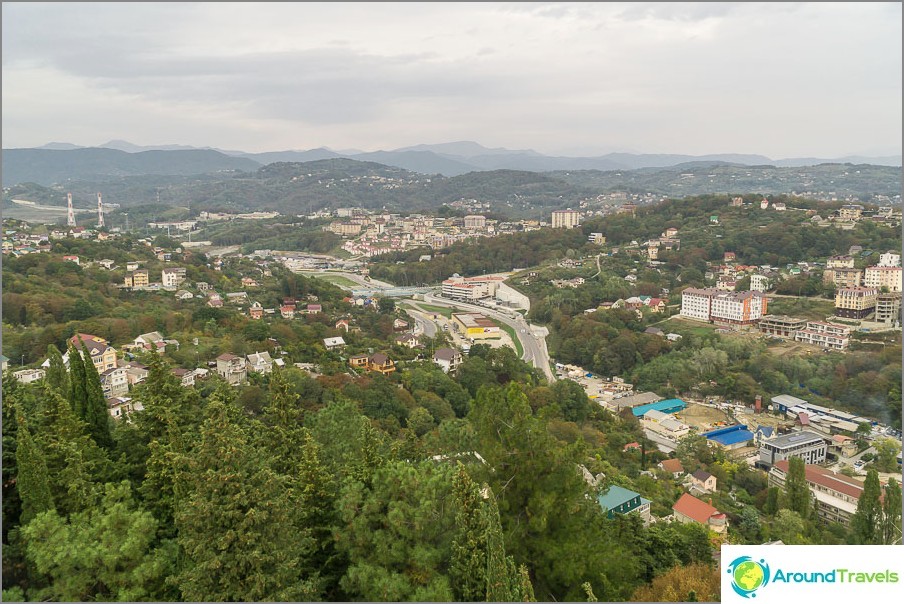 Impressions of the arboretum in Sochi

As you already understood, I liked it. In general, I like similar corners of nature in cities - public gardens, forest parks, arboretums. Especially when it’s not just a park, but it’s just so refined, with ladders, strange plants, fountains, and so on. Of course, sometimes you want to go for a walk in the forest to get away from civilization, but the Sochi Arboretum represents a kind of balance, you forget about the city, especially if you are bored in the back of the park. 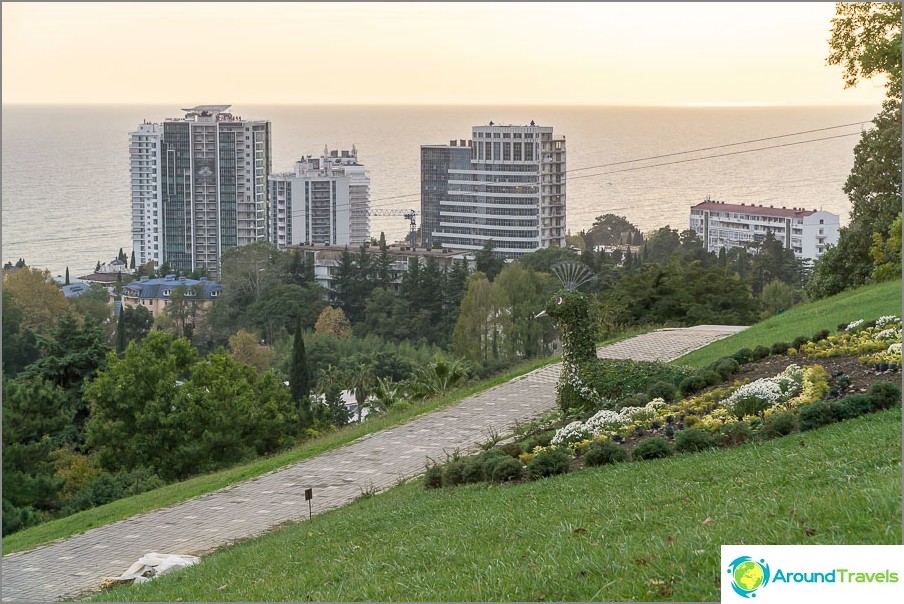 Sochi Arboretum, at the top 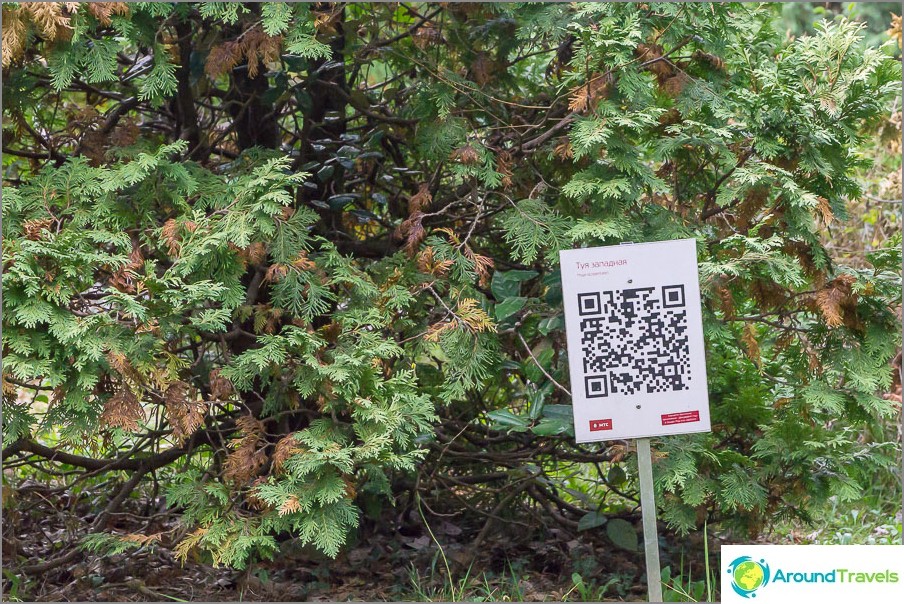 Some plants are not only signed, but also have a QR code 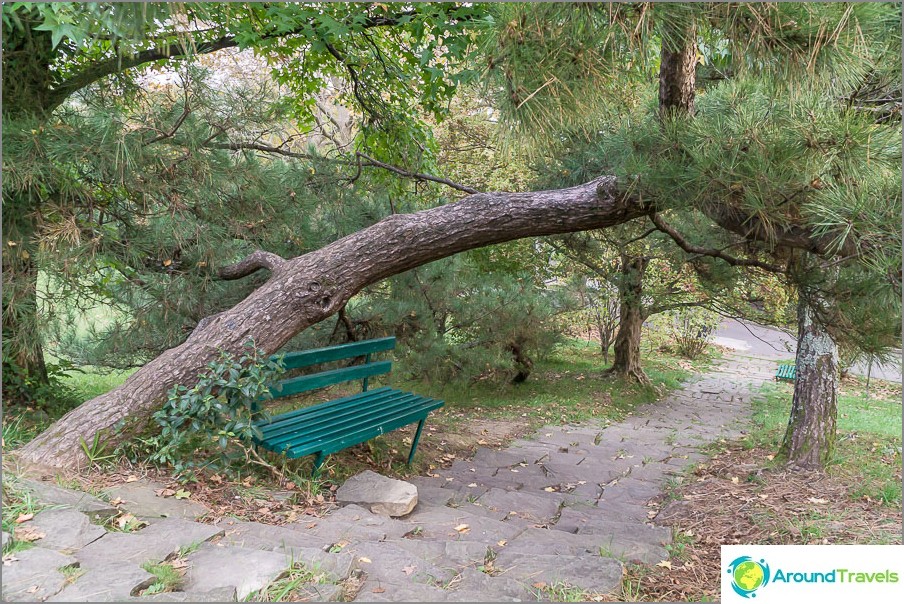 What a romantic shop 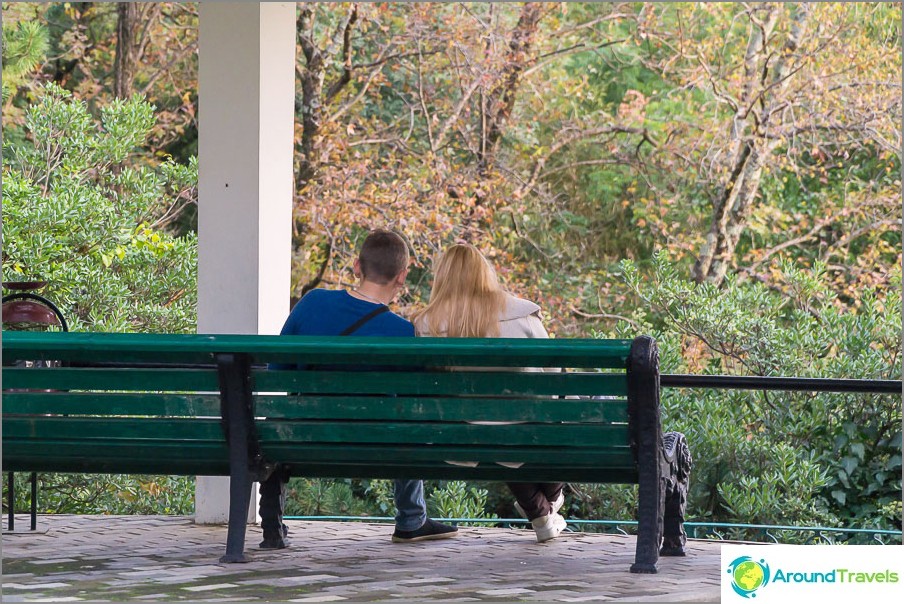 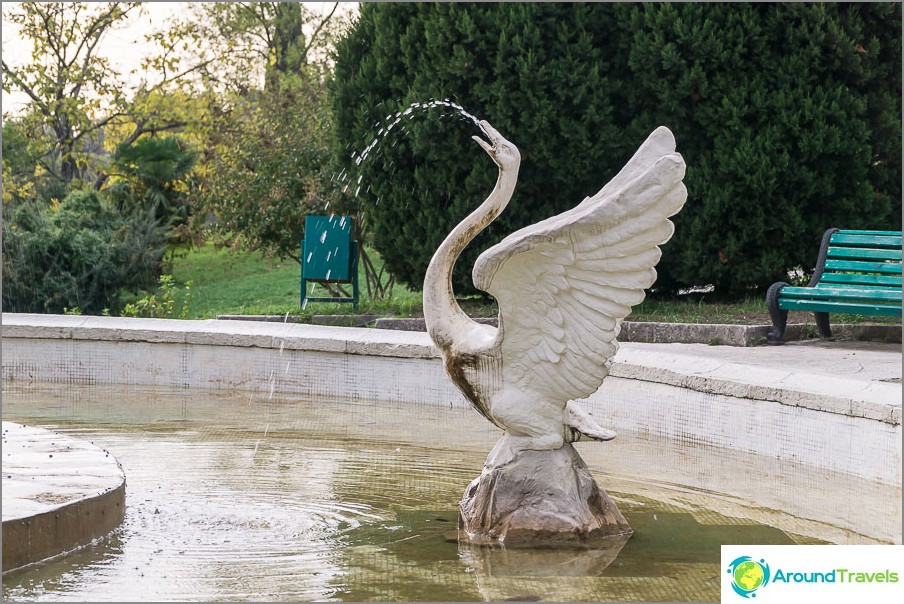 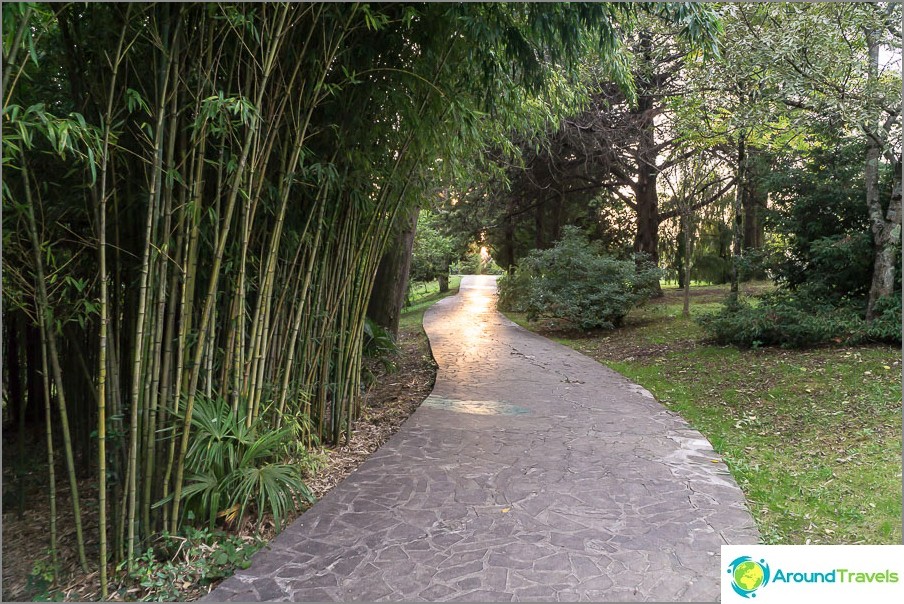 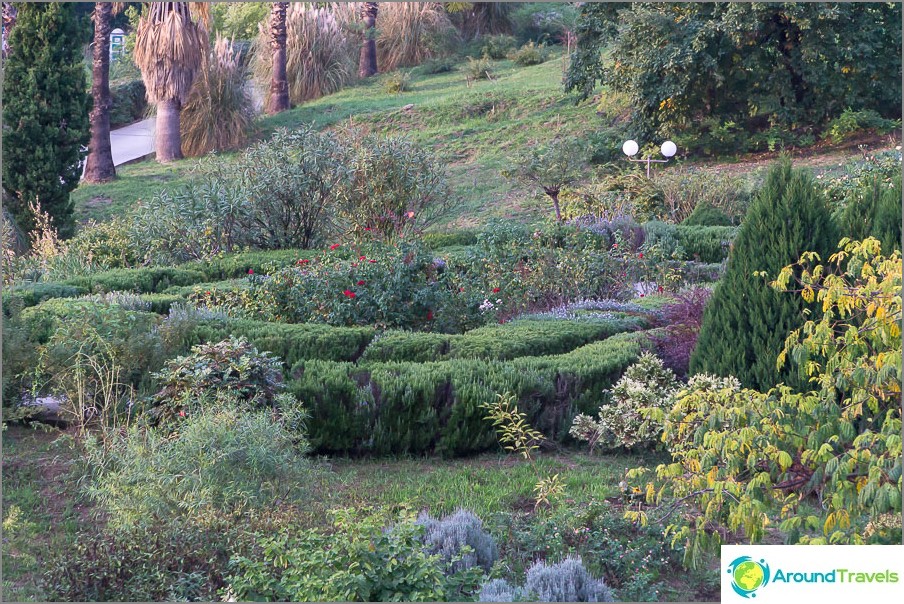 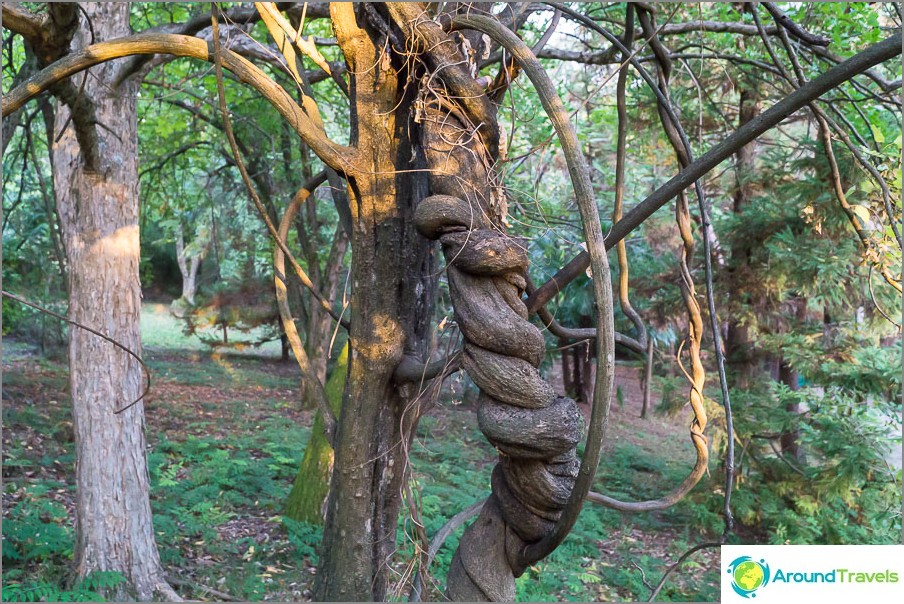 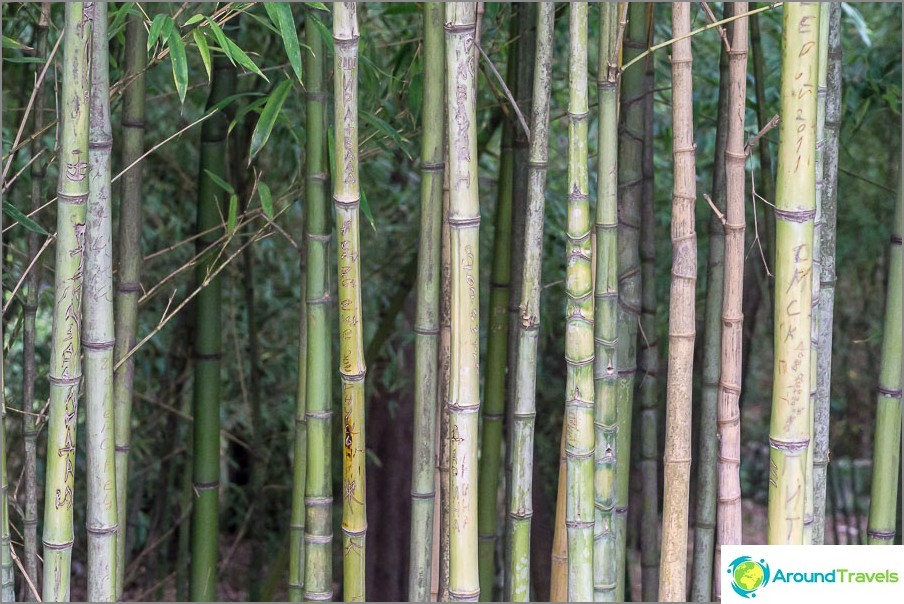 Separately mention the "Japanese garden". Metasekvoi with their orange needles on the lush green grass struck me, very beautiful. It happens, I see some small corners of nature, even man-made, which I would like to embody in my own house. They look so organic ... I want to stop here, relax, sit and think about life, or just relax. If you are prone to such moods, then put in more time to visit, otherwise you will have to run like me. 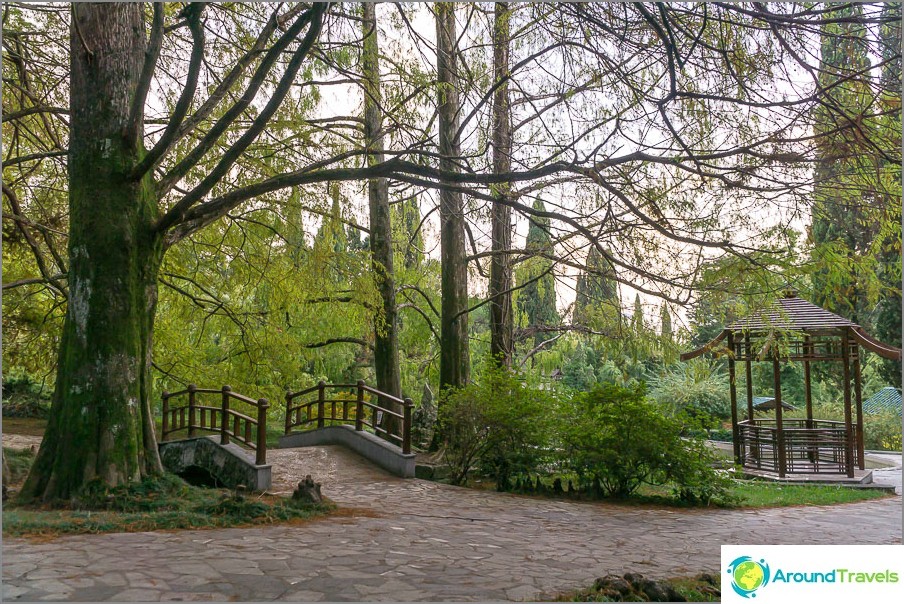 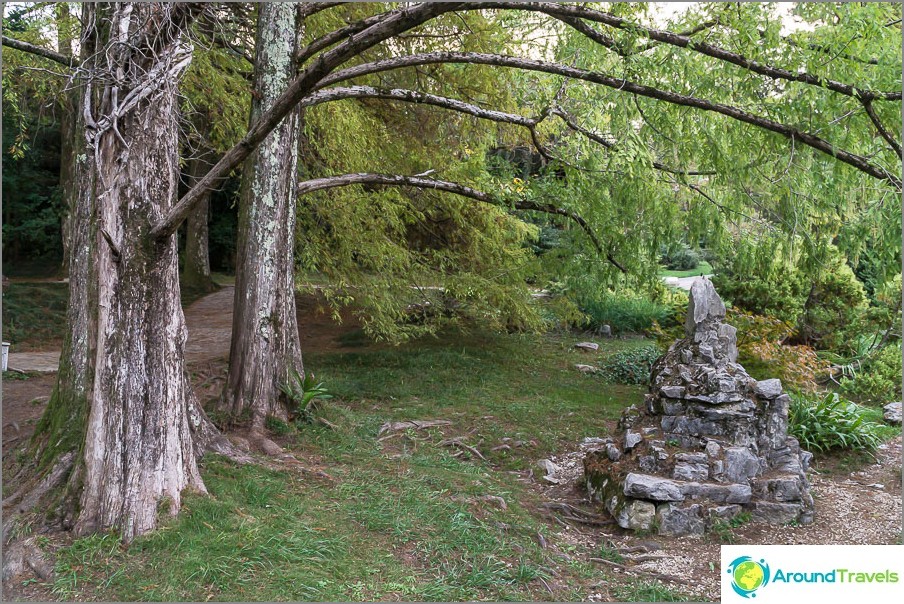 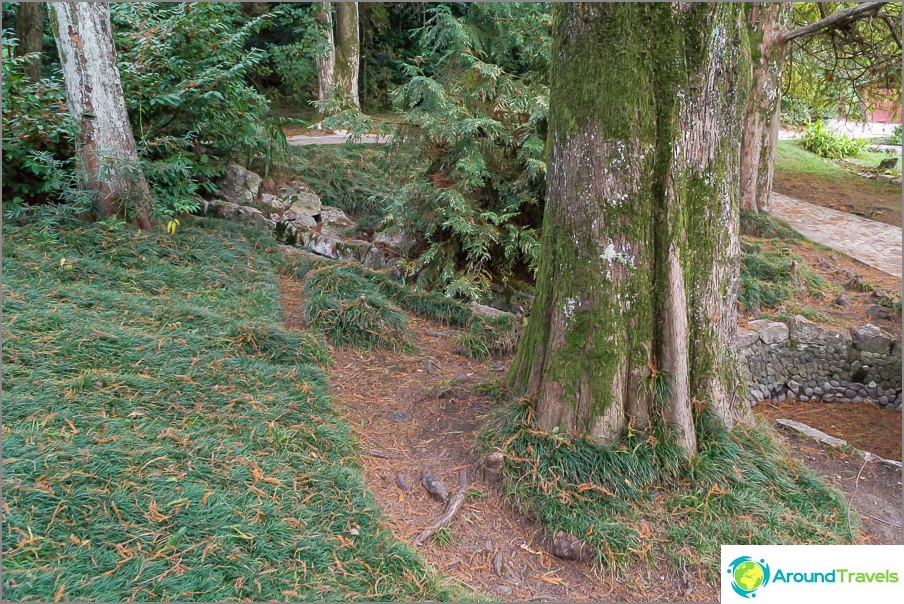 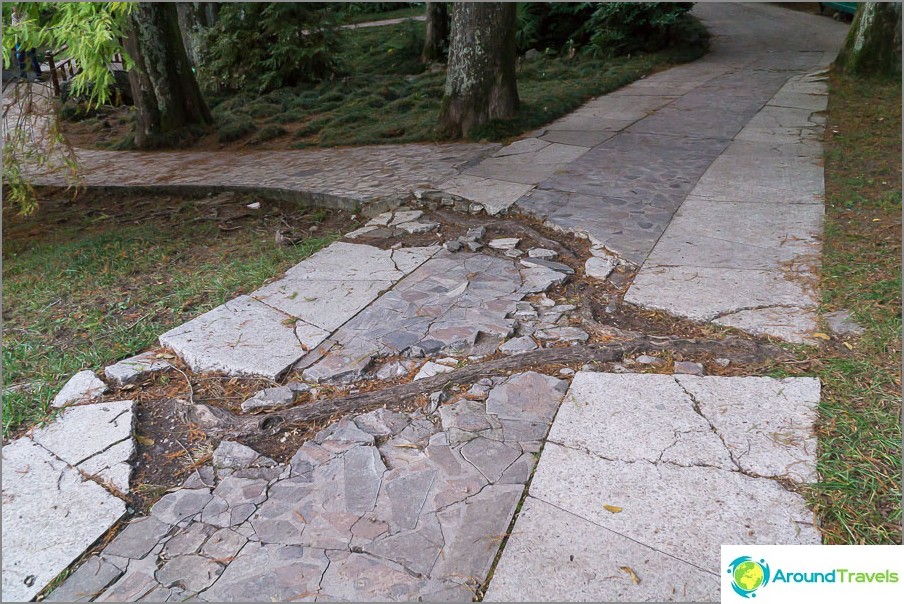 The roots of the trees broke the path 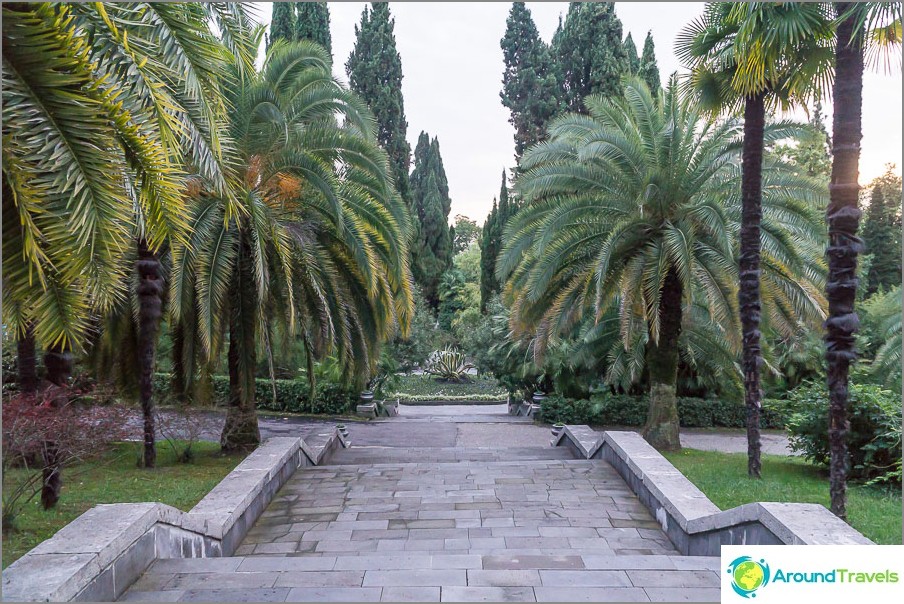 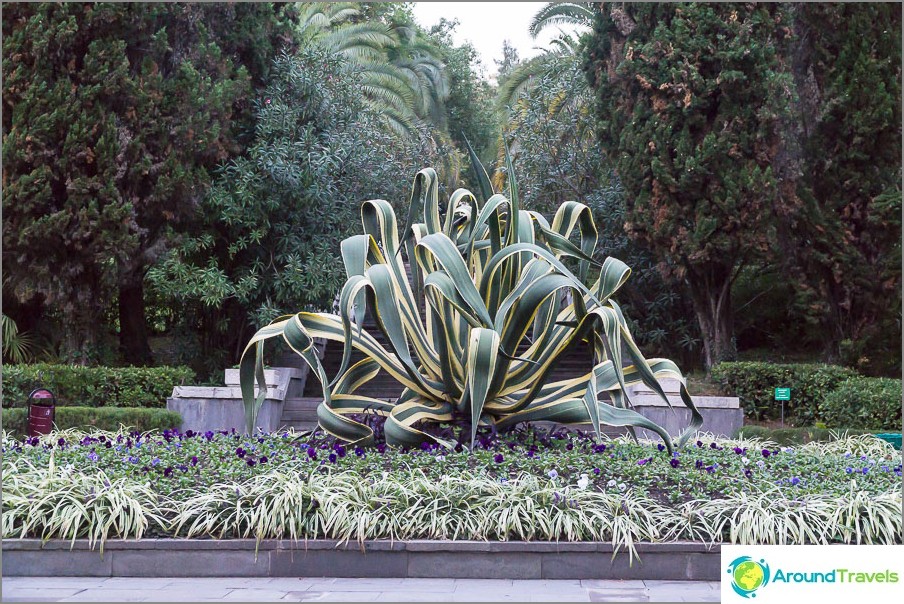 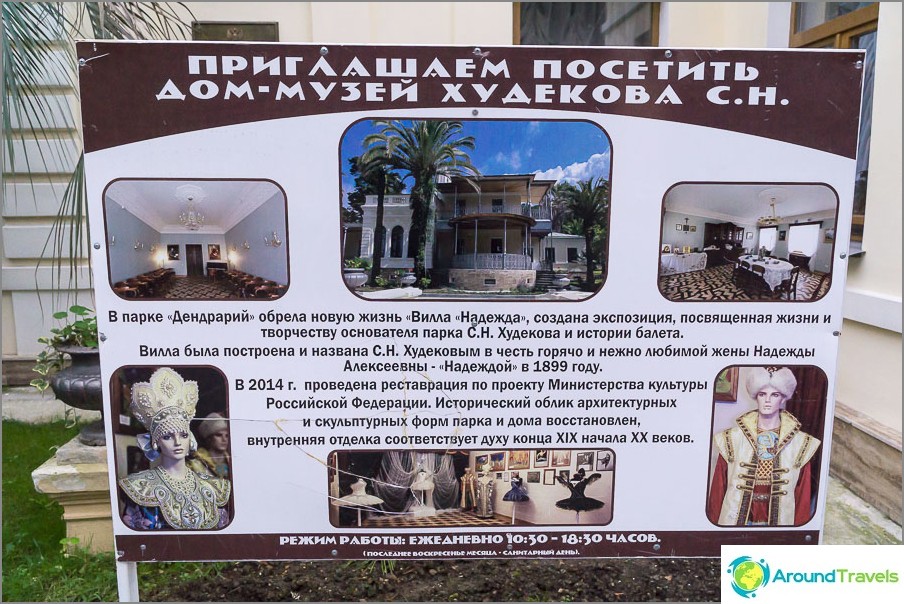 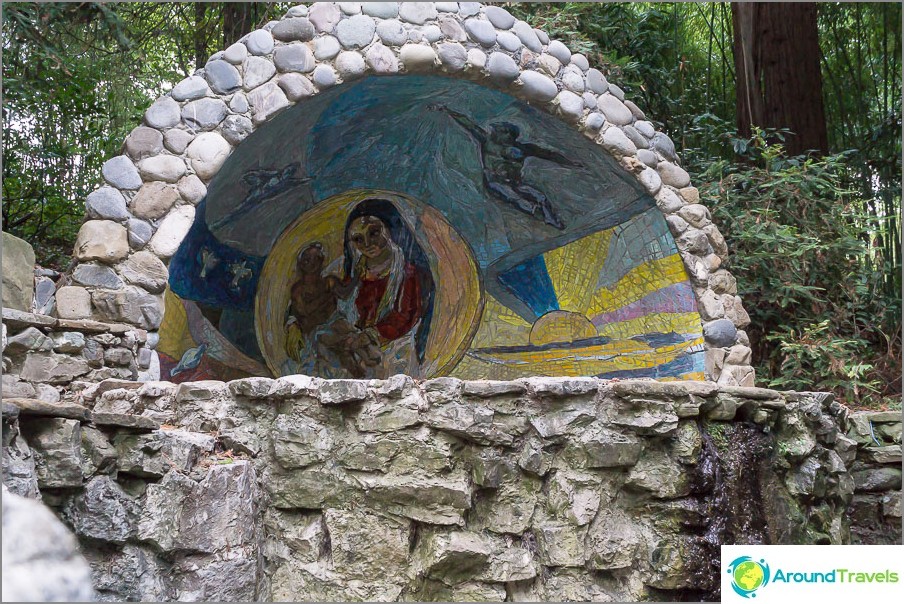 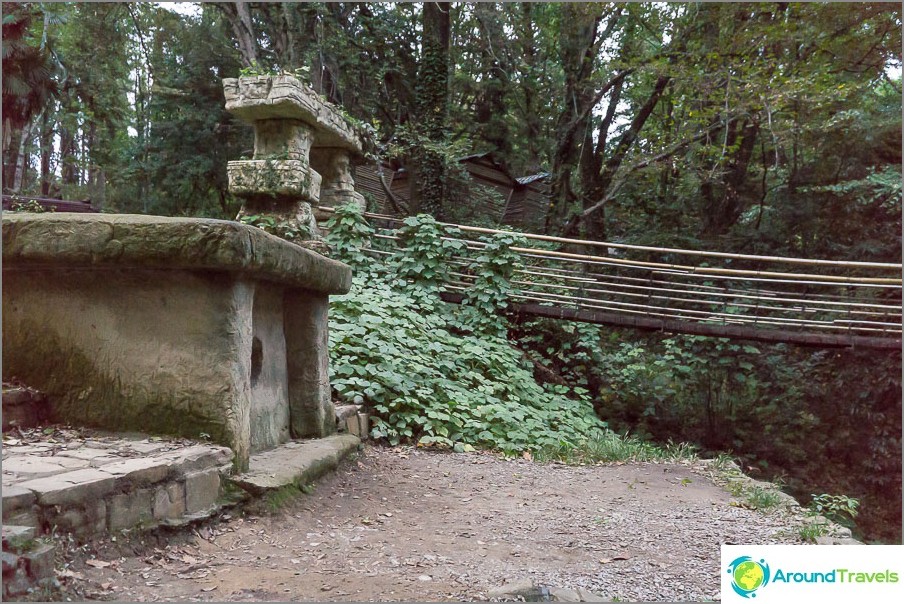 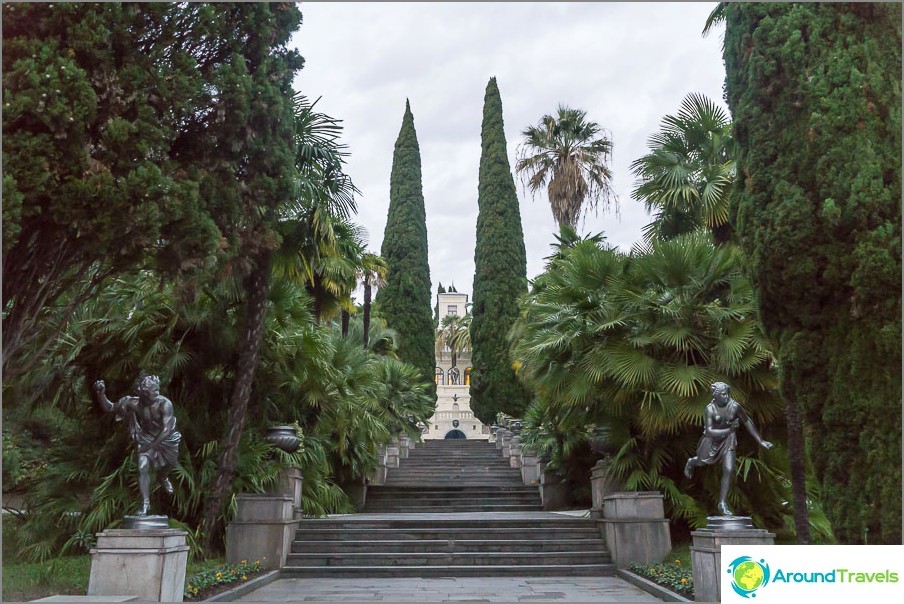 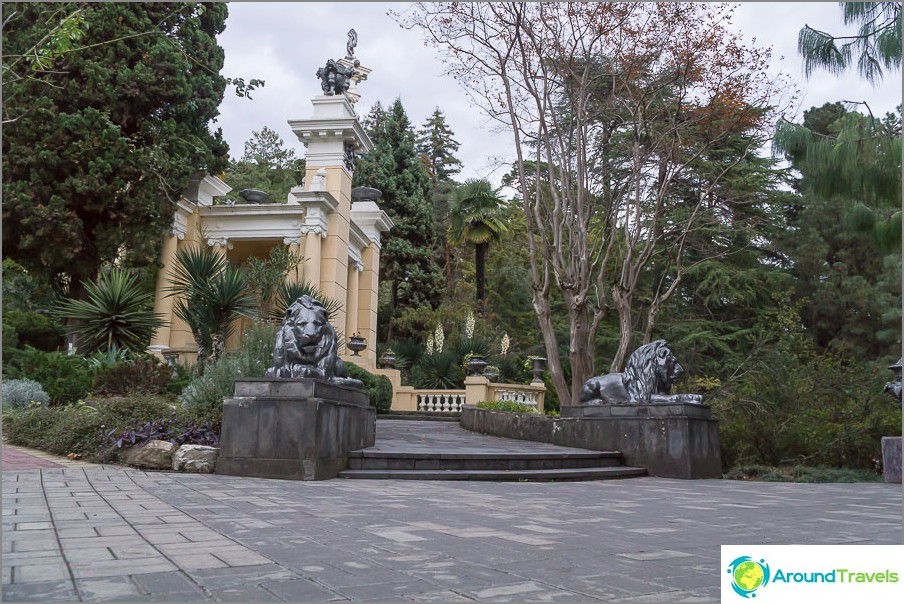 In the background is a gazebo

The history of the Sochi Arboretum, which is nowdeclared a monument of landscape art, began in 1889, when collector, playwright and publisher of the Petersburg newspaper S. N. Khudekov bought 50 acres of land on the slope of Lysa Gora in Sochi. In 1899, the Villa Nadezhda was built in the center of the plot, named after the owner's wife, Nadezhda Alekseevna, and a park with plum and peach gardens was laid on 15 hectares of land. Plants for the park were brought from the Crimea, Germany, the Caucasus - only about 400 species of trees and shrubs. The park was modeled on the French-Italian terraced parks of the late XIX century and was constantly replenished with new plants. By 1917 there were more than 550 species in the park. In addition to plants, it was decorated with sculptures, stairs, gazebos and magnificent vases, ordered in France.

In 1922, a new era began in the life of the park -It was nationalized, and in 1944 it was transferred to the Sochi forest research experimental station. In the early 60s, the area of ​​the arboretum grew to 48 hectares. There were ponds with cascades, a rose garden, geographical zones in which plants of the Caucasus and the Mediterranean, North and South America, East Asia (Japan, China, the Himalayas, the Far East), Australia and New Zealand are represented. Now the arboretum has a large collection of pines, oaks, palm trees, cypresses, here grows many rare subtropical plants. Arboretum in Sochi consists of two parts: the top and bottom. In the lower part there is an aquarium in which the inhabitants of the Black Sea are represented, and there is also a pond. In the late 70s, a cable car was opened in the arboretum. A panoramic view of the city, the coast and the park itself opens from the observation platform at the highest point of the arboretum. In 2012, the Sochi Arboretum became part of the Sochi National Park. At the same time, in the Upper Park, the layout of the tiled dolmen is open. Every year from the Arboretum more than 1000 samples of seeds of rare plants are sent to different parts of the world.

Arboretum opening hours: from 8 to 21 in summer, from 9 to 17 in winter. Change depending on the time of year, works all year round without breaks and weekends.
The cable car is open from 9 to 16. 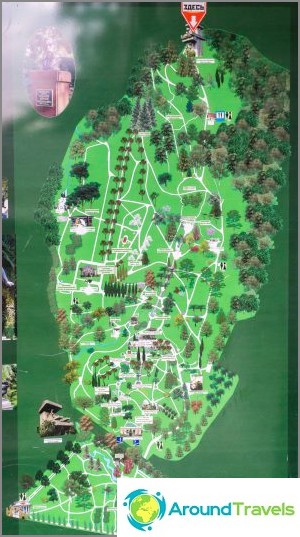 Parking at the arboretum is not. At the time of my arrival there was parking at the intersection of Jan Fabritius Street and Kurortny Avenue. As parking, it was not designated, although there were a lot of cars.

An amusement park in Sochi is a full-fledged park ...