How baht (tugriks) are converted into rubles - a concrete example

I once wrote an article on How to withdraw money in Thailand, in which I periodically add something newor remove obsolete data. However, separately I want to draw attention to how to convert bats into rubles. However, the conversion scheme concerns not only bats, but any other currency, that is, those countries whose local currency is not dollars and not euros.

An article for those who do not know and do not understand the scheme.conversions and upset about the allegedly high commissions. There are more often not commissions, but simply exchange differences play a role. Although the choice of the bank is serious, especially if you are driving for a long time, because even 1-2% of losses over a long period of time (for example, half a year) is already a significant amount.

The general scheme of converting baht (tugriks) into rubles

There is no direct exchange rate of rubles for Thai baht. This refers to the one that is posted everywhere on the Internet (cross-rate), and according to which people are used to transfer the ruble to baht. And when it comes to estimating in your mind the order of prices in the store, you can use the cross rate. Once the ruble and the baht were about equal, but now the ruble has sunk strongly and 1 baht = 2 rubles, that is, all prices in Thailand should be multiplied by two.

When money is removed from the card, you can alsouse cross rate, but this is a rough calculation. It would be more correct to count in dollars: to convert bats into dollars at the rate, and then dollars into rubles. In that order THB => USD => RUB. Only then will the real exchange rate be obtained. 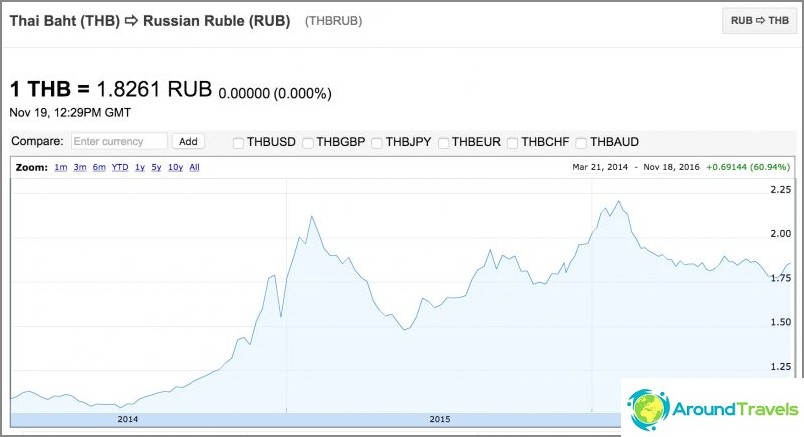 Conversion scheme on the example of Thailand and the rublecards are as follows: we remove bats at an ATM, an ATM sends a request to the payment system (Mastercard or Visa) in baht, the payment system recounts it into dollars (depends on your bank, maybe euro), and after that the conversion of dollars into rubles occurs. That is, the scheme in most cases is THB => USD => RUB.

Let's take a closer look at which commissionscan be when transferring rubles to Thai baht via a bank card (cash withdrawal or payment in the store). Naturally, all commissions differ depending on the particular Russian bank and need to be checked at your bank in tariffs, or use summary signs from the forum banks.Ru.

This scheme is applicable, as I said above,for any country that has its own currency. Only the ATM fee will vary depending on the country and the maximum withdrawal amount. For example, in Russia, ATMs do not charge a commission and it is often possible to withdraw a maximum of 7-10 thousand rubles on a foreign card. Let me remind you that Thai ATMs issue 20-30 thousand baht at a time.

A specific example of the translation in numbers

Take this example from last wintering. I paid for purchases in the supermarket for 10,000 baht (if I’d rented at an ATM, then there would be another 200 baht commission). From my ruble debit Tinkoff withdrew about 17,500 rubles. Calculate how it happened.

Now we estimate, if the card was bucks. Then it would be removed just 297.97 dollars, because the first conversion of THB => USD is exactly the same. But the bucks had to be thrown into a dollar bill. And, if you have income in dollars, then everything is cool - only one conversion. However, most Russians have income in rubles, so it remains for them to either transfer a large amount there before the trip, or periodically make an online exchange. Let's take a closer look, because not everyone understands that buying dollars in advance does not always save the situation.

See how the course constantly jumps. He once grew very much, and now he throws 10-20 rubles in the corridor. By the way, I then, really, bought bucks, both at 62 rubles, and at 72 rubles, and not only at 54. You must understand and take this into account. Thus, throwing dollars into a dollar account, being in Russia, may be both profitable and not, it all depends on the exchange rate. Ideally, you need to monitor the course and calculate all the options, this is the question what money to take to thailand.

Perhaps it will seem to someone all toodifficult, but if you are in Thailand for a long time (and indeed abroad) and often withdraw money or pay for purchases, it makes sense to sort out this topic a bit so as not to pay too much for all these currency conversions. Specific examples of bank cards for travel, I voiced in the article Which bank card to choose, and there you can learn more specifically about the commissions of different banks.

P.S. The courses given in the post are already outdated, but the conversion scheme itself remains the same!

How to buy a bus ticket over the Internet ...