I know that it is trite for experienced travelers,but I can't help but post a mini-report about the Avenue of Stars in Hong Kong and the light show there. As a rule, everyone happens to be in this alley during the day, but I didn’t want to look at the stars bricked up in concrete directly, so it was decided to combine it with watching a light show that starts at 8 pm and takes about 15 minutes. I want to note that if you stop at Chunking mansion or somewhere else on Nathan Road, the embankment will bethe only normal place for walking. Although no, I lie, there is still a park near Kowloon, but there is no sea flavor and tourist attractions, just a park and that's it. Remarkably, free wifi was caught on the waterfront, that is, you can sit for work or just surf on the Internet. I don’t know if he is there all the time or not, but there is Starbucks right on the beach, where you can also sit.

Although I sometimes like to watch various films,but I have a very bad memory for names, so I don’t know a single director and I remember literally about a dozen actors. In the Hong Kong Avenue of Stars, in general, all some people I do not know, and many, I think, too. From the familiar to me - the legendary Bruce Lee and no less famous - Jackie Chan, I remembered these two from childhood. And apparently I will never be able to forget the image of a person in yellow pants and a black stripe at the side, as well as another - forever fighting with the crowd with all the objects that come to hand. Then 30 years ago there were not so many films, and we watched them in poor quality on videotapes. Oh, how long ago it was something, now it fits on one flash drive as much as it did before.

In general, fans of cinema, probably, willInterestingly, you can attach your hands to the prints of the hands of the great ones and thus join them. Of course, the Avenue of Stars in Hong Kong is much more modest than Hollywood, but where we are and where America is. I flew to Hong Kong from Moscow by direct flight for 400 bucks of everything, but you cannot get to Hollywood for such a sum. 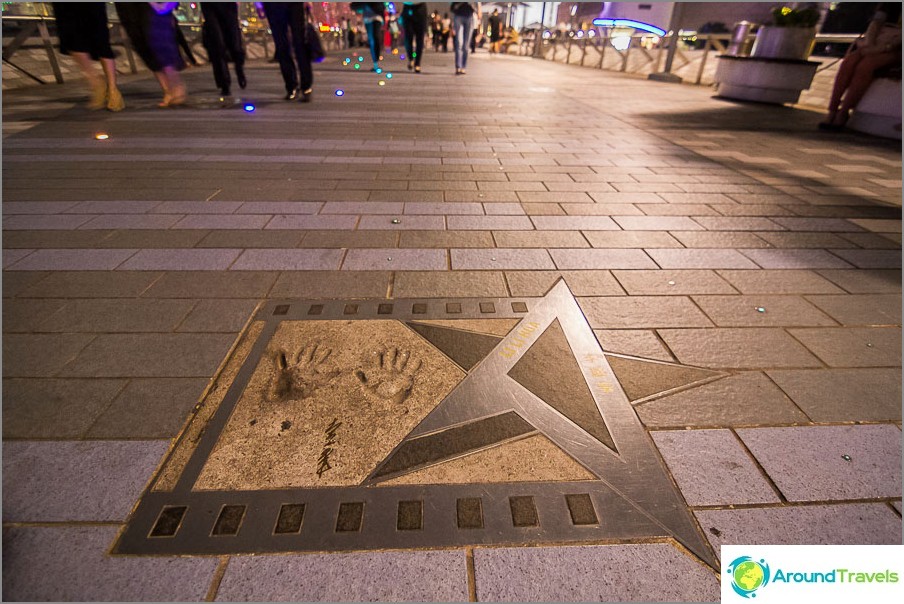 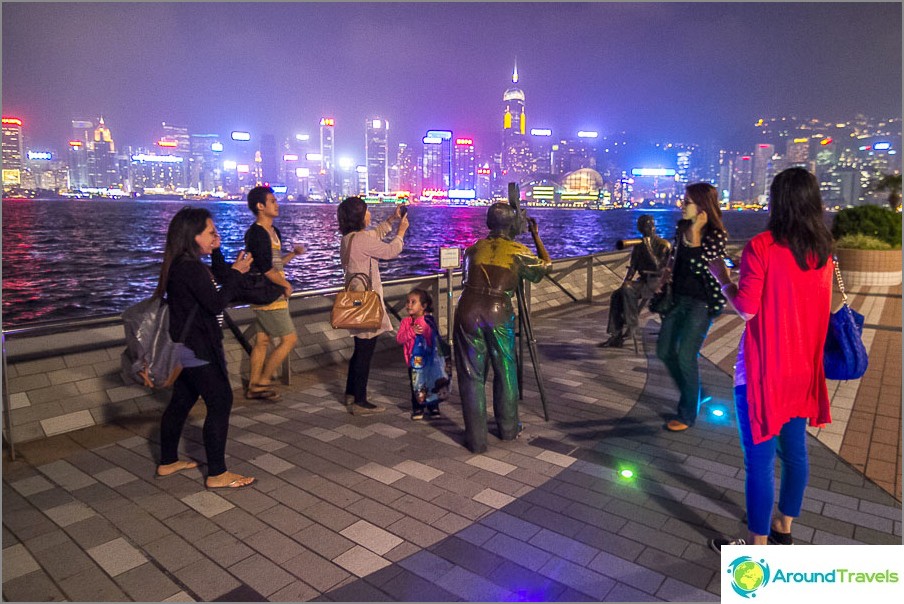 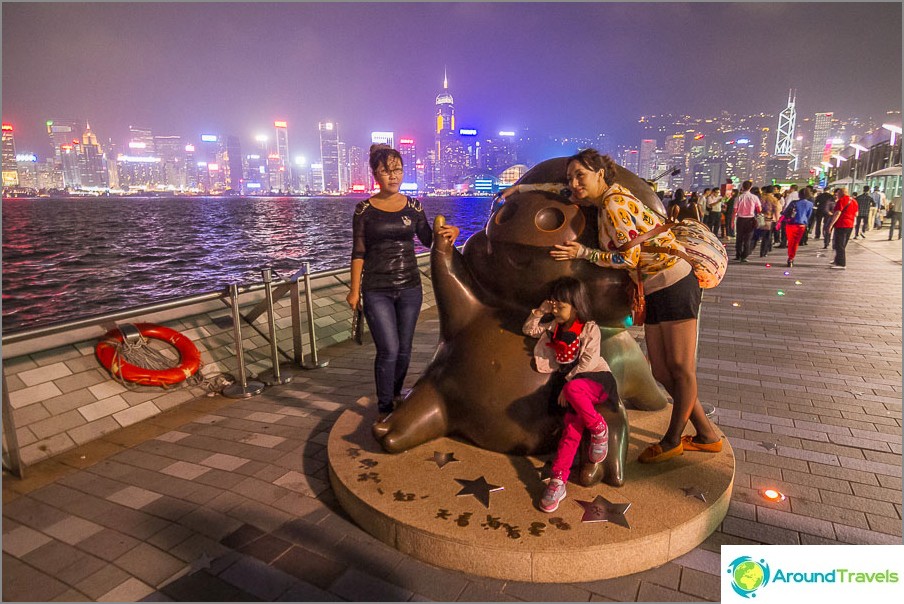 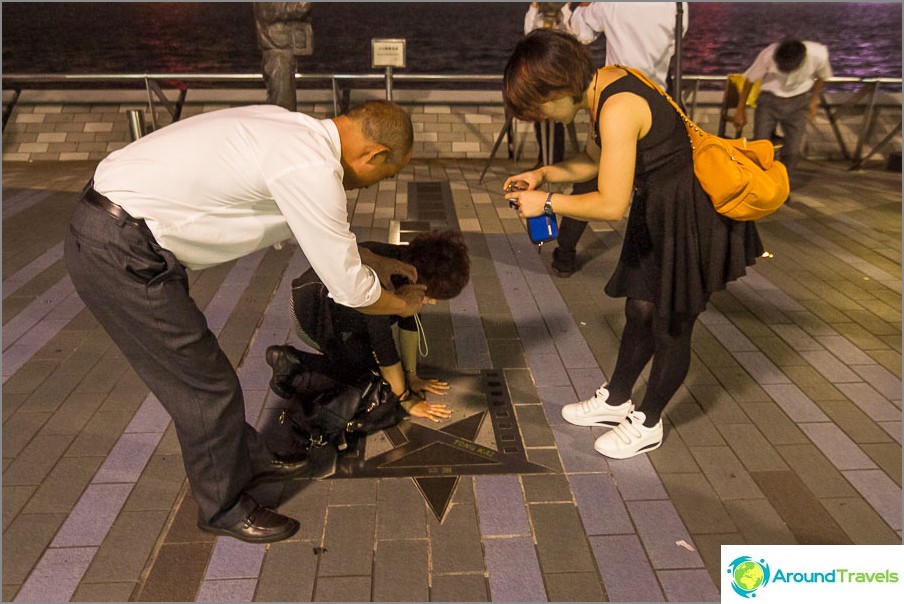 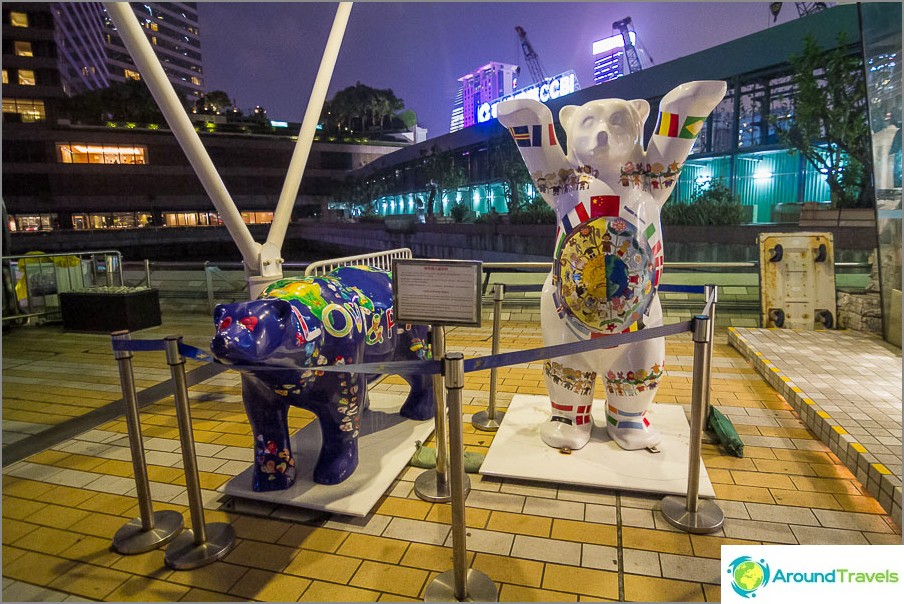 Famous bears are here too 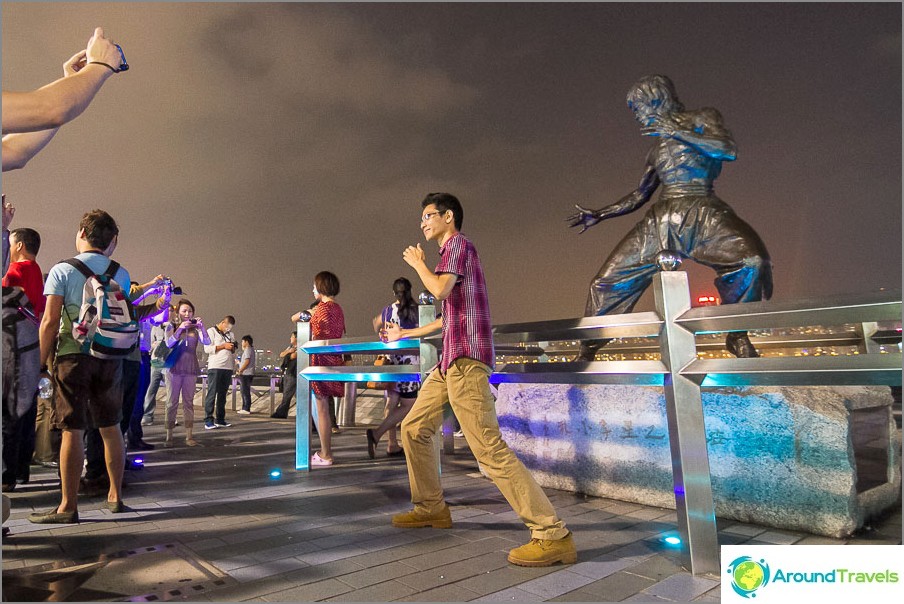 Near the legendary Bruce Lee 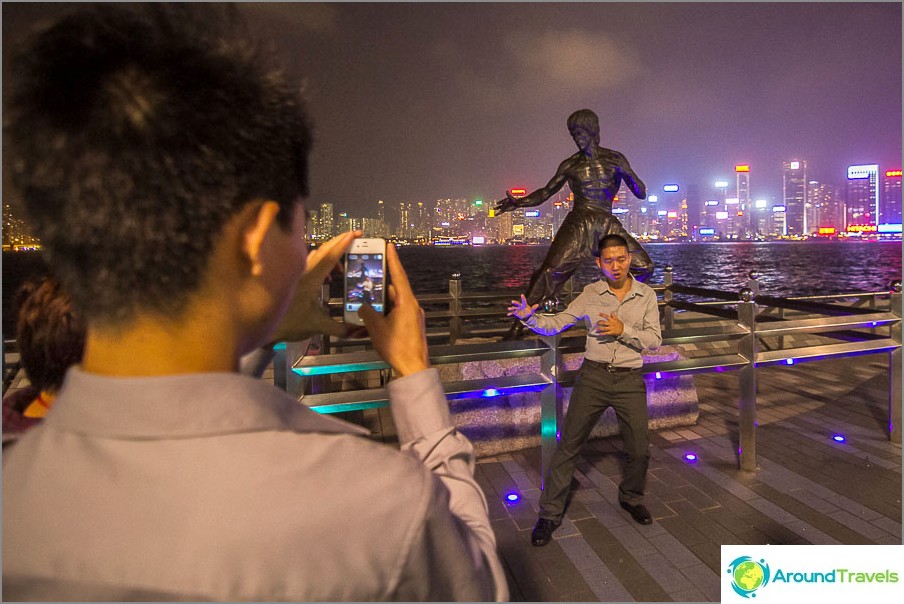 Who, in that much 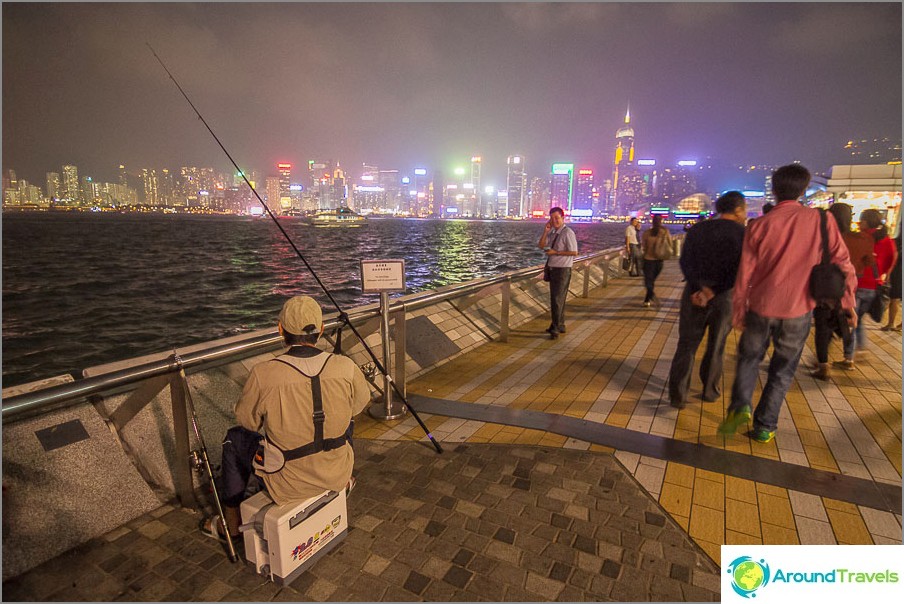 Someone is not soaring about the stars and just fishes

As I wrote, the laser show starts at 20.00 and is 15 minutes. It is a movement of laser beams in the sky and flashing lights in the skyscrapers to the music (not quite in tact). In fact, I will not say that this show is special for some, I was still waiting for a certain climax, but it never came. For what it was recorded in the Guinness Book of Records, it is not clear. I watched the show from the Kowloon Peninsula in the direction of the skyscrapers of Hong Kong Island. I think in the opposite direction if you look (from the embankment of the island of Hong Kong) the spectacle will be even weaker. However, you can watch the show, because in the evening there is nothing to do anyway, especially if you are not too tempted by the impressions. Perhaps on holidays or for some specific dates, everything looks much cooler, but I was not lucky. 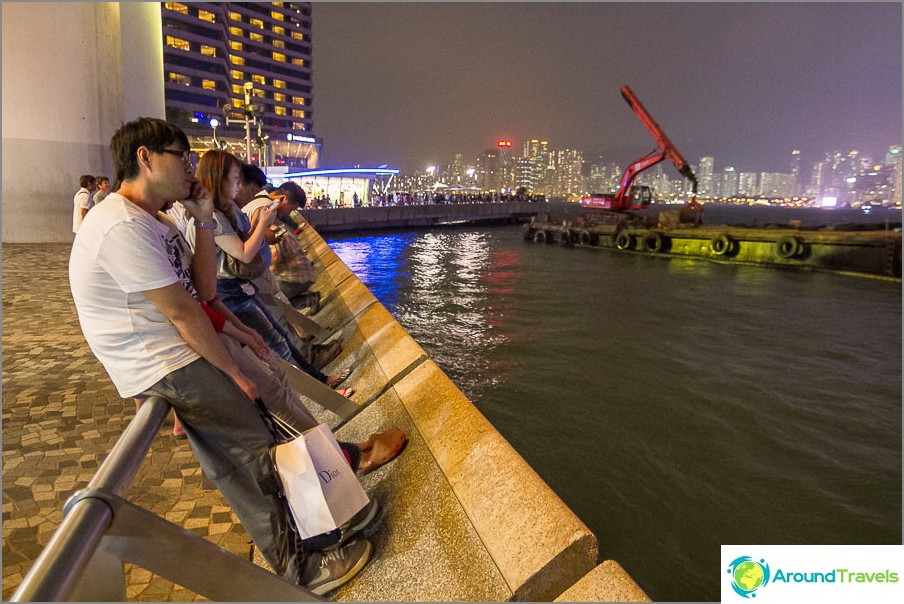 All waiting for a laser show 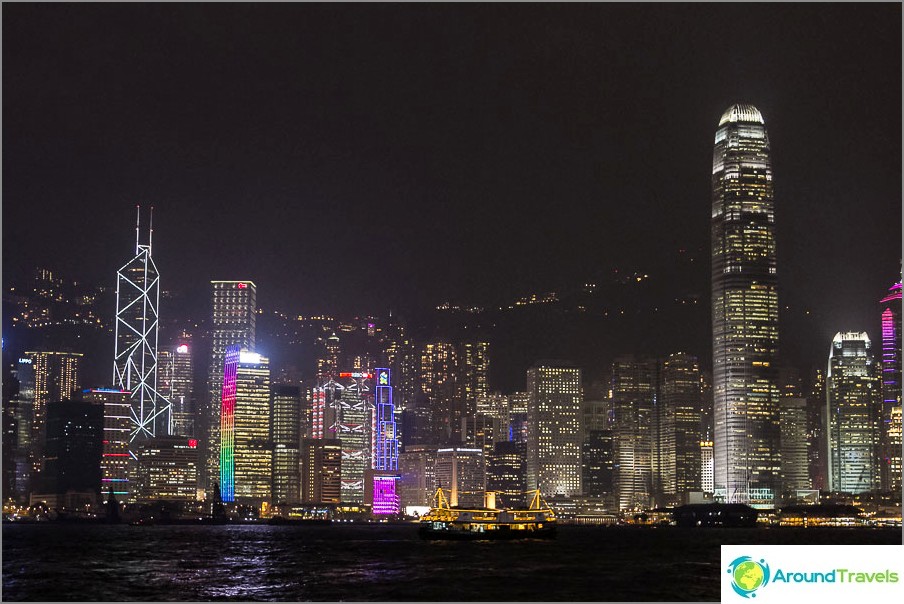 Before the laser show you can admire the skyscrapers 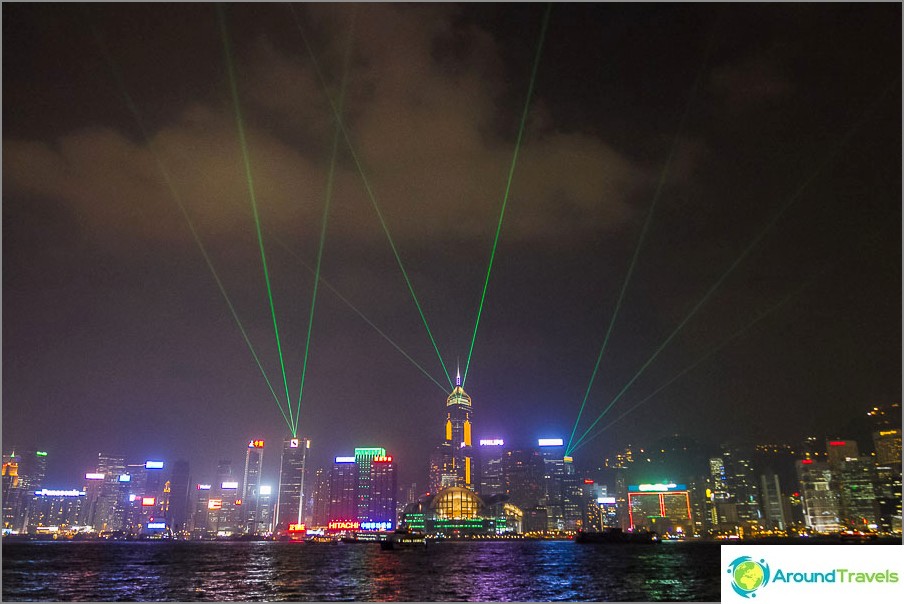 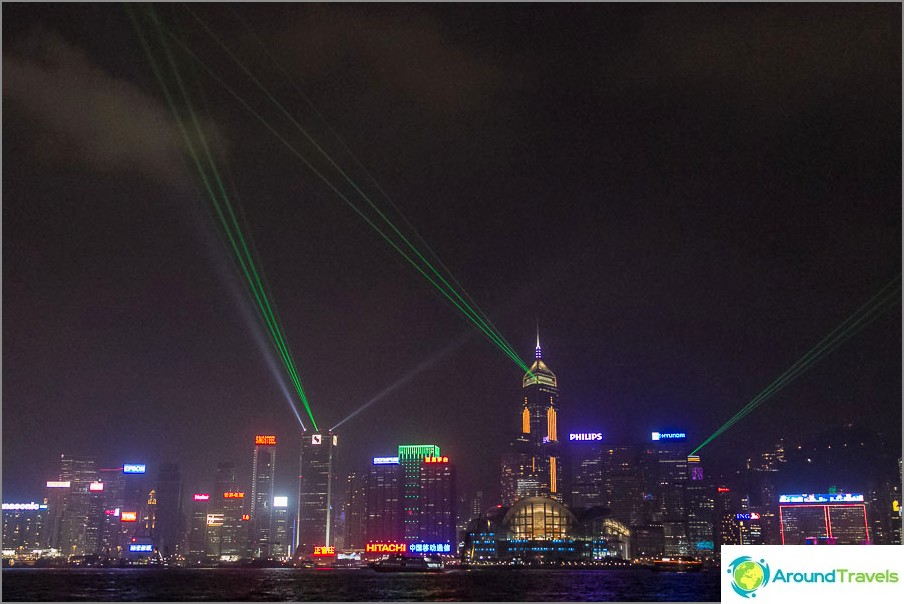 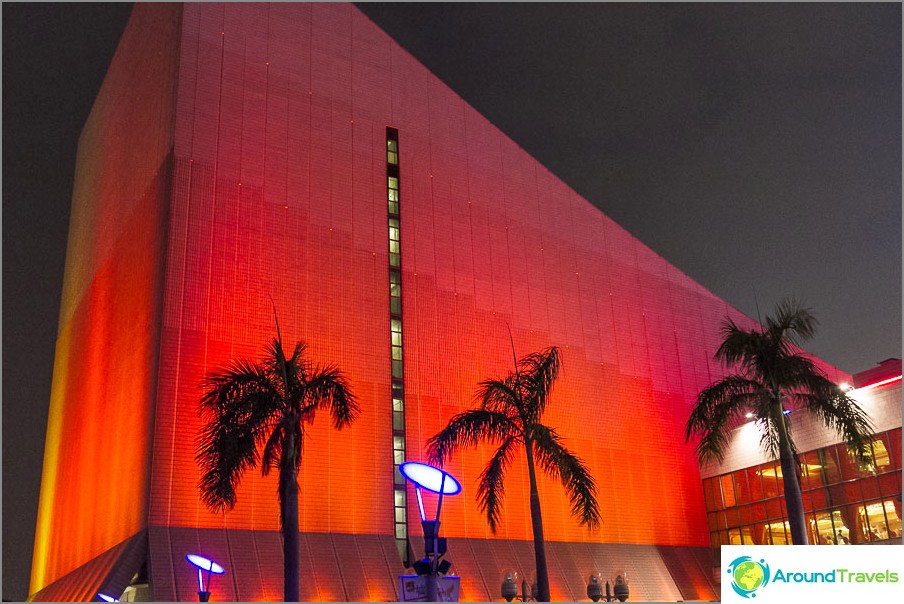 On the nearest building, the color changes constantly. 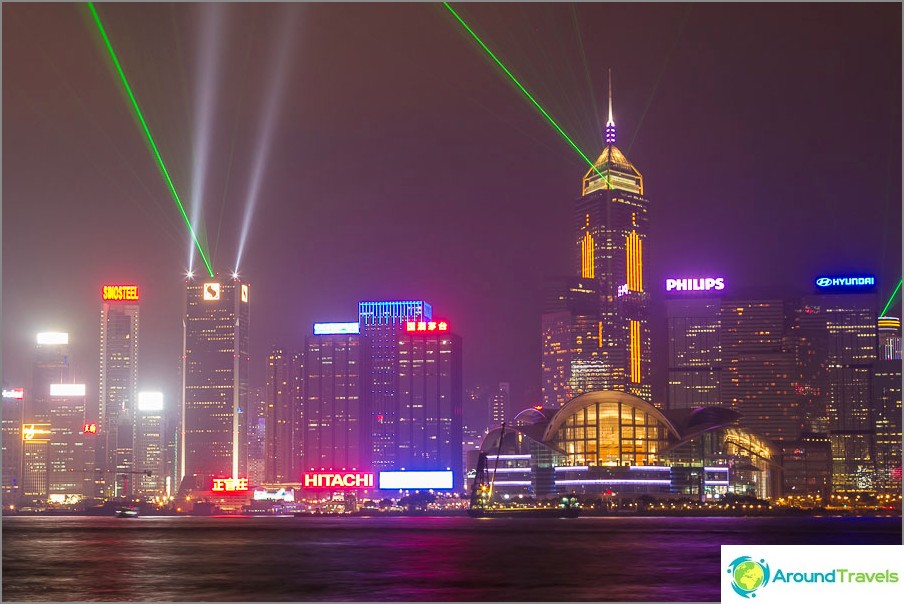 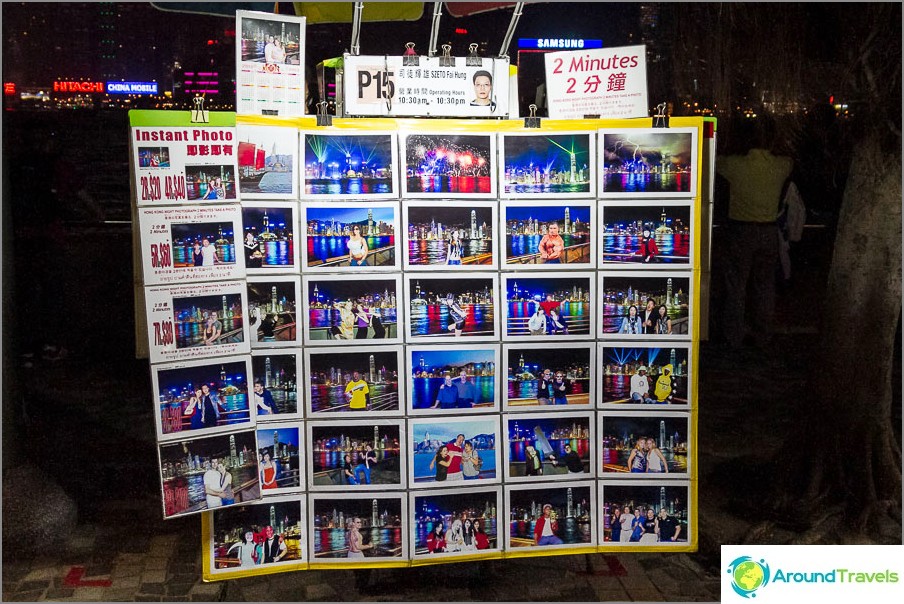 You can order a favorite photo with you right here. 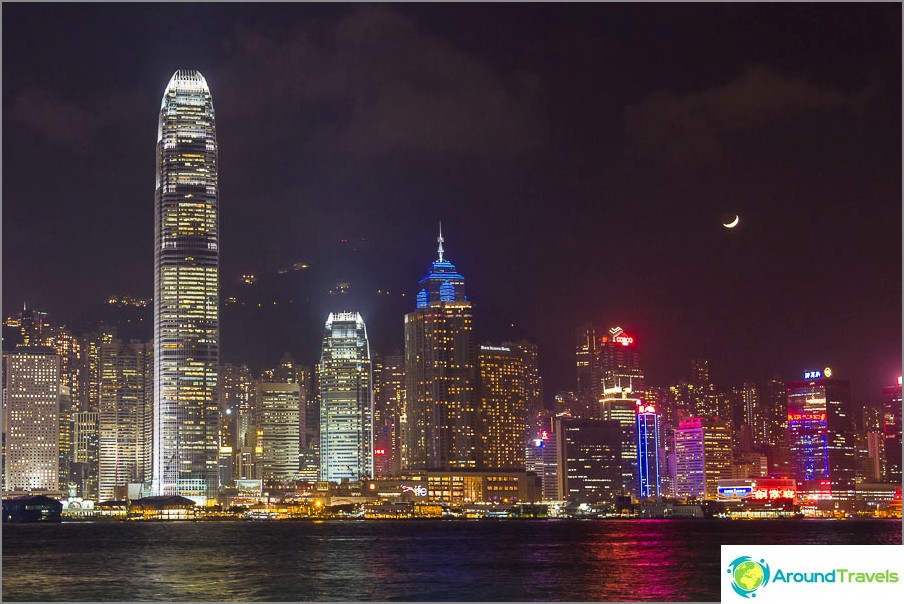 After the show again, just skyscrapers, only with the moon

Surroundings of the Avenue of Stars

To get the most out of your impressions.this place, it makes sense to walk around the neighborhood. There are periodically exposed figures of some characters, there are mimes, at the intersection of Nathan Road and Salisbury Road, there is a square with a huge tree on a high pedestal, a pavilion with a Time Ball mechanism and old artillery. And if you are tired of this side, then you can easily get to the island of Hong Kong by Star Ferry Ferry. 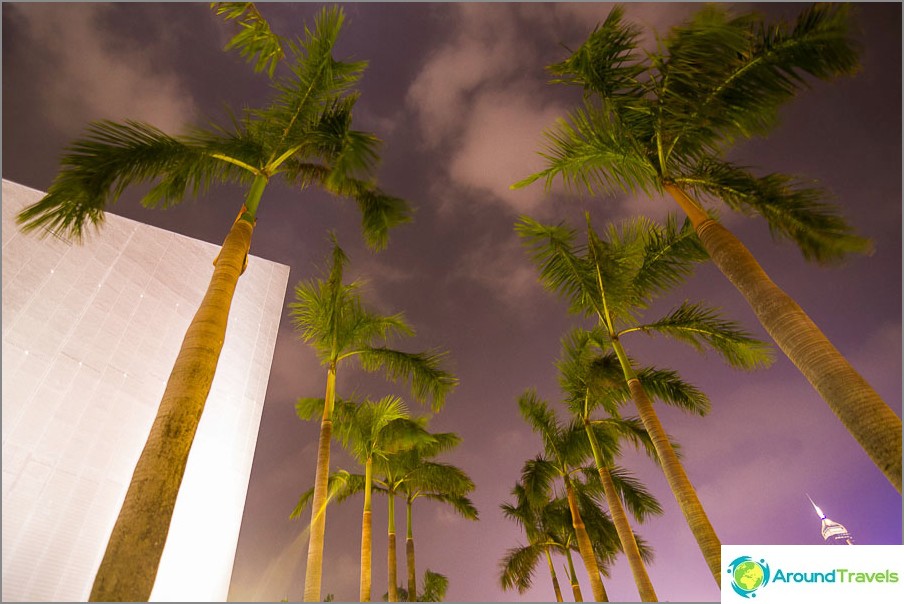 We go further along the embankment 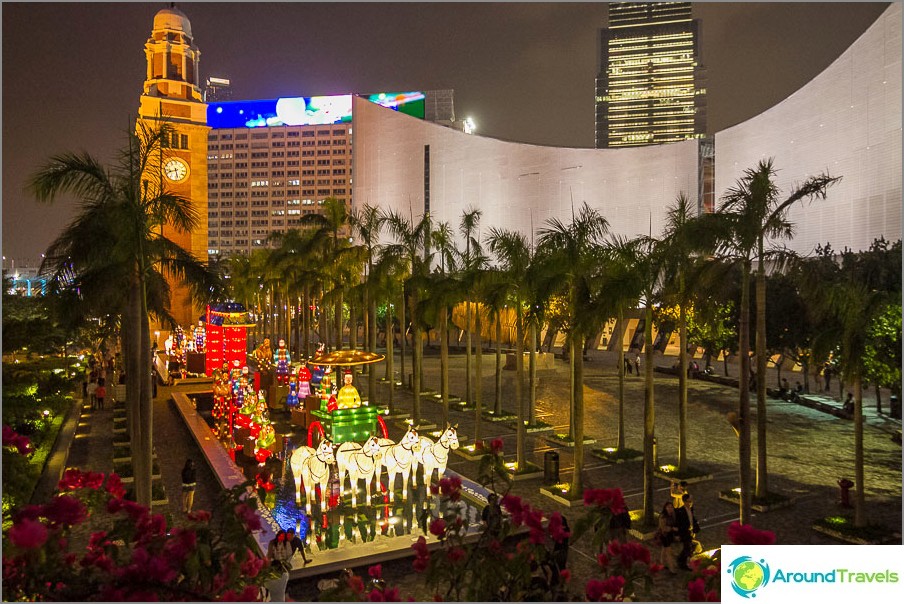 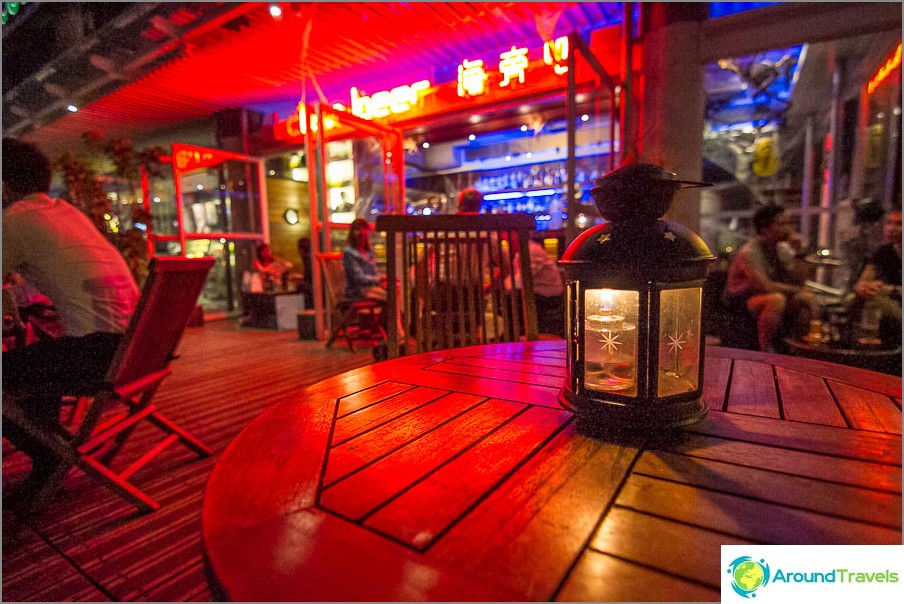 In the cafe there are lanterns from Ikea, I have the same house 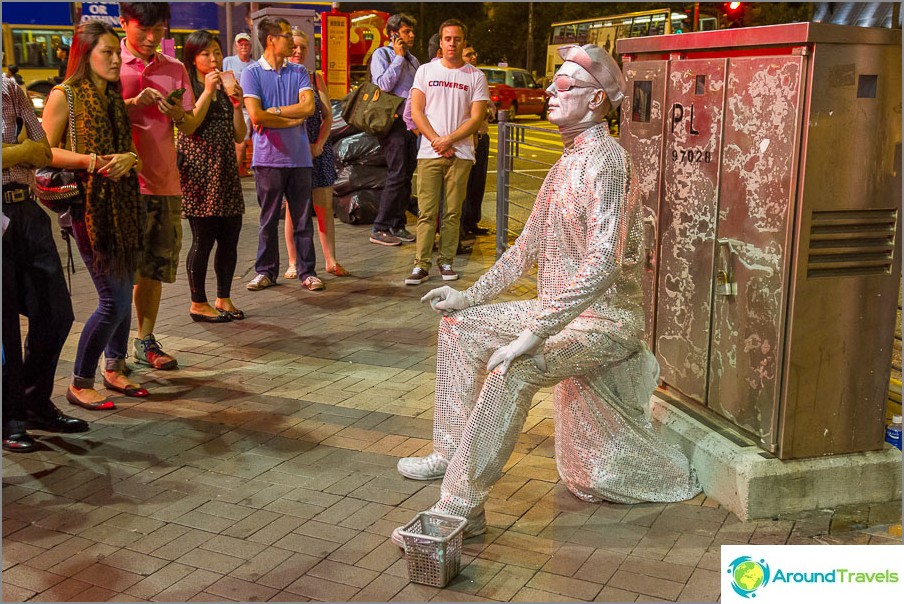 If you walk along the promenade, you can see the memes 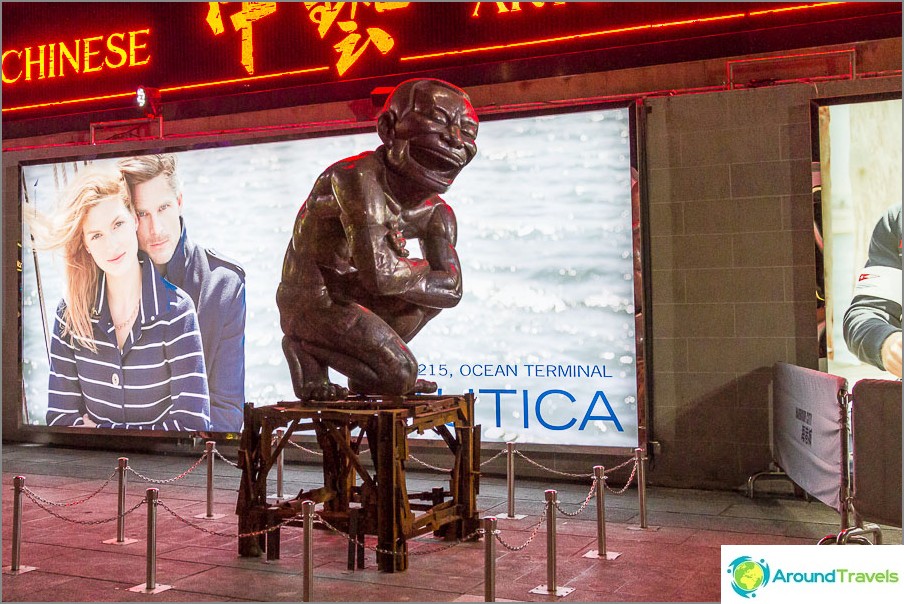 Or an exhibition of figures 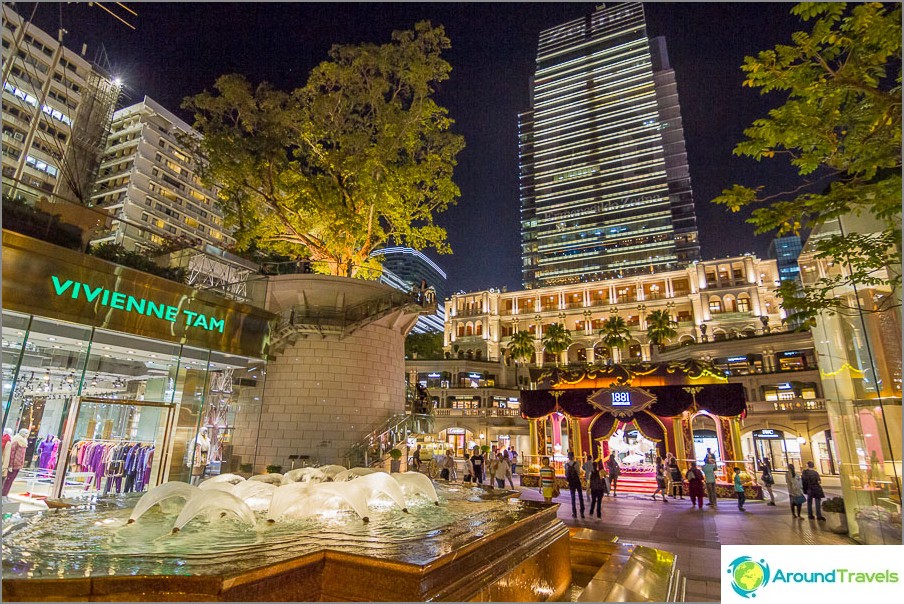 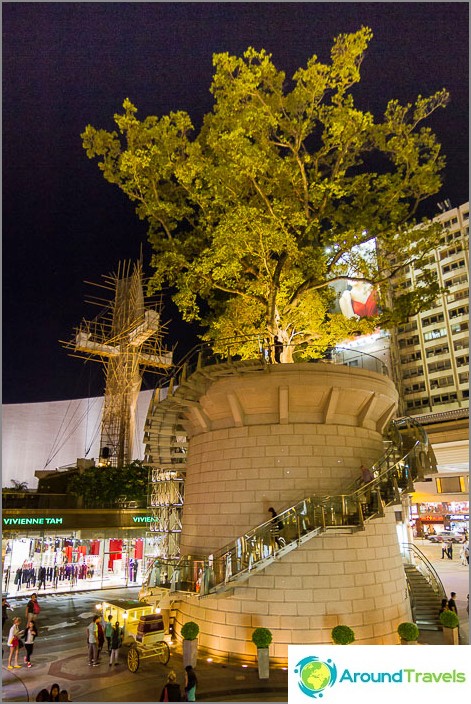 Tree on a pedestal 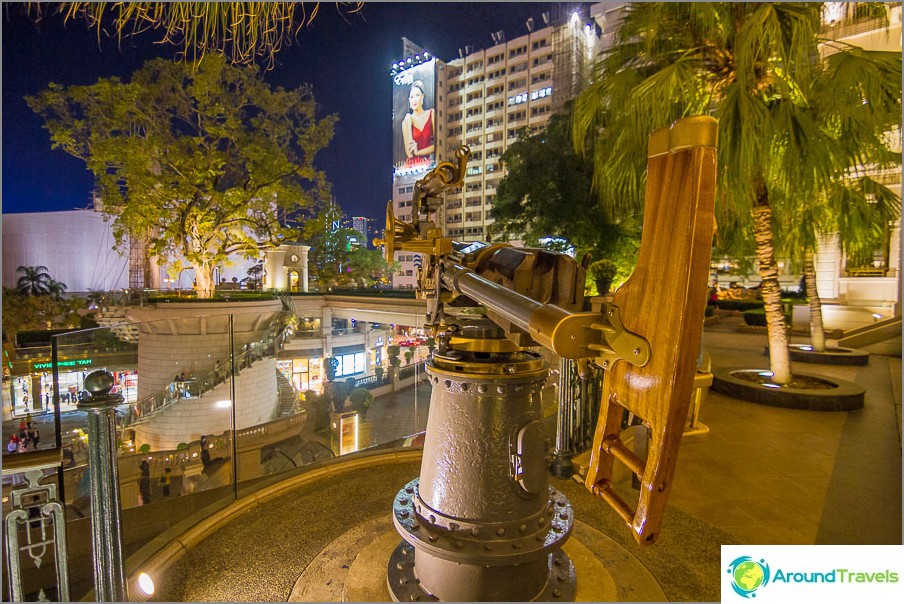 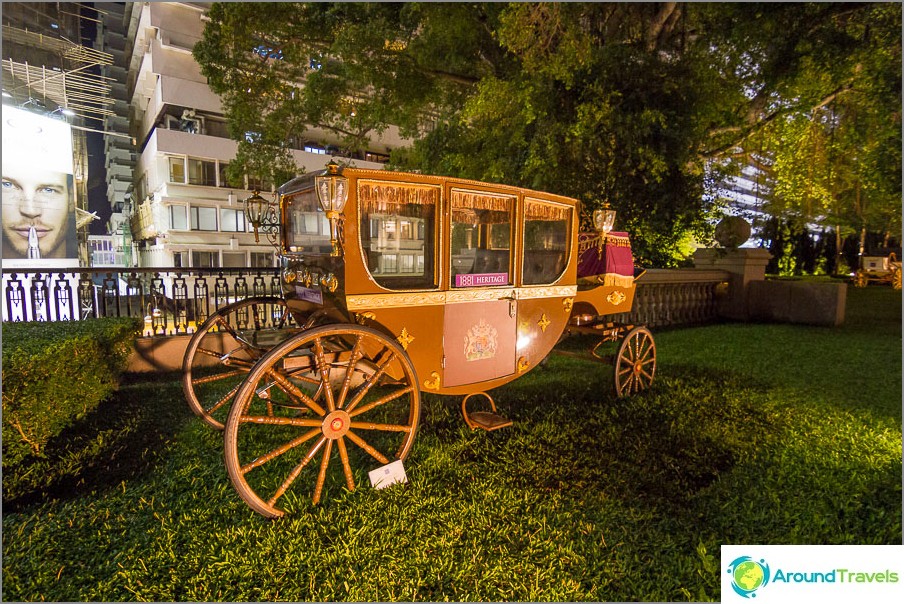 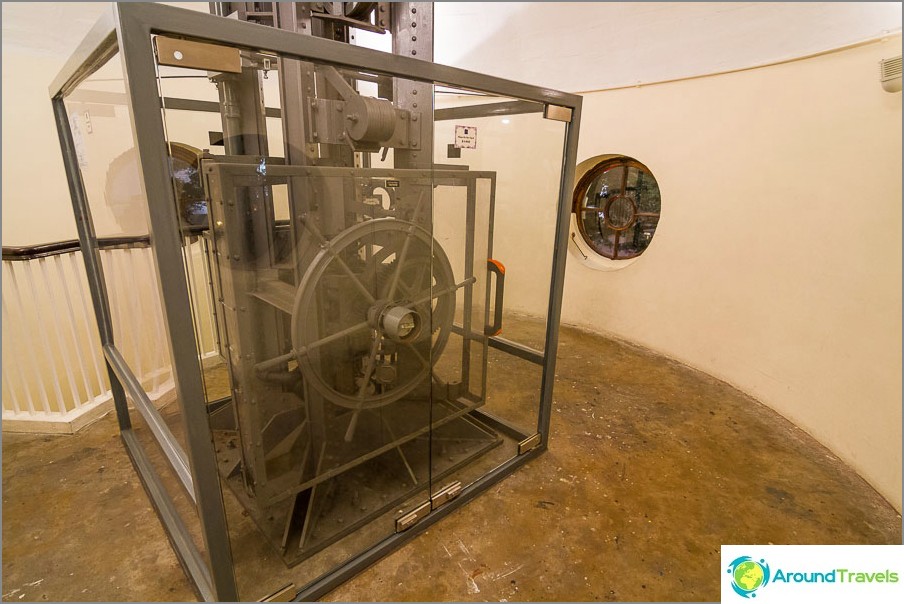 P.S. Speaking about other attractions, I recommend to see Victoria Peak and Big buddha. View of the city, beautiful natural views, mountains, trekking, cable car, it's all there.

We are participating in the first stage of the project "Russia ...