When planning our trip to Malaysia, we realized thatWe want to visit not only the sights of Kuala Lumpur, created by human hands, but also natural attractions. These were primarily the Batu Caves (Batu caves).

Although they are located 13 km north of KualaLumpur, getting to them is now much easier than before. The fastest and, as it turned out, the cheapest way is the KTM Komuter train (I’ve already told you about Transportation Kuala Lumpur). Moreover, if you buy a ticket in the machine, you will have to choose the station Sentul, because until Batu Caves the train began to go quite recently, and has not yet entered such a stop into the system. And at the box office you can buy a ticket immediately to Batu Caves, which we did. Surprised price in 1RM one way. By the way, in the opposite direction each ticket cost 2 RM. Apparently, this is due to misunderstandings with the recently appeared station. 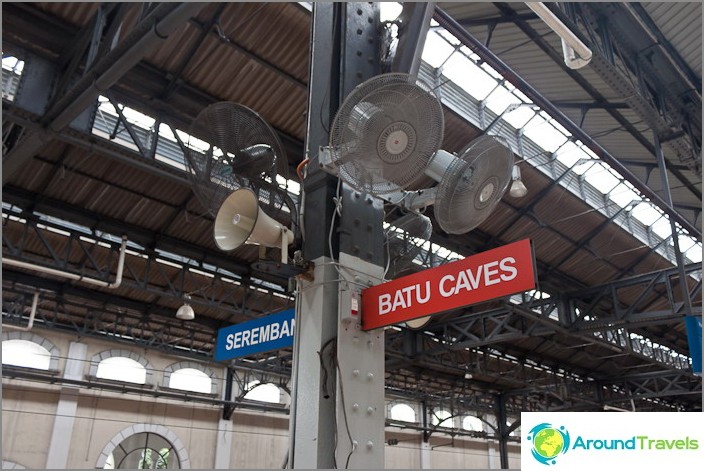 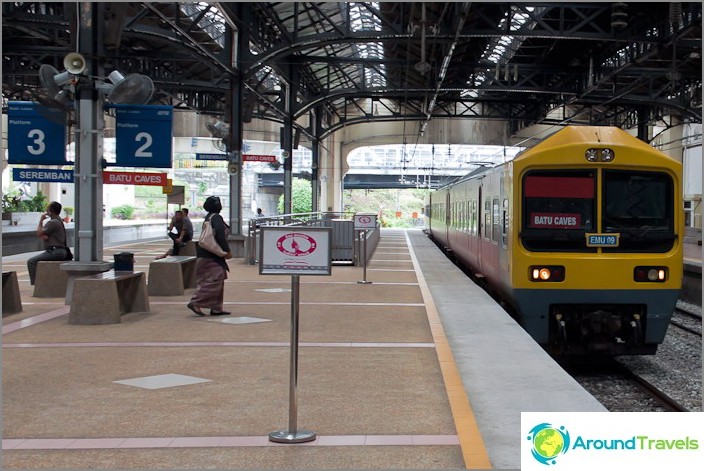 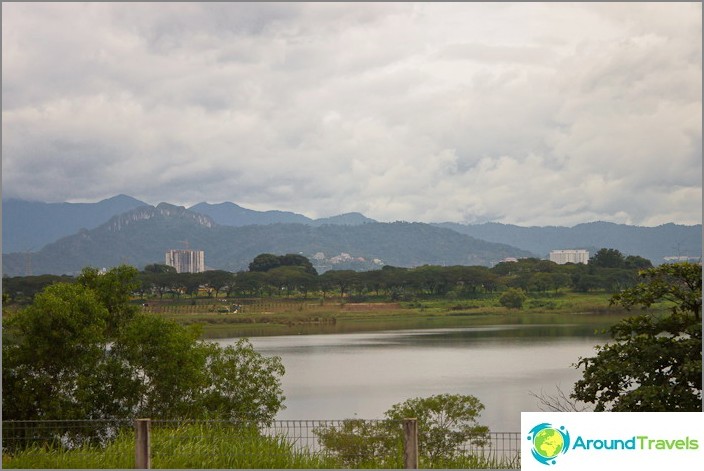 Views on the way to Batu Caves

We go out into the street - to the left, though not very high, but the mountains striking with their majesty, going up, and ahead some strange blue slightly shabby gate - this is the entrance to the Batu Caves.

The inconspicuous entrance to the territory of the Batu Caves

Come in - you get into real India! Most of the visitors to Batu Caves are Indians (or Indians?) With Indians in colorful saris. For them, this is probably casual clothing, but it looks quite bright and festive, because of which the place seems more colorful. 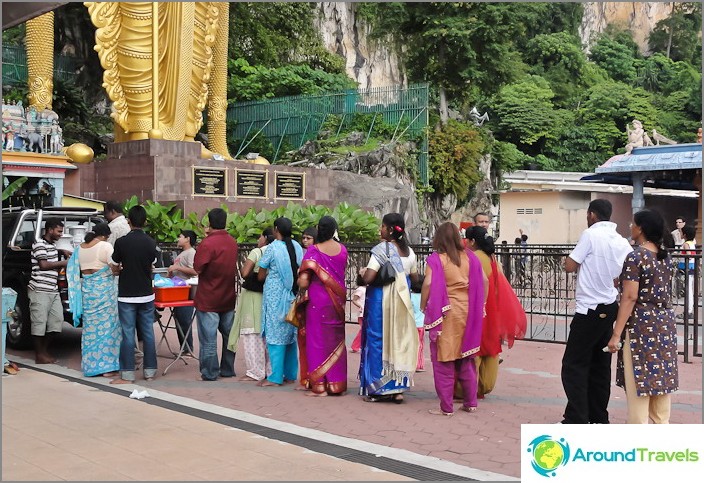 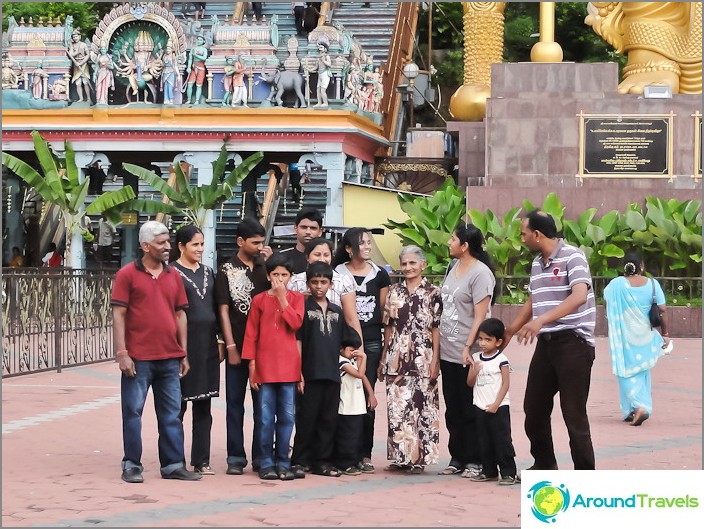 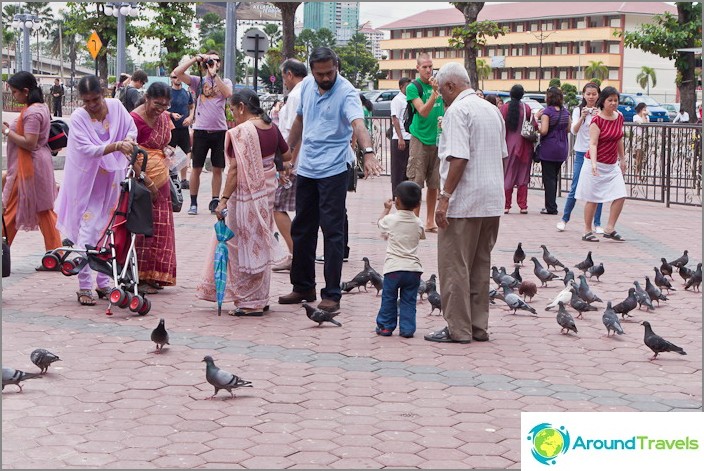 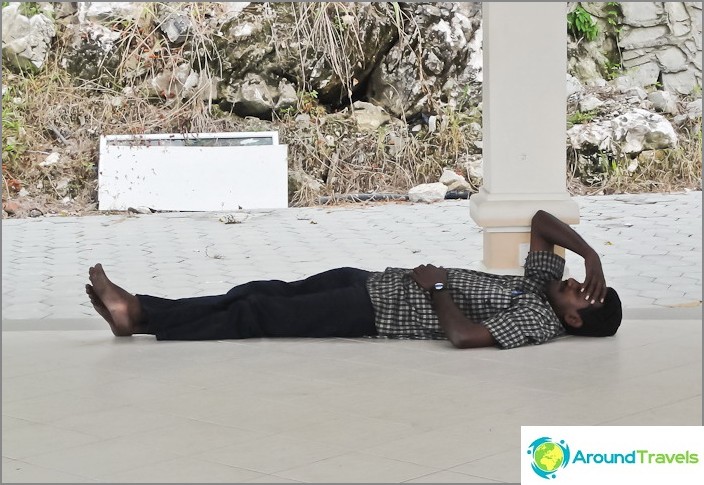 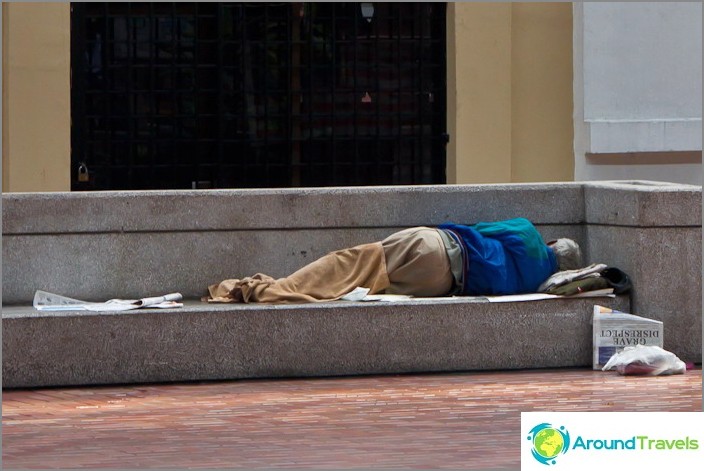 Someone comes to the caves of Batu sleep

Everywhere Indian music sounds, it’s worth a lot.a statue of some sacred blue monkey, and before entering the Batu Caves themselves - a huge 43-meter statue of the god Murug (by the way, this is the largest statue of this Hindu deity in the world). And all because this place is one of the most popular shrines of Hindus outside of India. Here in January, they say, the insane asylum takes place under the name of the Taipusy festival. Crowds of Hindus walk along a huge staircase of 272 steps, many of which hooks cling to their skin, to which are attached heavy metal frames - kavadi. Probably, this is very spectacular, albeit an amateur, but the people during this period there is a huge amount. 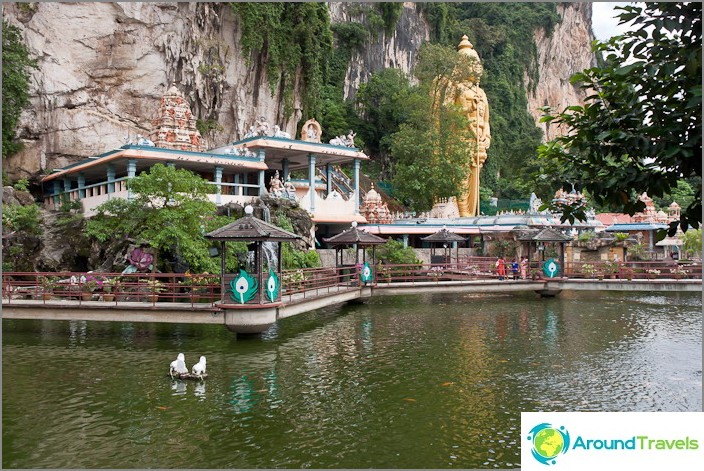 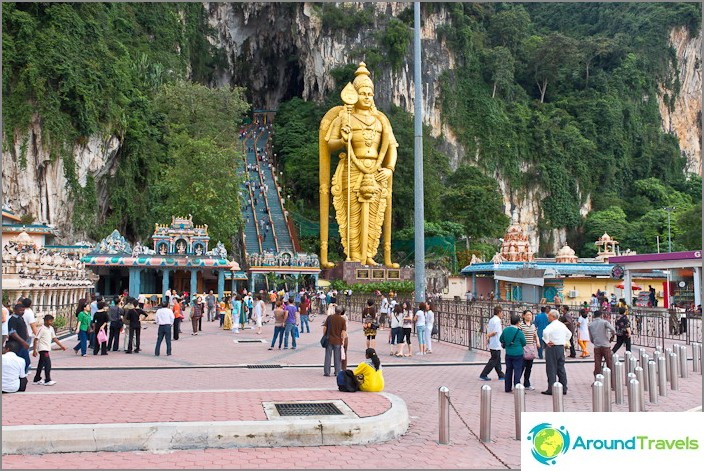 Batu Caves and the statue of the god Muruga

In general, we talked a little bit with monkeysat the entrance to the territory of the Batu Caves, headed for the stairs. Everywhere there are tents with real Hindu sweets, in which the prices bite a little (for 3 tiny pie cookies they ask for 4 RM, which is about 40 rubles). And still everywhere there are sellers of fresh coconuts, which are cut by the buyer, inserted into a tube and served like a glass. And next to the seller are rolling mountains of such "cups" already drunk. 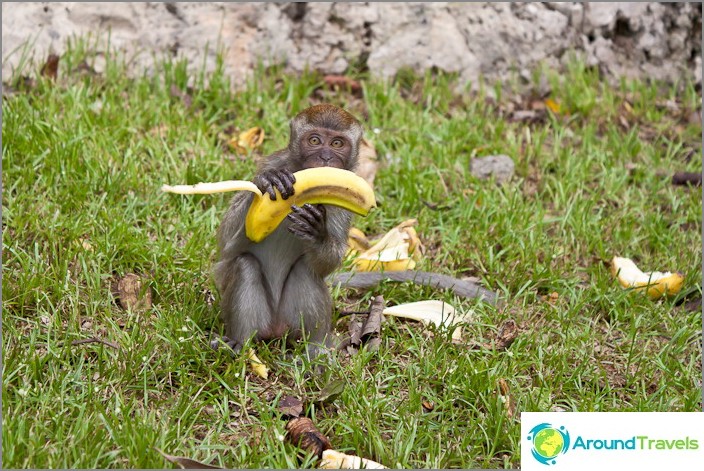 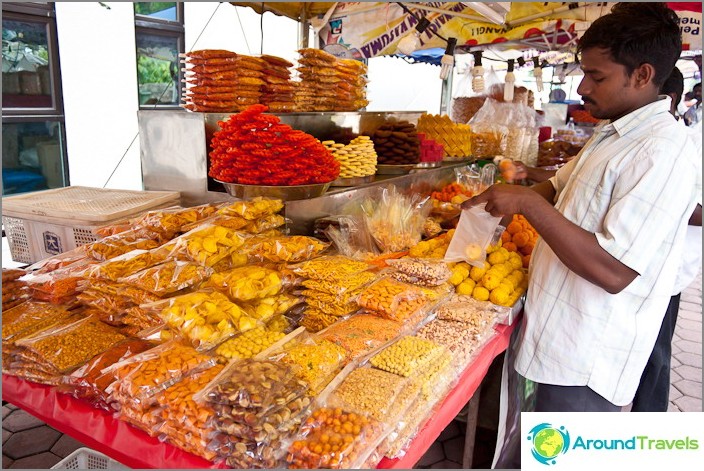 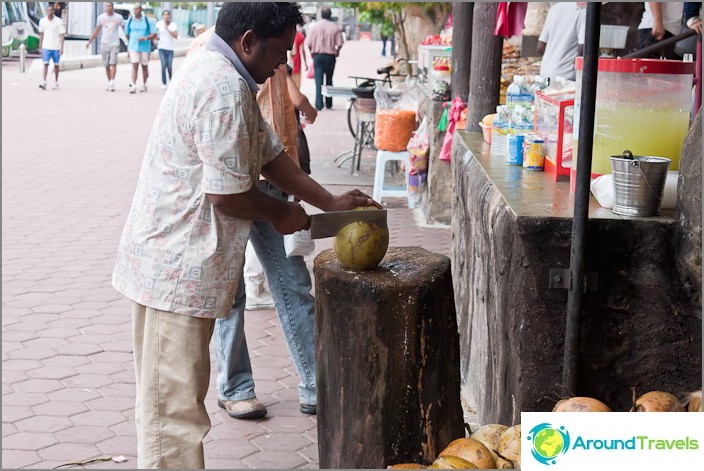 On the very staircase, we unexpectedly met our acquaintances, whom we met the day before, therefore, in conversations, the ascent of 272 steps went unnoticed.

Inside the cave is nothingspecial. In the corners there are statues of Hindu deities, tents with souvenirs, funny angry monkeys running around, who attack people, taking the food they brought with them. 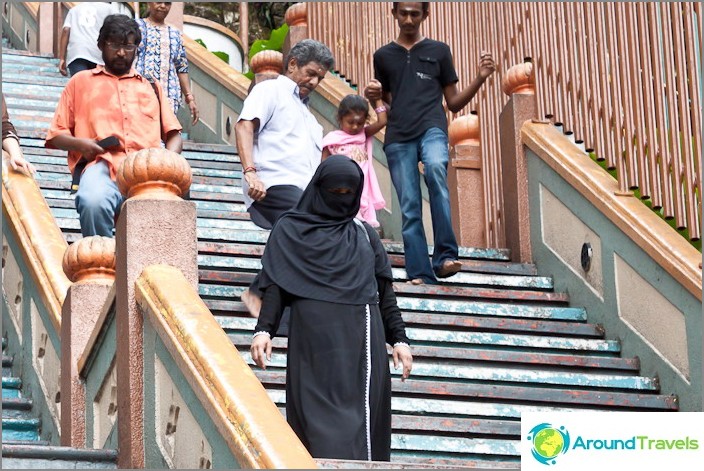 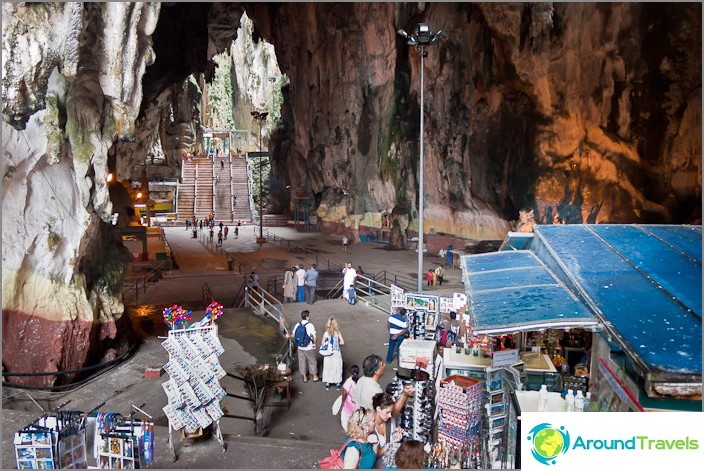 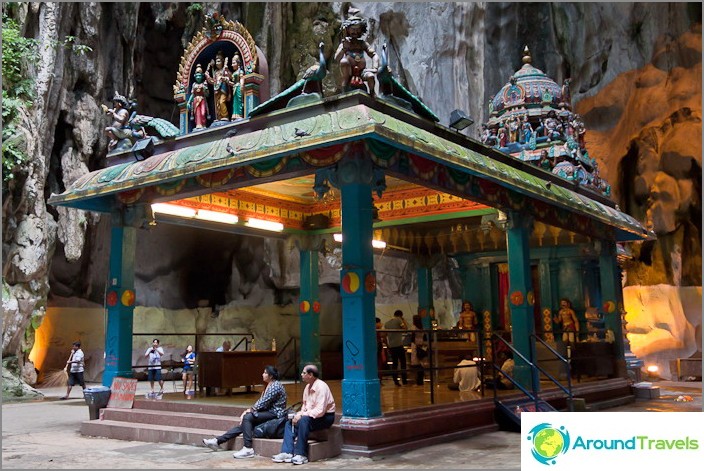 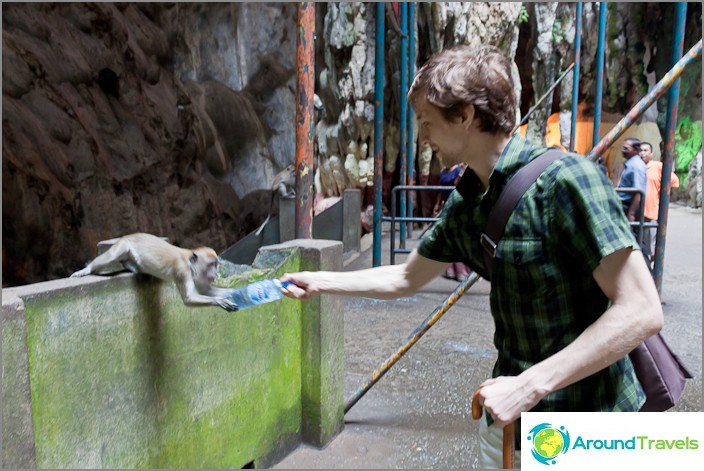 The man in this fight won! 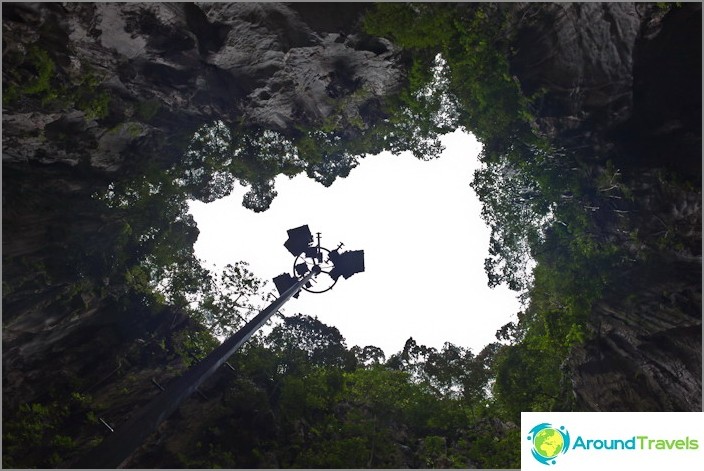 Batu Caves - a look up 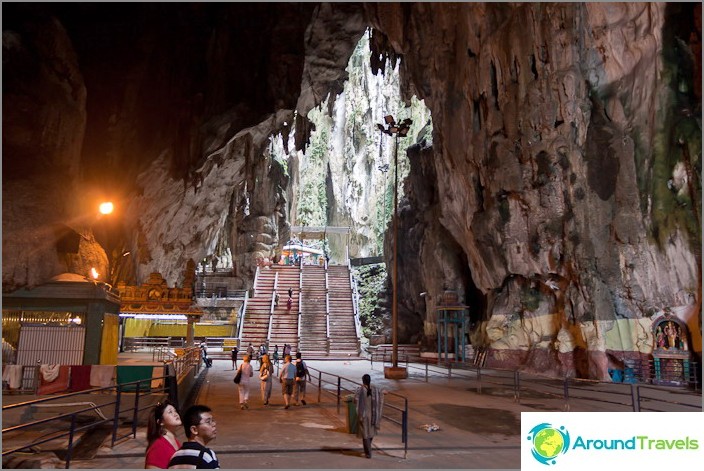 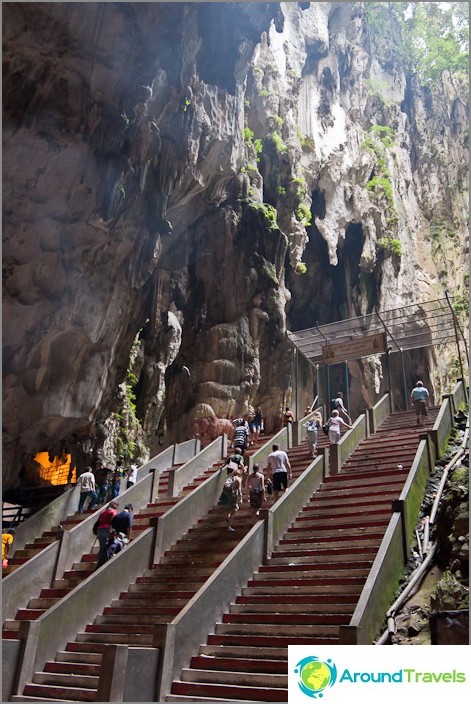 Inside the Batu Caves 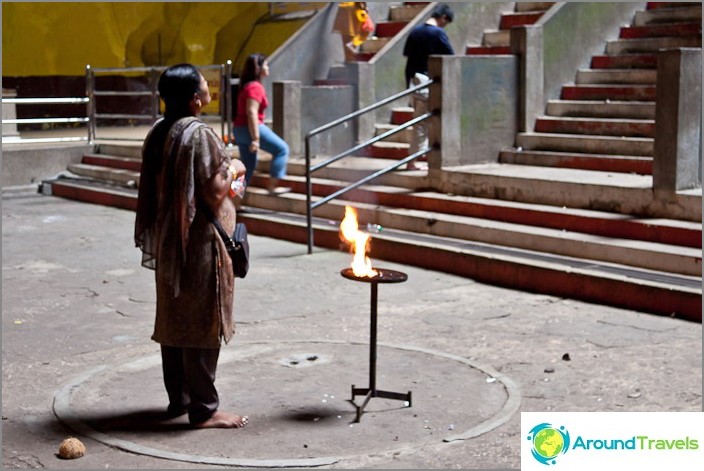 Not only tourists come to Batu Caves 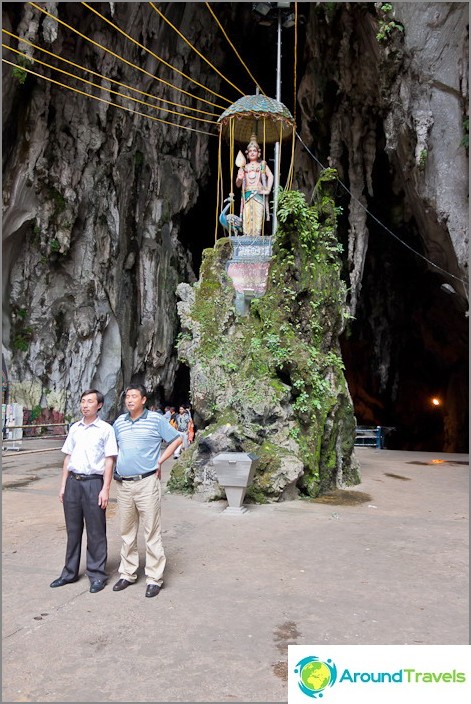 But still a lot of tourists 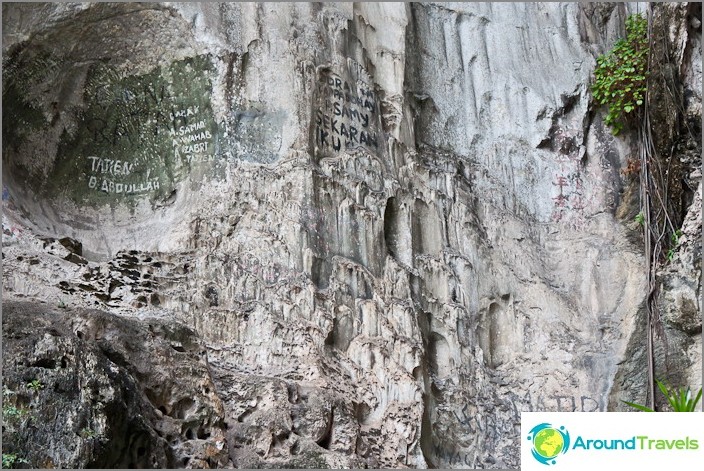 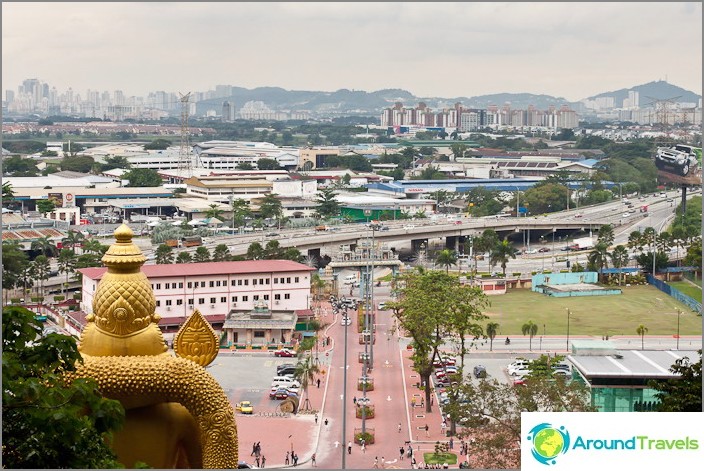 View from the main Batu Cave

During the descent back observed the same picturebrutal attacks of fearless monkeys on people rising peacefully and carrying with them in bags. And if you do not give them this coveted bag, hiss, grin, and you realize that with this pretty creature jokes are bad. 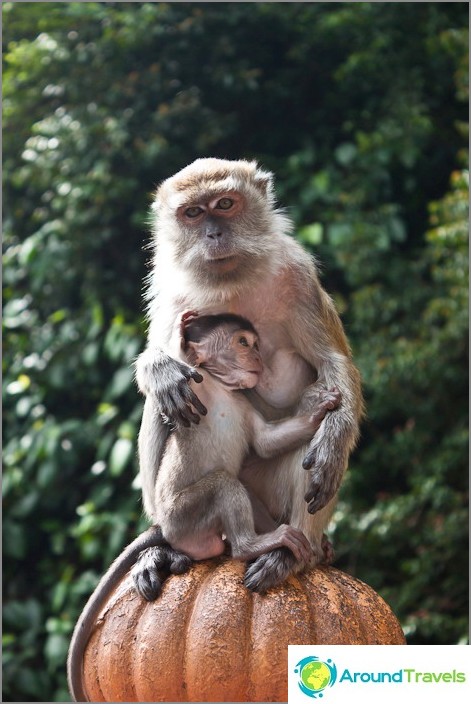 The touching picture of the stairs to the Batu Caves 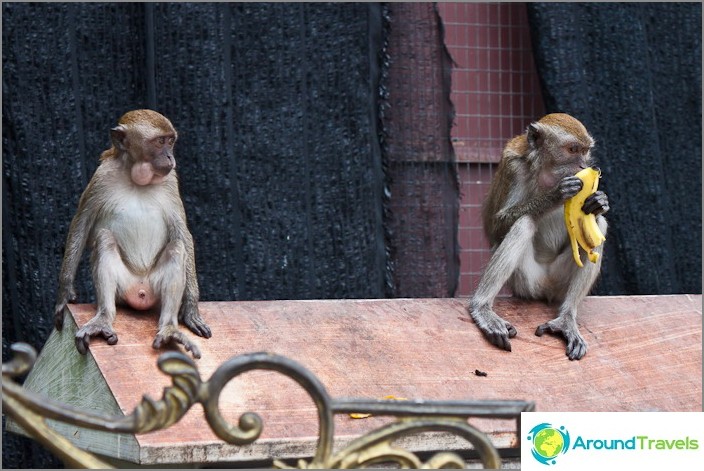 Pranks of the Batu Caves 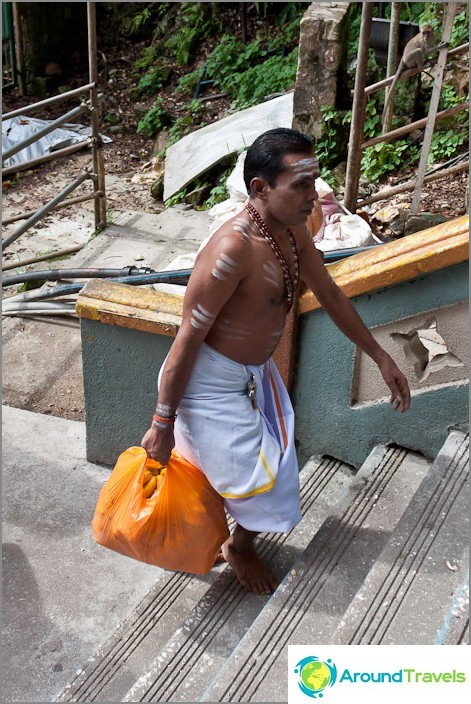 These bananas will obviously not be eaten by the gods. 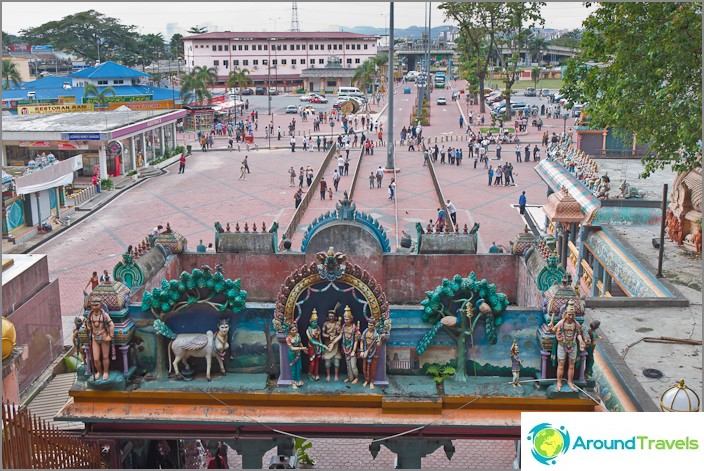 View from Batu Caves when descending

It was possible to visit two more caves there, but inOne of them (Dark Cave) needs special permission from the Malaysian Society for the Protection of Nature, and we simply did not know about the second, and therefore did not get there. 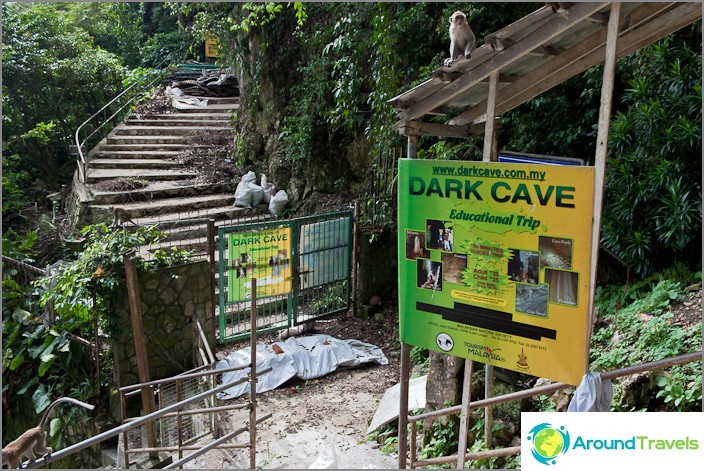 Before we left, we ate a very tasty vegetarian.Eating at one of the Hindu cafes. On a large palm (yes?) Sheet, a handful of recumbent rice and another three or four piles of different supplements, tasty but spicy, are served. And it is assumed that all this dish is desirable to eat with your hands, although the waiter prudently brought us the equipment, realizing that we are farangi and little that we understand in the culture of eating. 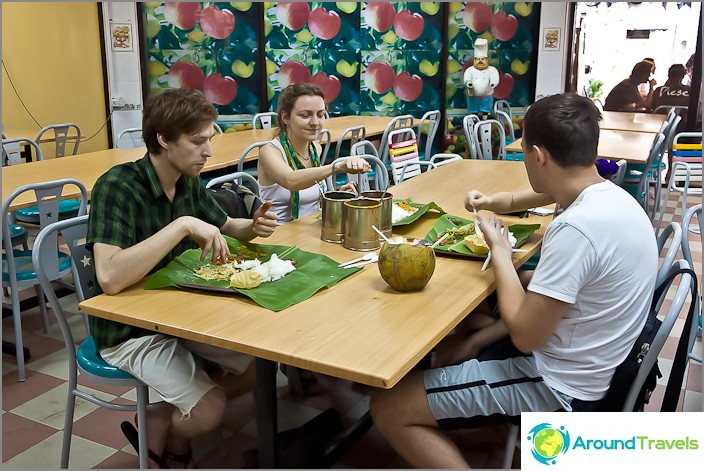 Now, oddly enough, recalling the Batu Caves, I understand that the brightest and shameless monkeys left me the most vivid impression, although, of course, this place is both beautiful and significant.