Long Beach beach in English means "long beach", although why it is long - I did not understand. Tonsai and Lo dalam much longer even visually. Long Beach is located on the inhabited island - Phi Phi Don (Phi Phi Lei is considered uninhabited).

There is a beach in the south of the island and is,probably the closest beach to Phi Phi Town, where you can swim normally and fully. The only difference between it and the rest of the beaches, in my opinion, is directness. Long Beach is the only one who does not have an elegant curve of the coastline - it is straight, like a stick. Beautiful, quiet, but quite ordinary tourist beach, without highlight.

Plain tourist beach. The length of Long Beach is about 650 meters, the width of a strip of sand varies from 10 to 25 meters, on average. The sand is soft, medium grain, not flour, but still very pleasant. When it dries, it becomes a light yellow shade, but not white.

Approximately in the center of the beach is constantly parkedmany boats that gradually reel in the afternoon. They also stand in other parts of Long Beach, and it seems that the paling of boats and cobwebs from their mooring lines is a common problem for all the beaches on Phi Phi Islands.

Opposite some resorts with ropes and floats, the water area of ​​the beach is fenced off, where boatmen cannot swim. It seems to be taking care of the guests, but it looks somehow sad.

The slope of the coast in this part of Phi Phi Don is perceptibly steep, so that the earth goes under water at such an angle that the depth increases in the tide quickly, after 5 meters it will be along the neck.

At low tide, I did not see this beach, but I assume that, like all the beaches on Phi Phi Don island, it becomes less waterable, but not so much that it does not go into the sea at all.

Because of the depth of the waves occur here, soplaces on Long Beach built stone breakwaters (there is a photo at the end of the post), which slightly spoil the overall aesthetics of the beach. The bottom is clear but uneven: opposite Phi Phi Paradise Pearl Resort

stones under water very close to the shore.

Many hotels have their own sunbeds, and only for their own - this is advertised on the beach. But in some hotels you can rent a sunbed for 100 baht.

The shore is teeming with vegetation, but naturalthe shadow disappears in the afternoon and there are literally a couple of places on the public beach where you can hide under the trees if you are not a guest of one of the resorts.

Resorts have their own forest plantations, but strangers therenot even allowed for money. In general, Long Beach is a purely resort town, with a host of beach amenities and pleasures that are mostly available to guests who reside here. 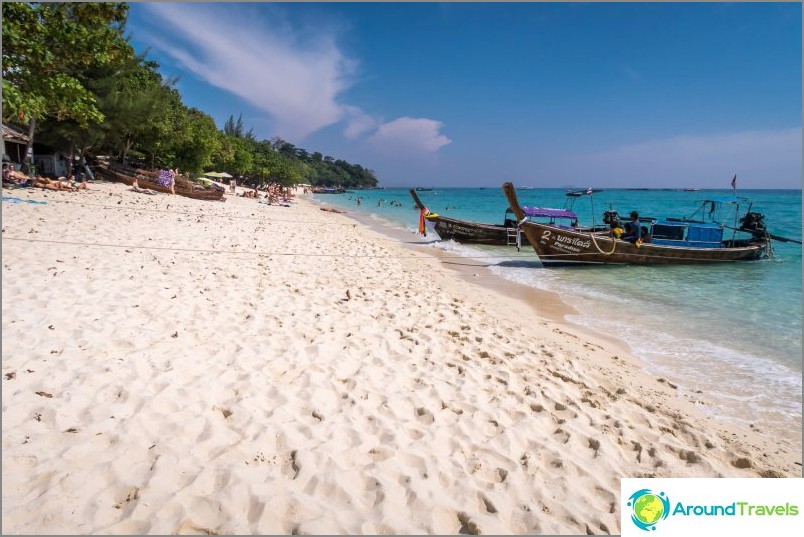 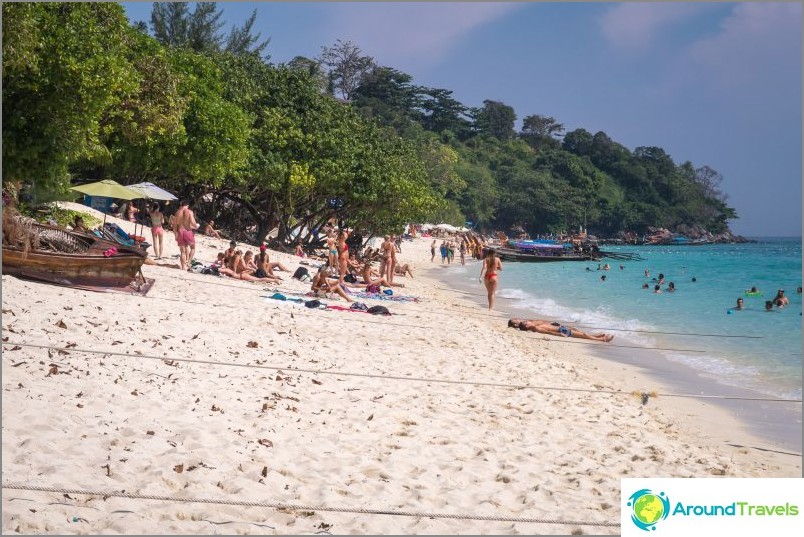 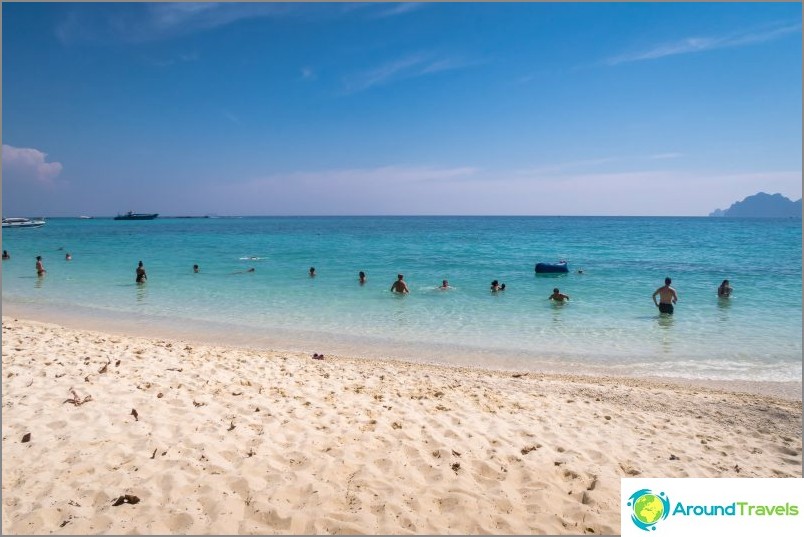 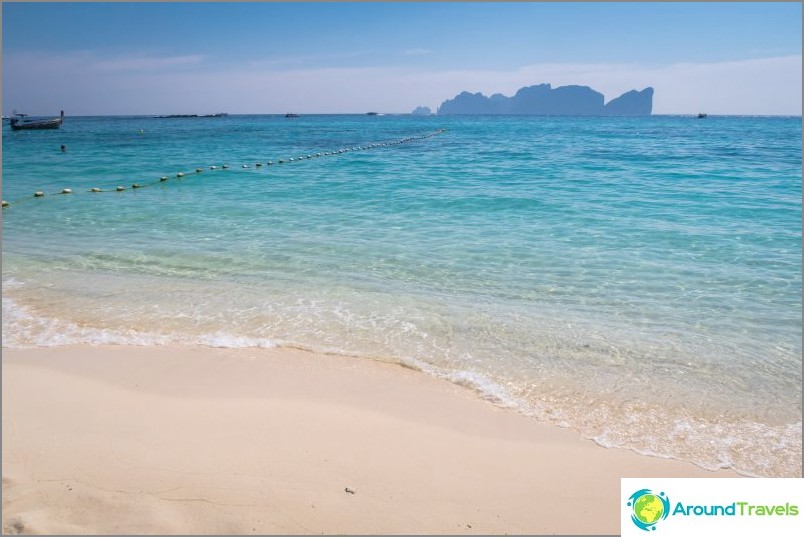 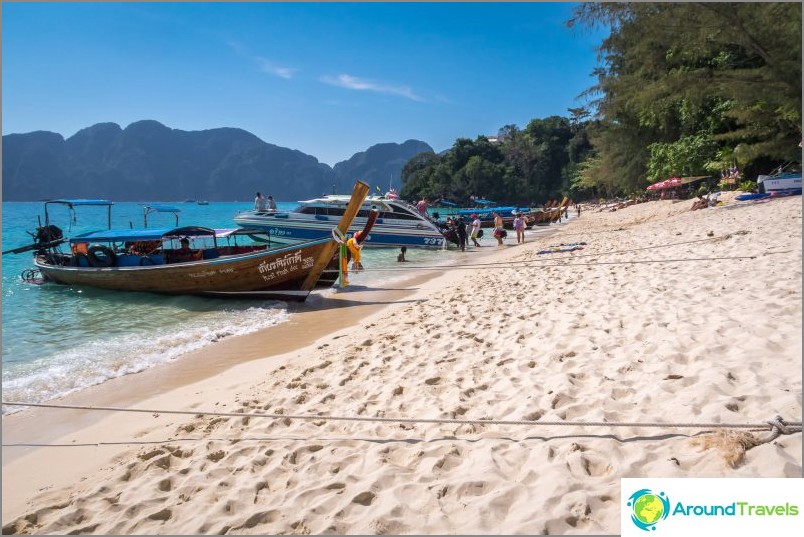 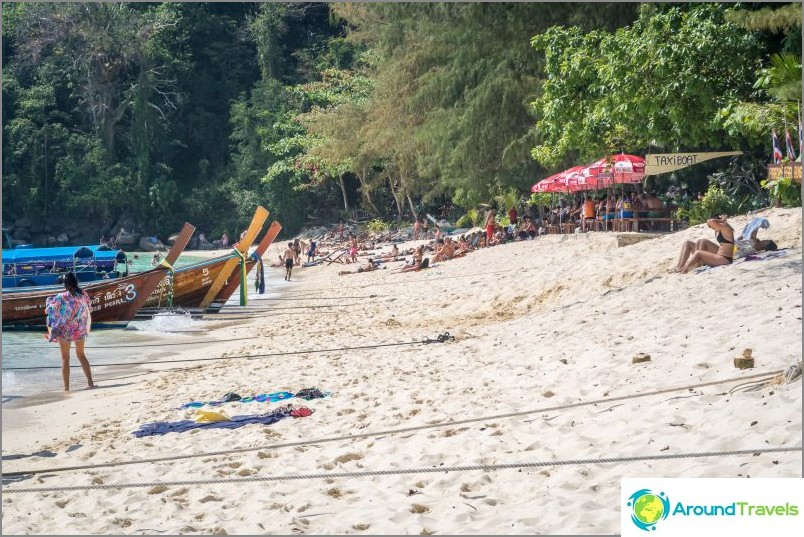 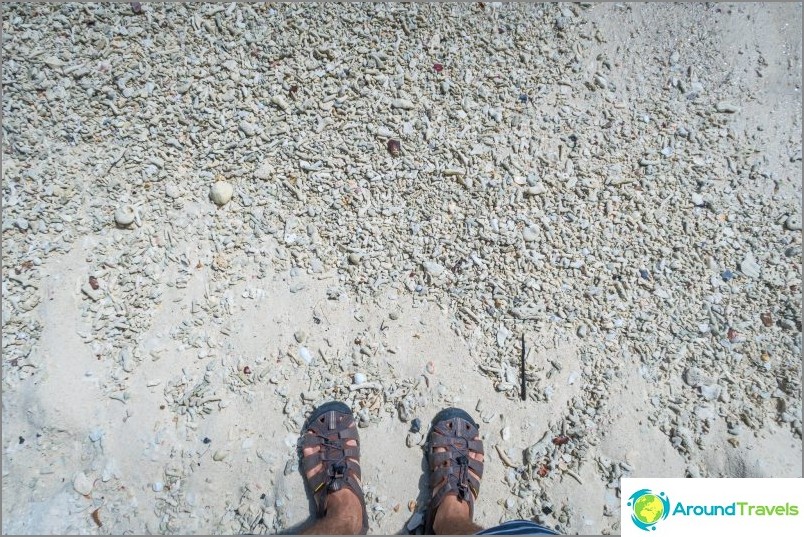 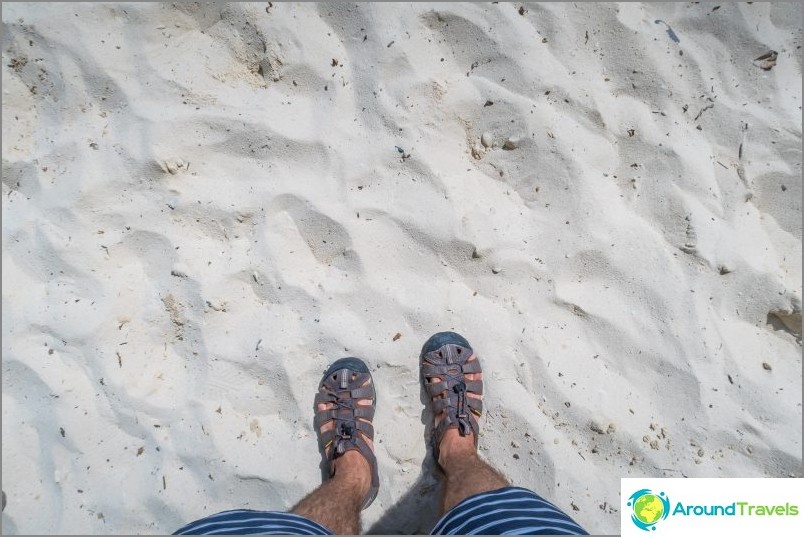 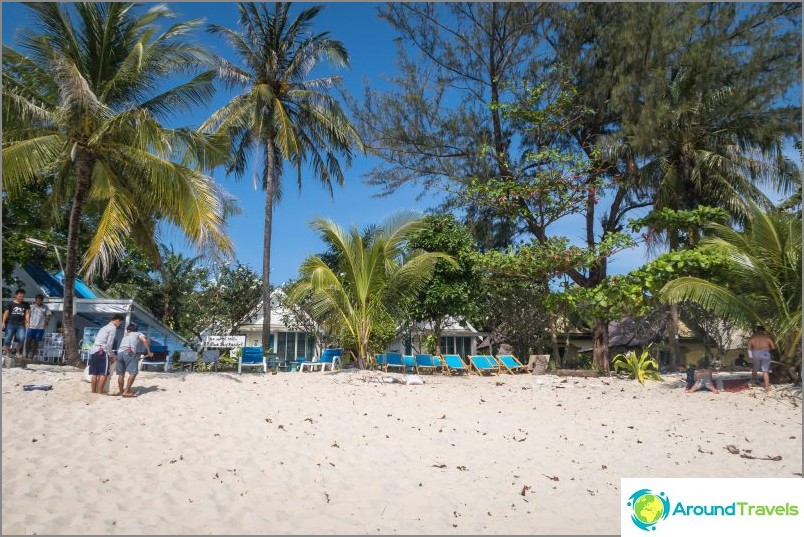 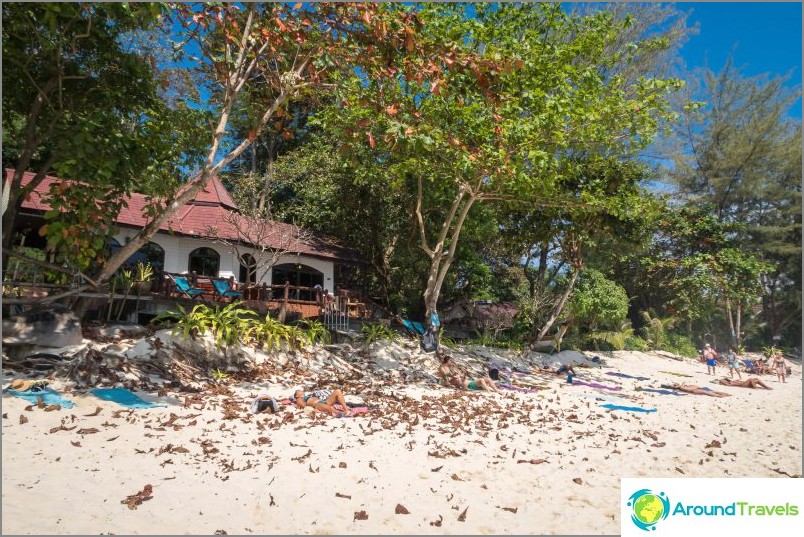 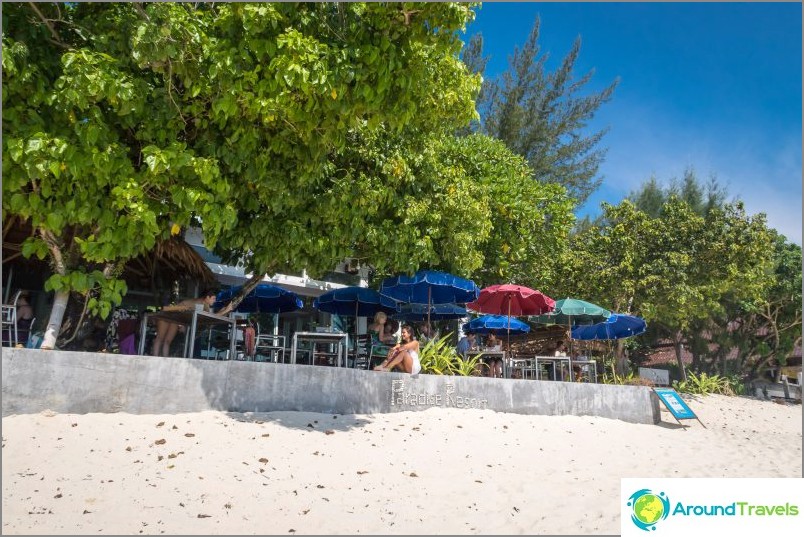 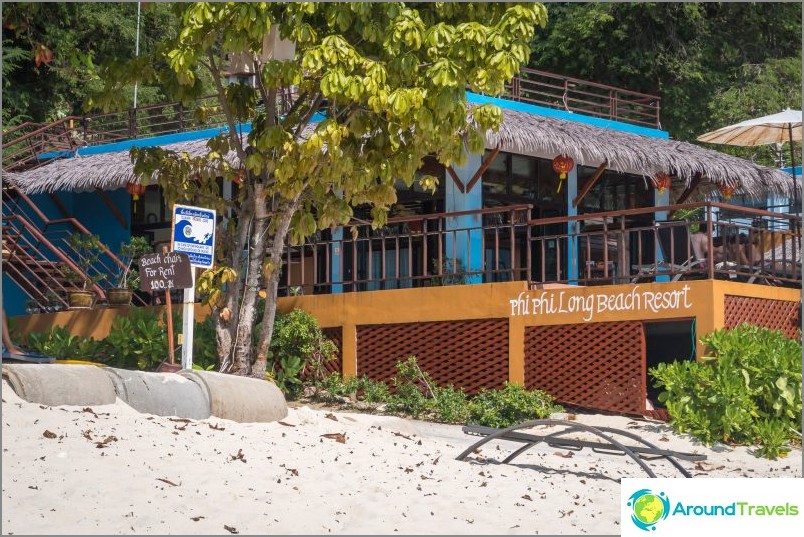 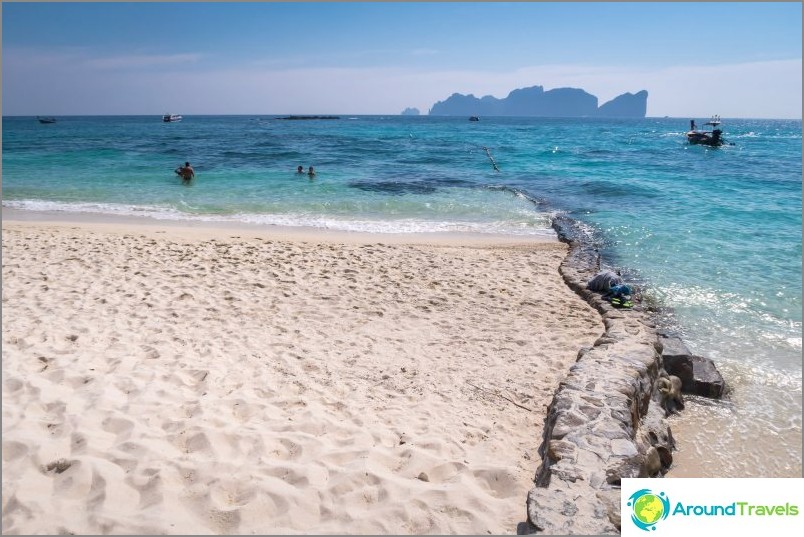 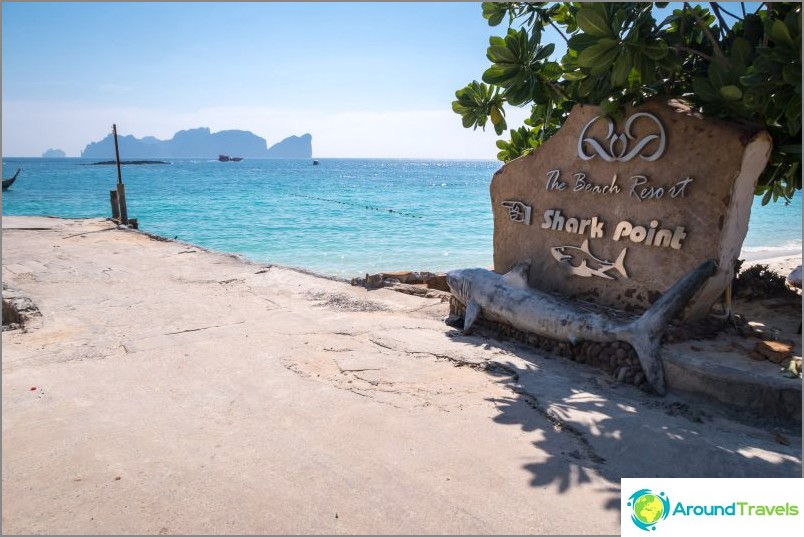 People who stop here, purposefullygive priority to beach holidays, while always having the opportunity to get to the more lively places of the island because the boats ply constantly. Also, I understand that some hotels have their own taxi boats.

In addition to hotels and cafes restaurants from resorts herenothing else. Instead of the second line here is a forest and jungle. As I understand it, everyone here is walking along the shore. You can also go on the road through the mountainous part of the island, but the path will be longer and more athletic.

Near the beach, about a hundred meters from the coast is Shark Point - a reef where you can watch sharks. I do not know how often sharks appear there, but boats bring people there regularly. 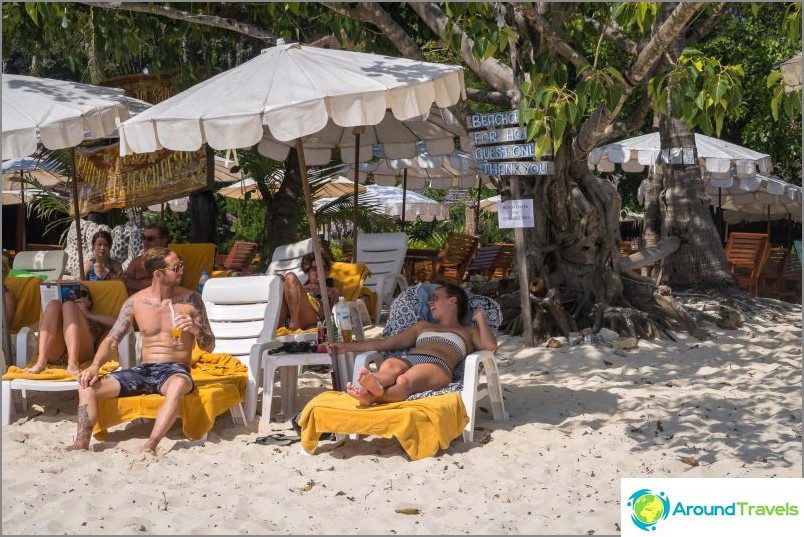 The entire first line of Long Beach is occupied by resorts of differentprice category and stars. On Long Beach, many tourists stop for a long time, only occasionally getting out on a boat to Phi Phi Town or on a tour of the islands around. There are no private houses for rent here, as well as on the rest of Phi Phi Don.

Hotels, according to visitors, on average haveThe rating is higher than on the same Tonsae or Lo Dalame. Of the most popular and top-rated hotels on Long Beach, I would recommend paying attention to Phi Phi The Beach Resort

. The second is even more preferable because opposite it is the best part of the beach with a clean bottom.

Under the link below, you will be transferred to the general list.hotels on Phi Phi Don, but you click on the icon with the map and there already decide on accommodation options on Long Beach. The island is so small that Roomguru does not even try to share hotels along the beaches.

On foot from Phi Phi Town, go about 30 minutes, and to get on the boat - about five minutes. If you live in Phi Phi Town near the Phi Phi Andaman Resort

, then go from him for about 20 minutes.

First, you walk along the street along the coast, passing the resort, cafe, then you will need to go through a small piece of the beach, after which you will be rested at Arayaburi Resort

, and from it will go the concrete path, which soon will go into the path through the jungle.

You will climb, descend, climbthrough the roots, on the way you will meet a couple of small beaches of about ten meters, then you will pass Viking Beach, which is so called thanks to the eponymous resort. Although the resort - it says loudly.

In fact, this is a bungalow complex, but it looks verynice and authentic, everything is wooden, carved figures, well, and the beach is also good, except that there is no way to go there on foot every day. Almost immediately after the Viking Resort you will be taken to Long Beach. The cost of the boat one way from Tong Sai Pier is 100 baht.