Bicycle rental in Sochi is a hot topic for peoplewho do not have the opportunity or simply do not want to rent a car for the holidays. Given the situation with traffic jams and parking lots in Sochi and its districts (especially during peak season), I only welcome the supporters of healthy lifestyles and gladly contribute my five kopecks to the general knowledge base of Runet. So, bike rental K2Tour. For those who settled in Adler, it may not become a priority rental point, except for those living nearby. But for a tourist who has found a home in Krasnaya Polyana and intends to periodically go to the sea and move more or less freely around Adler - Kay Tu Tour will become a lifesaver. Why? This is the closest to Railway station Adler rental point.

15 minutes brisk walk on sidewalks and passagesAdler outskirts, and you find yourself on one of the quiet streets, where there is a high-rise hotel, a dining room (by the way with very democratic prices) and rows of private houses. On the first floor of the LENSiS hotel, the K2Tour bicycle rental was located. By the way, they are engaged in renting not only bicycles and roller skates, but also hiking and hiking equipment. In my case, it was communication on bicycles - I had six hours to ride Adler, from the old district to the border with Abkhazia along the new embankment and local sights.

Before entering the rental, I briefly inspected the bike parkon the street and noticed a pen of "stealth" and carefully covered under the stairs "Merida". Several sizes of frames, most bicycles are mountainous, others are road builders, and for some reason did not see one or two suspension brackets. Although there the bikes were very close to each other to save space, so the middle of the pen was not very visible. Immediately decided that taking Stels for six hours is a mockery of the knees, and Merida most likely will not be cheap - that’s what happened.

The rental issue was resolved in just five minutes,a passport and a thousand rubles were left as collateral (it was possible to leave the rights), a contract was issued and verbally the guys told me about the nuances of cycling along Adler. According to the Thai habit, I looked great with a camera in my hands, filmed it in a circle, made a test rollout, quickly adjusted the height of the saddle and waved the rental handle. The state of the apparatus was quite decent, but obviously the bike was not idle. A technical - generally perfect, for six hours pokatushek I never cursed at the distributors. 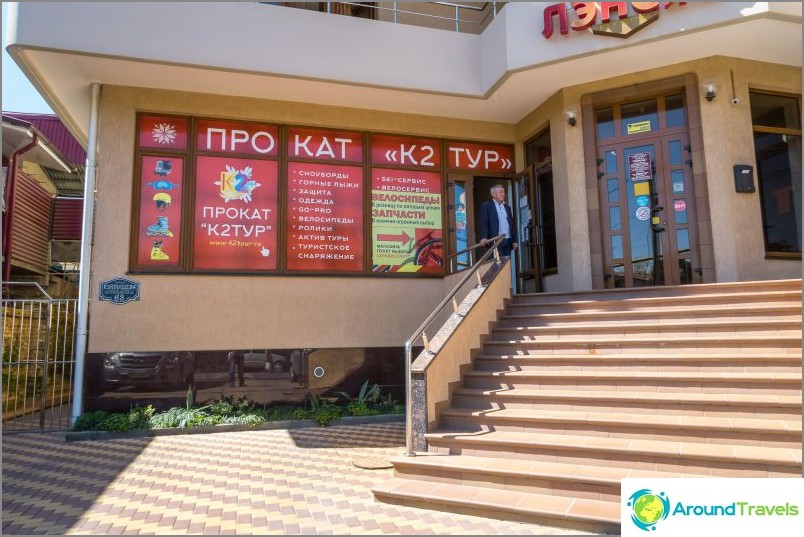 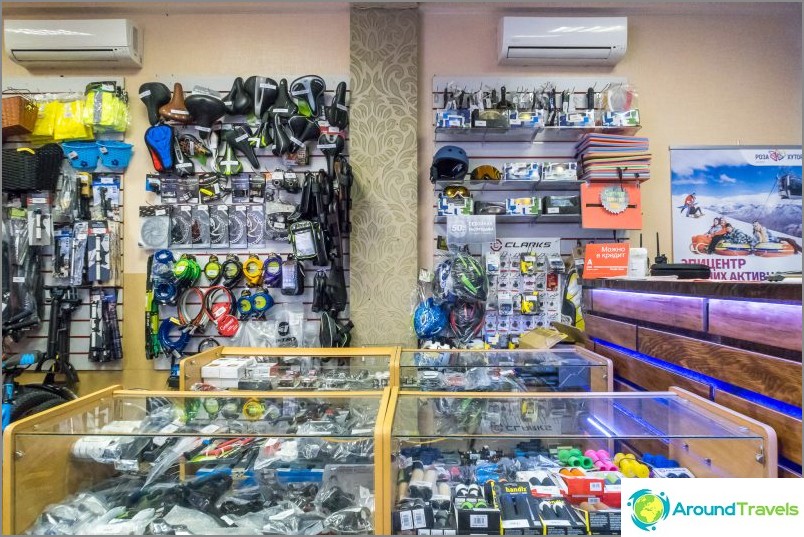 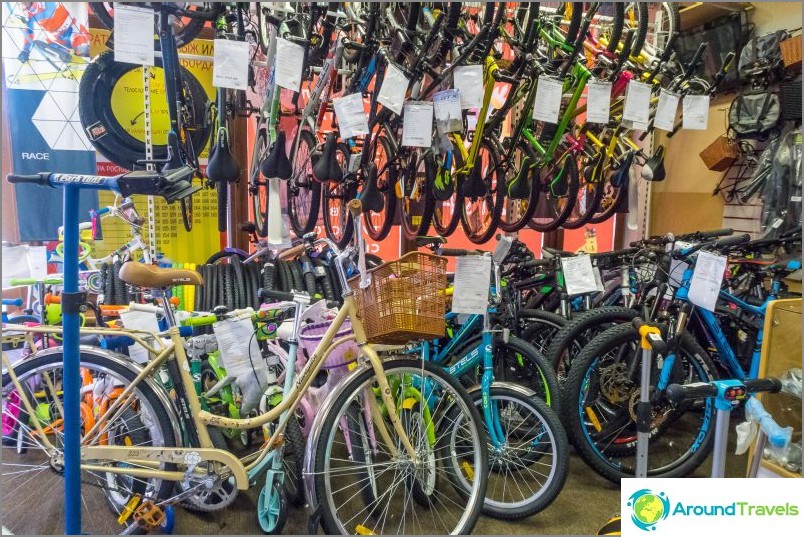 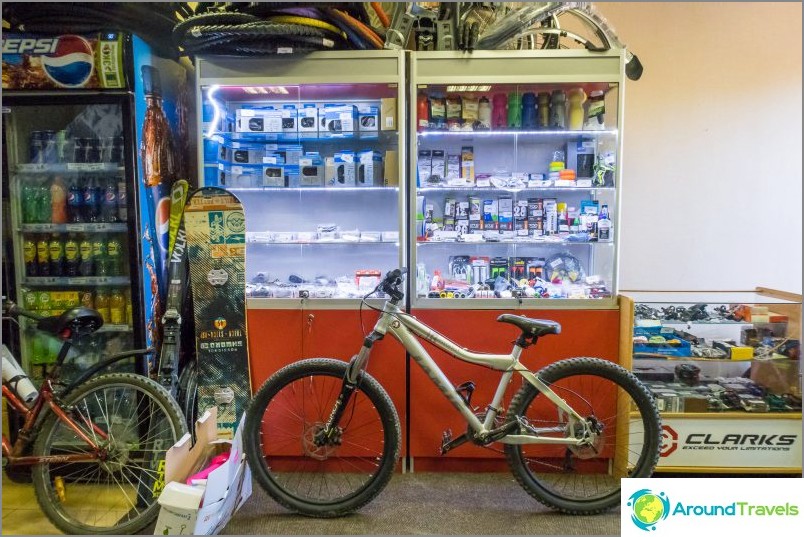 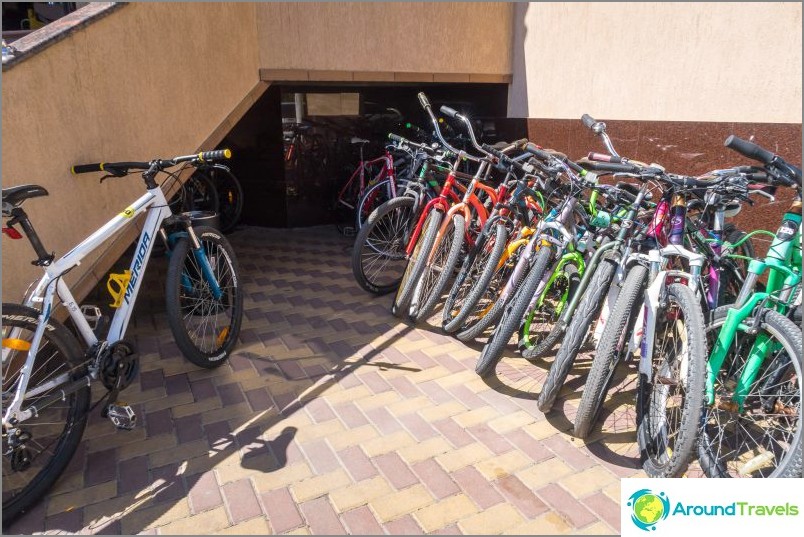 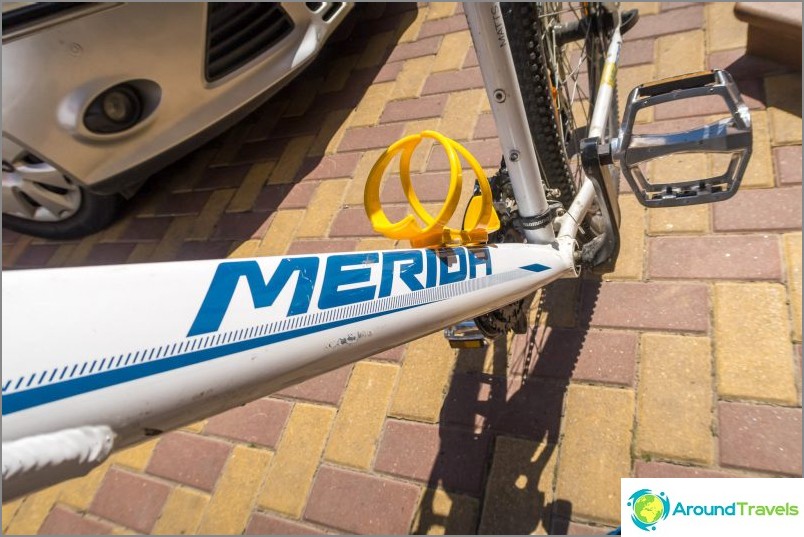 Rental runs from Monday to Thursday from 7 am to 8 pm, and on Friday, Saturday and Sunday - until 12 am.

On demand give anti-theft and flashlight. After settlement at the end of the lease term, they issue their plastic customer card, which further gives you bonuses at this rental.

They are open on Adler’s central waterfront.additional rental with the same prices. If you want and have extra money, in K2Tour you can buy your own bike and all the pribluda you need for it.

Cooperative Square - when the cherry blossoms in ...