Budget Hotel in the heart of Chaweng - Chaweng Park Place

After the old Chaweng ResortI moved to a more budget place andaway from the sea. In general, also a good hotel, mainly due to its location. In the heart of Chaweng, just around the corner. The hotel was a bit old, but for that kind of money it was quite good.

I had the simplest Superior Room (Superior) for 975 baht. The deluxe was already for 1716 baht, that is, almost 2 times more expensive.

(where I was before) or somewhere on the first line,but budget travelers just can stay in Superior. In terms of price and quality is very even! During the year, the price does not change much, but it is a bit more expensive on some dates.

The checkout is standard at 12. I asked for another hour and gave me without any problems.

Rating 7.8 and 2 stars. In my opinion, somewhere it is, and the rating, and the stars. If you do not need a resort near the coastline and you save, the place is good. And located quite well, close to everything.

The rooms are obviously tired, at least Superirors. Shabby furniture, and the sofa is generally dirty, you should put some kind of cover or cover on it, since the owner chose to buy fabric, not leather. But on the whole, I would not say that everything is so old, it was even worse, so there is even less.

In general, whenever you evaluate a hotel, you needkeep the price in your head. For me, for 1000 baht on the most expensive beach of Samui is silly to ask for something more. Or be ready to live somewhere on the outskirts, from where only on a bike you can get somewhere.

The size of the room is quite large, closely not exactlywill be. Still, the hotel is positioning itself as an apartment. But in the apartments there is usually a kitchen, but here they are limited to just a sink, no tiles. However, if you live a long time, then you can buy. But I'm not sure that this is allowed by the rules, often a ban on cooking.

However, there is a microwave and kettle,In principle, something can already be cooked or at least warmed up. And the minimum set of dishes is present: a pair of cups, a pair of plates, spoons and forks. Further, from the equipment - a refrigerator of normal size and antediluvian TV, which I put in a corner so as not to interfere and free myself a table under the laptop.

The bathroom is small, hot water, everything is as it should be. Soap supplies also put. 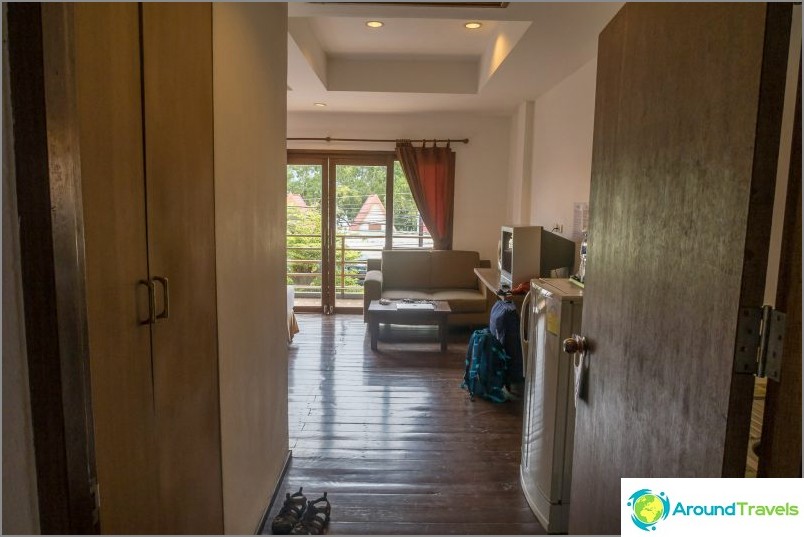 My superior room in Chaweng Park 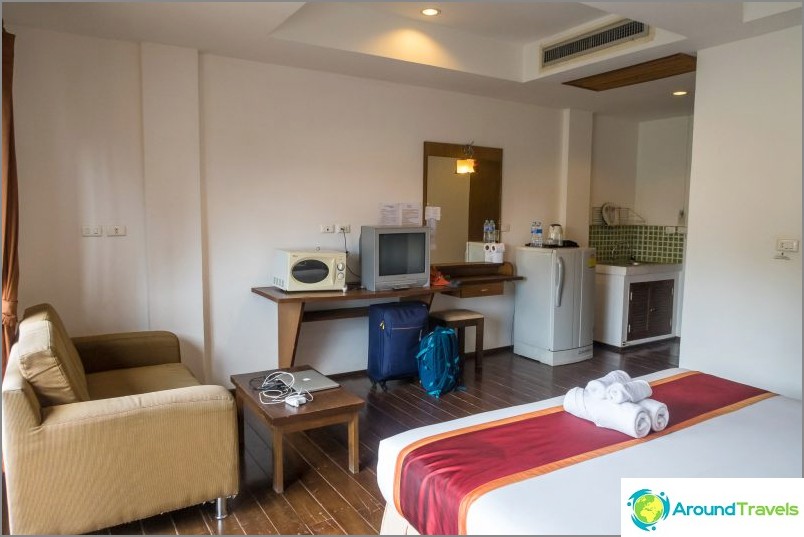 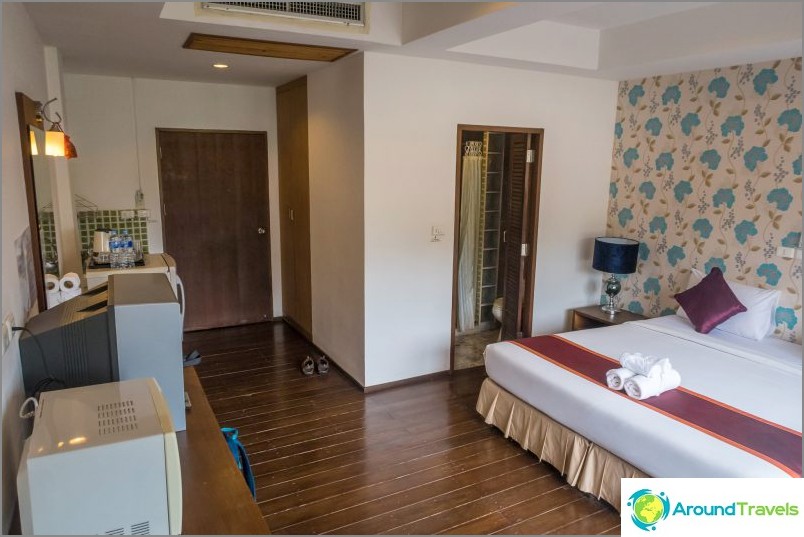 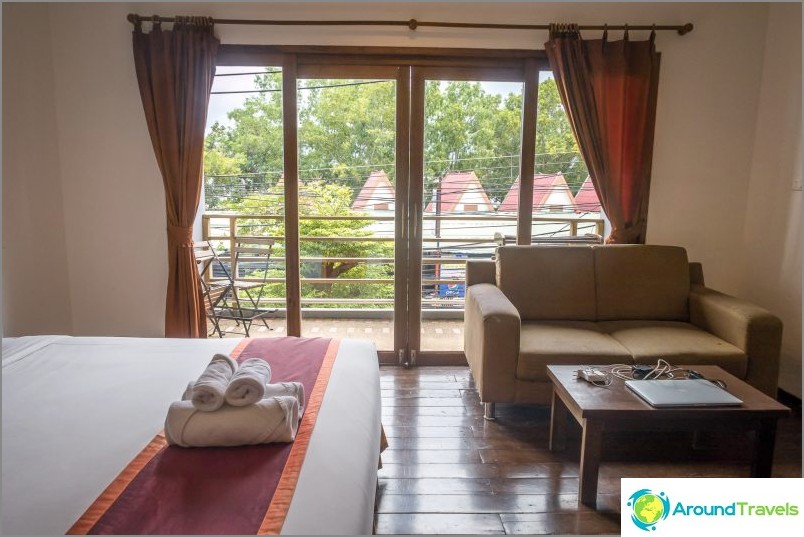 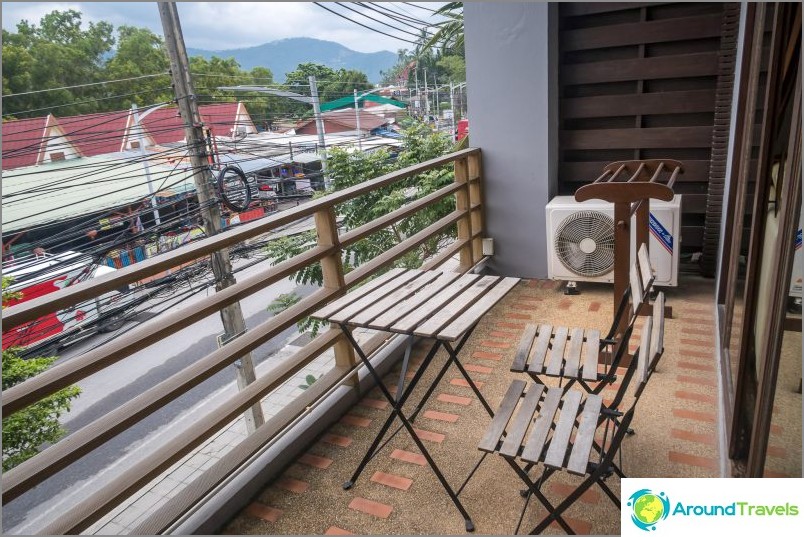 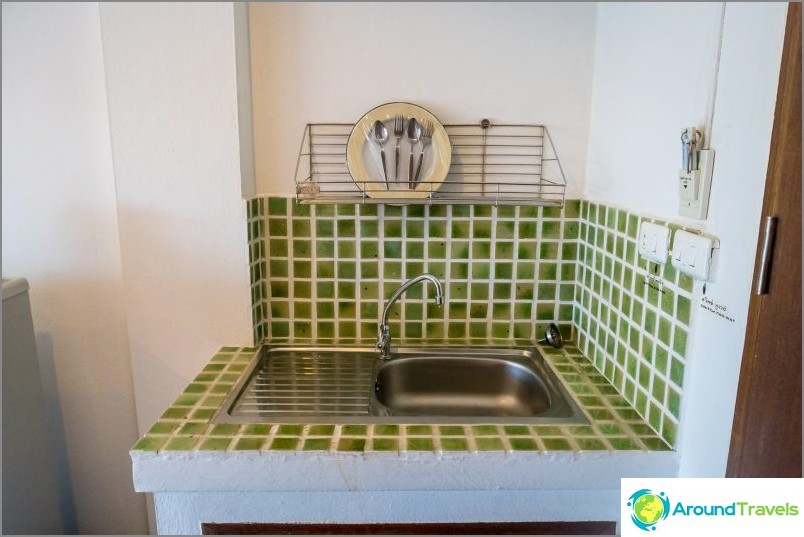 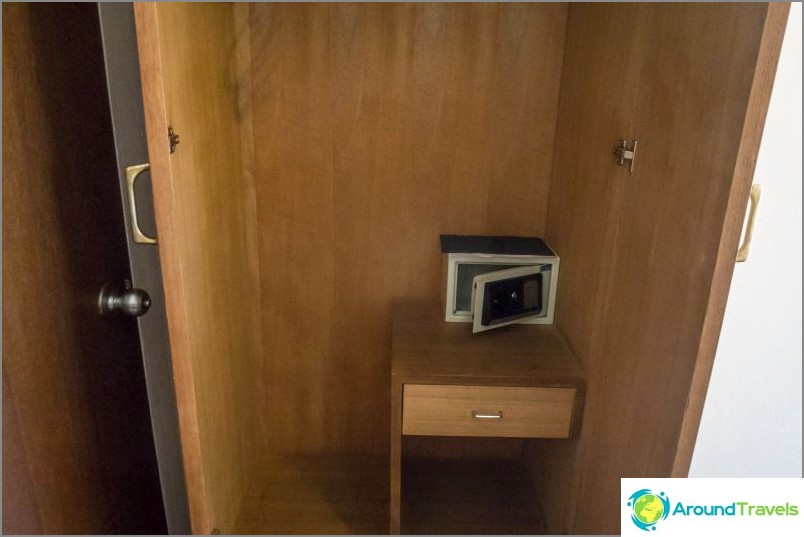 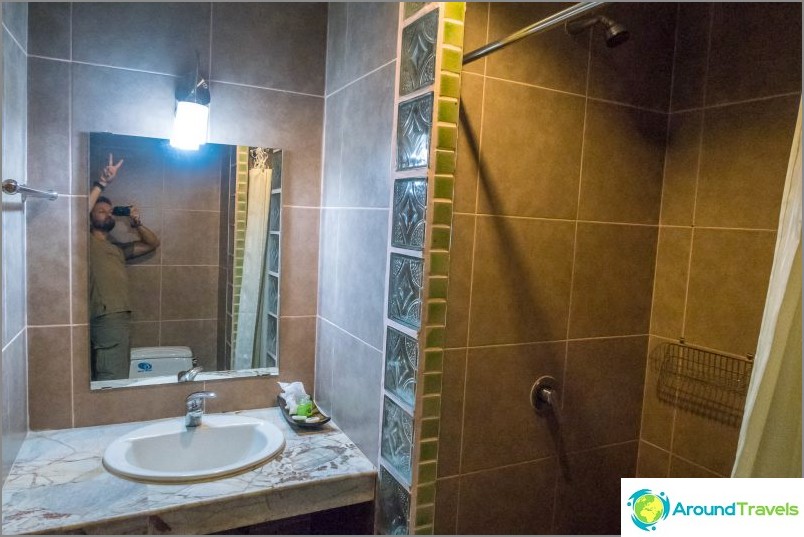 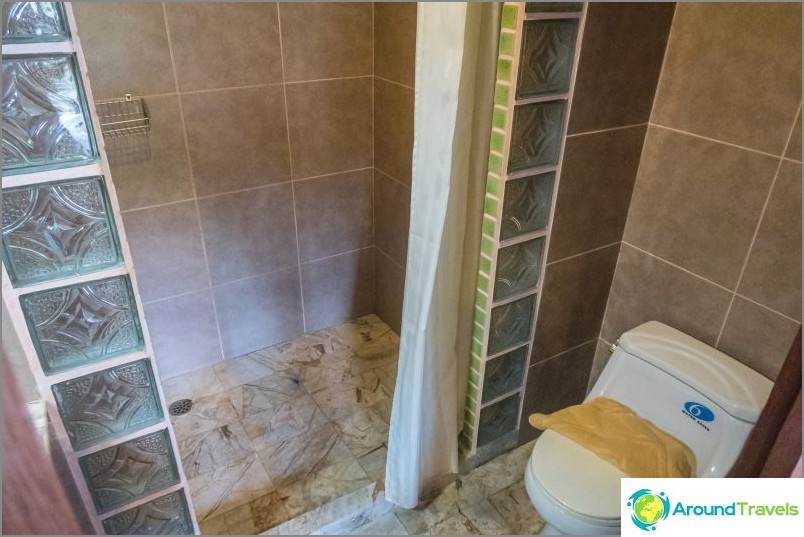 Of the benefits you can still note the wooden floor. But this is for those who do not like tile, because wood is found in Thai hotels very rarely. Of the minuses block air conditioning on the balcony. This is not unusual, they are often put on the balconies, but in my room he rattled heavily (apparently badly screwed), which made it too noisy at night.

I do not know how in other rooms, maybe thereNormally installed blocks. Although the windows of my room still went straight to the street, but it was lively, so all the same, the noise could not have been avoided. If possible, ask for rooms with a view of the garden, not the road.

The Internet here is different. About 6 access points. You can not connect to all, as they are scattered around the hotel. After all, there is not only a building, but also a series of bungalows in the backyard yard. So I had 2 points available, and one wifi was dead, the second was quite good for myself, I uploaded all my photos to the cloud without any problems. 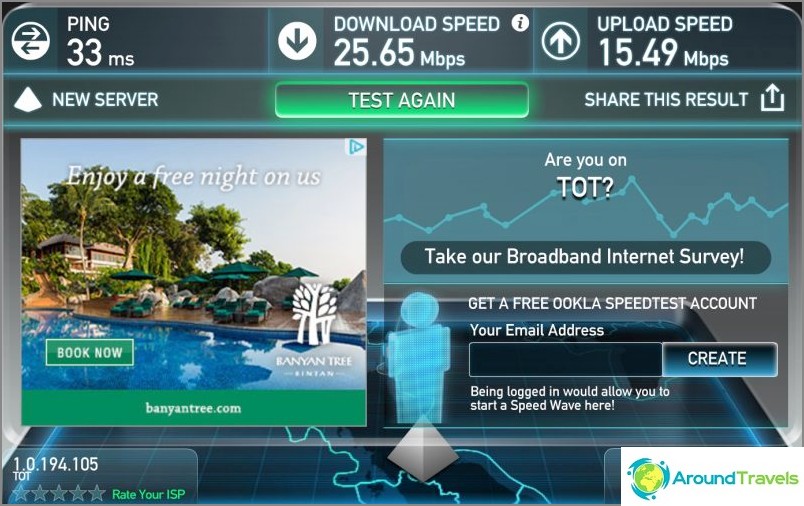 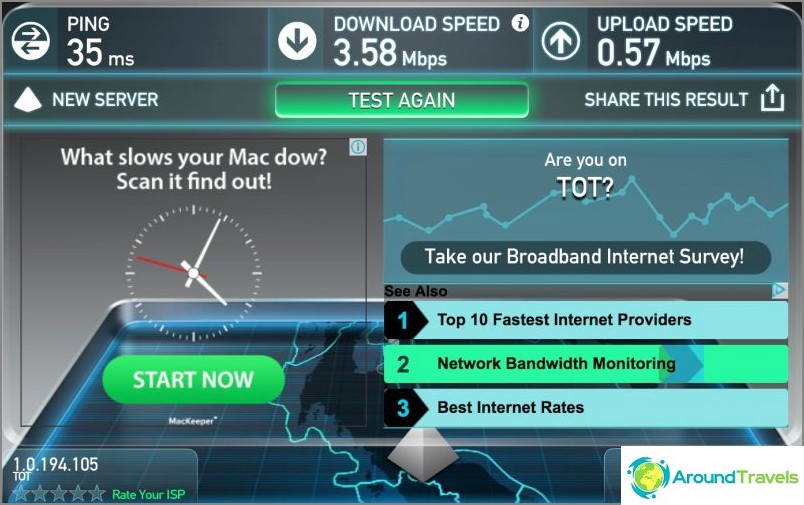 The territory of the hotel is minimal. Only the path to the bungalows with a pool and a playground with a bar near the pool. The pool itself is medium in size, you can swim. Considering that you need to walk 10-15 minutes to the sea, no less (through the Central Festival), the pool is good. 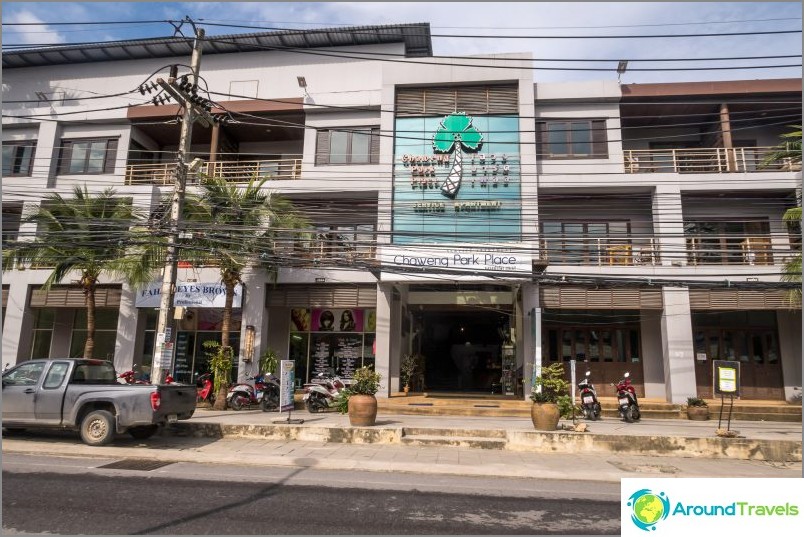 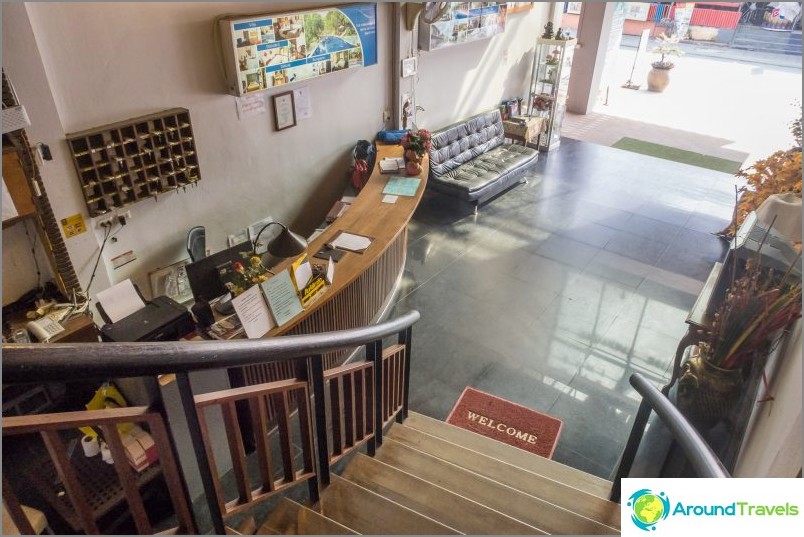 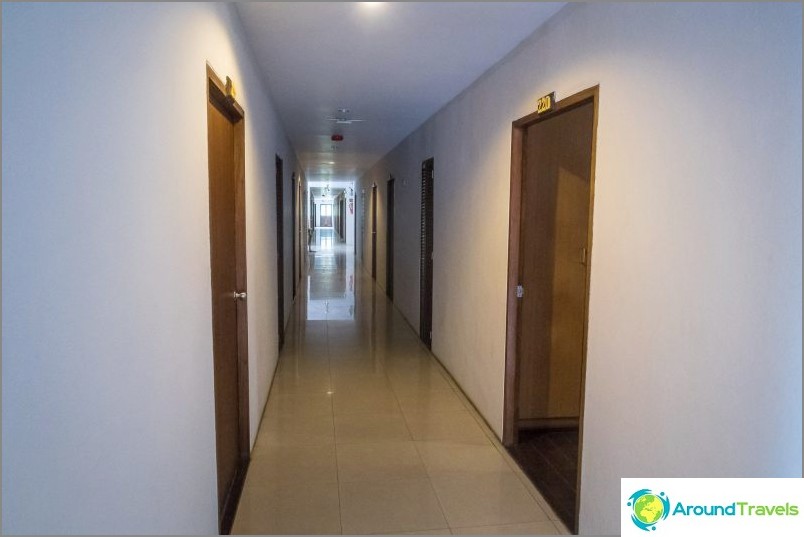 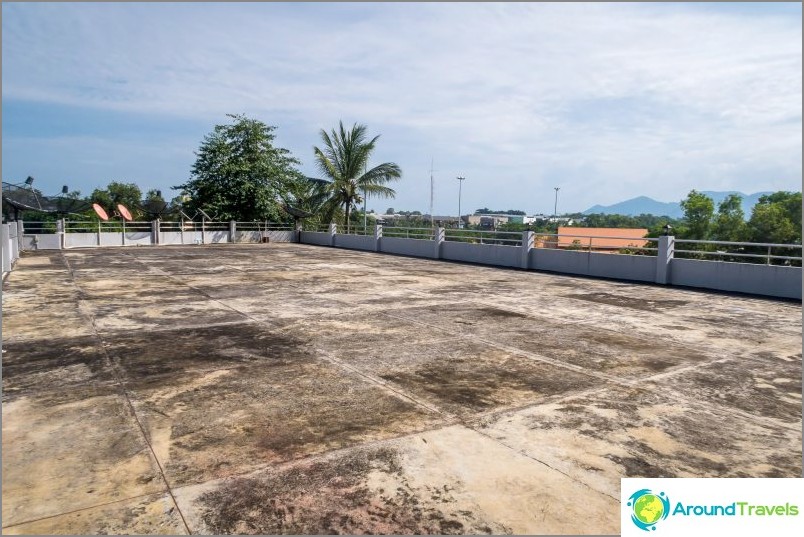 You can climb the roof of the hotel 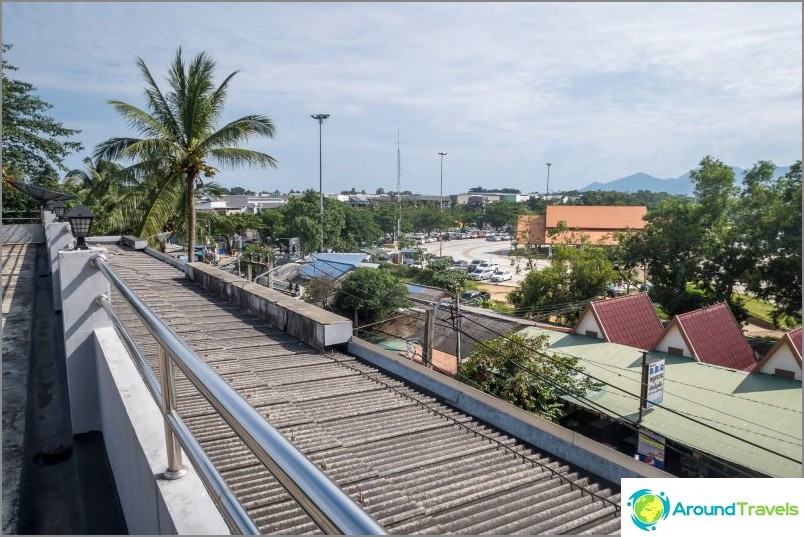 View from the roof of the Central Festival and the lake 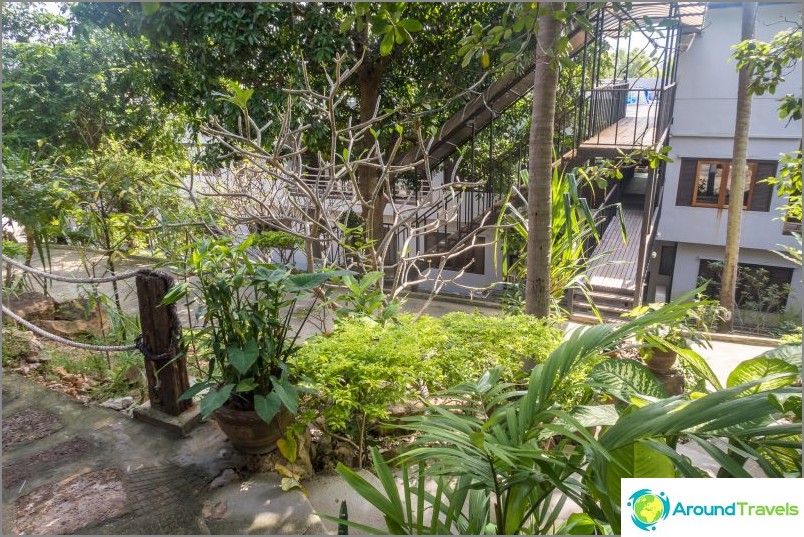 Bridge from the building to the bungalow and pool 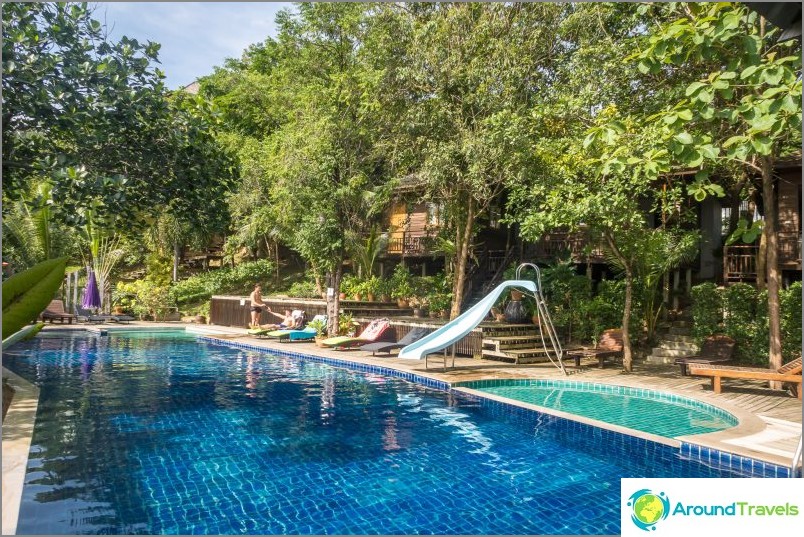 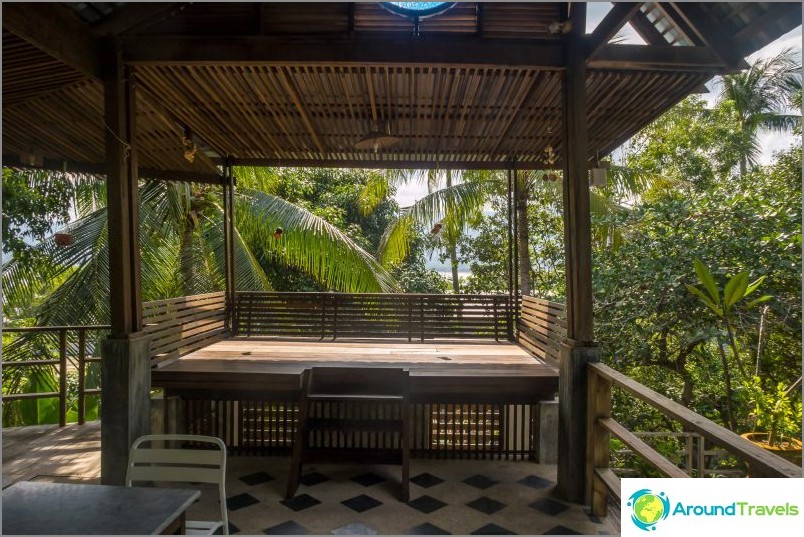 Place to relax by the pool 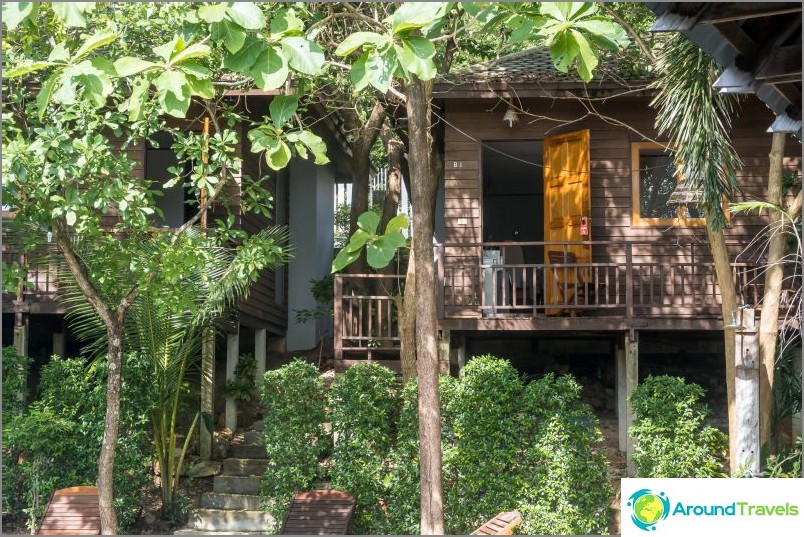 The hotel is very well located - right in thethe center of Chaweng, near the lake and the Central Festival shopping center. That is, there is generally everything that is needed. In the mall there is a large supermarket Tops Market and a food court, and in the evenings on some days near the entrance to the shopping center the market with food and clothing is broken. Nearby is the hospital Samui International.

There is a small fitness; there are several buffets right next to the hotel. I recommend walking to the beach through the Central Festival, then the road will take about 15 minutes.

I took a taxi at the hotel, it looked like it was straight fromhotel, given that the driver was already in the building, and then we went not by taxi, but by minibus. The cost to the airport is 300 baht, quite normal price by local standards.

Hotel Chaweng Park Place
Nice budget hotel on Chaweng Beach. Located in the heart of the district, near the lake and the shopping center Central Festival. Value for money.
More about the hotel..

Nice budget hotel on Chaweng Beach. Located in the heart of the district, near the lake and the shopping center Central Festival. Value for money. Read more about the hotel ..

A good hotel in Phuket on Kata Beach ...

Chaweng Resort - a hotel in Chaweng for ...