Cafe "Parus" is located on the Adler Embankment,near the port of Imereti and strictly opposite the Bolshoi ice palace. That is, you immediately open the three main options of this institution: a view of the sea (and sunsets), yachts on the horizon and parking for a lot of places right at the doorstep of the cafe. The cafe itself does not stand right next to the water, but this is normal for all coastal establishments in Sochi and Adler, where serious storms rage in autumn and winter. In general, if we compare it with the cafes of the central streets of Sochi and Adler, then Parus has a clear advantage in easy accessibility.

I wanted to start my review with the fact that the cafe Parusin Adler there are irresponsible prices (as it seemed to me after paying the check), but once again reviewing the menu, I later realized that I was somewhat biased, and prices were average for a hospital for institutions of this level. Although there is still a noticeable imbalance between the size of the price and the size of the dish (in the photo you see cheesecakes, if that.) But if you ignore the financial component, I generally liked the interior of the restaurant and the quality of the chef. The place justifiably deserves its popularity, and people are felled here, and this was noticeable even in low season.

The cafe space "Parus" is divided into threemain areas: indoor, covered veranda and outdoor tables on the sand. In the cool time of the year, at the tables that stand outside, the staff turns on gas burners, which are only useful for those sitting in the immediate vicinity. If you sit at the far edge of the table, then you have to hope only for the rugs that the waiter brings. But all this inconvenience is some kind of exotic, and therefore pleasant rather than annoying. The main thing that the waiter did not slow down with a rug, as it was in my case. I had to repeat the request twice and, as a result, independently pull it from the next table.

The furniture in the restaurant is light, the same in allzones, mostly small tables and wicker chairs, which alternate with soft chairs and sofas. Inside, the rooms are decorated in a futuristic style, made of metal frames with fabric stretched over them - apparently it should have depicted sails, but it looks more like some kind of alien city, well, or it just seemed that way to me. In any case, on the basis of all the advantages and disadvantages, the Parus Cafe in Adler is one of the best establishments in the resort, and you can recommend it at least for a one-time visit “for show”. Eat, sit in a cozy atmosphere and watch the sunset, basking in the droning fire - quite a sea romance. 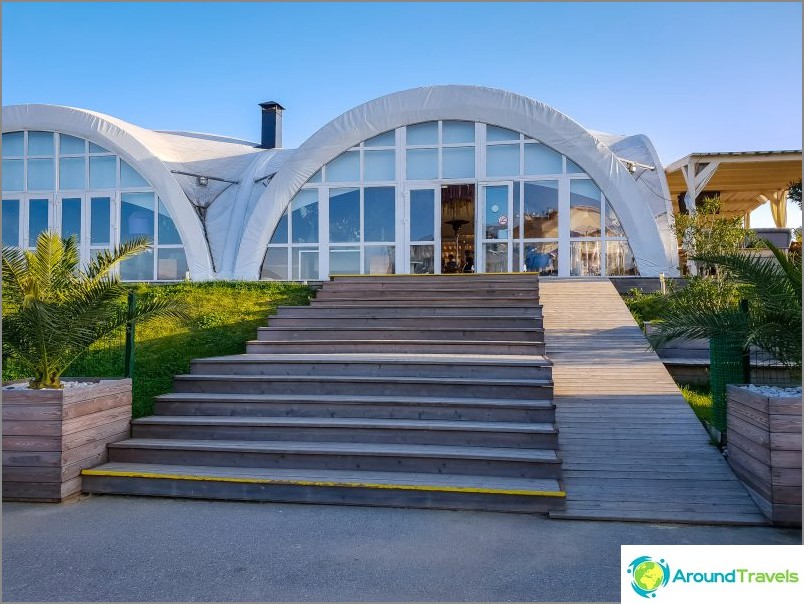 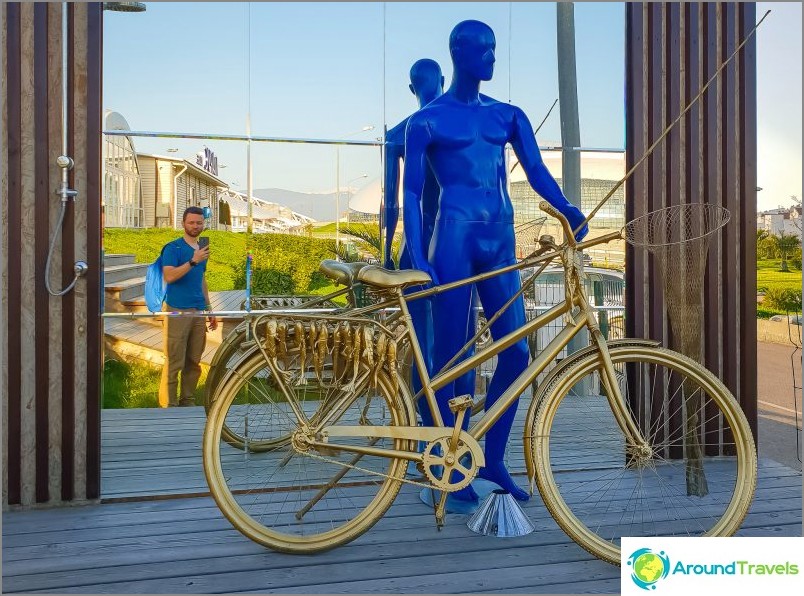 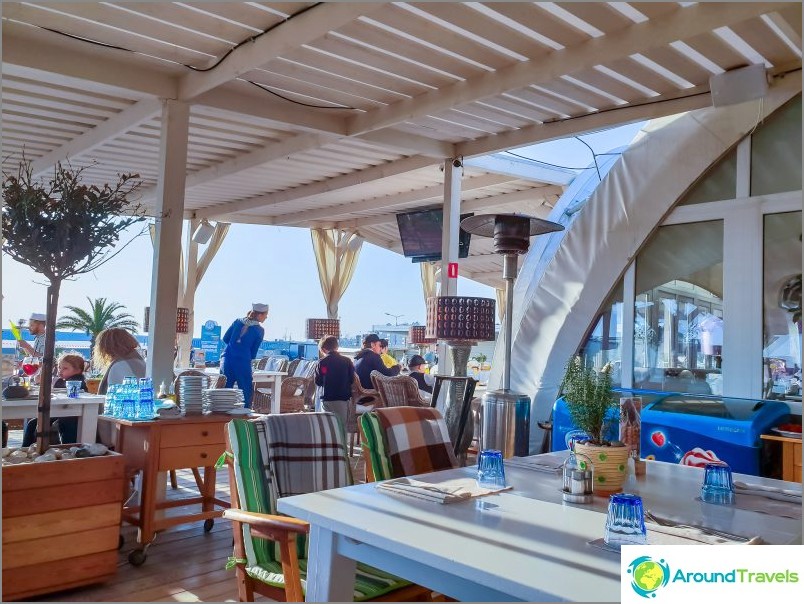 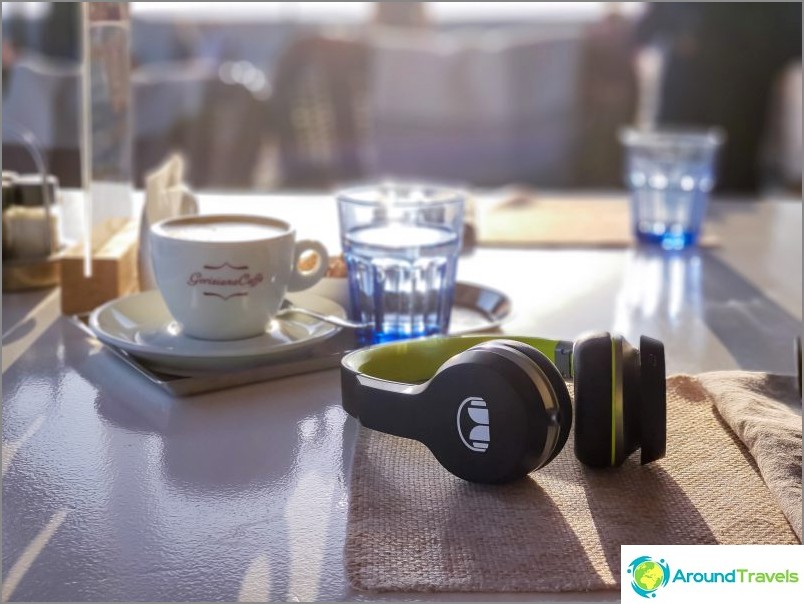 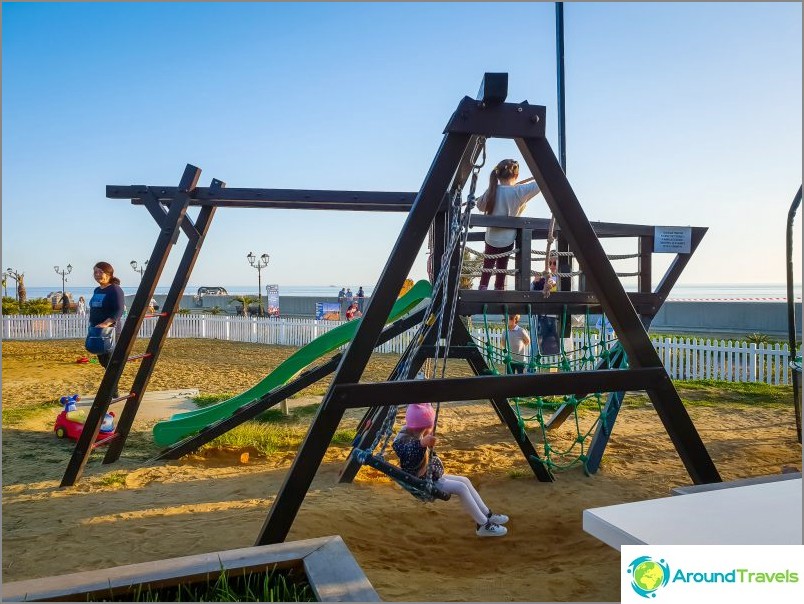 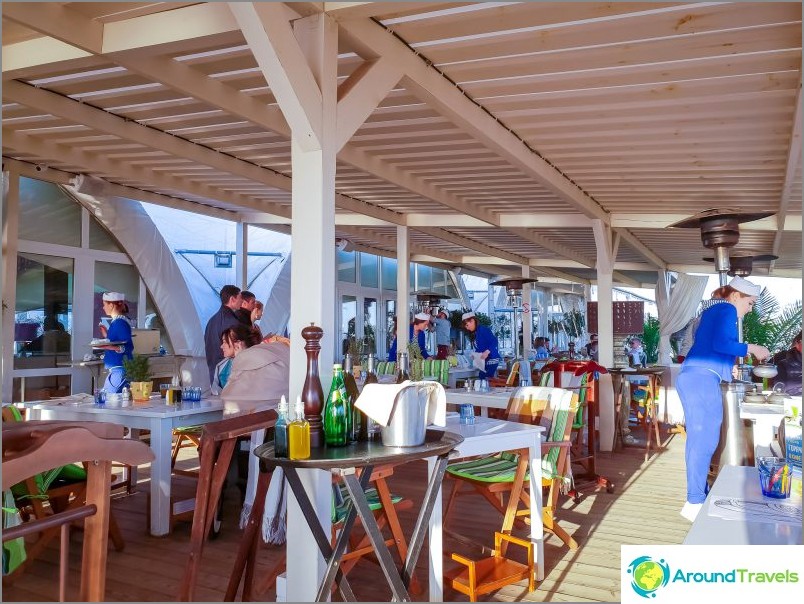 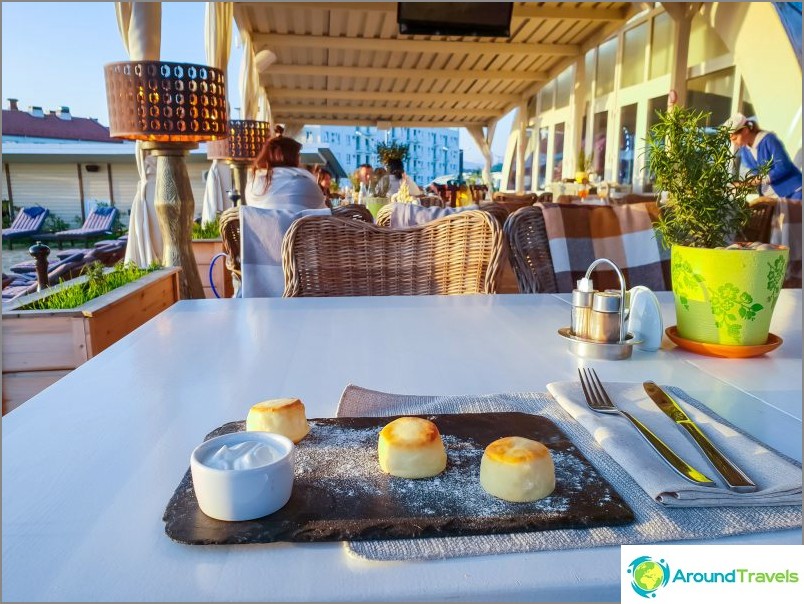 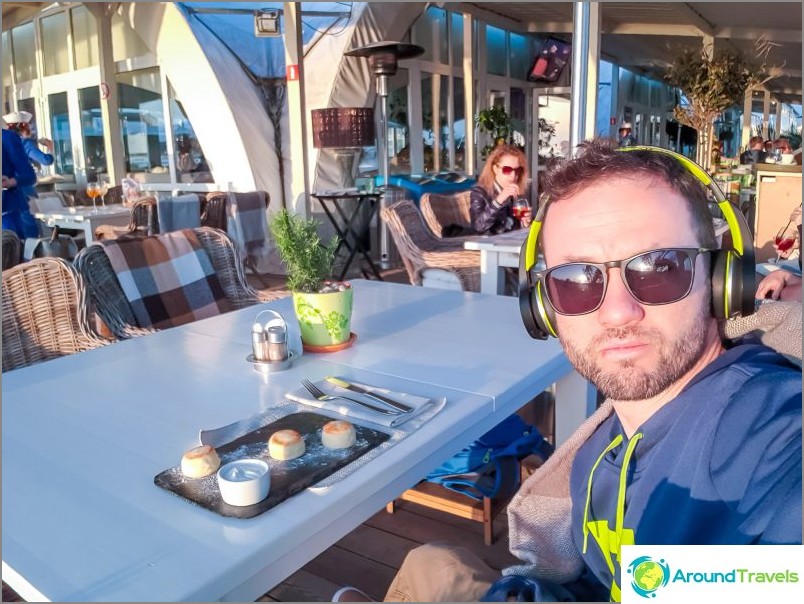 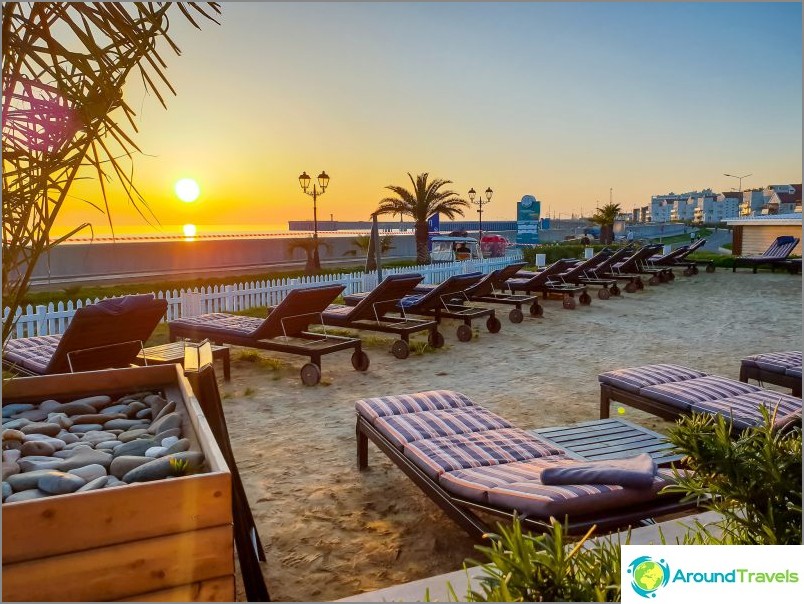 I ate 1360 rubles for one. Hmmm ... As I said, it seems normal for this kind of restaurants, but on the whole, a little expensive, considering that I did not take alcohol and full meals. But the presentation is beautiful, as it should in a restaurant.

Below you check, you can ask the price. 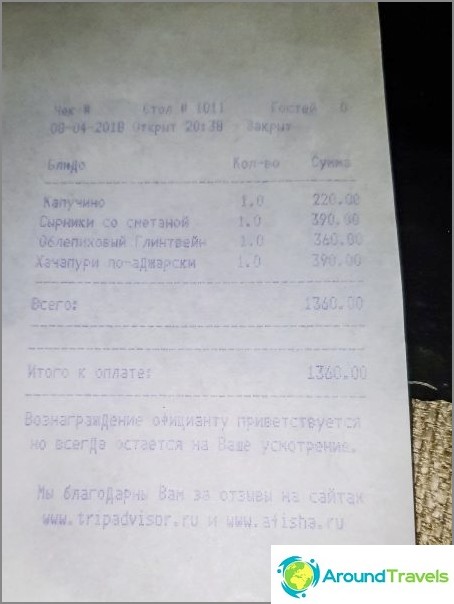 The restaurant is open daily from 9 am to 00 hours.

Check in side of the Olympic Avenue. Parking near the cafe is huge and paid, but not much increases the cost of visiting the restaurant. Just in case, across the street opposite (on the Other Side of Olympic Avenue, there is another such parking, but already free. On it, even in season, I always found a place, coming to take a walk along the embankment. From the free parking (across the street from the cafe) go 5- 7 minutes.

There is a full-fledged children's playground.

If the company will have separate accounts, it is betterto warn the waiter, so as not to get a pound of contempt and moralizing on the subject of "we must warn." One of the unpleasant impressions of this place, by the way. 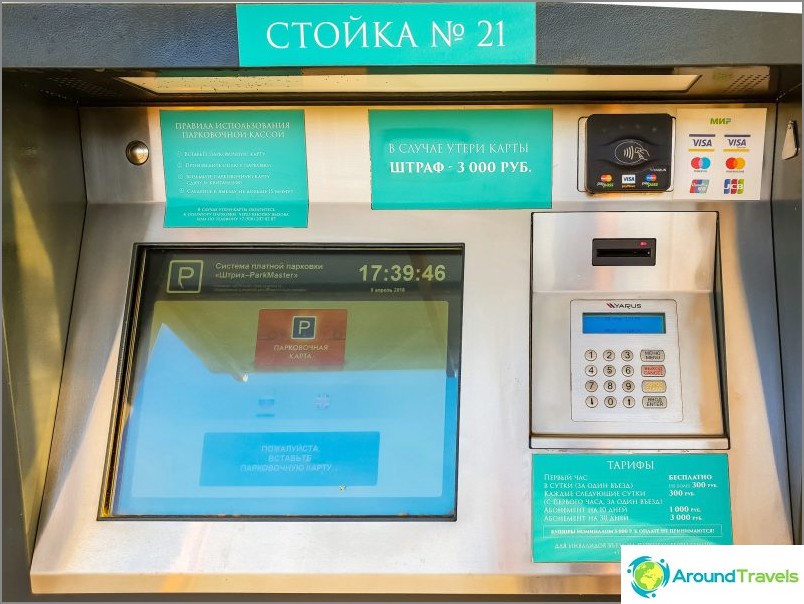 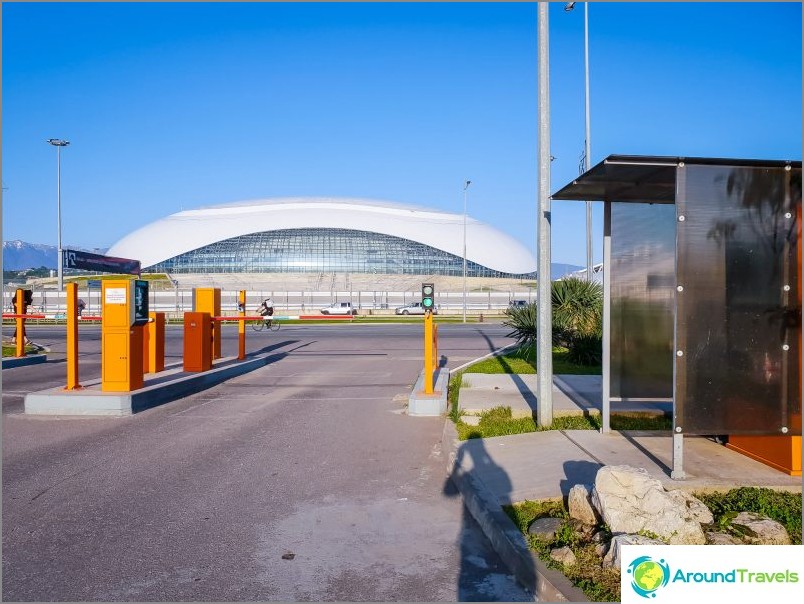 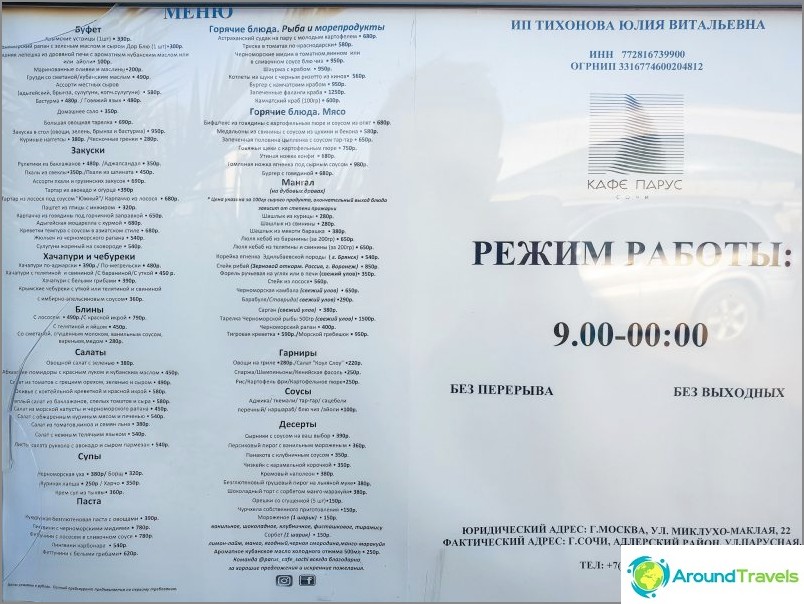 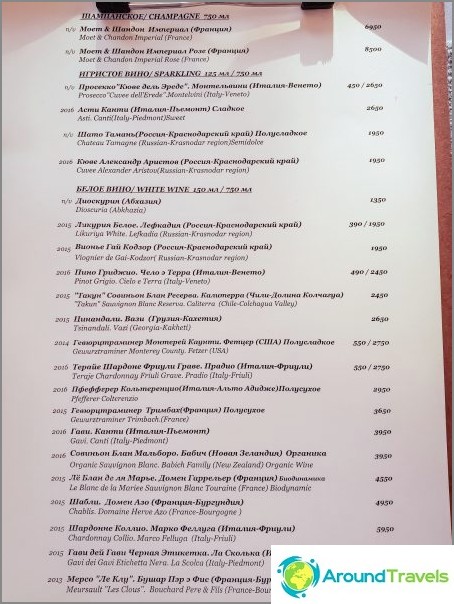 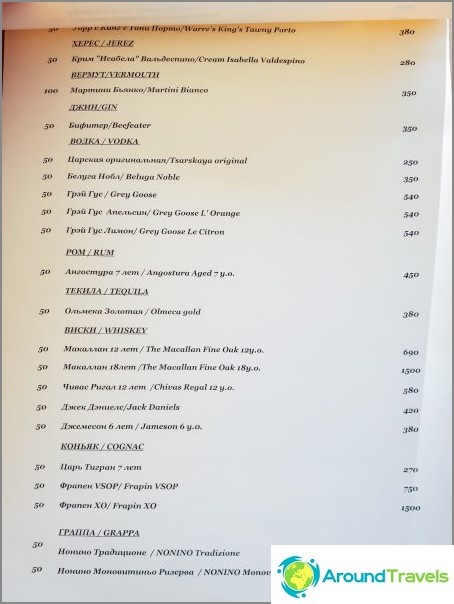 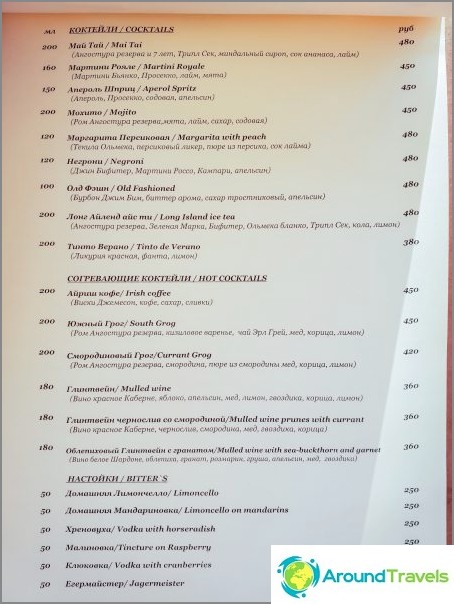 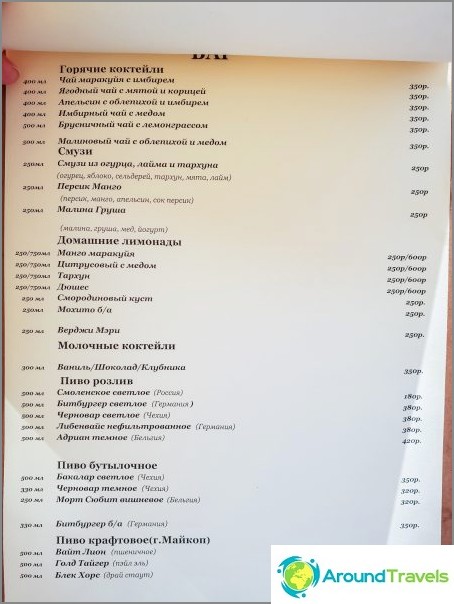 Cafe Parus
Stand alone restaurant with an interesting interiorand a magnificent sunset view. At night, turn on gas burners for heating, and give out plediki. Very long service, prices are average and boorish stuff. But tasty, without dispute.
Read more.

Stand alone restaurant with an interesting interiorand a magnificent sunset view. At night, turn on gas burners for heating, and give out plediki. Very long service, prices are average and boorish stuff. But tasty, without a dispute. In more detail.

Orekhovsky Waterfall in Sochi - a picnic on ...