Tubeteyka Cafe in Sochi - an oasis of oriental cuisine

The Tubeteyka Cafe belongs to the Delmar restaurant chainFamily and is considered one of the best oriental restaurants in Sochi. Of the six Delmar Family establishments (as of April 2018), I visited Tubeteyka and another café by the sea, on Primorskaya Street, which is called - Cafe del mar. But it will be discussed in another article, and now I want to share my impressions of "Tubeteika". Cafe is located on Navaginsky pedestrian street in a building with several more organizations. That is, there is no need to look through the eyes of a separate restaurant, as I did, - the Skullcap modestly hid behind a striped extension with a small sign.

On closer acquaintance, you find out thatCafe Tubeteyka - this is 2 rooms, separated by a passage. Not a corridor, but a passage from one part of the street to the other, which naturally affected the specifics of the institution: access to the toilets is possible only with a magnetic key card. It is issued to you immediately after receiving the order, which has a long wait. Maybe I was unlucky, and this is not typical for "Tubeteika", but I managed to blow out a whole glass of fruit drink before I waited for my hinkali. During this time I managed to take a walk between the rooms, look at the children's play area and scare my local staff with my camera - they don’t really like lenses.

Looking at the interior, I would say that it is Uzbeka restaurant. Characteristic colors and patterns, materials and details of decor, dishes with traditional baklava, everything is so recognizable and obvious, but. But the menu absorbed the best dishes of both Slavic and Central Asian and European cuisines, so I tentatively called “Skullcap” an oasis of Oriental cuisine. This is an oasis for a hungry person - definitely. And here you will find a dish to taste, which is very cool for a large company, where everyone has their own preferences.

I have no complaints about the quality of cooking,only delight Cooked really tasty, albeit long. The portions are large, from the heart, and khinkali were served not just sour cream, but their own author's sauce, ideally combined with beef. In general, in spite of its vegan past and, in principle, not too reverent attitude to meat, Tubeteika was able to pleasantly surprise me. The service is extremely correct, lightning-fast and without too much servility, which for some reason the waiters try to instill in some expensive establishments. The place is valid and is definitely recommended to be visited at least once. 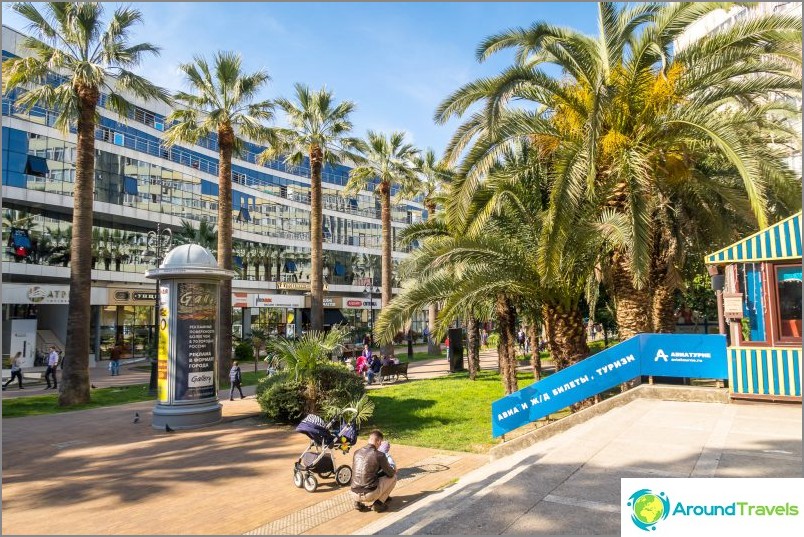 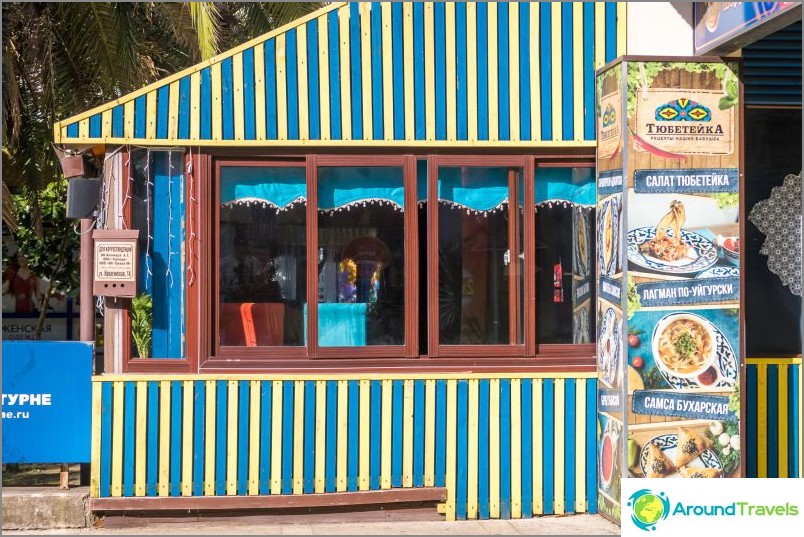 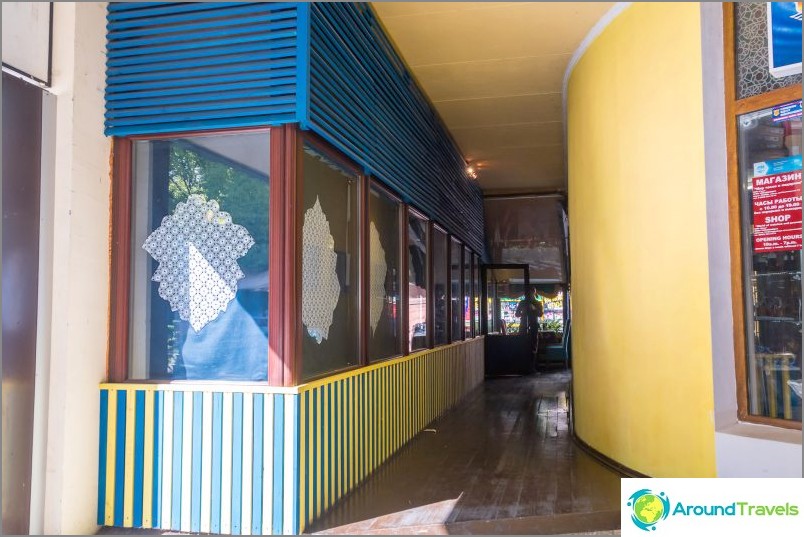 The passage between the premises of the cafe 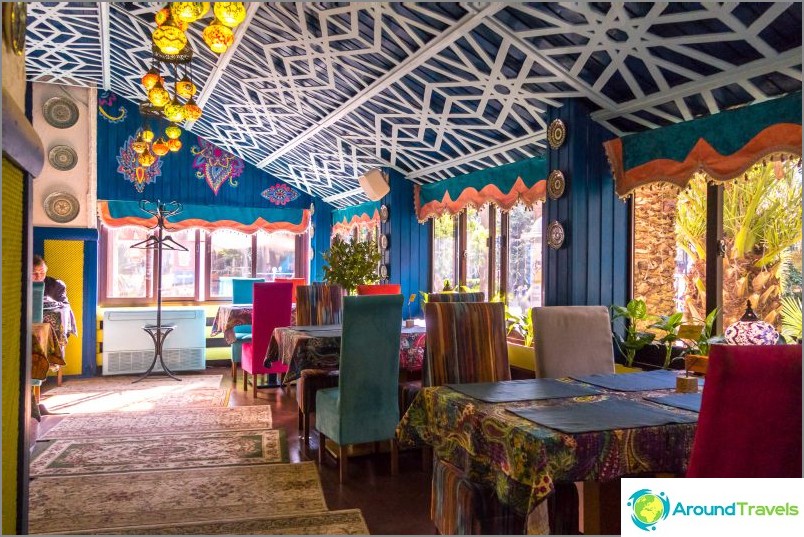 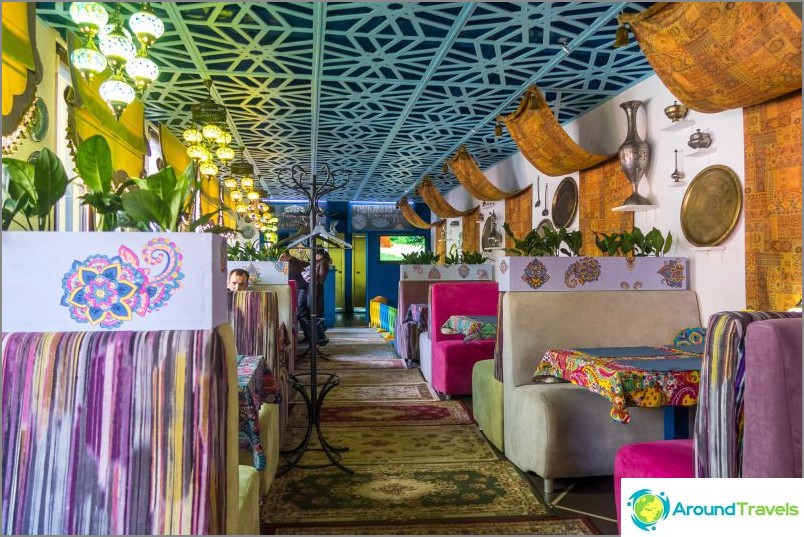 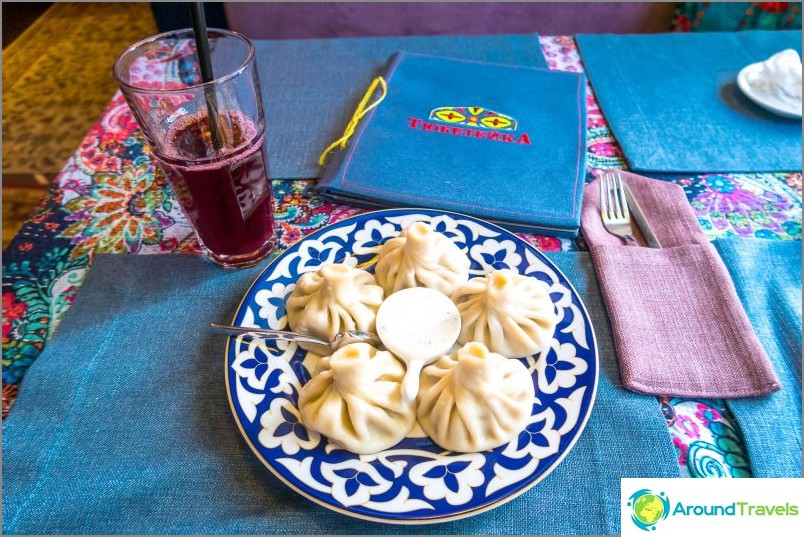 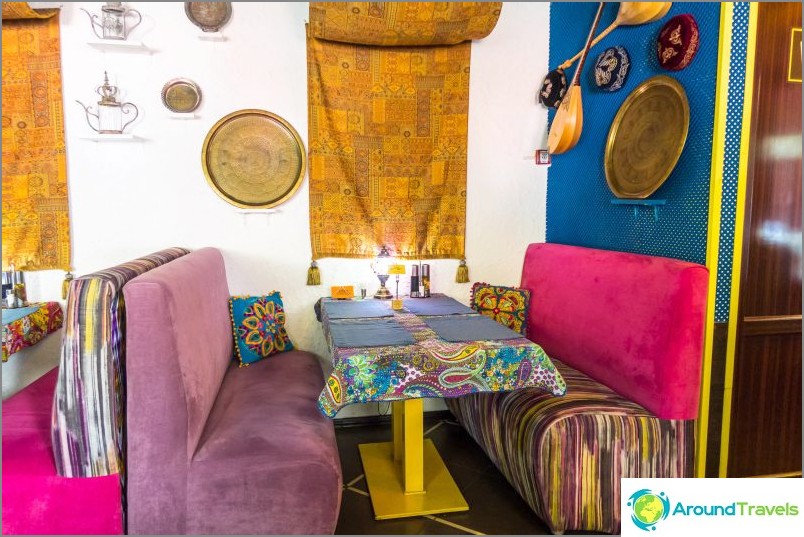 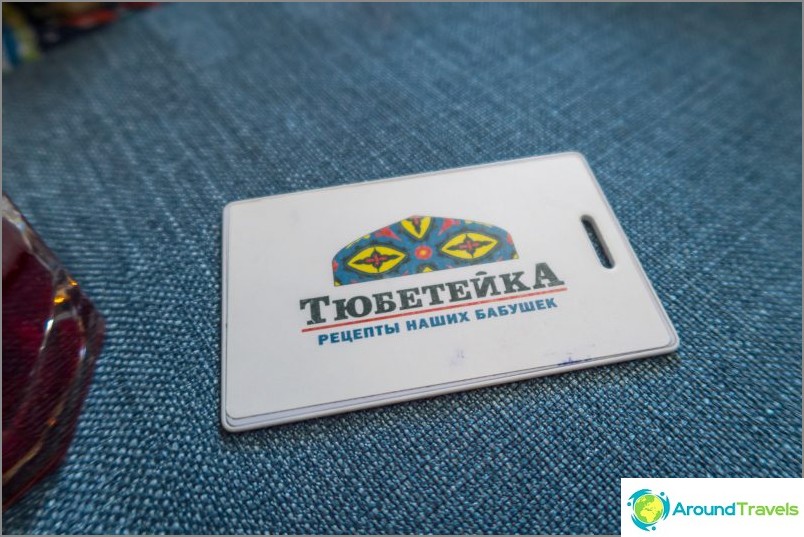 We don’t have our own parking lot, we need to park in the neighboring streets or paid parking lots.

Do not sit by the open windows - from the street tightens cigarette smoke.

There is a play area for children. 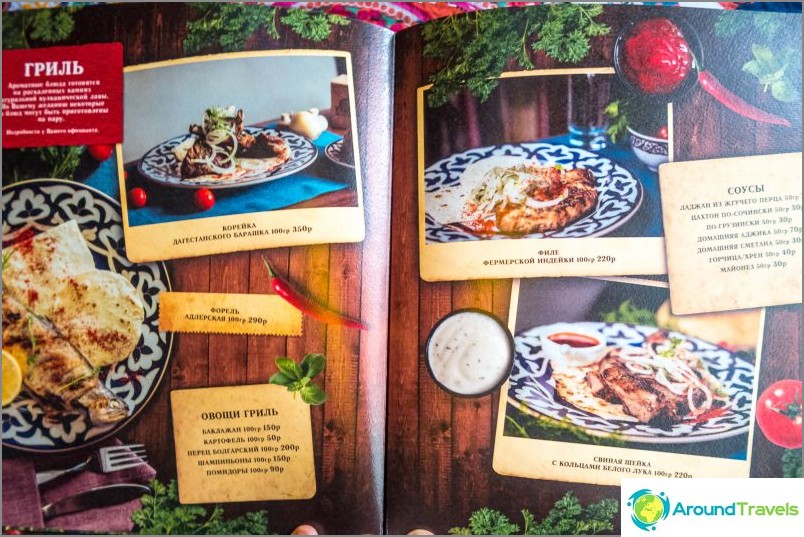 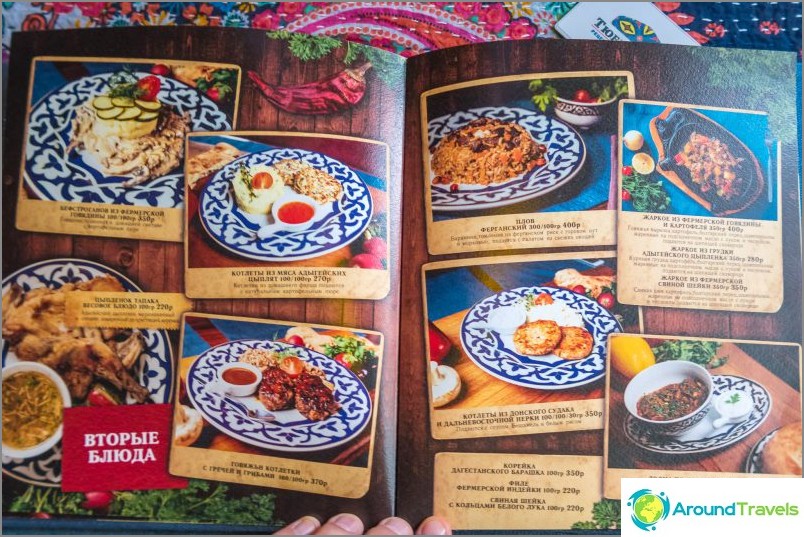 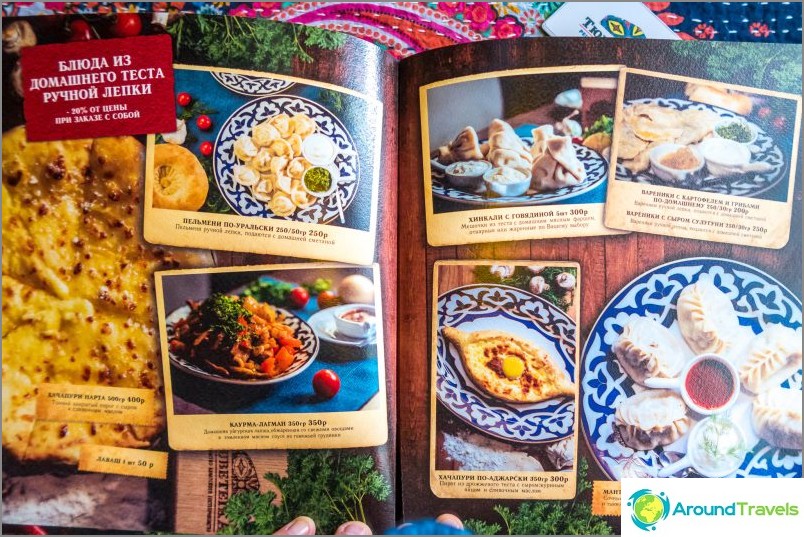 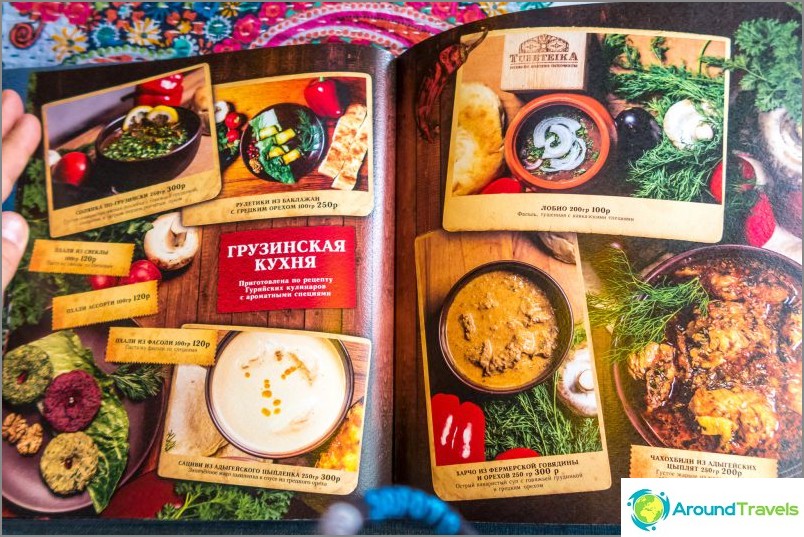 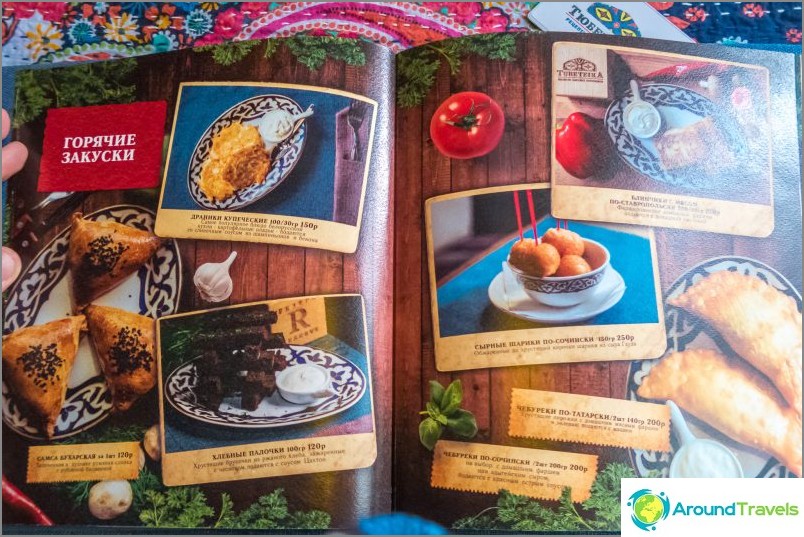 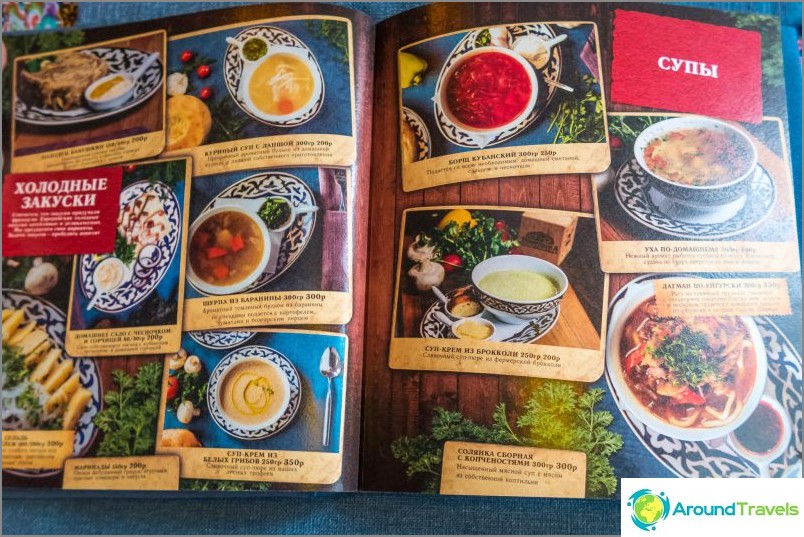 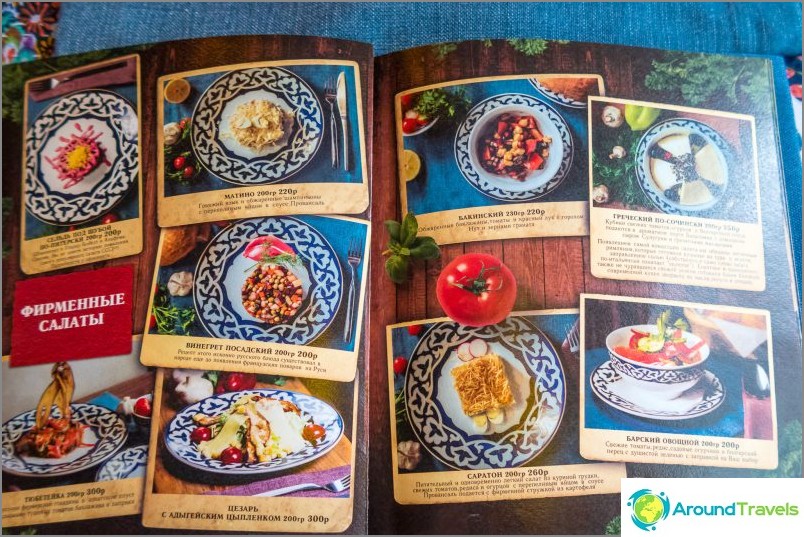 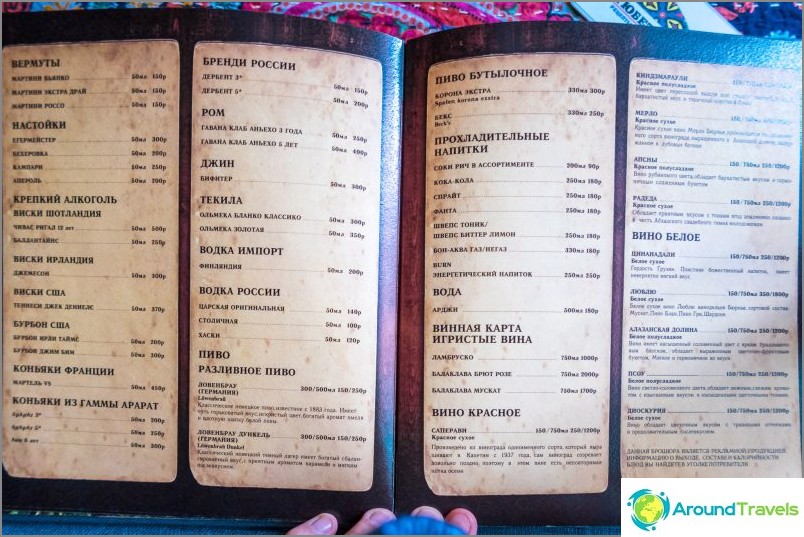 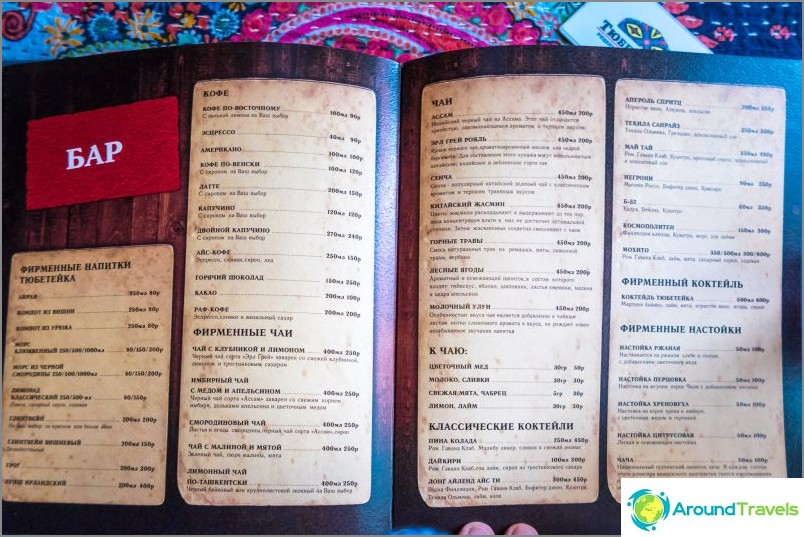 Very simple place, divided into two rooms, in the building of the shopping center. Authentic decor, toilet on the cards and very tasty khinkali - small Uzbekistan in Sochi. In more detail.

Rest savage on the Black Sea in tents ...