Samui Camp (Samui Camp Bar) - a bar on a large rock, located strictly above the village of Lamai, closer to the edge of it, where they built the MACRO, and there is also a famous landmark - rocks hin ta hin yai. Besides the fact that it is a bar and a party place, it is also one of the best viewpoints on the eastern part of the island. I met many similar places on Phangan, but there are only a few of them on Samui.

Update for May 2018: the bar is no more, now here is the construction of something large-scale and apparently expensive. It looks like a villa. So the information below is hopelessly outdated.

It is a small rasta bar madefrom koryag, bamboo, boards and everything that came to hand. The part of the bar where the bar is located, drinks, equipment and wires are hidden under the roof of the building, and there are five bar stools for those who are “lucky enough” to get to the bar during the rain.

The rest of the territory is open space,partially cultivated, in part - just bare rock with concrete chairs. In the “hall” there are pillows on the floor, low tables are arranged, the interior shows that you will not be surprised at your question about “smoking”.

From the cliff there is a beautiful view of Lamai andthe sea, as you can see from the pictures - I came here immediately after the rain, people apparently washed away, the bar itself was rotten, only the tavern with dreadlocks was sitting, he is a barman. But even in cloudy weather there was unreal beautifully. But one thing is boring. But the most it will be, if you gather here with friends and sit longer.

UPD As of August 2017, the bar asas if the end has come. According to our subscribers, the bar itself is broken, and the prospects for its continued existence are vague. In any case, it was, is and will be one of the best views in the east of Samui. 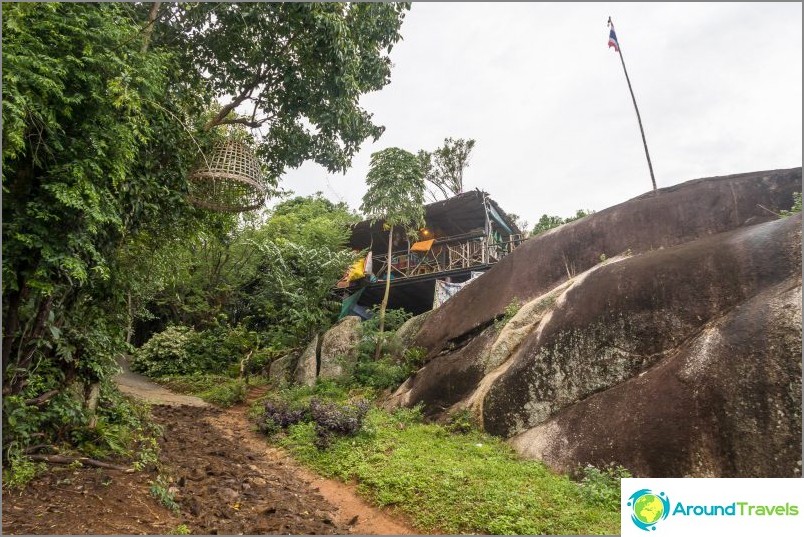 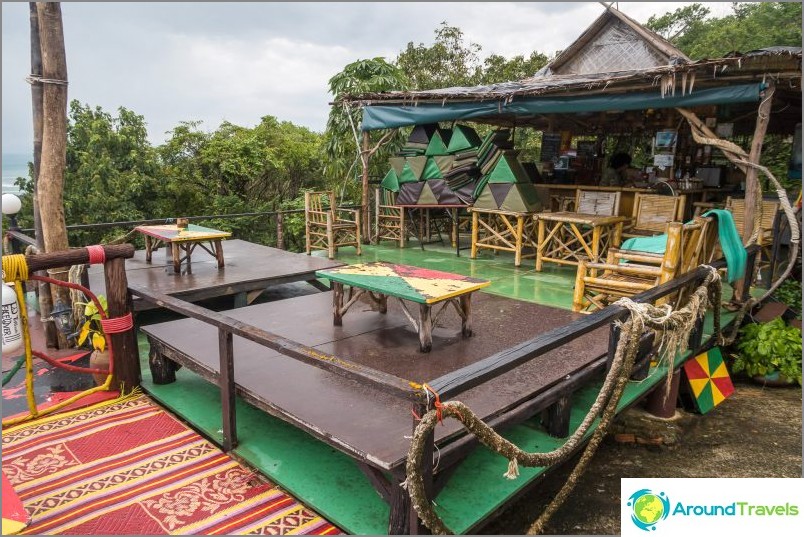 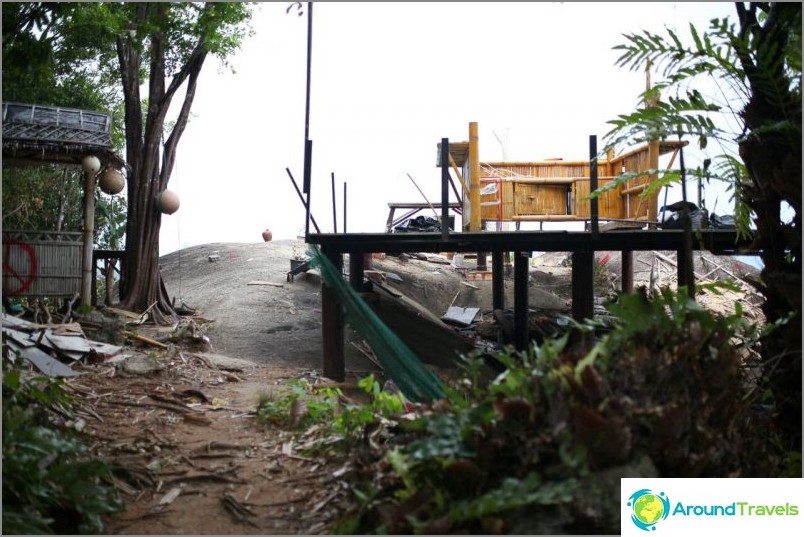 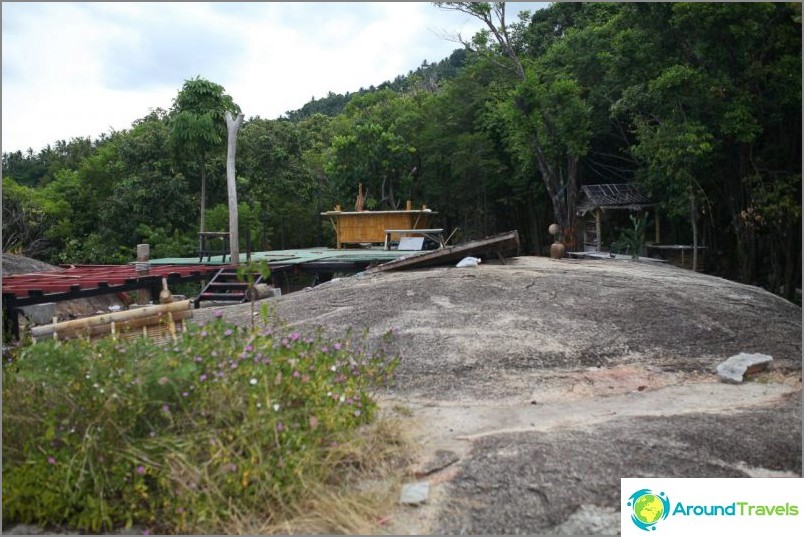 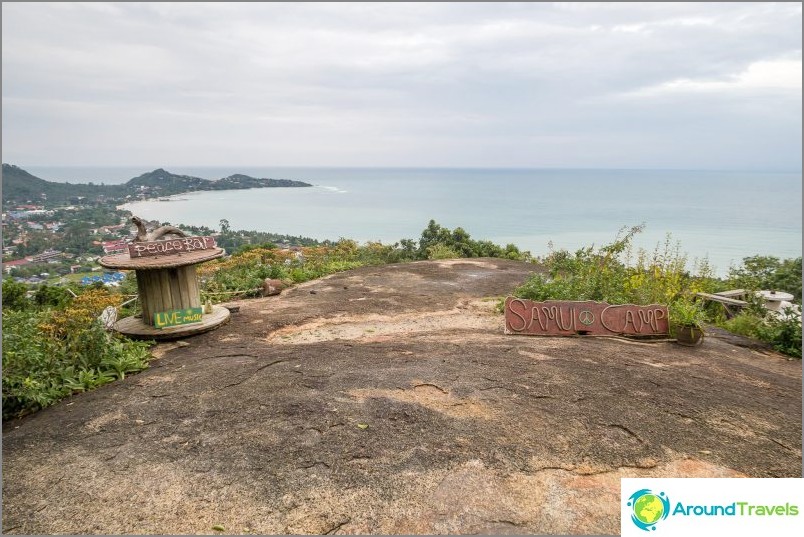 The best observation deck on Samui 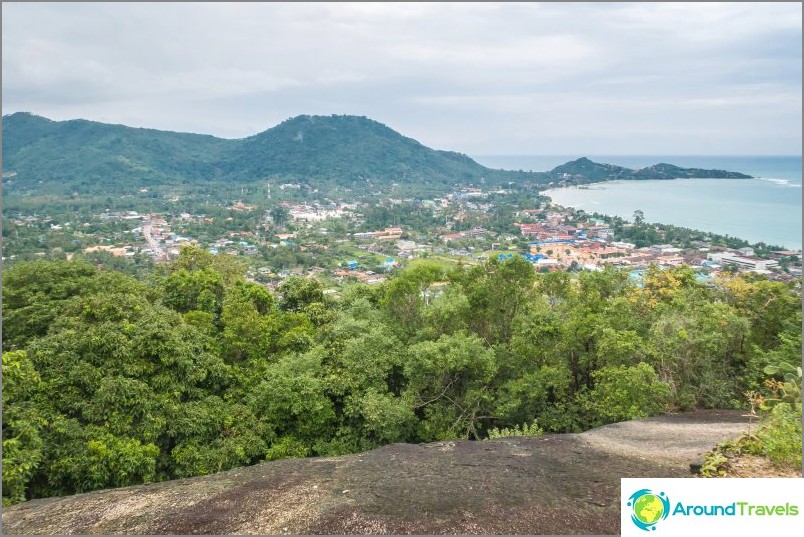 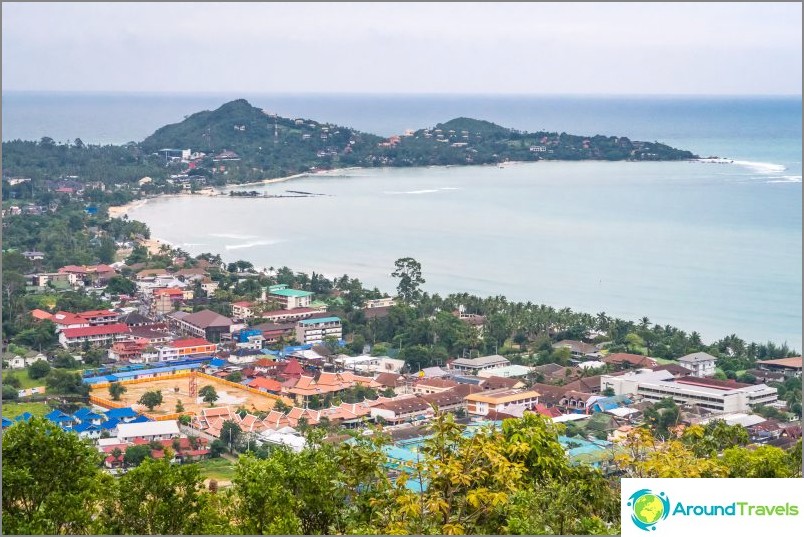 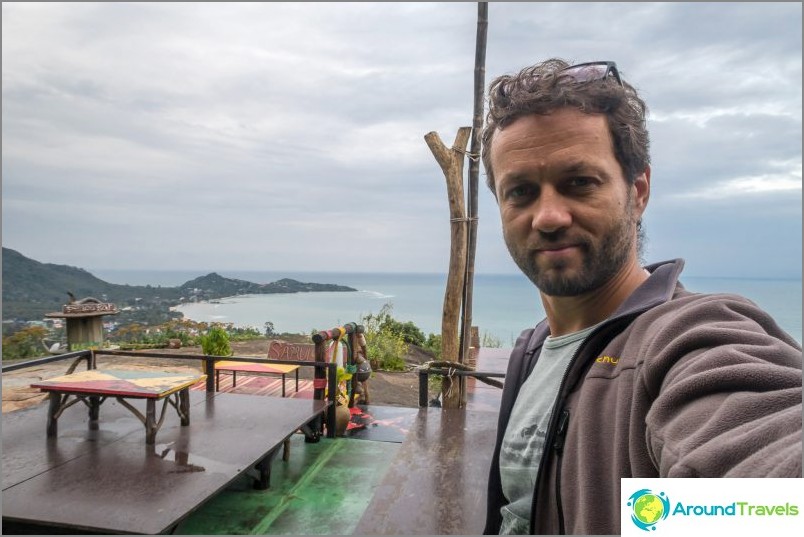 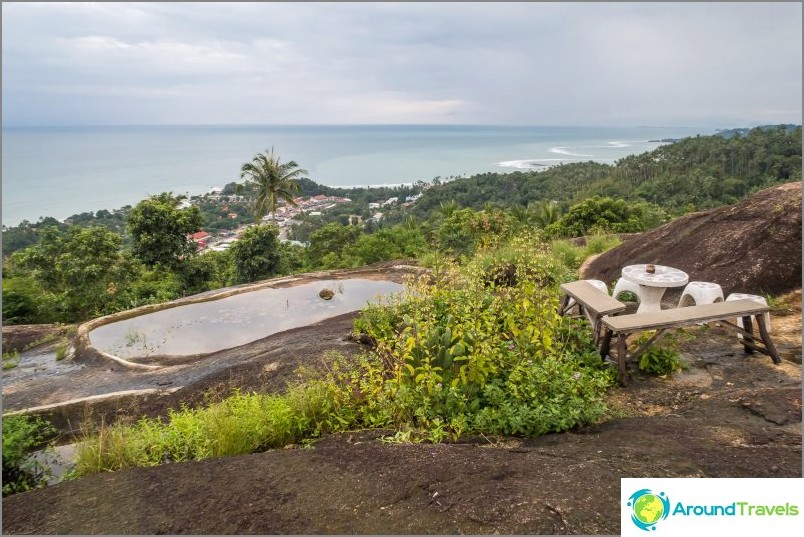 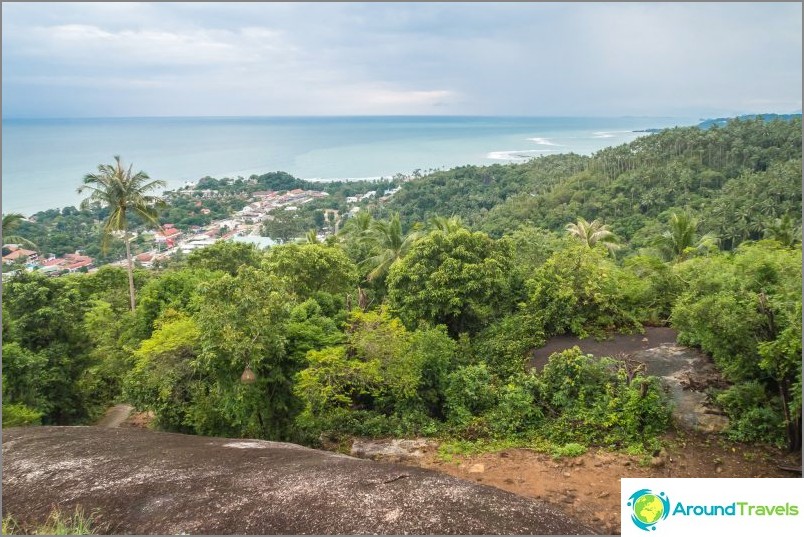 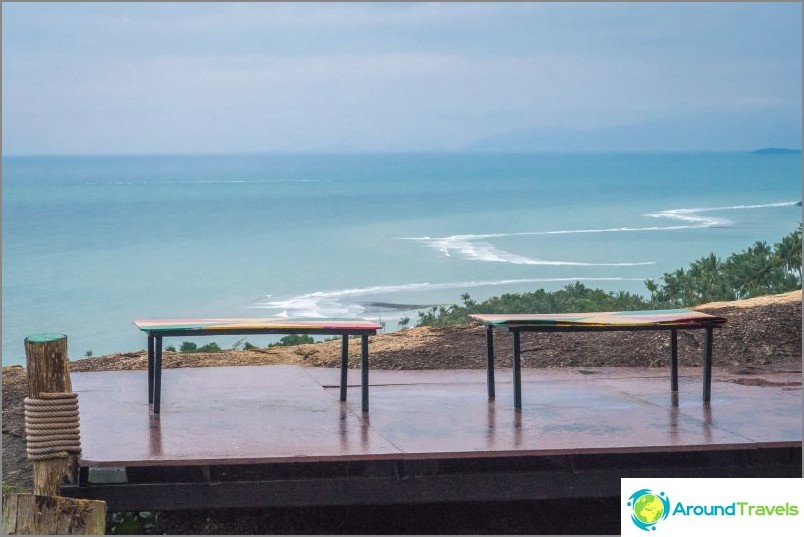 Strange Buddha figures in the jungle

If you drive on the road, not turning on SamuiCamp, and go to a dead end, where the concrete ends, then to the left along the direction of travel there will be remnants of either the old bar or the temple, and about twenty terrible sculptures in the middle of stones and jungle. Maybe this is a parody of buddha park nearby, only on a smaller scale?

To go there without closed clothes and shoes is notIt is recommended - a lot of thorns and high vegetation. The statues were placed apparently for beauty, and after the destruction of buildings, of which only the toilet walls remained, the statues became targets for the owners of weapons. On closer examination, they can see bullet holes, well, or maybe it seemed so to me. I don’t bother to explain who is there in these figures, but most likely characters from fairy tales, legends and Buddhism. 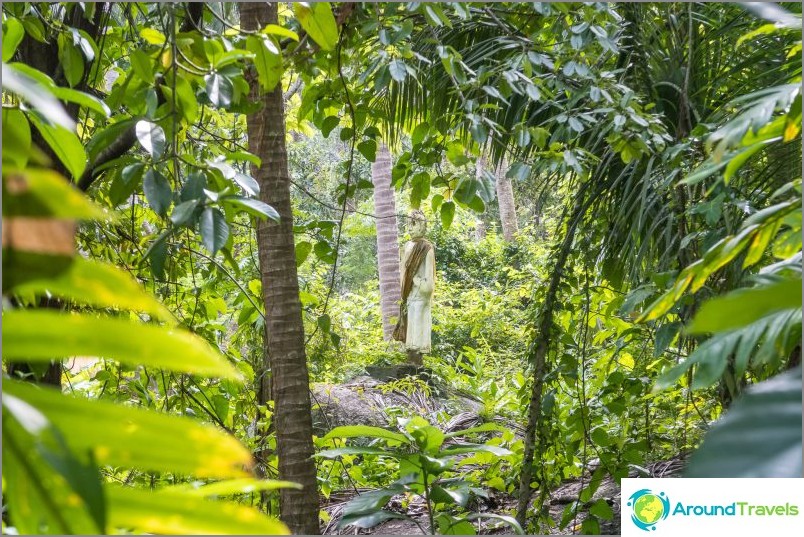 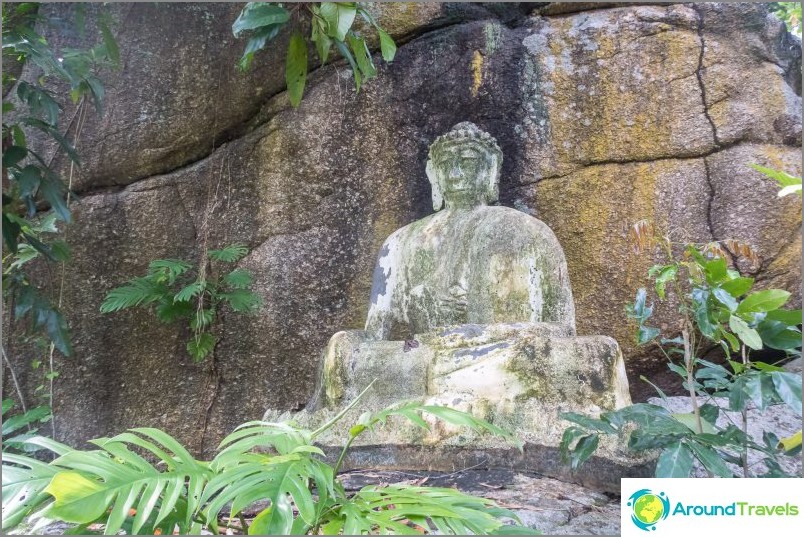 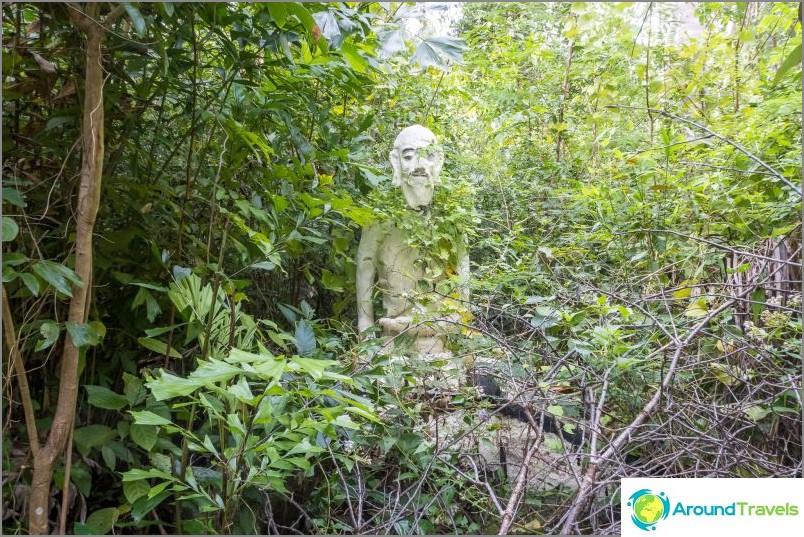 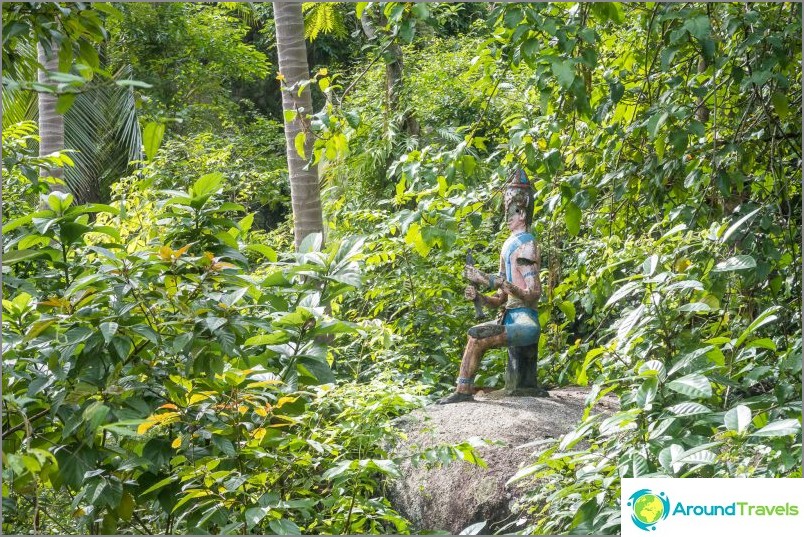 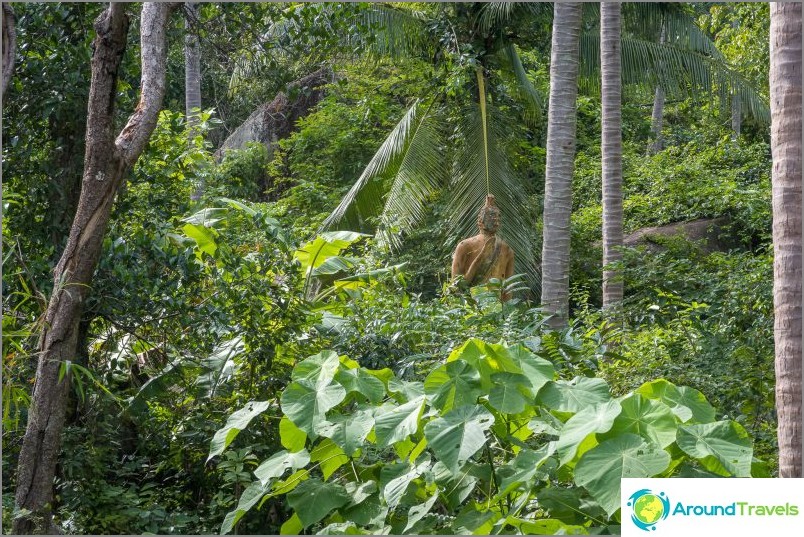 Rates here are average for the hospital, food per senot. I ordered a jar of Schweps, it cost me 30 baht. The entire menu of the bar is drinks, and by and large, this place is intended for communication to music, cigarettes and alcohol. Behind the bar, up the slope there are several straw bungalows where you can stay for the night if you wish. On Fridays there are noisy parties, he did not see, but people say that it is fun.

How to get here

Before coming here, I read that the road to the barquite complicated, but for me it’s quite easy. From the ring road, the ascent takes no more than three minutes, after which you will have to skip one bar, to the left, which also nestled well on the rocks and there is a good view from it, but this is not the place. And then 50 meters after this bar, at the lonely house on the turn there will be a pointer to the right, on a dirt road, covered with old coconut skin. An old bar owner’s pickup truck runs periodically along this road, it’s an elevator.

For inexperienced bike drivers I recommend quitting.technique around the house. Because a narrow strip of cement, about 50 cm wide, leads upstairs, and if you don’t manage it, it will be very unhealthy. Plus, the road is not straight, but with a closed turn, so there is a chance to face the same newcomer. But if you are with a bike "on you", then after 100 meters up there is a small parking for cars and scooters. Speaking of cars, I mean all-wheel drive SUVs, because the usual passenger car here does not even drag itself. 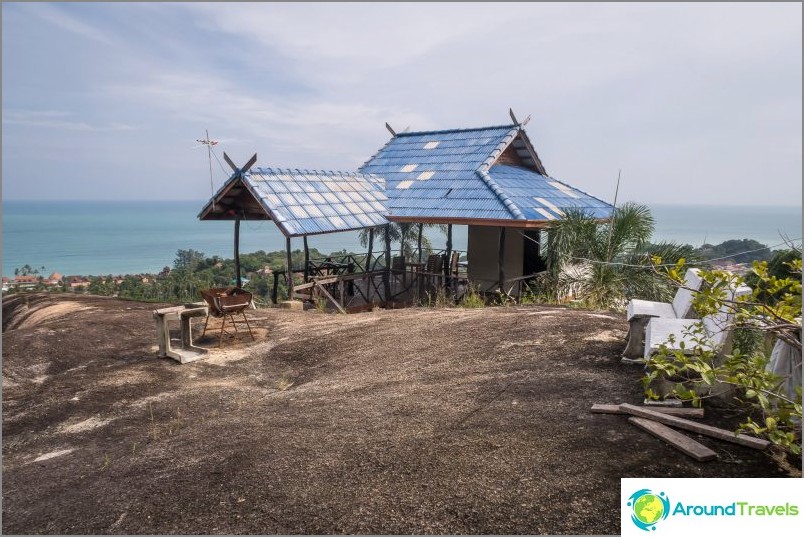 Abandoned French bar on the way to Samui Camp 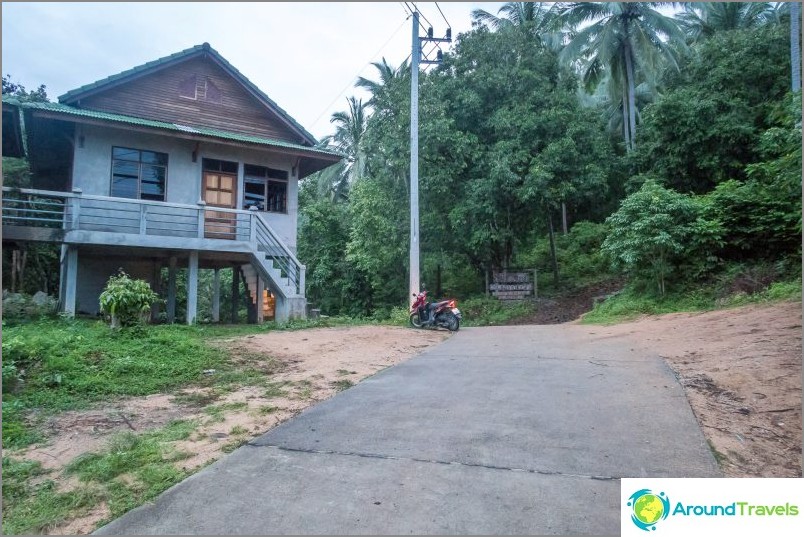 House, near which you can throw equipment 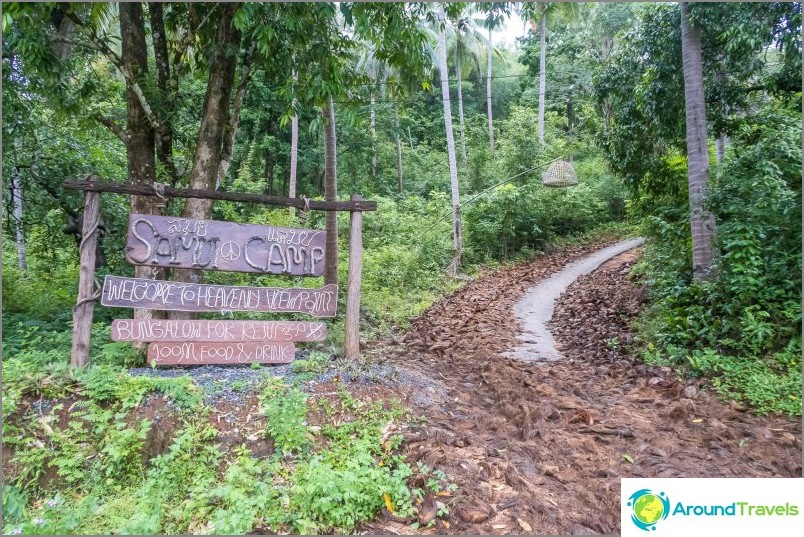 Ahead - a closed turn to the left and up. 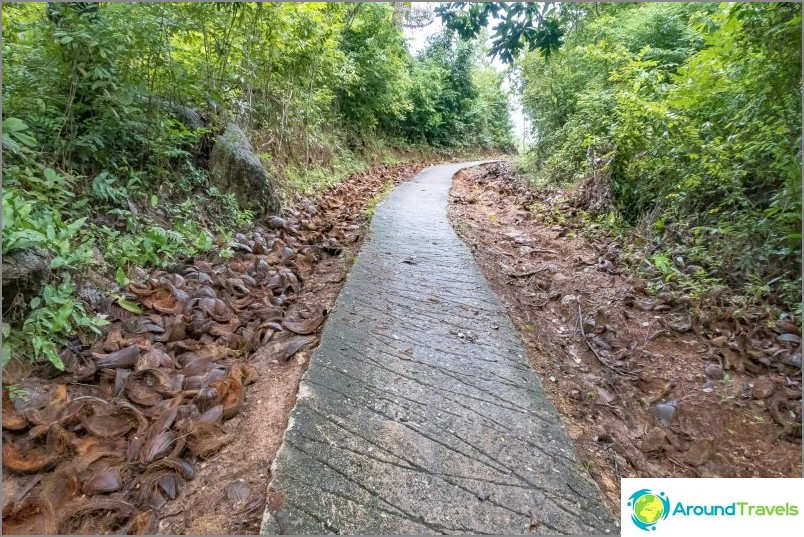 Samui Camp Bar
(Bar closed) Represents a smallRasta bar, made of koryag, bamboo, boards and everything that came handy. In the “hall” there are pillows on the floor, low tables are arranged, it’s pretty obvious that they won’t be surprised at the question about smoking.
More about the bar. 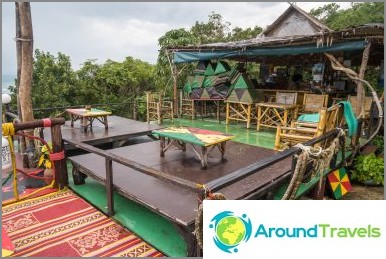 (Bar closed) Represents a smallRasta bar, made of koryag, bamboo, boards and everything that came handy. In the “hall” there are pillows on the floor, low tables are arranged, it’s pretty obvious that they won’t be surprised at the question about smoking. Read more about the bar.

All beaches of Koh Chang and the best beaches ...

How to search for information - sites and forums ...