In my opinion, the most important thing in camping isadequate owners, who not only do their work normally (and not just-asy, as is often the case in the Krasnodar Territory), but with which the notion of wild outdoor recreation coincides (for example, a ban on music). Mindful as I liked in Enot Arkhipo-Osipovkadecided to visit their second still quite youngcamping in Lermontovo called Enot-Lermontovo (network of 2 campgrounds). Knowing the location of the campsite, he rode with skepticism, but he changed to directly opposite. Well, okay, my review is in order.

Camping Raccoon on the Black Sea

Since 2016, the owners have changed (now it’s the same ones who did Raccoon-Arhipo-Osipovka) and orders are somewhat different, as well asconditions (banned loud music and drunken loud companies). There are sinks, civilian toilets, gazebos, scheduled shuttle to the sea. They also promise to make a map of the location of places with online booking. And they have a live raccoon in the aviary, as a symbol of camping. True, there are enough wild raccoons in the forest, which in the evenings come to feast on what is left, so do not leave food on the table or in a tent if you do not want to lose it.

Camping is located in a deciduous forest on a hill withedge Lermontovo. As I understand it, land with access to the sea for many years is rented by family clans and there is no way to get through there. Therefore, there is no sea view (only through the trees and from afar), it takes about 15 minutes to go to the beach. But having gone to the city beach and to the wild, I did not experience any particular discomfort, it’s not that long (I’m 1,500 km from Moscow to the sea). And if you do not want to go back up, you can always call the campsite and they will pick it up by car. The only thing that is not very much with a small child is that on the way to the campsite you need a carriage with wheels that can drive through the gravel.

Disadvantages of close proximity to the seaoffset by solitude! To sleep in a tent near the disco, I think, is not for everybody. Camping is not for those who love a noisy vacation at the epicenter of civilization. And, of course, the home environment plays a role, it was first felt in Sosnovyi Paradise. The hosts are friendly, always everyone will show and tell, will try to solve all your questions. It is difficult to describe in words, but obviously a different attitude, not as it was in some other campgrounds, where you feel not as a client, but rather as a debtor, encroaching on someone else's property. 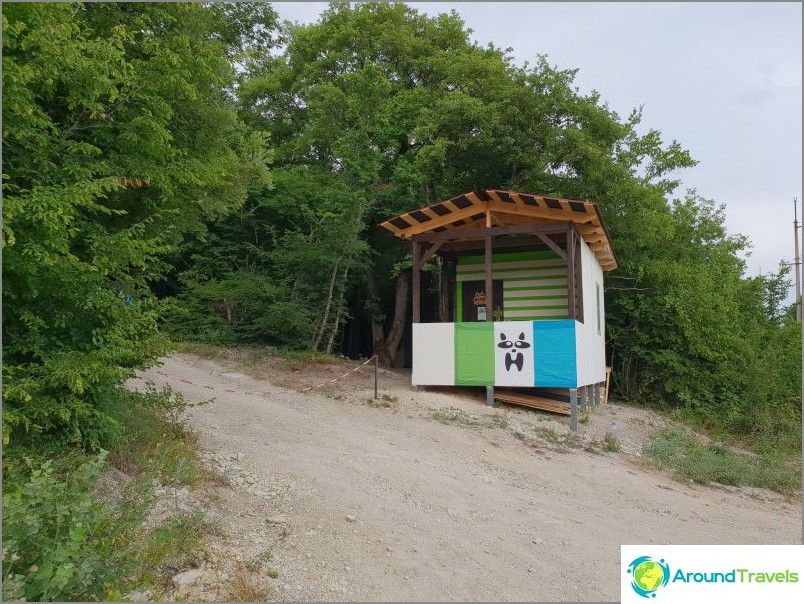 Cottage administration at the entrance to the campsite 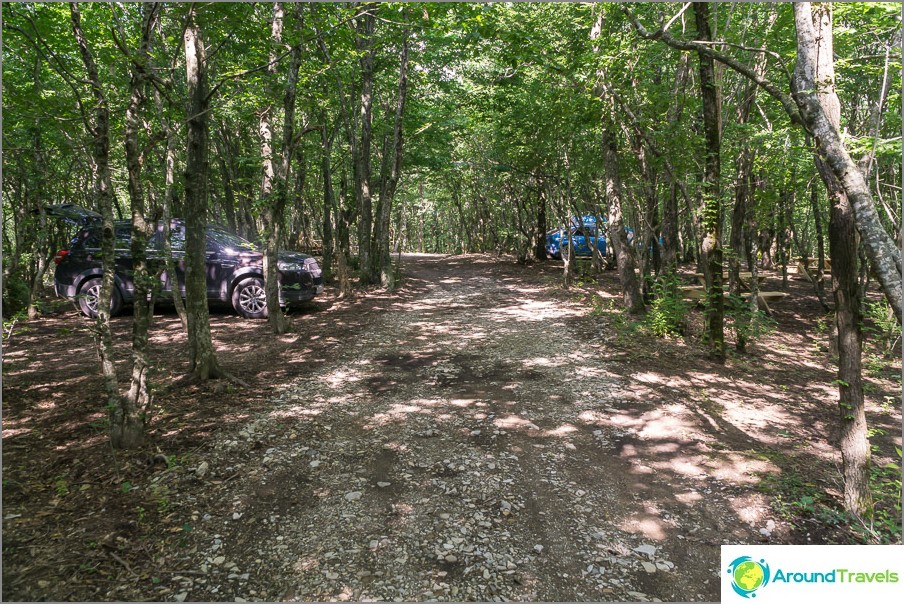 Camping Raccoon is in the deciduous forest 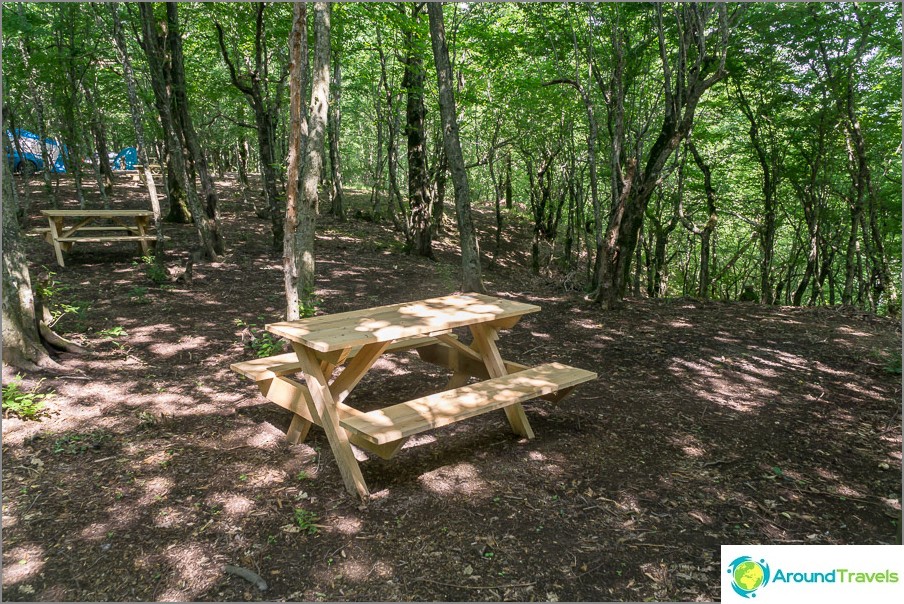 On all the clearing arranged tables with benches and barbecues

After standing a couple of days, I was surprised to findmyself, that I like deciduous forest as much as pine. The shadow is much stronger there, which is very important in the heat, and is somehow more familiar for a person who is used to the middle band and birch trees. By the way, in many campsites on the Black Sea coast, for example, in the same Lermontovo or Dzhubga, you will generally stand without a shadow, and you can roast in a tent, I already had that experience. 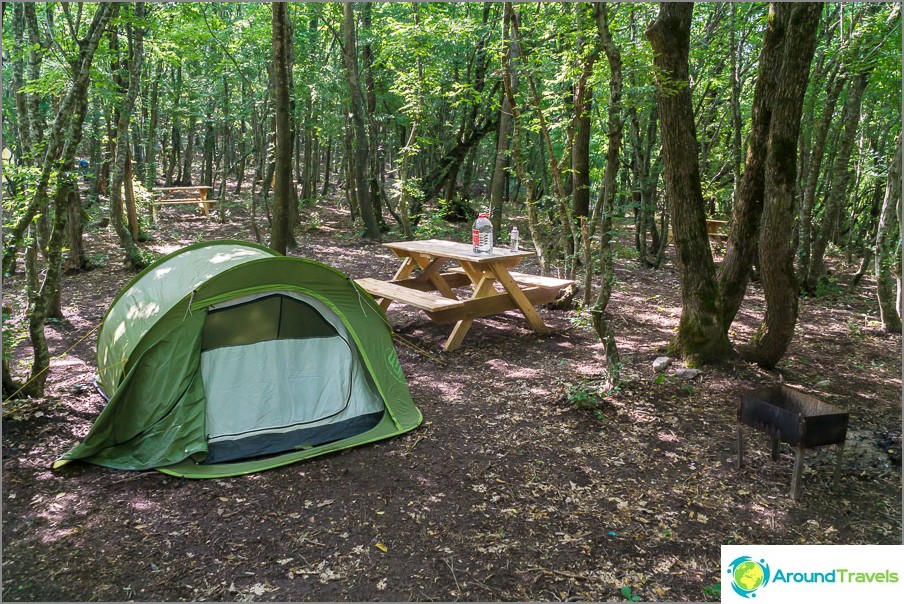 My tent and clearing at the campsite 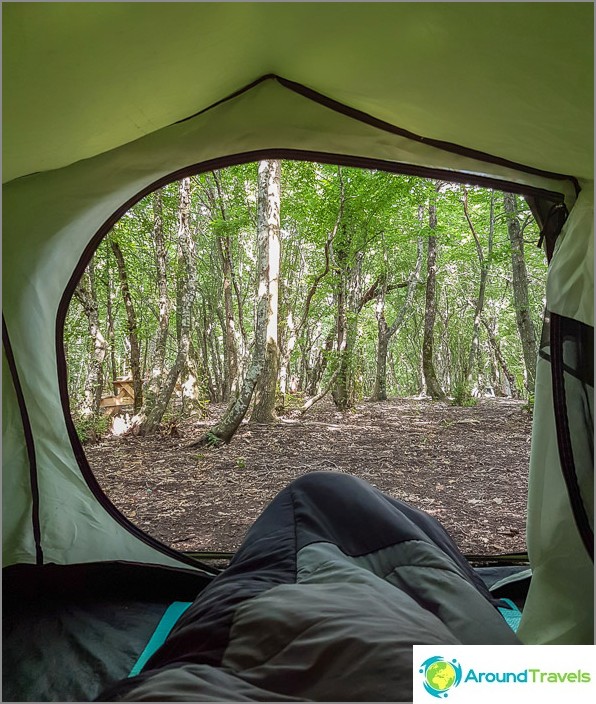 They say over the years, the traction passes, but I still love tents 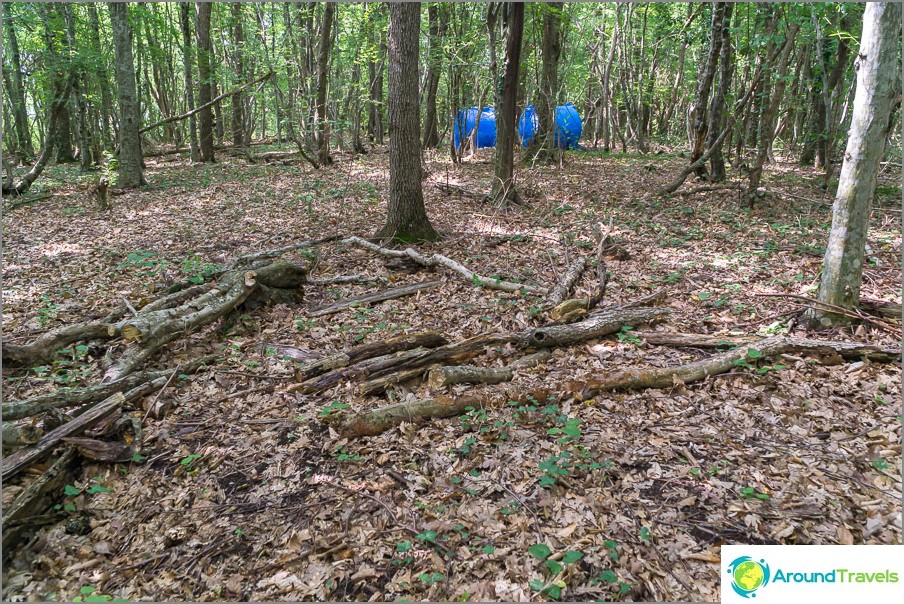 There is still plenty of free wood in the forest. 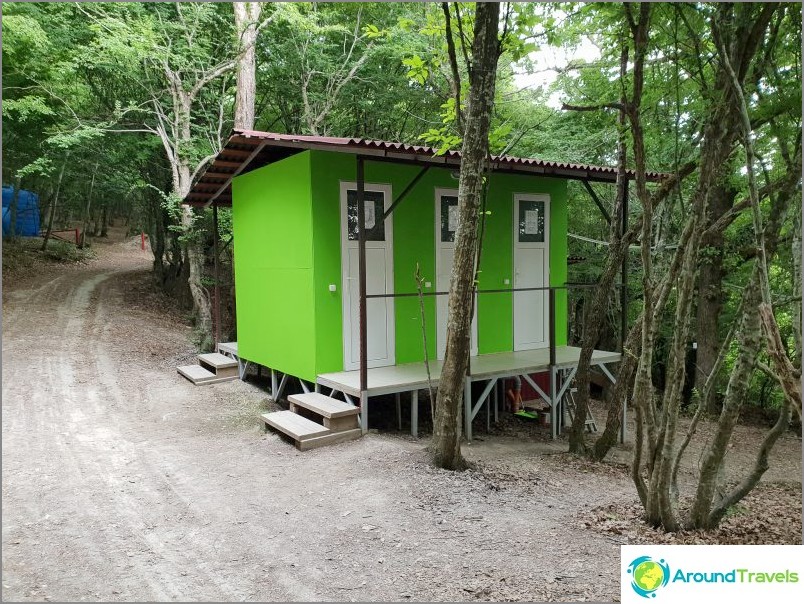 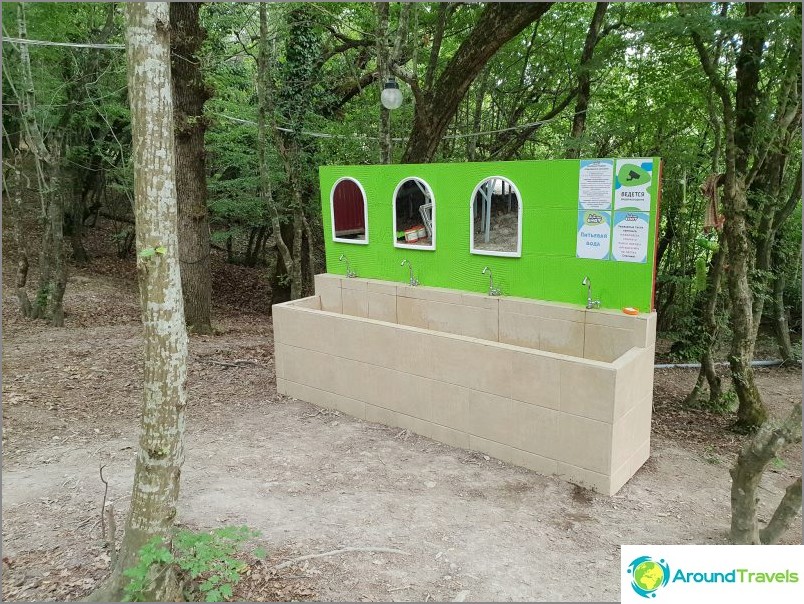 Washbasins with drinking water from a well 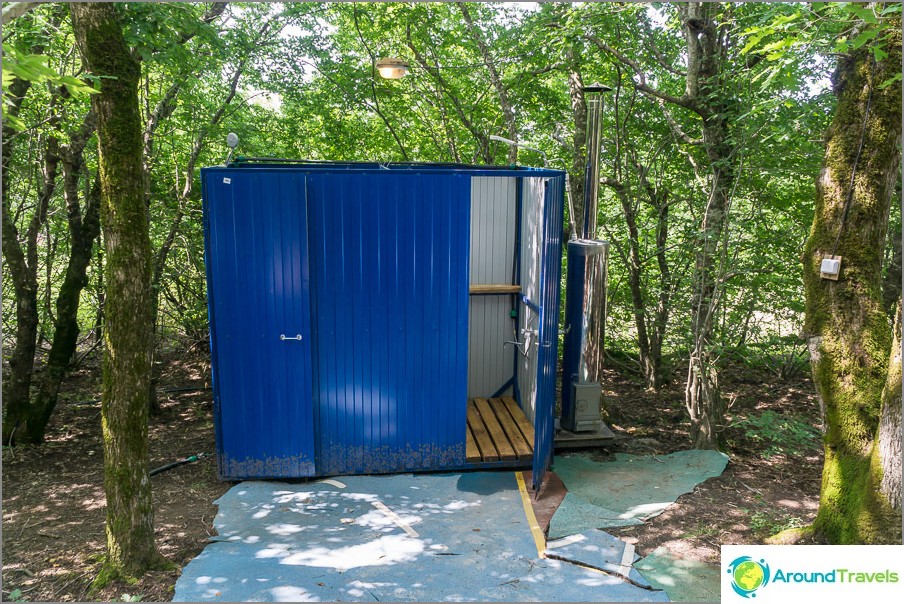 Shower with hot water (from the stove is heated) 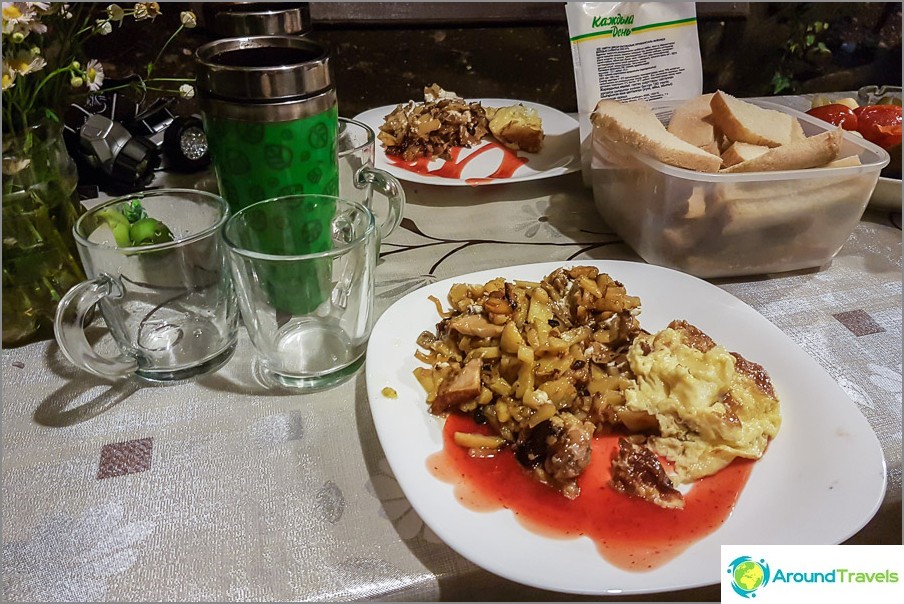 Hiking food - potatoes with mushrooms collected right there in the forest 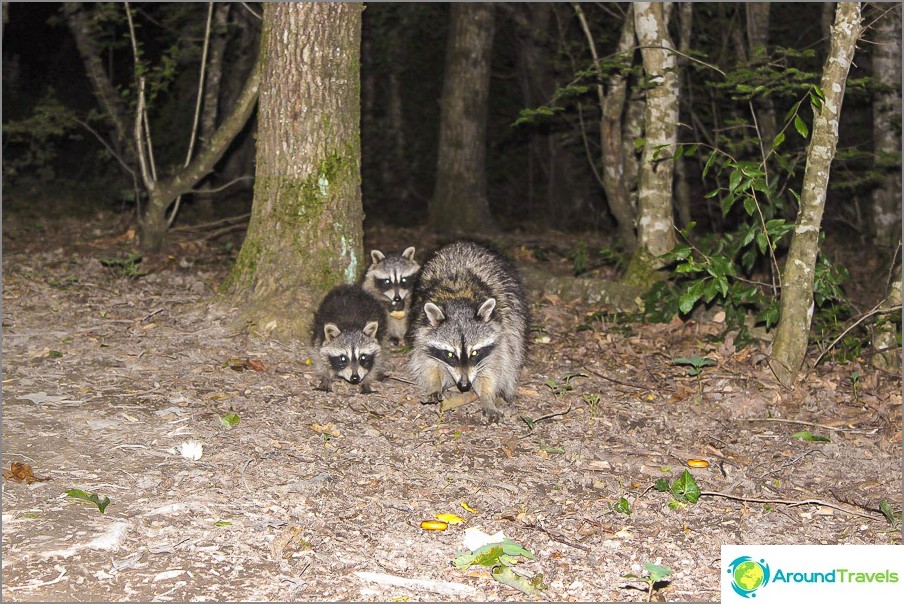 In the evenings, raccoons come to feast on the leftovers 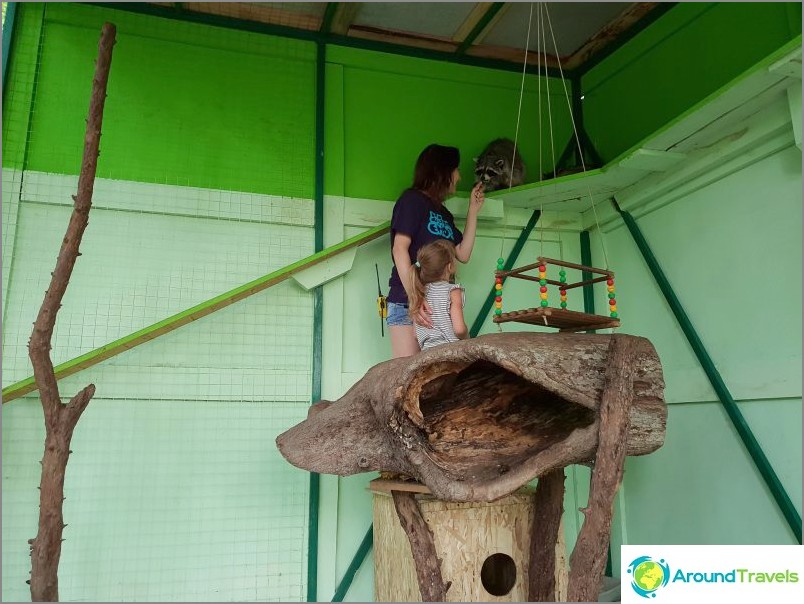 There are 2 of their own raccoon, almost tame 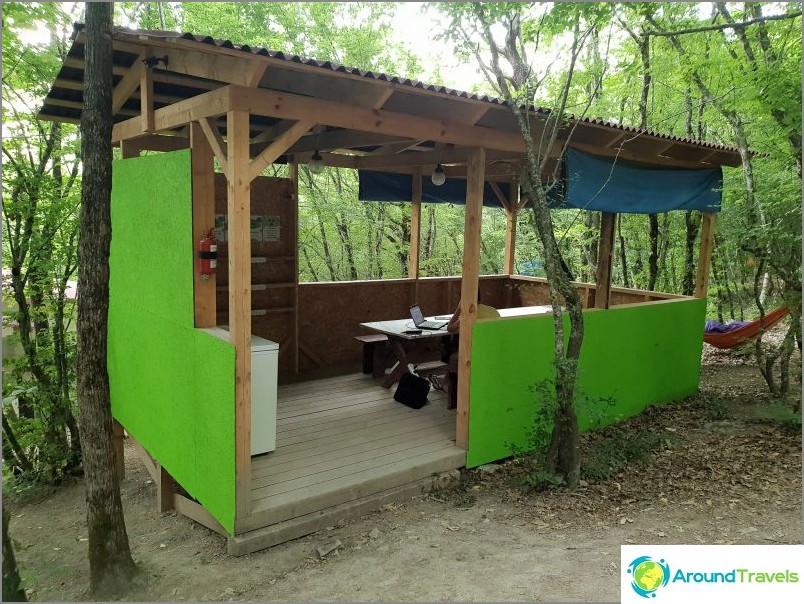 Gazebo with Wifi and sockets 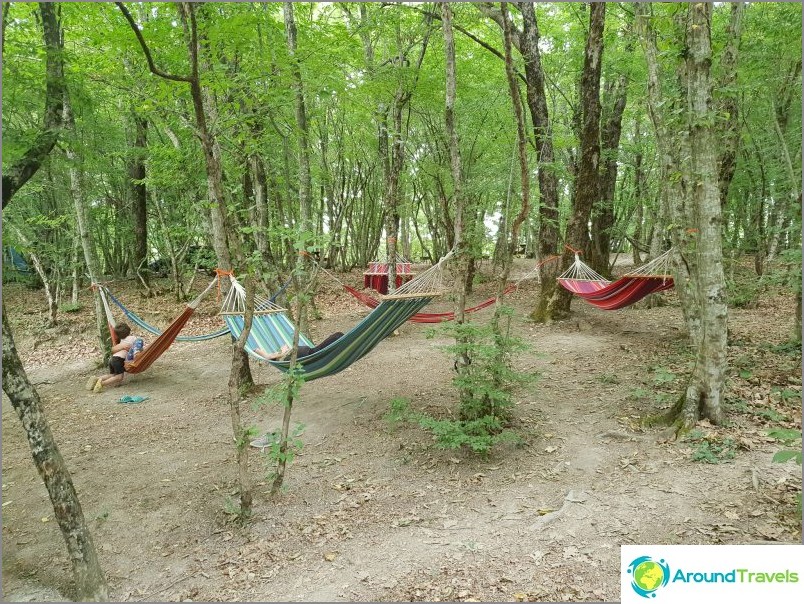 Near the gazebo clearing with hammocks 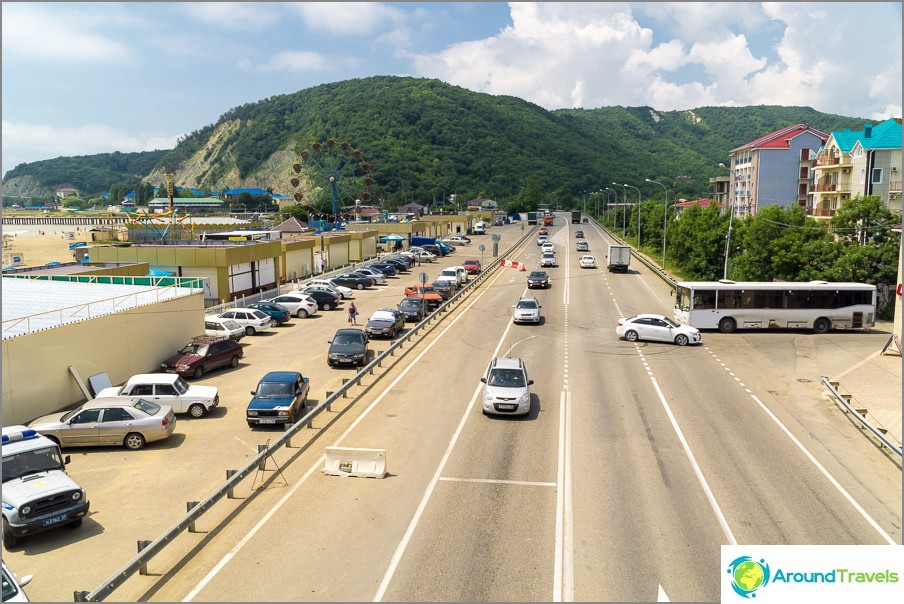 Lermontovo village near the campsite 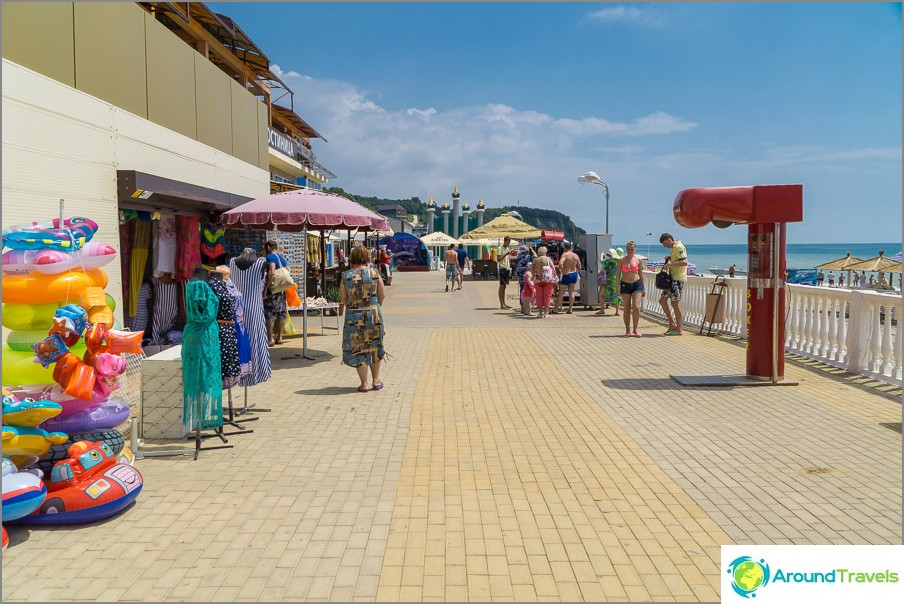 A small promenade in Lermontovo 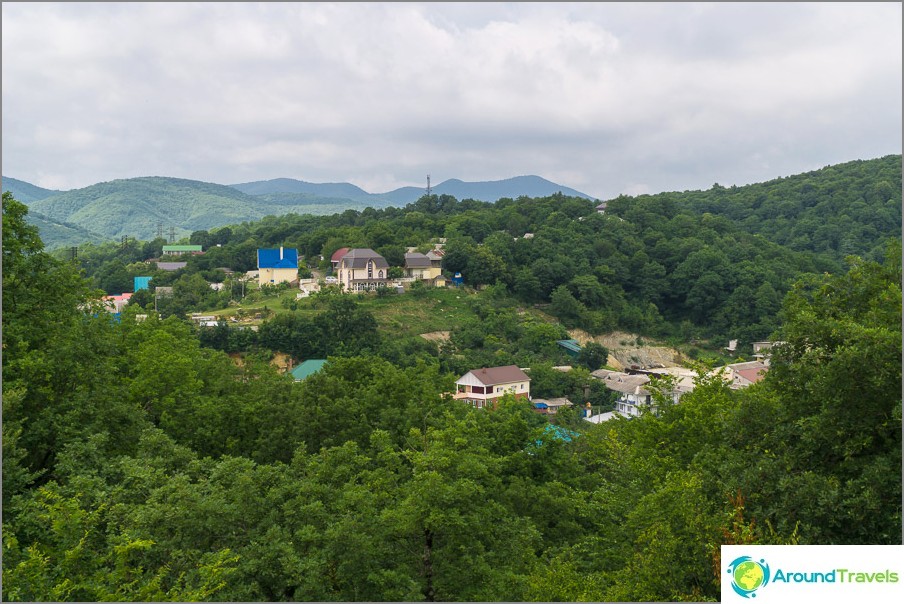 Camping Raccoon can be divided into 3 parts. Conventionally - because it is a single forest and there is no clear separation. So, in the first part, which is closer to the entrance, there are places with individual sockets (payment of 100 rubles / day for the outlet). You can use for low-power devices, places with lighting. Nearby all communications, but the fields are more densely populated.

In the second part, the glades are quieter andalone, and in the third part (the fields have the appearance of forest edges) there is a feeling that you are standing alone in the forest. When I saw these sites, I immediately had a desire to hold a Life-Trip meeting here. Well, or just come here with friends by several cars. 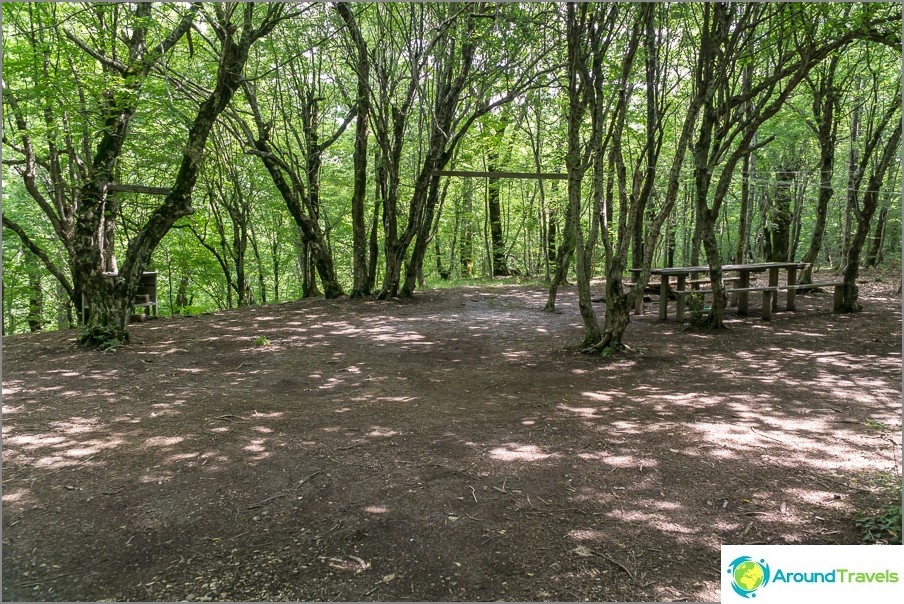 + Unlike many other campgrounds here do not charge extra for various services. Free of charge: water (drinking from a well), hot shower, recharge phones / laptops, Wifi in the gazebo.
+ For me, a big plus, that it is forbidden to include music here, I can not tolerate it. And there is a mode of silence from 11 pm to 7 am, which is also cool, drunk and noisy companies go by.
+ The whole civilization is very close, so just 10 minutes to the village of Lermontovo. Near Magnet, a small market, shops, a pharmacy. But at the same time camping is in the forest and in a secluded place.
+ The forest, though low, is shady, and on hot days at the campsite the Raccoon will be much more comfortable than at campgrounds on the beach without a single shadow (the tent brought with them does not save the situation much).
+ In some ways, I like the deciduous forest even more than the pine, you can walk barefoot and needles do not dig into the legs.
+ It is possible to walk on two beaches: wild and urban. Equally in time, 10-15 minutes.
+ Quite a large area and the tents of the neighbors will not rub against yours.

- The proximity of civilization is not only a plus, but also a minus. Like it or not, music from coastal cafes and some other noise will be heard, since Lermontovo is near.
- Camping is on an elevation, soreturning from the beach to it is not quite comfortable, there is quite a sharp rise. But the guys from the campsite organize a transfer and pick up from the bottom, so this is not really a minus.
- Located from the sea through the highway, that is, from the tent you will not see the sea.

Path to the wild beach

To the wild beach to walk about 10 minutes normalstep, I spotted. The path is not entirely obvious, so the campers always show it to everyone. First you need to go through the forest, then through the pipe under the highway, where you can make a screensaver for the James Bond film (only Bond should be quite low), and down the ladder we get to the wild beach of Lermontovo. It is usually cleared, but I was right after the storm, so I sketched wood and some of the benches and tables were made right away. 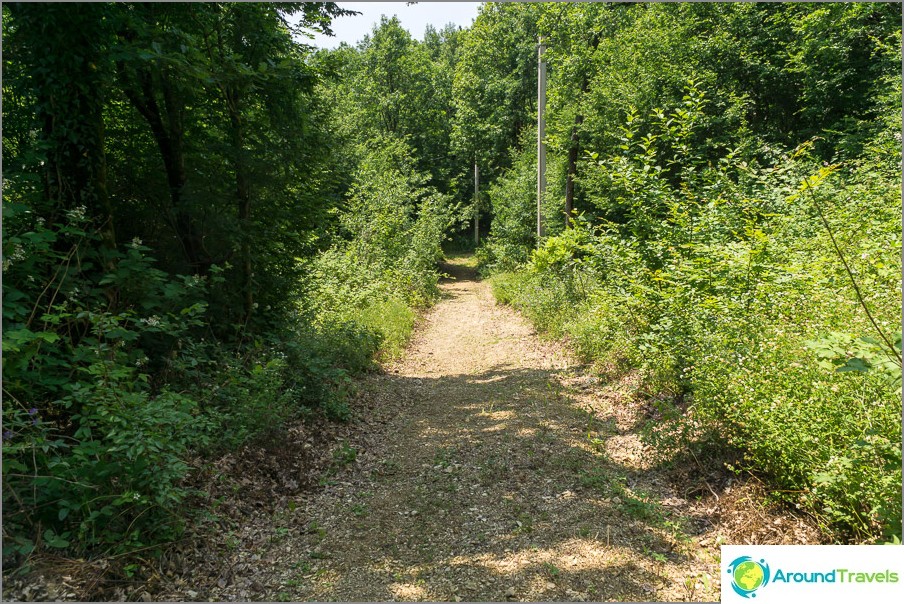 Part of the path passes through the forest 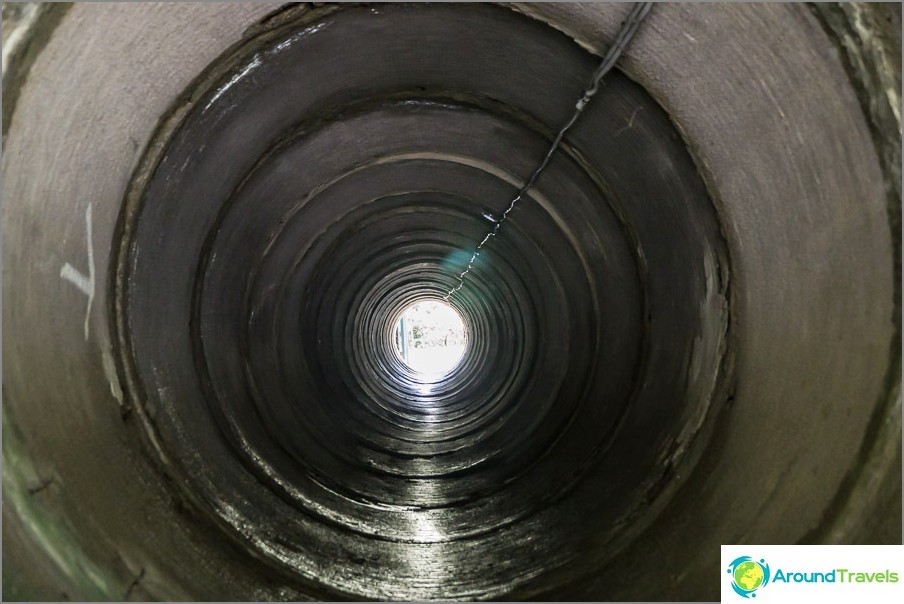 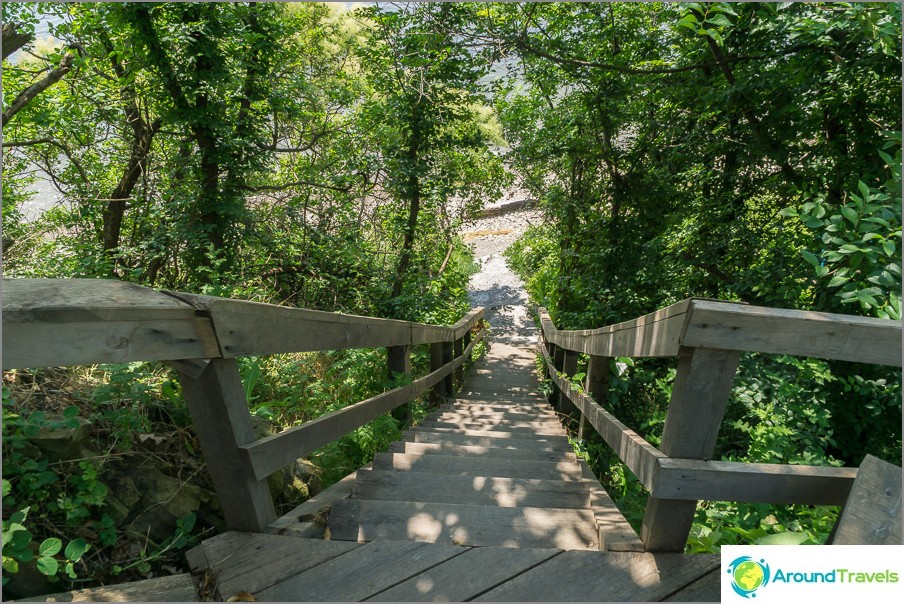 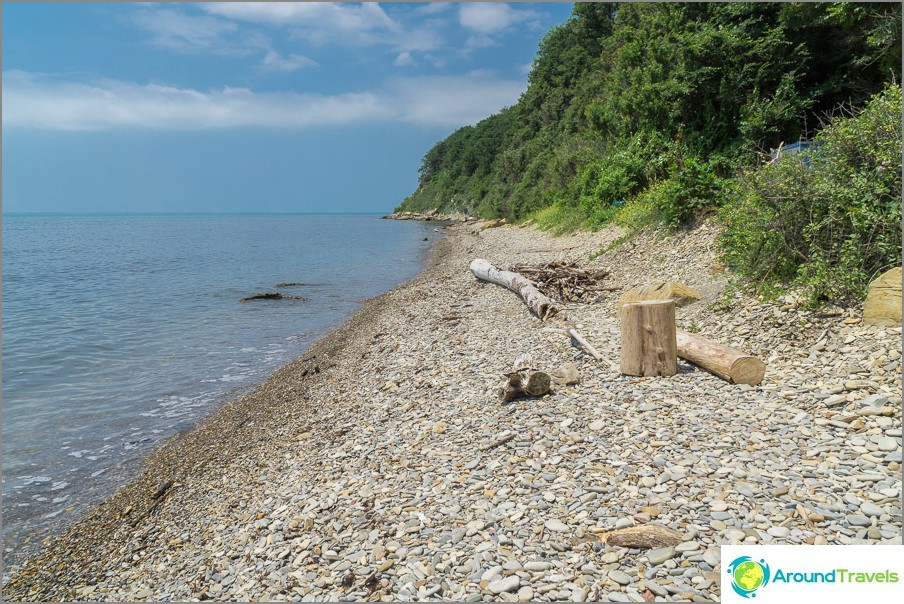 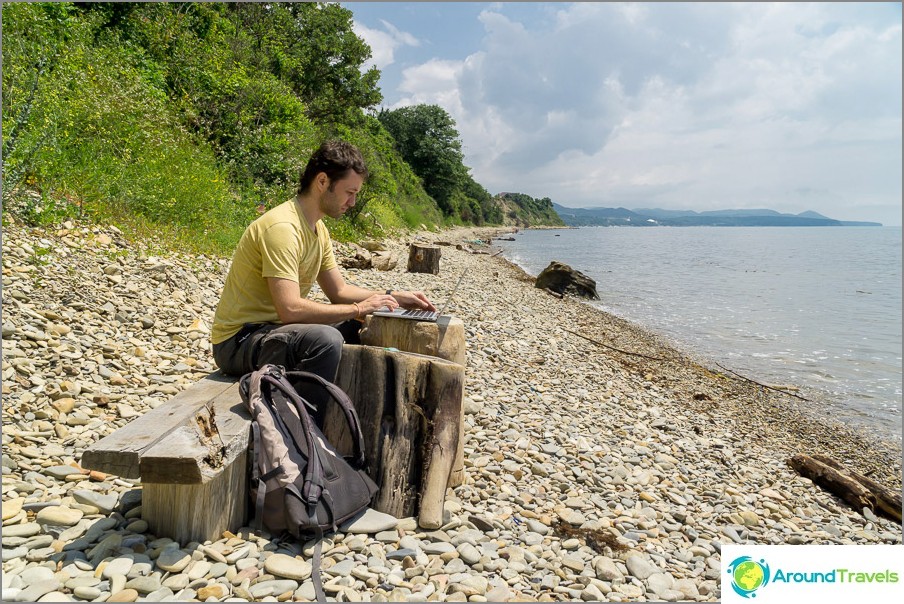 When there is no heat and bright sun, you can even work here.

Path to the central beach

To the city beach to go somewhere around 15 minutes. First along the gravel before descending to the village and further along the sidewalk. Further along the road there are two pedestrian crossings: a zebra and a pedestrian bridge. The beach is free, there are sun beds for rent. In the center of the beach there is sand mixed with stones, but more sand. Along the edges of the beach more stones. 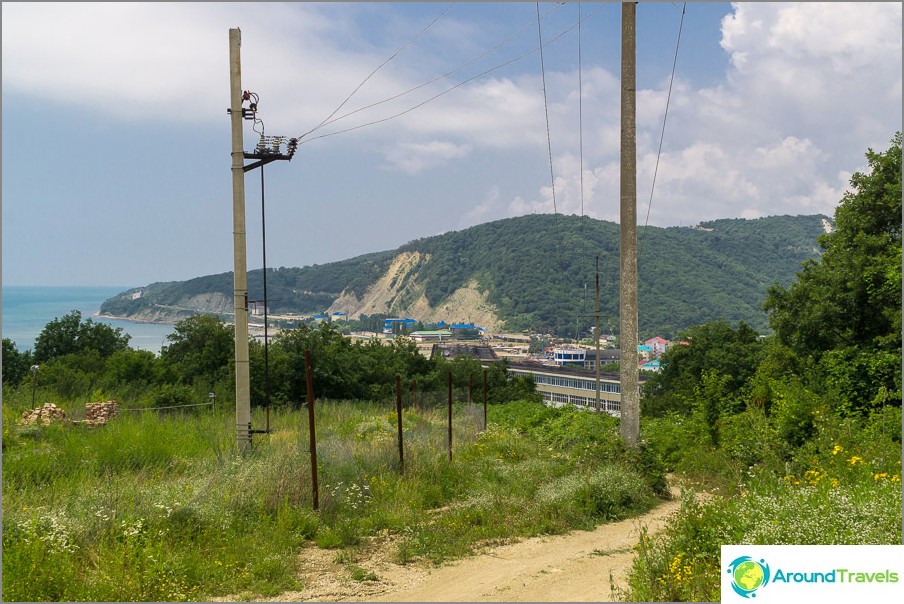 We leave the campsite on the gravel 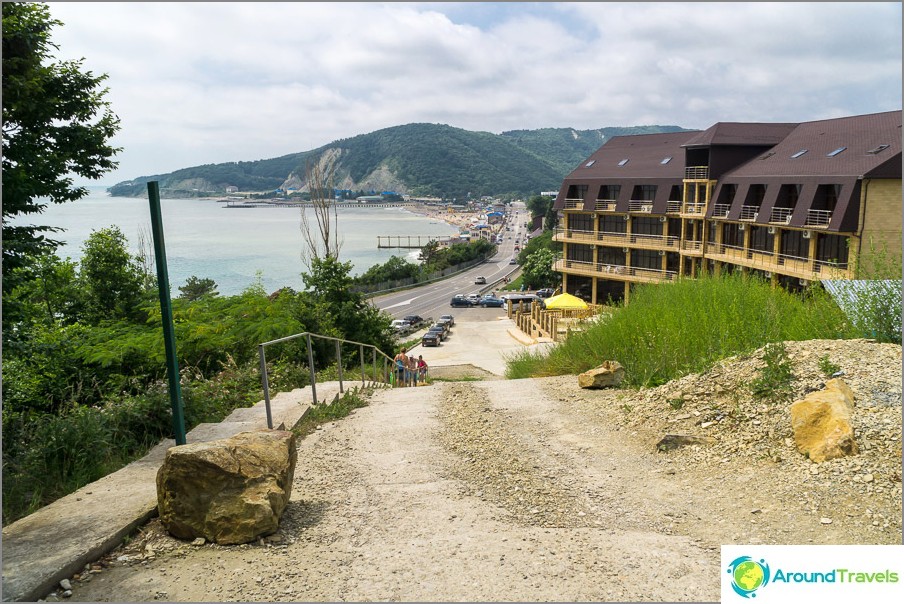 Get down to the village of Lermontovo 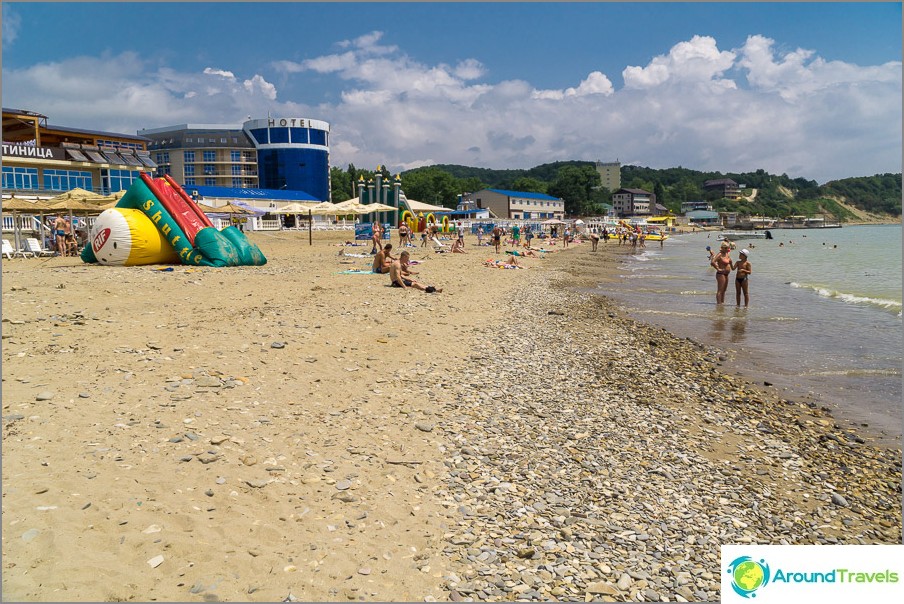 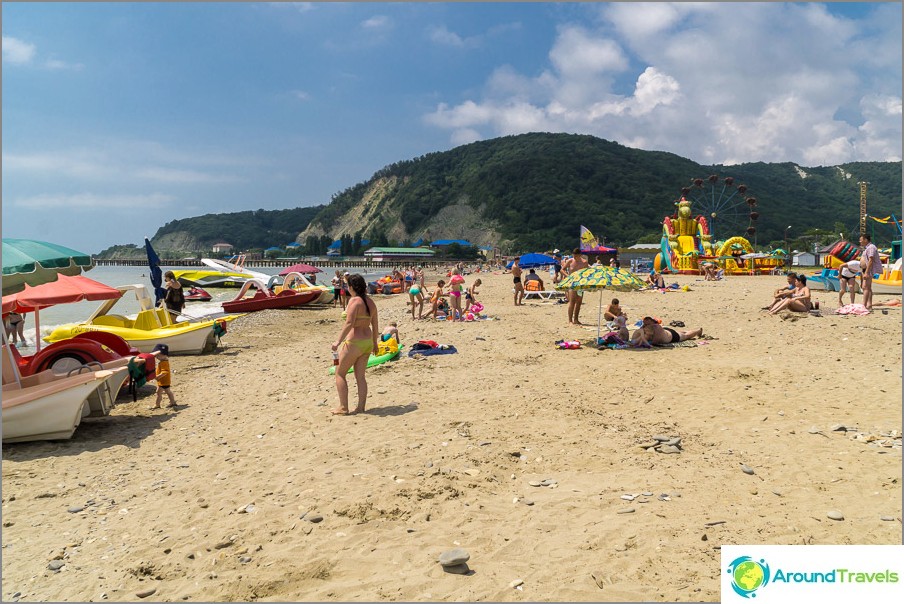 Tables with benches, barbecues, drinking water, hot shower, recharging devices, Wifi - for free.
A bundle of chopped firewood - 150 rubles, but you can collect firewood for free in the forest, there are still plenty of them.

See the campsite layout below.Raccoon, on it you can book a specific place with prepayment. It is possible to come without a reservation, then in August it may not be thick with a choice of places. All the details and questions can be asked in their official group in Vkontakte, or call the toll-free hotline 8-800-550-65-64. Respond promptly.

Camping is at the end of Lermontovo, if you gofrom Dzhubga. Around the middle of Lermontovo, you need to turn left (there are 2 turns possible through any) and go, guided by the point on the map below. Signs will appear at the end of the path closer to the camping. The road carriageway for any car.

It’s very long to explain with words, so it's easierjust go to the camping group in Vkontakte and find there the drawn path on the map, as well as a video of how to drive. I also know that they can pick up from Lermontovo or Dzhubga if you arrived on your own by bus or other transport.

Camping Raccoon-Lermontovo
Good camping on the hill and in the deciduous forest. Located in Lermontovo.
Read more.

Good camping on the hill and in the deciduous forest. Located in Lermontovo.More details.