Among the compact cameras have their representatives,which have the ability to high-speed shooting. In such cameras, electronic and optical nodes are reduced, due to which the shooting speed has increased. The FS10 camera belongs to such models. It has a fairly small body with a thickness of 16.3 millimeters, a small 2.5-inch display, hidden in the body of a 3-fold lens, which is fully protected from mechanical damage.

The camera has a 9.1-megapixel CMOS sensor, which has a maximum sensitivity of ISO 1600. 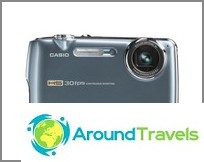 This camera has another special feature - prerecord, up to 30 frames remain in the memory of the device before pressing the shutter release button.

This model is available and high-resolution videoresolution of 30 frames per second (1280x720 pixels). When you press the Movie button during video recording, you can take a photo with a resolution of 6 megapixels.

With high-speed recording you can getgood stabilization of the camera and high-speed night mode, at the same time we get the optimal sharpness of the image, combining a series of sequentially captured images.

Interesting in this model and slow motion modewhile the camera continuously saves the current story to the buffer and plays it on the screen at a slow speed, the photographer at this time views all the events and presses the button with a convenient frame to save the image to the memory of the device. The camera is able to independently select the best pictures from the footage, automatically removing frames, where the model turned out with closed eyes.

In addition to the speed limit, there are more than 20 subject programs in the camera.

How to get from the airport and Bangkok to ...