Chinese temple in Pattaya - I recommend to see

A large complex of attractions, includingwhich Chinese temple and museum of Viharnra Sien is a fairly well-known place, where almost everyone who visits Pattaya goes to. Maybe I'm wrong, but it seemed to me, judging by the reports on the network.

In my opinion, first of all, it is worth seeingViharnra Sien (Viharnra Sien) and the Mondop Temple (Phra Maha Mondop Phutthabat) on the hill, but the Wat Yang complex can be missed. In addition to the temples in this place there is a small lake with a bike path along the coast and beautiful, but neglected gazebos.

Thailand and China are neighbors and they are connected quiteclose long-term relationship, there are a lot of immigrants from China in Thailand. Therefore, the presence next to Pattaya Chinese temple is not surprising. But Viharnra Sien is still a very unusual place.

Wat Viharnra Sien or Anek Kuson Sala or "HouseThai-Chinese Friendship ”is the name of the temple museum in the southern suburb of Pattaya, the building of which is made in a very Chinese style, which is not very typical of Thailand.

It is located next to the temple complex.Wat Yang and not far from the Golden Buddha Mountain, Khao Chi Chan. The peculiarity of the temple is that in fact it is a museum dedicated to Thai and Chinese history and culture, and it contains a large number of ancient, very valuable pieces of art from China.

For example, there are some authentic figures.terracotta warriors from the famous Terracotta Army, Chinese ceramics of different dynasties, musical instruments, paintings, the emperor's golden throne, items decorated with precious materials. The museum’s especially valuable exhibits were donated to the King of Thailand, Rama IX, by the Chinese government as a sign of friendship and respect.

The museum was founded by Mr. Sa-nga Kulkobkiat,who was born in Thailand and grew up in China. In 1987, he began working on the implementation of his project, which was completed in 1993. Now the sculpture of the creator of the complex can be seen on the right side of the main entrance. On the granite slab the story of the life of Mr. Sa-nga Kulkobkiat is carved. 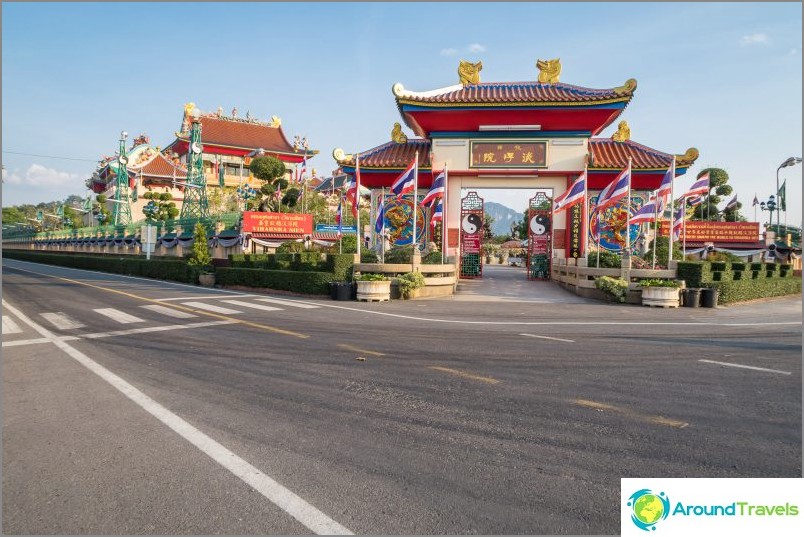 Entrance to the temple, view from the road 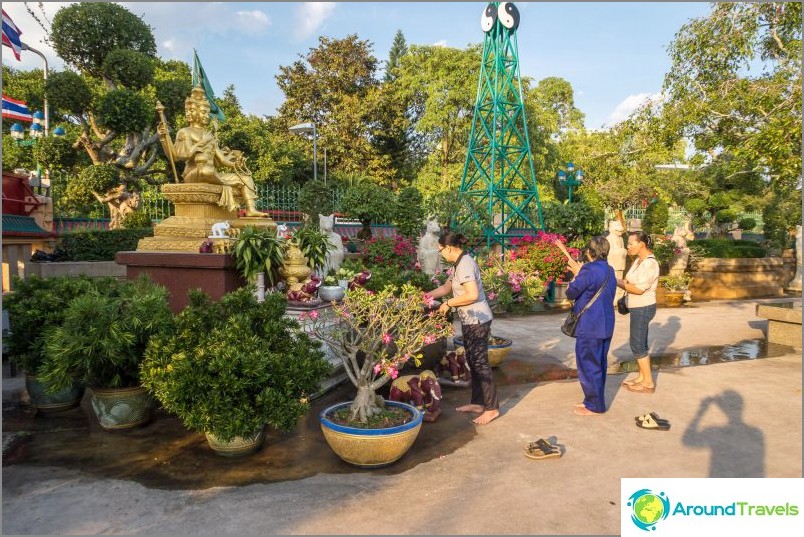 A small garden in the temple 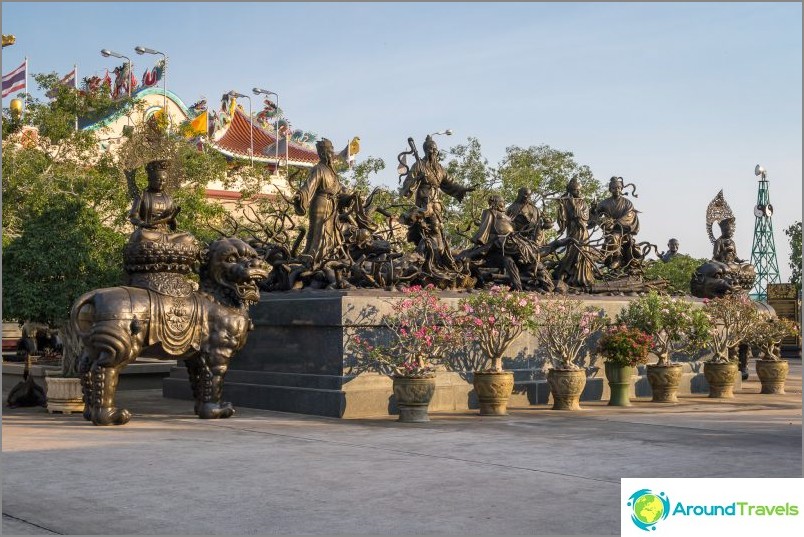 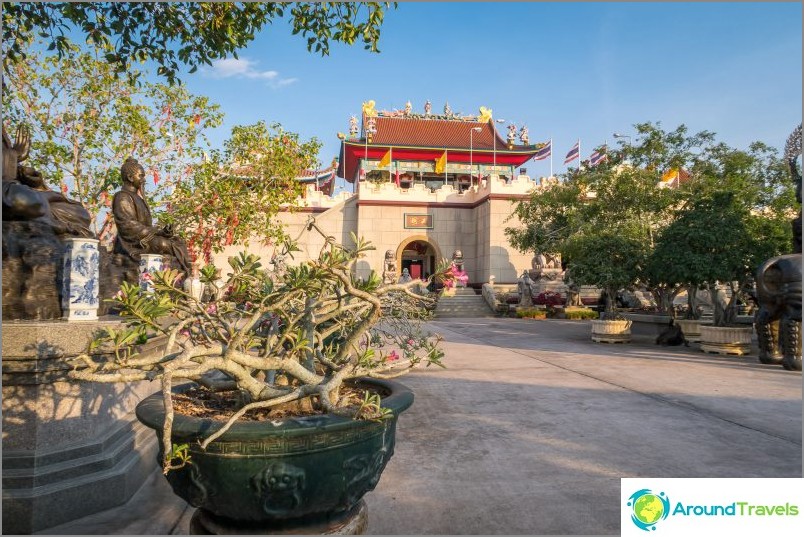 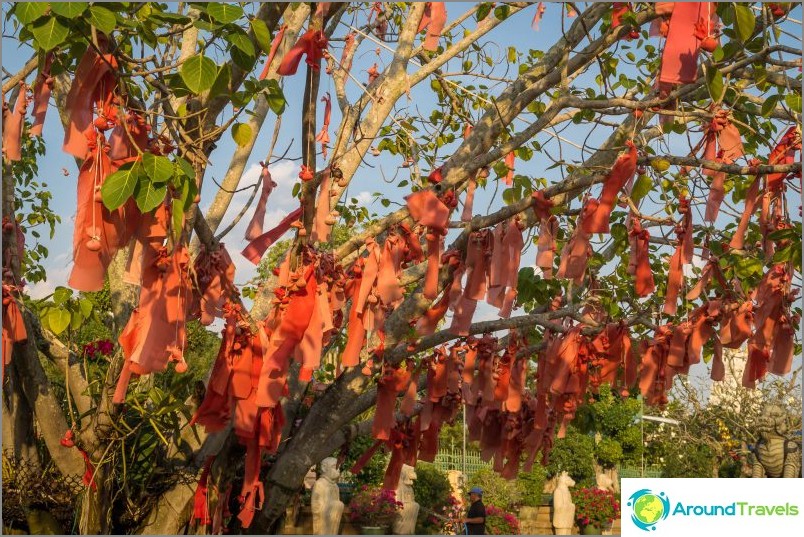 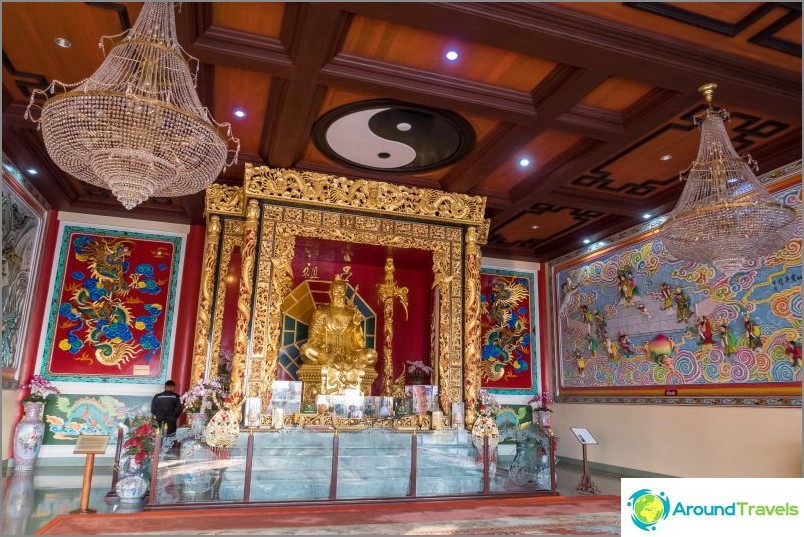 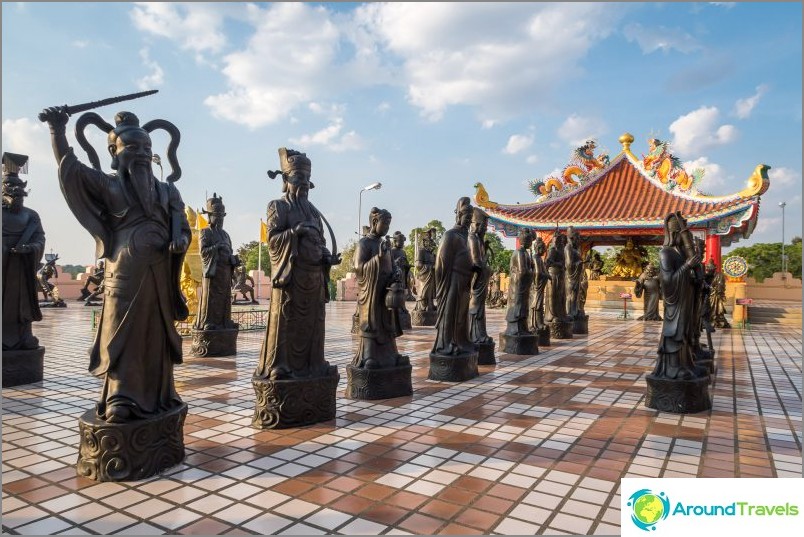 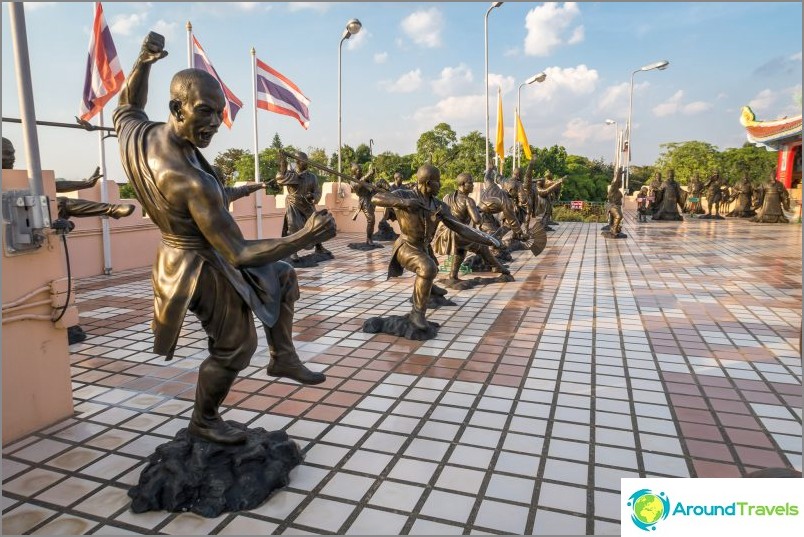 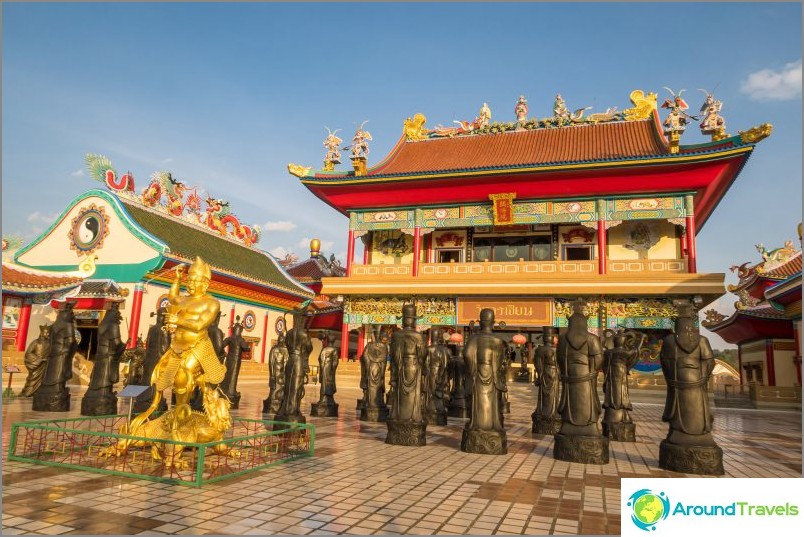 The building of the temple museum consists of three floors, pluscourtyard with flowers and bonsai and an extensive terrace. Everywhere, both before the entrance to the complex both on the territory and inside there are a lot of interesting and unusual statues. From lions, the same in appearance, which in Beijing guard the entrance to the royal palace, ending with the figures of the Shaolin warriors in combat poses.

There is a figure of the god of fortune and wealth, statuesbodhisatvs, reduced copies of royal chariots, dolls, the layout of the Chinese wall and the terracotta army, paintings, chic colorful wall panels, layouts of traditional Thai housing and much more.

If you want to know more about something, next toThe museum exhibits have signs with signatures. The entire third floor of the building tells about the life of Gautama Buddha and Thai culture. There are interesting paintings on the walls and a large golden statue of Buddha in the center of the hall.

Anek Kuson Sala can be called a museum of culture andA kind guide to the religions of the Asian region - Buddhism, Taoism and Confucianism. The name can still be translated as “a place with an atmosphere like in heaven” or “the abode of the saints” - and there are indeed many statues of people and deities worshiped by the adherents of Buddhism and Taoism. 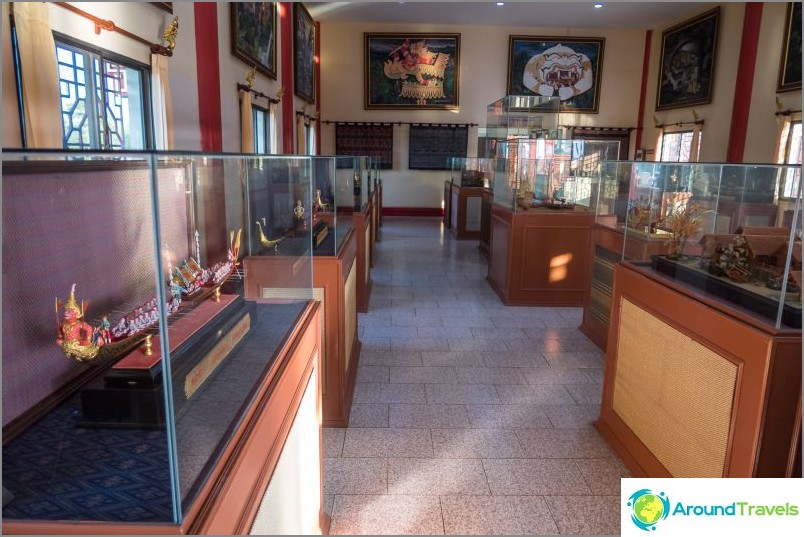 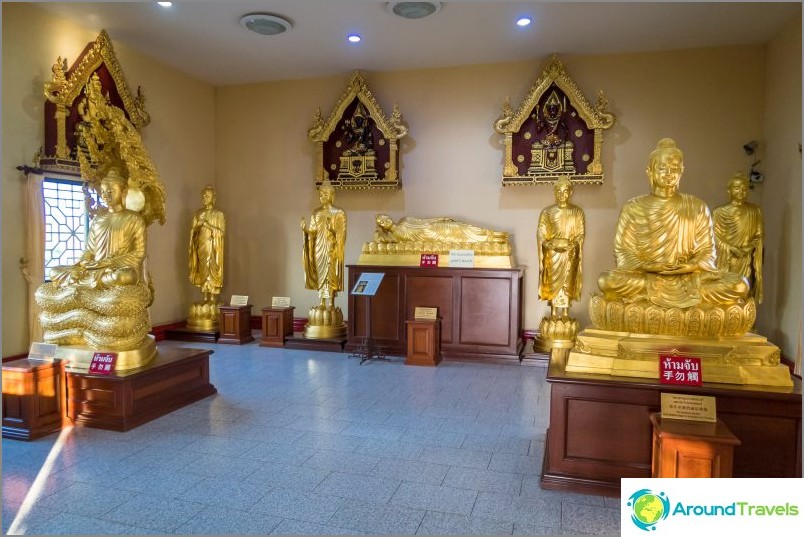 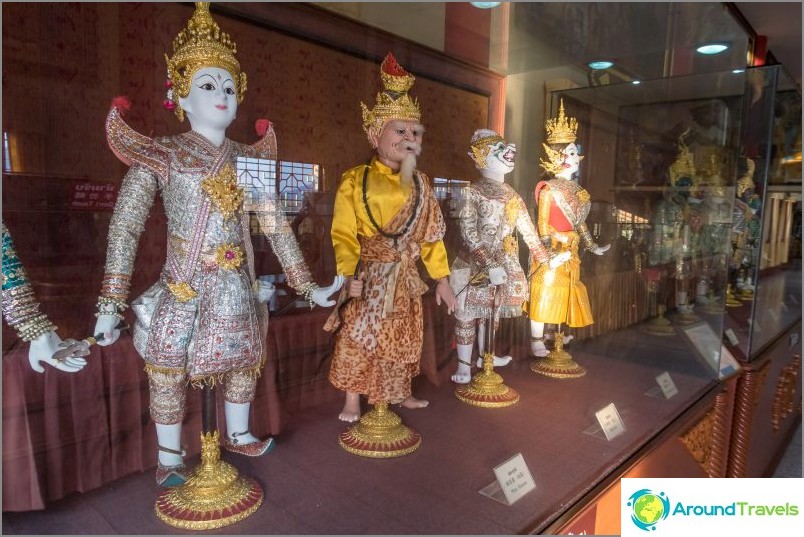 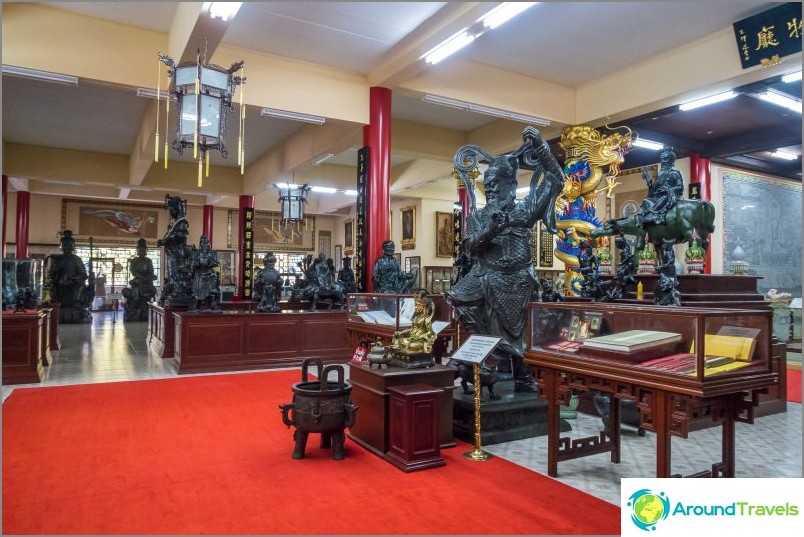 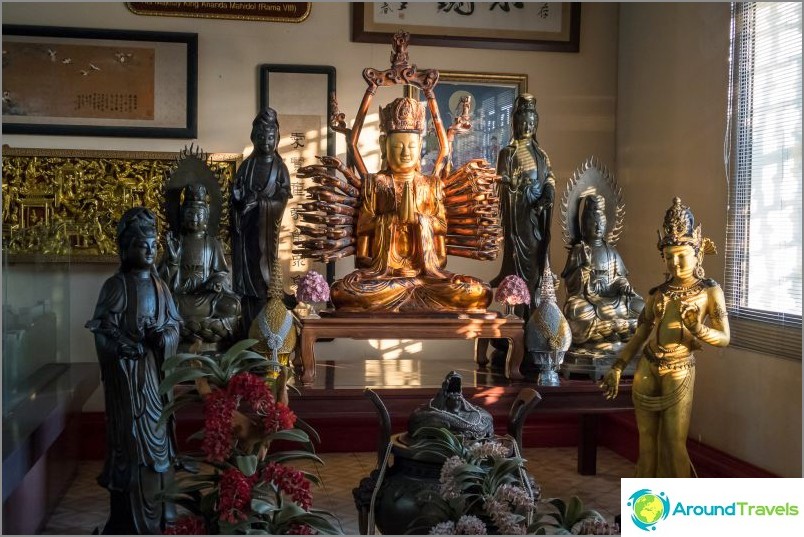 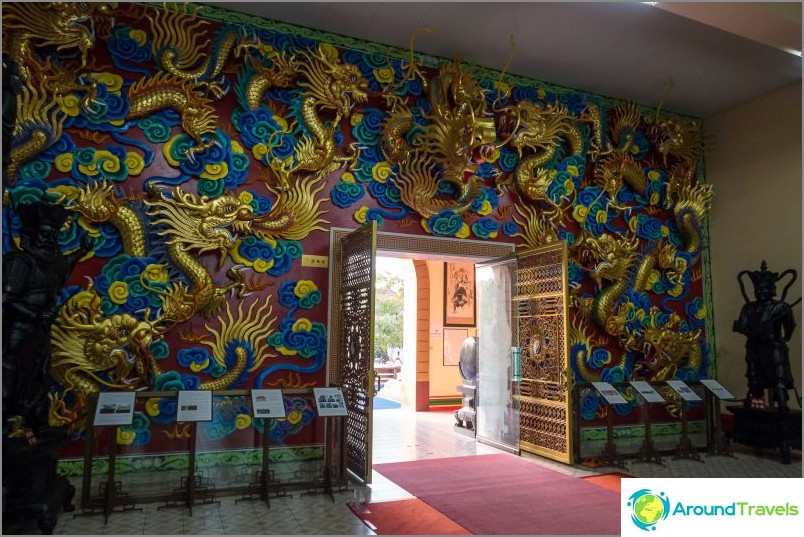 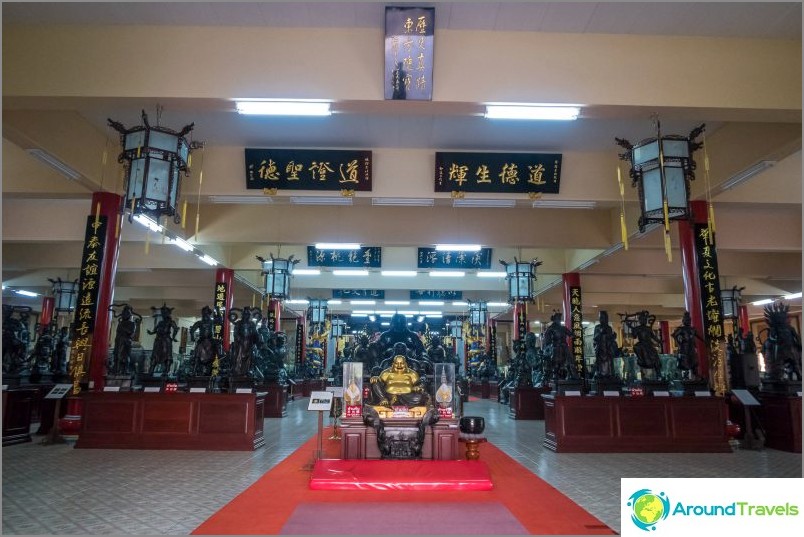 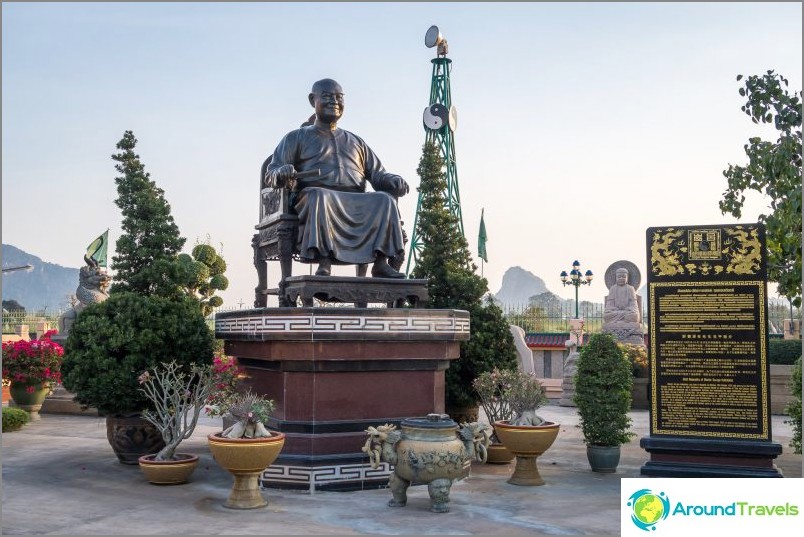 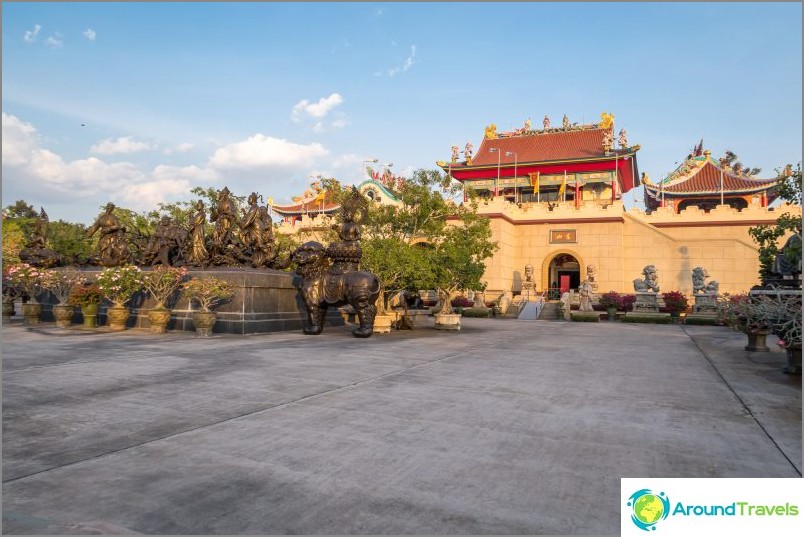 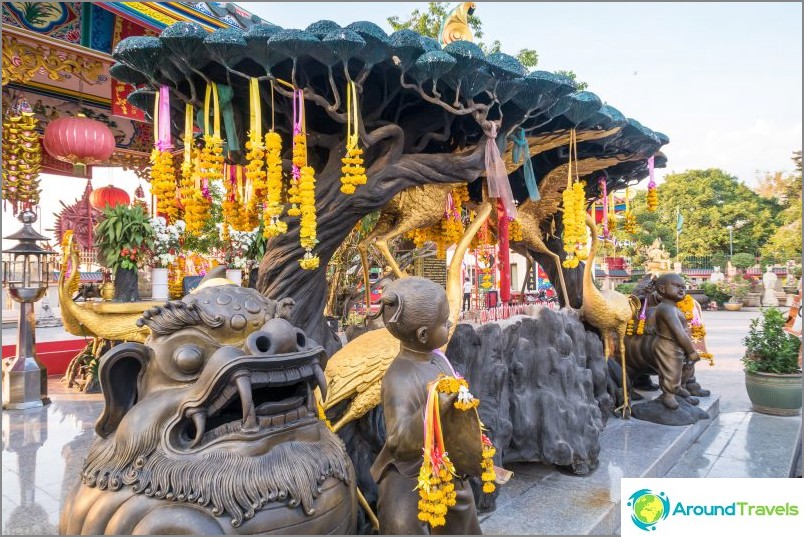 And the temple would have the name “million and one statue” - figures of all sizes, styles and textures and materials from teak and jade to bronze and granite, there is really very, very much.

The territory of the complex is very clean, well-groomed and bright. Especially in clear sunny weather: flowers, neat trees, bells on bright scarlet ribbons, colorful dragons and ornaments on buildings.

It is quiet and peaceful (when there are no organizedgroups with Chinese tourists), the atmosphere is pleasant, and has a leisurely walk, considering the statues and exhibits. From the upper floors and the terrace there is a nice view of the reservoir, next to which is the temple, green surroundings with picturesque hills, the mountain of the Golden Buddha and the silhouette of Pattaya in the distance.

Near the temple, souvenirs and food are sold, there is a simple and inexpensive cafe on the territory.

Entry is 50 baht (children free). Cashier is to the left of the entrance.

To go to the temple, you have to take off your shoes. But the large terrace with the statues of warriors is located in the open air and during the daytime, the sun-hot tiled burns your feet, so it would not be superfluous to take your socks with you to calmly walk and look at all the figures.

Since this is still a temple, it is better to choose clothes that are not exactly beach, covering shoulders and knees. Also on the territory of the temple is not allowed to bring their food and drinks.

The Viharnra Sien Museum Museum is located next door.with the temple complex Wat Yang and not far from the Golden Buddha Khao Chi Chang, about 20 km south of the center of Pattaya. You can get on your own transport, taxi or as part of the tour.

But you can also try to drive partly onby public transport: take a white tuk-tuk going to Sukhumvit towards Sattahiba (travel costs 20 baht), get to the left turn to Wat Yan (turn to Greta farm and Ban Dusit) or a little further, turn to the Golden Buddha (on the opposite side of Sukhumvita will be the BMW Mini saloon), and then catch a taxi.

In Thailand, catching a transport is not difficult. There are many attractions in the area where Viharnra Siena is located, so taxi drivers drive there regularly.

If you want to go with a tour and guide to the templeViharnra Siena is delivered with the tour "Wat Yang and the village of long-necked women" or "Khao Chi Chang and Wat Yan", can be specified in a specific travel agency. The easiest way to visit a church on your (rented) transport is that there will be plenty of time to take a walk and see everything.

Chinese temple and museum
The interesting Chinese temple of Viharnra Sien, hea museum in which you can see the ancient terracotta warriors, the installation of the great Chinese wall and many relics and statues. On the third floor, around the perimeter of the walls, there are paintings depicting the story of the Buddha’s life.
More about the temple. 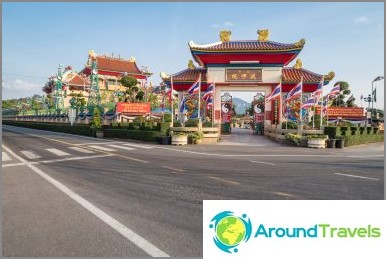 The interesting Chinese temple of Viharnra Sien, hea museum in which you can see the ancient terracotta warriors, the installation of the great Chinese wall and many relics and statues. On the third floor, around the perimeter of the walls, there are paintings depicting the story of the Buddha’s life. Read more about the temple.